Accessibility links
Trump Says Islamic State Leader Abu Bakr al-Baghdadi Has Been Killed In A Raid The president said the U.S. had been searching for Abu Bakr al-Baghdadi for years. Capturing or killing Baghdadi has been "the top national security priority" of the administration, Trump said Sunday. 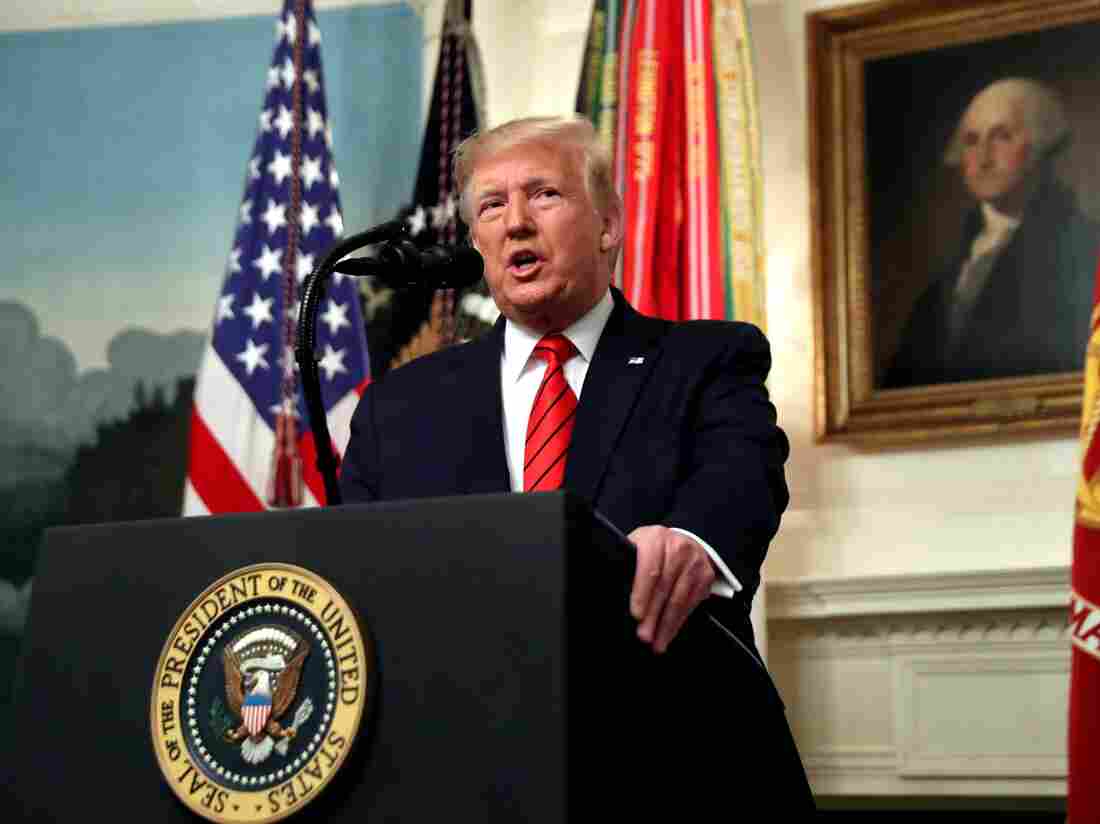 President Trump said on Sunday morning that capturing or killing Islamic State leader Abu Bakr al-Baghdadi has been "the top national security priority" of his administration. Above, Trump speaks in the Diplomatic Room of the White House on Sunday. Andrew Harnik/AP hide caption 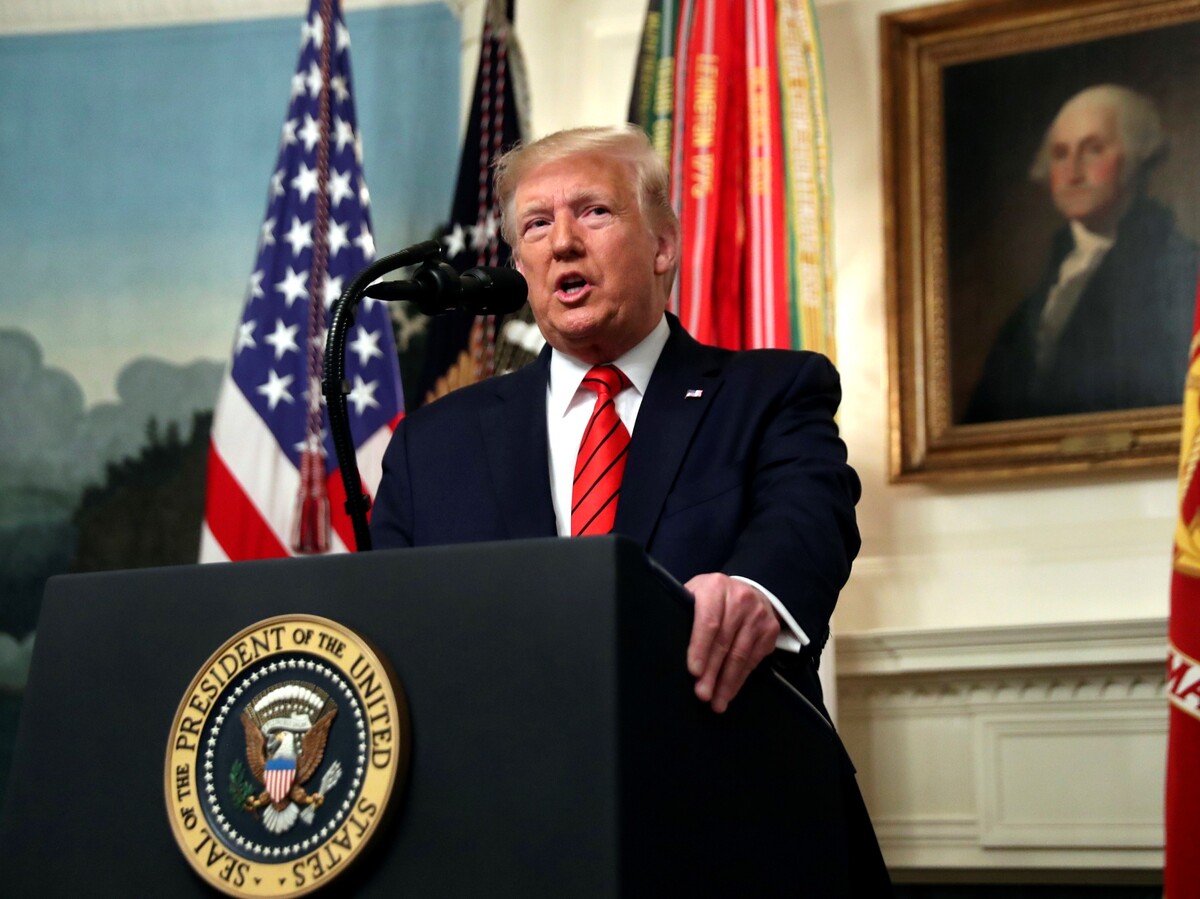 President Trump said on Sunday morning that capturing or killing Islamic State leader Abu Bakr al-Baghdadi has been "the top national security priority" of his administration. Above, Trump speaks in the Diplomatic Room of the White House on Sunday.

President Trump says that Abu Bakr al-Baghdadi, the founder and leader of the Islamic State, has been killed after a U.S. special operations mission targeted him in northwest Syria. Trump declared that U.S. forces have brought "the world's No. 1 terrorist leader to justice."

Describing a dangerous and daring nighttime raid, the president said after eight helicopters flew across Russian airspace, U.S forces located their target and blew a hole in a wall of Baghdadi's compound, fearing the main entrance was booby-trapped.

Trump said that with military dogs in pursuit, Baghdadi desperately fled to a dead-end tunnel of the compound, which was located in Idlib province in northwest Syria along the border with Turkey.

Baghdadi, who was with his three young children, detonated a suicide vest, collapsing the tunnel and killing himself and his children, Trump said, noting that on-site DNA tests were completed to confirm Baghdadi's identity.

Before his death, Trump said, Baghdadi was "whimpering and crying and screaming all the way."

The White House released a photo showing Trump, Vice President Pence and top military advisers in the Situation Room, where Trump said he viewed the raid in real time, something he compared to "watching a movie."

Trump said no U.S. troops were killed or injured in the raid. The president noted that 11 children were rescued from the compound and that an undisclosed number of Baghdadi's associates surrendered.

The State Department had a $25 million bounty on Baghdadi, and the U.S. had been hunting him for years.

"Capturing or killing al-Baghdadi has been the top national security priority of my administration," Trump said on Sunday morning.

"He was a sick and depraved man, and now he's gone," said Trump in remarks.

Trump, who is facing an impeachment inquiry over allegations that he abused his office to help himself politically, spoke in dramatic and incendiary language about the killing of Baghdadi, taking more than 40 minutes of questions from reporters and describing the raid in boastful terms.

At one point, Trump even suggested that Baghdadi's death was more important than the mission ordered by President Obama in 2011 that resulted in the death of al-Qaida leader Osama bin Laden, the mastermind of the Sept. 11 terrorist attacks.

Trump then repeated his false claim that he predicted bin Laden was a threat before anyone else. "If they would've listened to me, a lot of things would have been different," Trump said Sunday.

"Something very big has just happened!"

On Saturday evening, Trump hinted that the announcement was coming, tweeting: "Something very big has just happened!"

The White Helmets, a group of volunteer rescue workers who have operated in the Syrian civil war, provided NPR with a video of what the group says was the site of the attack, including rubble surrounding what appears to be a large bomb crater. 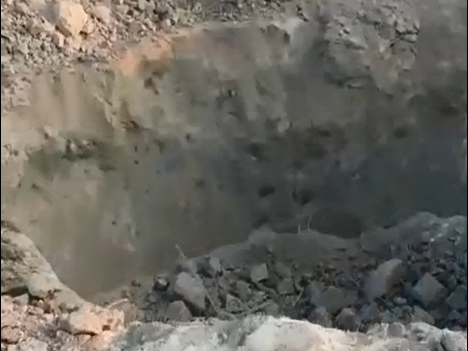 The Syrian Observatory says eight helicopters and a warplane belonging to U.S.-led coalition forces fighting ISIS struck an area north of the Syrian city of Idlib, close to the border with Turkey. Heavy strikes targeted ISIS positions for about two hours, with militants firing back at helicopters. The group says many people were wounded in the attack.

A White Helmets official told NPR that a two-story building was targeted in the strike. In the video, the site appears fairly isolated, surrounded by a grove of trees, a few homes and desert mountains.

Successful& historical operation due to a joint intelligence work with the United States of America.

Experts have cautioned that the killing of a leader of a terrorist organization does not represent the defeat of the group or its violent ideology. Military officials say the Islamic State has sleeper cells around the world that could regenerate, while others associated with the group operate in the shadows along mountainous and desert areas in parts of Syria and Iraq.

Baghdadi had been reported killed several times before, including in announcements by Iraq and Russia. He was believed to have been hiding in the desert near the Syria-Iraq border.

His last apparent video appearance was in April, a month after U.S.-backed forces declared the end of the ISIS "caliphate" and the defeat of the last remaining territory the group held in the Syrian city of Baghouz.

Baghdadi's actual powers of command and control had been greatly diminished since the U.S. and coalition forces routed ISIS from its hold on large swaths of territory in Iraq and Syria, though he had remained symbolically powerful.

At the Kurdish-run al-Hol camp in northeastern Syria a few months ago, some of the Iraqi and Syrian wives of ISIS fighters told NPR that they were waiting for Baghdadi to reappear and were confident he would revive the caliphate.

'I Want To Go Back': The Yazidi Girls Who Did Not Want To Be Rescued From ISIS

Baghdadi's most notable public appearance came five years ago, near the height of ISIS' power in Iraq and Syria. He spoke at the Great Mosque of al-Nuri in Mosul, Iraq, in July 2014, declaring himself caliph of the new Islamic State.

At its height, ISIS ruled over 8 million people in territory the size of Great Britain, with its capital in Raqqa, Syria.

The group rose to prominence for its gruesome violence, releasing videos of beheadings and burning people alive. It publicly beheaded, crucified and threw people off buildings. The group forced thousands of women and children from Iraq's Yazidi minority into slavery amid an ISIS campaign of genocide against the group. Yazidi women and girls were kept as sex slaves for years.

It attracted tens of thousands of foreigners, many from the West, and inspired terrorist groups around the globe. The group even established a quasi-government, with administrative functions, courts and police.

U.S. forces declared an end to ISIS' self-declared caliphate in March. But experts fear the group's resurgence now that Trump has announced a pullout of U.S. forces from Syria, with dozens of ISIS fighters escaping from Kurdish custody in the last month.