Accessibility links
Elizabeth Warren Supports Medicare For All, But Some Say She'll Compromise Warren supports mandatory "Medicare for All" that would eliminate private insurance. But there's a perception among some supporters that she's willing to compromise on the issue. 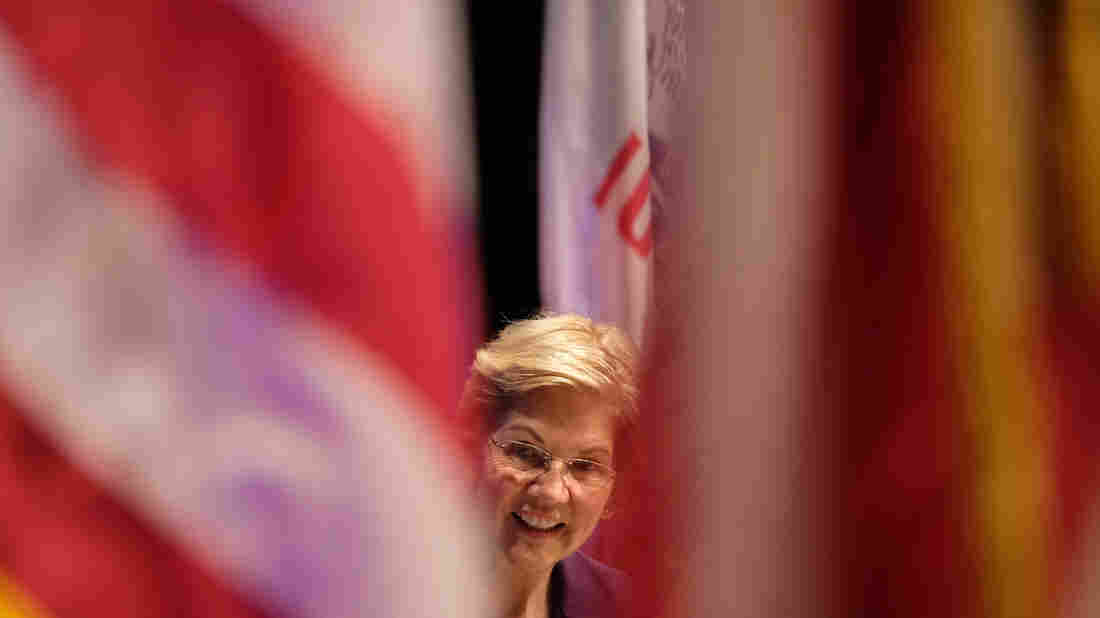 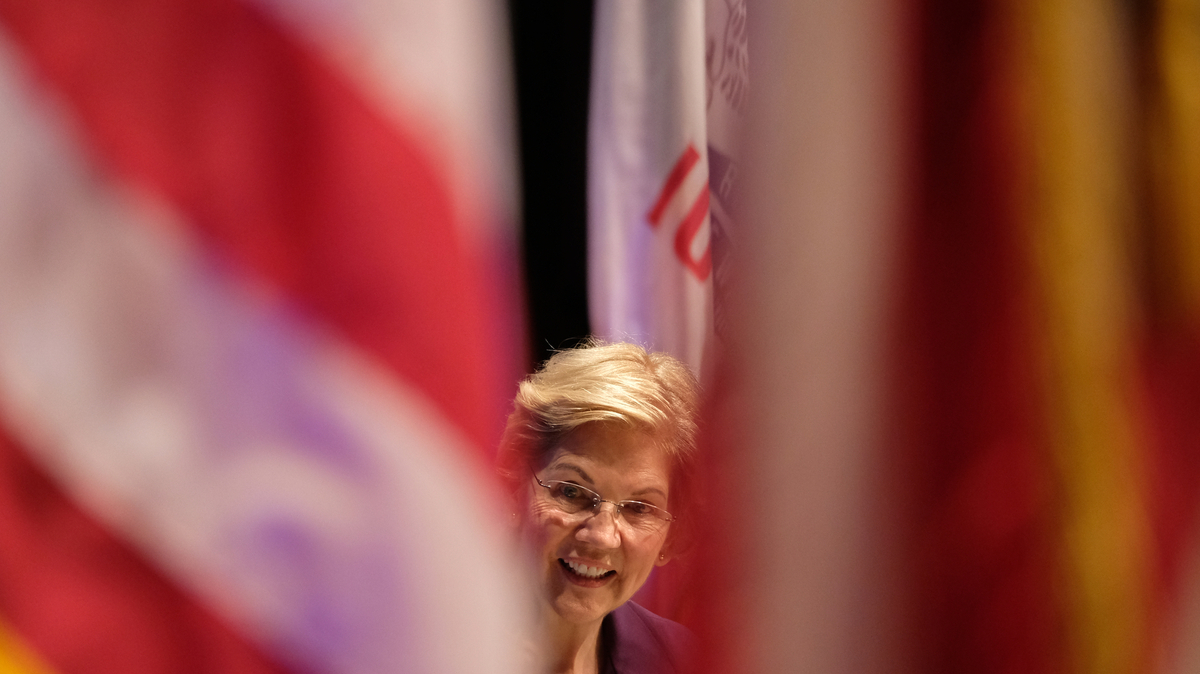 Sen. Elizabeth Warren has built a reputation as the presidential candidate with a plan for almost anything. Plans are her brand, so much so that her campaign shop sells T-shirts proclaiming "Warren has a plan for that."

But the Massachusetts Democrat has not rolled out a health care plan of her own. Instead, she has insisted "I'm with Bernie on Medicare for All." (Recently, after weeks of being hounded by both journalists and her opponents, Warren announced that in the next few weeks she'll release a plan that outlines the costs for "Medicare for All" and how she intends to pay for it.)

Earlier in this campaign cycle, Warren referred to Medicare for All as a "framework" and seemed open to alternatives, telling CNN's Jake Tapper that there could be a role for private insurance.

But Warren has also publicly tethered herself to Vermont Sen. Bernie Sanders' Medicare for All plan, and on the debate stage this summer she raised her hand in support of eliminating private insurance.

In her academic work, Warren has long pointed to health insurance instability and high medical costs as a major cause of bankruptcy. In 2008, she co-authored a book chapter that referred to universal single-payer health care as "the most obvious solution." But when that statement surfaced, and she was asked about single-payer during her 2012 Senate challenge to Scott Brown, she focused on cementing the then-newly passed Affordable Care Act.

Some voters and old colleagues are convinced that Warren is not as resolute on health care as Sanders, perhaps because of that historic willingness to aspire to a progressive goal, but be open to other options if the goal isn't politically acceptable.

That flexibility might be a perception, but the frequency with which people bring it up is noteworthy.

"I think we need to improve Obamacare, have a public option, that's the better way to go," Donna Mombourquette said as she grabbed popcorn in between candidate speeches at the New Hampshire Democratic Party state convention last month.

Mombourquette, a New Hampshire state representative, said she considers Sanders too "far to the left," particularly on health care. But Warren, who supports the same idea, is one of her top two choices.

"I guess with Elizabeth Warren, for some reason, I think that she's probably gonna be more open to moderating her positions to bring in more voters," said Mombourquette, who recently endorsed South Bend, Ind., Mayor Pete Buttigieg, but insists she still really likes Warren.

"That inconsistency is hurting"

While some of Warren's fans might interpret her lack of health care details with their own positive spin, her opponents have not.

"Your signature, senator, is to have a plan for everything. Except this," Buttigieg told Warren in the last Democratic debate as he pressed her over her refusal to concede that Medicare for All would require raising taxes on the middle class.

Public opinion polling has consistently shown that a public option, which would create a broad government-run insurance program like Medicare or Medicaid as an alternative to private insurance, is more popular than a mandatory Medicare for All system that would entirely eliminate the current employer-based insurance system.

Warren supports the less-popular health care option, and while that may be an uphill challenge politically, Chris Jennings, who served as a senior health care adviser to both Presidents Barack Obama and Bill Clinton, suggests the bigger challenge for Warren is that her lack of details on health care could undermine her brand.

"This is the one area where her lack of directness stands in contrast with all her other policy visions and message approaches" said Jennings. "To me, that inconsistency is hurting more than even the policy itself."

Earlier this month, after weeks of sidestepping questions about health care, Warren said that she intends to release a plan soon that explains how she intends to pay for Medicare for All. 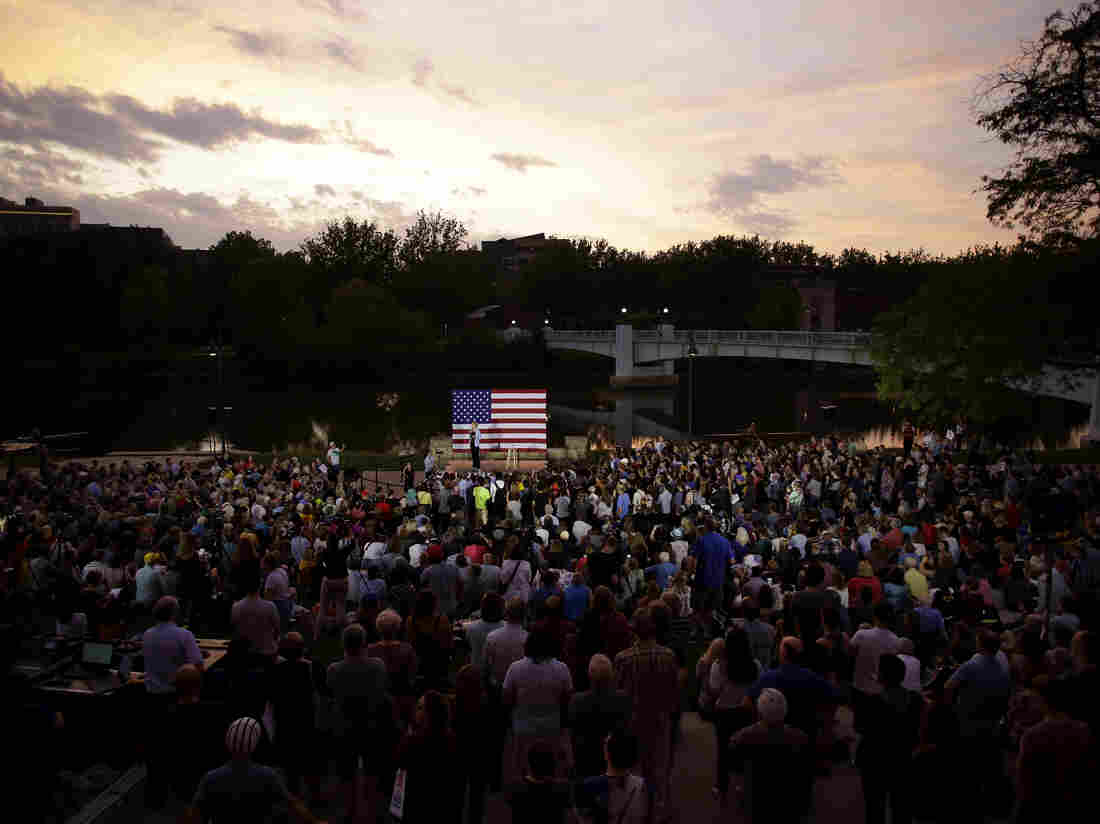 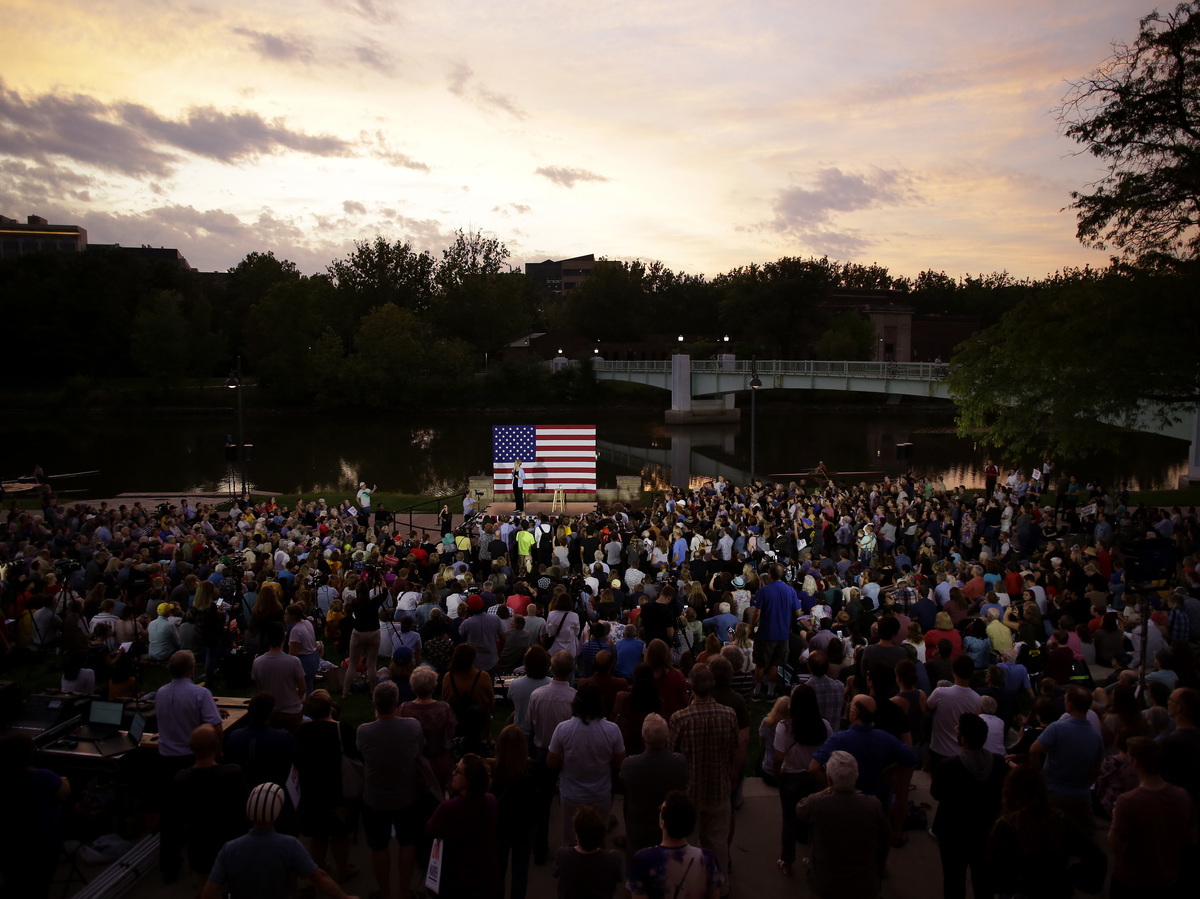 Whenever Warren has been asked about a potential tax increase to fund Medicare for All, she tries to reframe the question as a matter of costs, not taxes.

But as some in the ultra-left progressive flank of the party have begun to suggest that Vermont Sen. Bernie Sanders is the only true believer in Medicare for All, Warren has also made a point to reaffirm her support for the idea itself.

"Medicare for All is the cheapest possible way to provide health care coverage for everyone," she told voters in that same Des Moines speech. "I want you to hear it from me."

"She will think clearly about alternatives"

Still, there is a sense among some people who like Warren that her support for Medicare for All is somewhat out of character.

"I was a little surprised recently that she came out in favor of a Medicare for All plan," said Tom McGarity, who taught law school with Warren at the University of Texas in the early 1980s and is a fan of her candidacy. "My guess is as the campaign continues, she'll refine that to some extent."

"It's a very expensive proposition, and it's not well defined. One thing about Liz is, at least politically, usually before she comes out with something ... she defines it better," he added.

The Warren campaign has not responded to questions about whether she could eventually compromise on the issue.

It is not uncommon to meet die-hard Warren supporters who are lukewarm about Medicare for All.

Recent polling from NPR member station WBUR finds that Warren is the most popular candidate in her home state of Massachusetts, but her idea of Medicare for All is not. "Medicare for All Who Want It" is a more popular option.

"I'm not sure that Medicare for All is the correct answer. I think a hybrid is perhaps a better answer," said Kimberly Winick, a former law school research assistant for Elizabeth Warren and a strong supporter of Warren's candidacy.
"The real question isn't whether you support every plank of the platform, but whether you think the person standing at the top is somebody whom you can trust," she added. 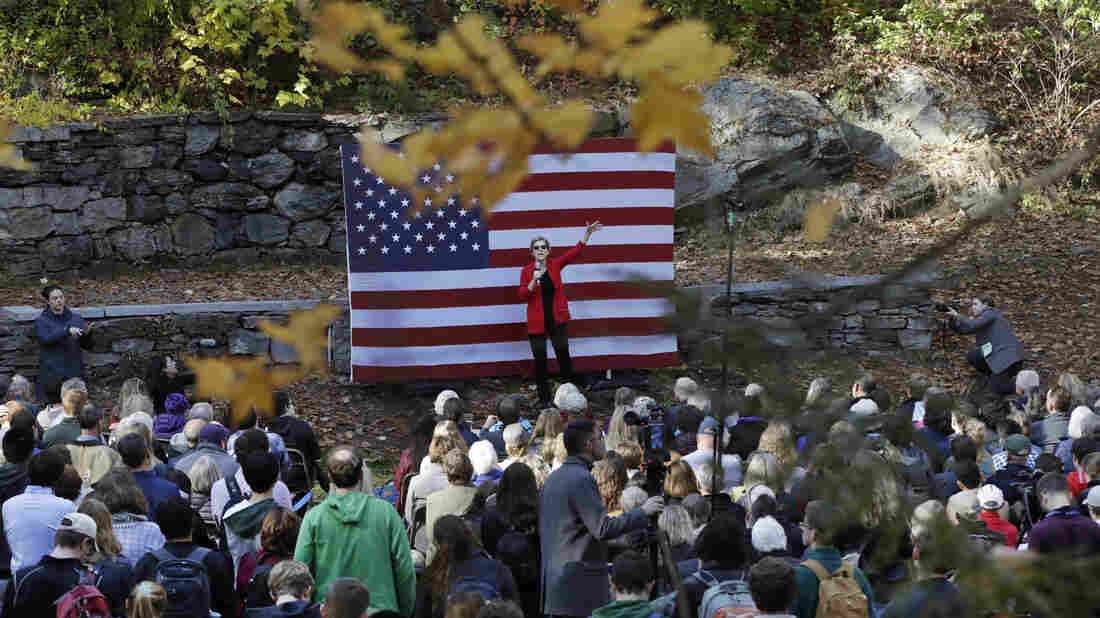 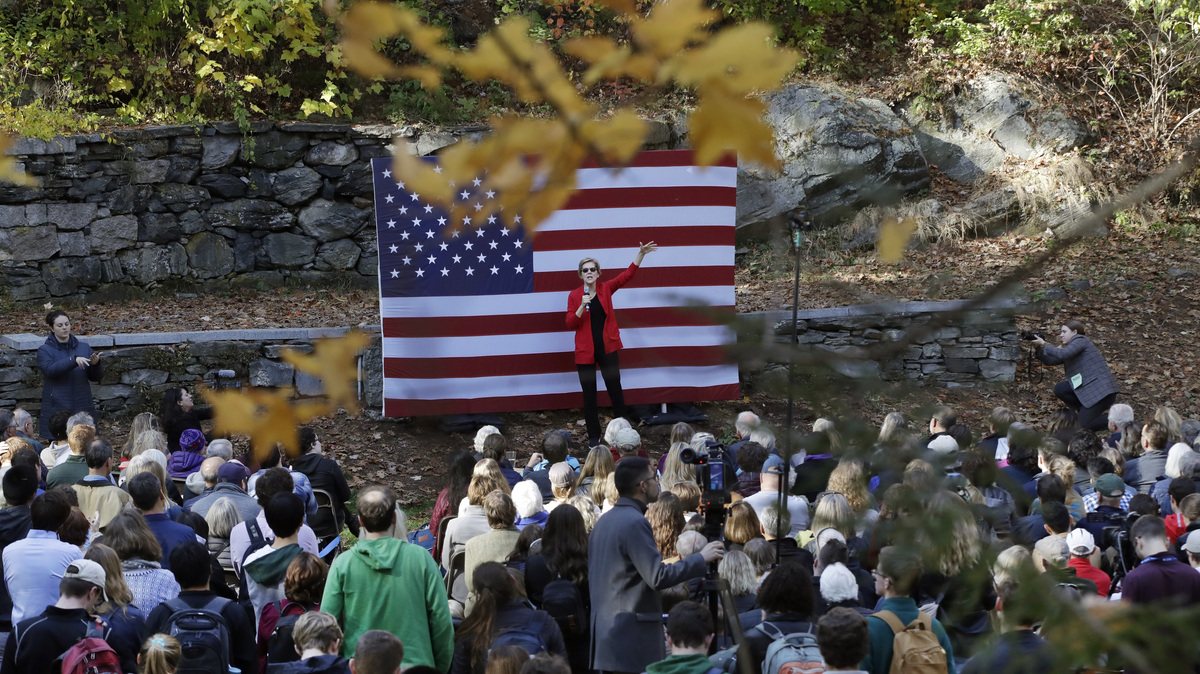 And Winick trusts Warren. She worked closed with the senator in the 1980s on bankruptcy research and feels she has an understanding of her personality and work ethic.

"I also know down the road if it becomes implausible, impractical, impossible to do those things, she'll consider alternatives," she said. "And she will think clearly about alternatives, she won't pretend facts don't exist."

Former Senate Majority Leader Harry Reid espoused a similar thinking recently in a podcast interview with David Axelrod, a former strategist for President Obama. Reid, in an attempt to defend Warren from criticism that she's "too far left," gave the impression that Warren is not as committed to Medicare for All as she has suggested.

He said he advised Warren that strengthening Obamacare is the best plan for now, and a public option is "as good as Medicare for all, anyways."

"That's not what she's saying though," Axelrod responded.

"You give her some time," Reid said. "I think she's not in love with that, you'll wait and see how that all turns out."

But pragmatism is not what Warren has been selling on the campaign trail. She often ends her stump speech with a promise to "dream big" and "fight hard."

It's not clear how much wiggle room — if any — Warren has on the substance of Medicare for All. But health care consultant Chris Jennings thinks she has a little bit more negotiating space than some of her rivals.

"Her fan base, her voters, will give her more credit for trying to go as far as she possibly can on this issue, and then when, and if, she has to trim it back a bit, she'll have more room for compromise than many other candidates will," said Jennings. "And I say that because she's viewed as a fighter, she won't compromise just to compromise, she'll compromise to get something done."