Accessibility links
Dave Chappelle Accepts Mark Twain Prize For American Humor Sarah Silverman, Tiffany Haddish and Jon Stewart were among the comedians who honored Chappelle as he received the annual American humor award in a music-filled ceremony at the Kennedy Center. 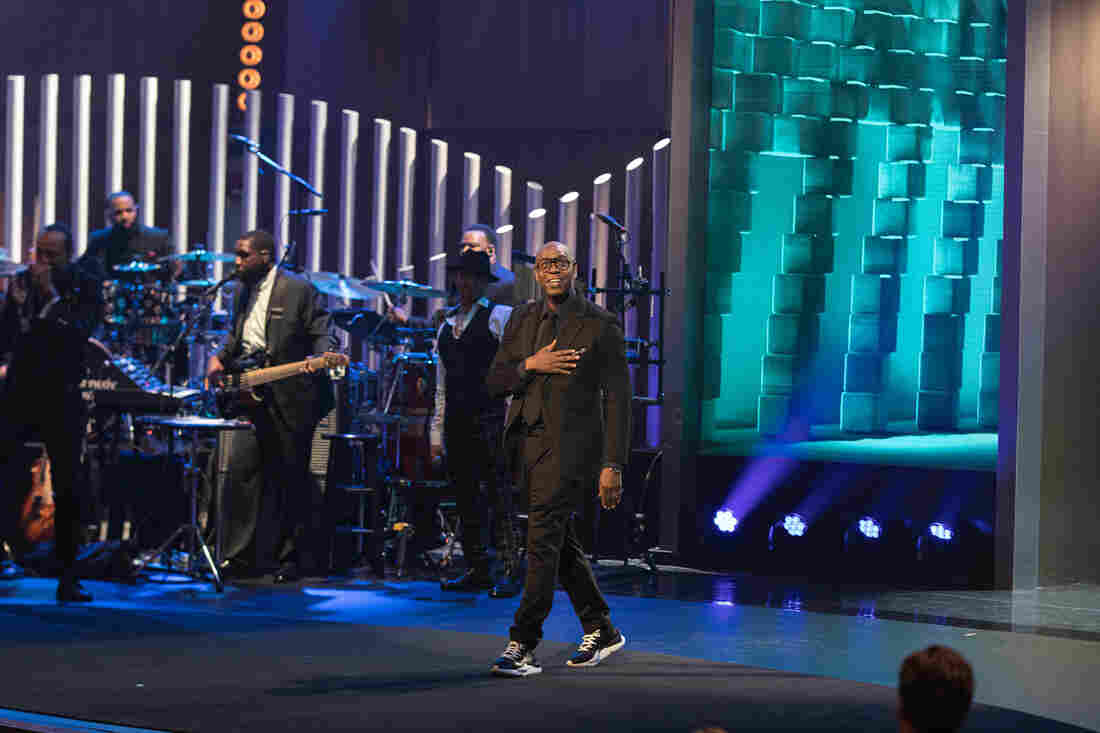 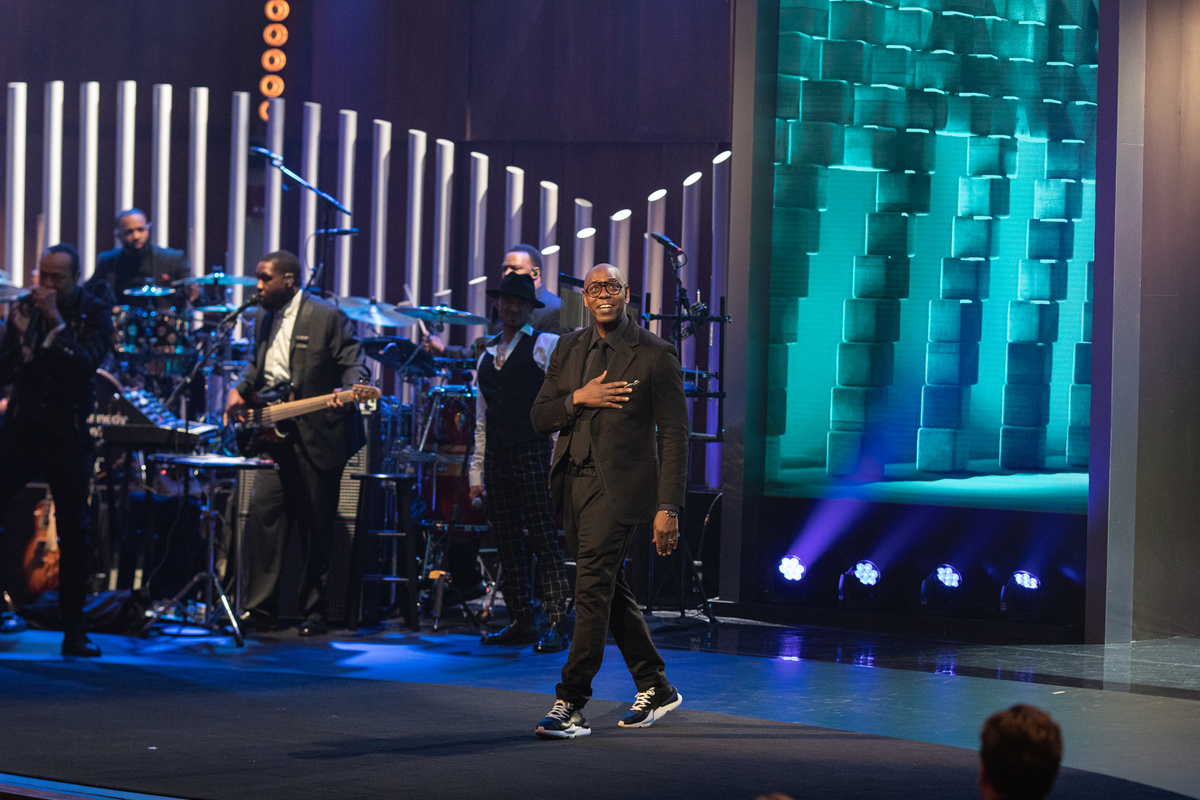 Dave Chappelle accepts the Mark Twain Prize for American Humor at the John F. Kennedy Center for the Performing Arts. PBS will air a television special of the ceremony in January.

Tracey Salazar/Courtesy of the Kennedy Center

Dave Chappelle grew up near Washington, D.C. So when he received the Mark Twain Prize for American Humor on Sunday night at the John F. Kennedy Center for the Performing Arts, it was a family affair.

Chappelle's wife and kids were there. A selection of his favorite musicians — people like Yasiin Bey, Common, Erykah Badu, Q-Tip, Frederic Yonnet and John Legend — performed throughout the evening. And his fellow comedians talked about him like he was kin.

"Dave, you have always been a mentor," Tiffany Haddish said from the stage. "You've been my mentor, my big brother. Every time I step on stage — every time — I think of you, because I've always want[ed] to make you proud. 'Cause you the greatest."

Silverman expressed a common sentiment: "His critical thinking is his art," she said from the stage. But she also cracked a few jokes about her friend.

Though he was already well-known as a stand-up comedian, Chappelle's career took off in the early 2000s with Chappelle's Show on Comedy Central. The show obliterated boundaries. In the first episode, Chappelle played Clayton Bigsby, a white supremacist who was blind — and thus didn't know he was black.

"That was the funniest thing I'd ever seen in my life," SNL's Kenan Thompson said on the red carpet. Thompson also reflected a bit on Chappelle's style as a comedian: "Whatever your fears might be, he wants to clear the air and dig down and find out what's really funny about different situations. And that's the ultimate job of a comedian, and he's great at it."

Chappelle famously walked away from Comedy Central midway through the show's third season. Jon Stewart was also working at Comedy Central at the time, hosting The Daily Show. Onstage, Stewart called Chappelle's Show a "cultural phenomenon" that Comedy Central "would do anything to keep going."

"And they offered Dave $50 million to just give us ... one more," Stewart said. "But Dave, at that moment, was conflicted because of the difficulty of how the show was to do, because he wondered about its impact on the audience that he meant it for. And he wondered if the creative process wasn't right for it. And he walked away.

"And it was that moment that I remember thinking: 'Comedy Central has $50 million?' "

Chappelle eventually went back to doing stand-up, weaving his often raunchy jokes with serious reflections on social issues. He has taken on the #MeToo movement and cancel culture.

Chappelle took some heat recently when he said he didn't believe Michael Jackson's accusers, and when he made jokes about transgender people. You'd be hard-pressed to find a group that Chappelle has not joked about.

"If you're in a group that I made fun of, then just know that I probably would only make fun of you if I see myself in you," he said in his most recent stand-up special, Sticks & Stones.

Before receiving the Mark Twain award, Chappelle told NPR that stand-up is his "favorite mode of expression" and that he calls it "an American phenomenon."

"It's the best part of the First Amendment to me that I'm able to express myself this way and make a viable living doing it," he said. "And it's not necessarily an easy living but it's ... worth everything that I've been through — especially to get a night like tonight, and have people just recognize it's not an easy thing to do. And it's humbling to get an award."

From the stage, he expressed joy at seeing so many friends from different parts of his life, and at being a part of the comedy community. "I want you to know it [the award] belongs to all of us," he said.

Chappelle had special praise for three people: the comedian Tony Woods, a major early influence; the director Stan Lathan, who masterminded his five recent Netflix specials; and his mother, who encouraged him to be a griot of his time.

"But early in my career, if you remember, Mom, you used to sit in the club with me," he said. "She'd do a full day of work. You'd be back there falling asleep, just waiting for me to go on. She would watch my show every night. Do you know how long that car ride is home?"

He paused briefly for applause and then offered this detail: "How many of you have ever heard your mother say: 'P***y jokes were a little too much tonight, son'?"

A television special of the ceremony for the Mark Twain Prize will air on PBS stations starting Jan. 7.

Patrick Jarenwattananon adapted this story for the Web.