Accessibility links
'Lock Him Up': Trump Greeted With Boos And Jeers At World Series Game 5 Baseball fans booed President Trump in Washington on Sunday, hours after he announced the death of a terrorist. Some also put a spin on a refrain Trump supporters have chanted against Hillary Clinton.

'Lock Him Up': Trump Greeted With Boos And Jeers At World Series Game 5

'Lock Him Up': Trump Greeted With Boos And Jeers At World Series Game 5 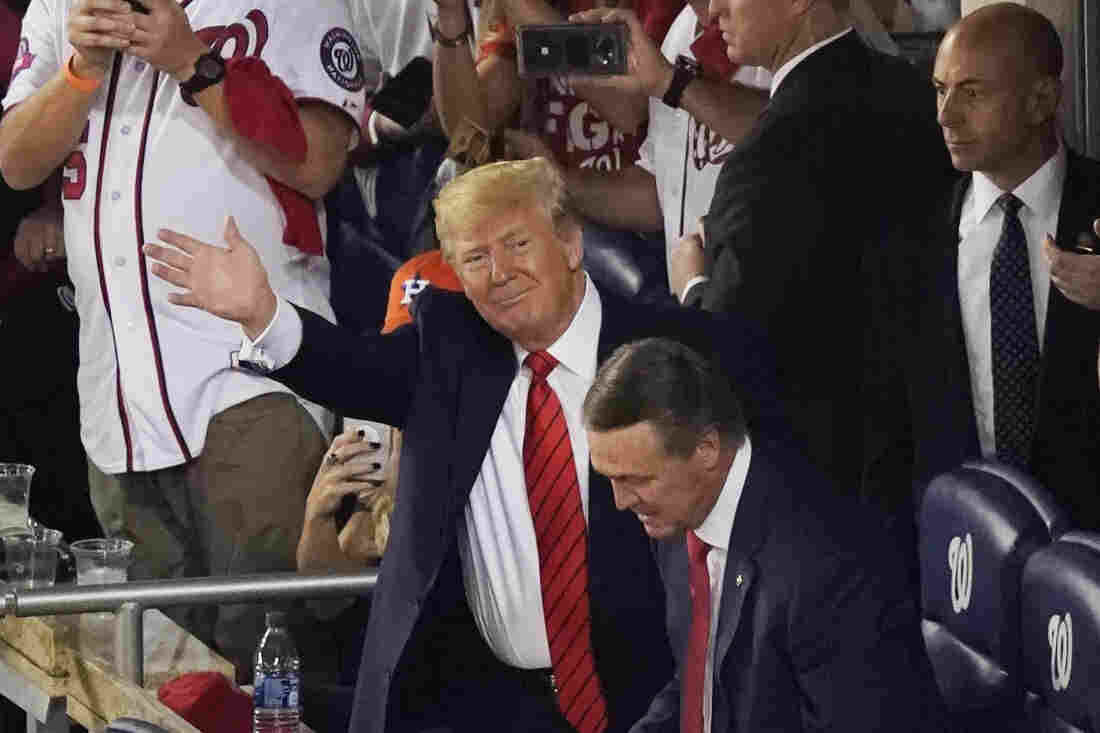 President Trump is introduced during Game 5 of the World Series between the Houston Astros and the Washington Nationals on Sunday. Fans greeted Trump with boos and jeers, with some chanting "Lock him up." Pablo Martinez Monsivais/AP hide caption 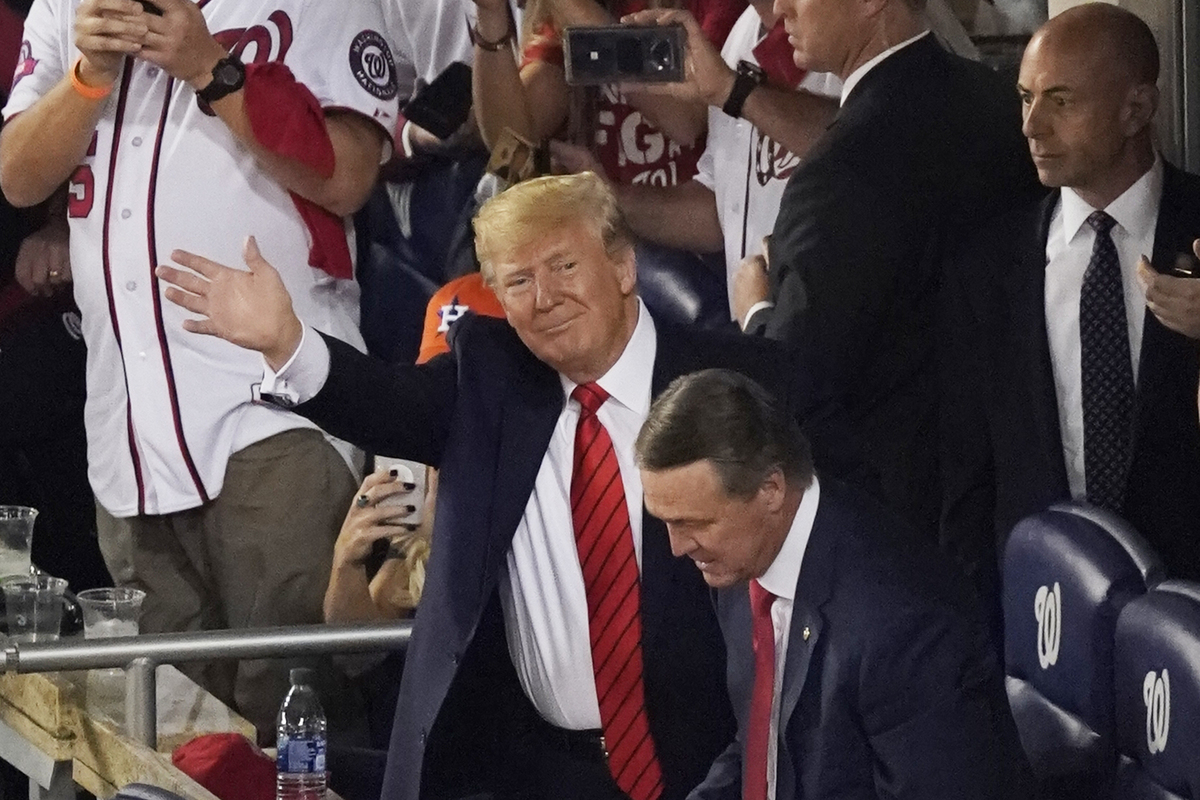 President Trump is introduced during Game 5 of the World Series between the Houston Astros and the Washington Nationals on Sunday. Fans greeted Trump with boos and jeers, with some chanting "Lock him up."

Fresh off announcing the death of one of the world's most wanted terrorists, President Trump appeared at Game 5 of the World Series in Washington to find a crowd not eager to praise his achievement.

When Trump's attendance was announced and he was shown on the big screen at Nationals Park on Sunday night, baseball fans greeted the president with loud boos and jeers. Sections of the ballpark chanted "Lock him up" — a spin on Trump's refrain against Hillary Clinton that has remained common at his rallies, even after the 2016 presidential election.

President Trump was booed loudly by the fans at Nats Park when he was shown on the big screen.
Then came a loud chant: “Lock him up.” @wusa9 pic.twitter.com/LBbgSAHd6k

Trump, standing next to first lady Melania Trump, appeared unperturbed by the din, smiling and clapping before moving to say something to House Minority Leader Kevin McCarthy.

Later in the game, fans unfurled a "VETERANS FOR IMPEACHMENT" banner right behind home plate.

Asked if the Nationals wanted Trump there, Martinez said: "We haven't really talked about it. We're focusing on playing baseball."

The Nationals ended up getting walloped by the Houston Astros, 7-1. They now trail 3-2 in the best-of-seven series.

Boos heard throughout Nationals Park as President Trump and the First Lady are announced and shown on screen after the “wave your caps” moment between innings pic.twitter.com/RSZlbMA2W7

It's rare to see Trump out in public in Washington, a Democratic stronghold in which just 4% of residents voted for Trump in the 2016 general election.

In a break with tradition, Trump did not throw out the ceremonial first pitch Sunday night, as is customary when a sitting president attends a baseball game.

While league officials said Trump said he was not interested in throwing the first pitch, citing concerns about slowing down thousands of fans entering the ballpark, Nationals principal owner Mark Lerner indicated that there were many other first pitch candidates who were considered before the president.

Last week, Trump told reporters that the bulletproof vest he would have to wear made the idea of tossing the ball from the mound unappealing.

"They gotta dress me up in a lot of heavy armor. I'll look too heavy. I don't like that," Trump said. 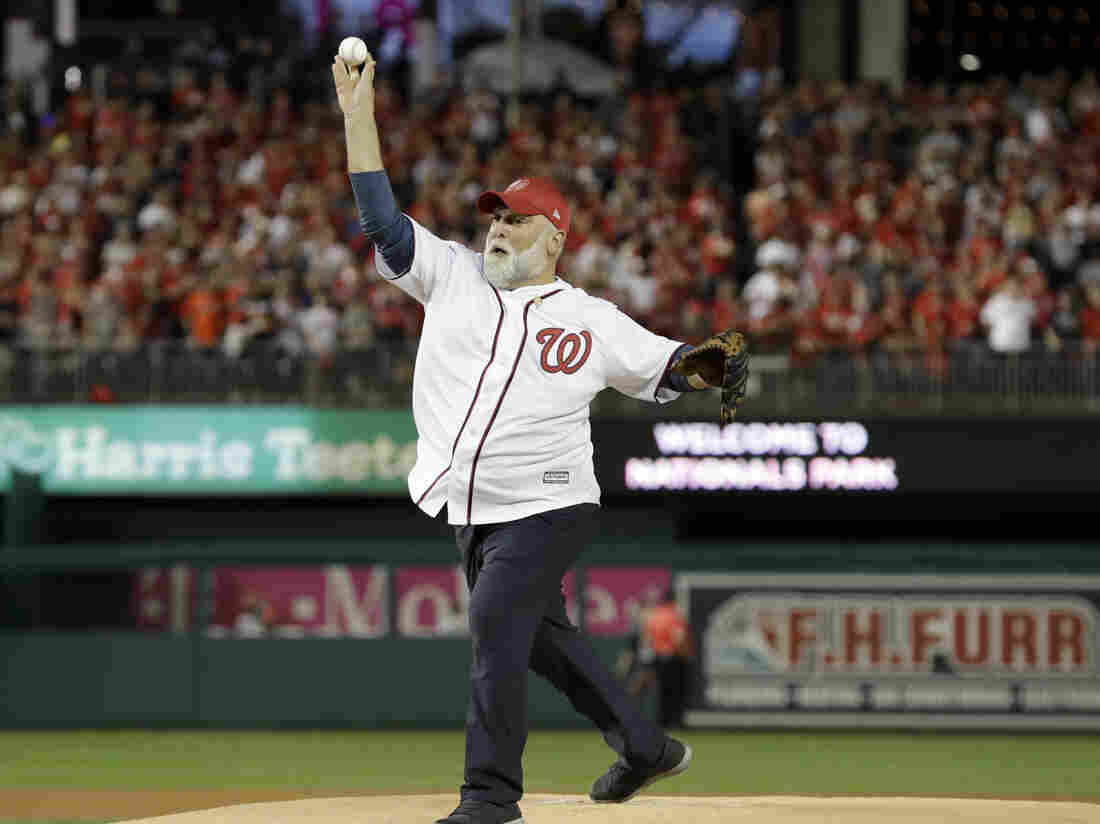 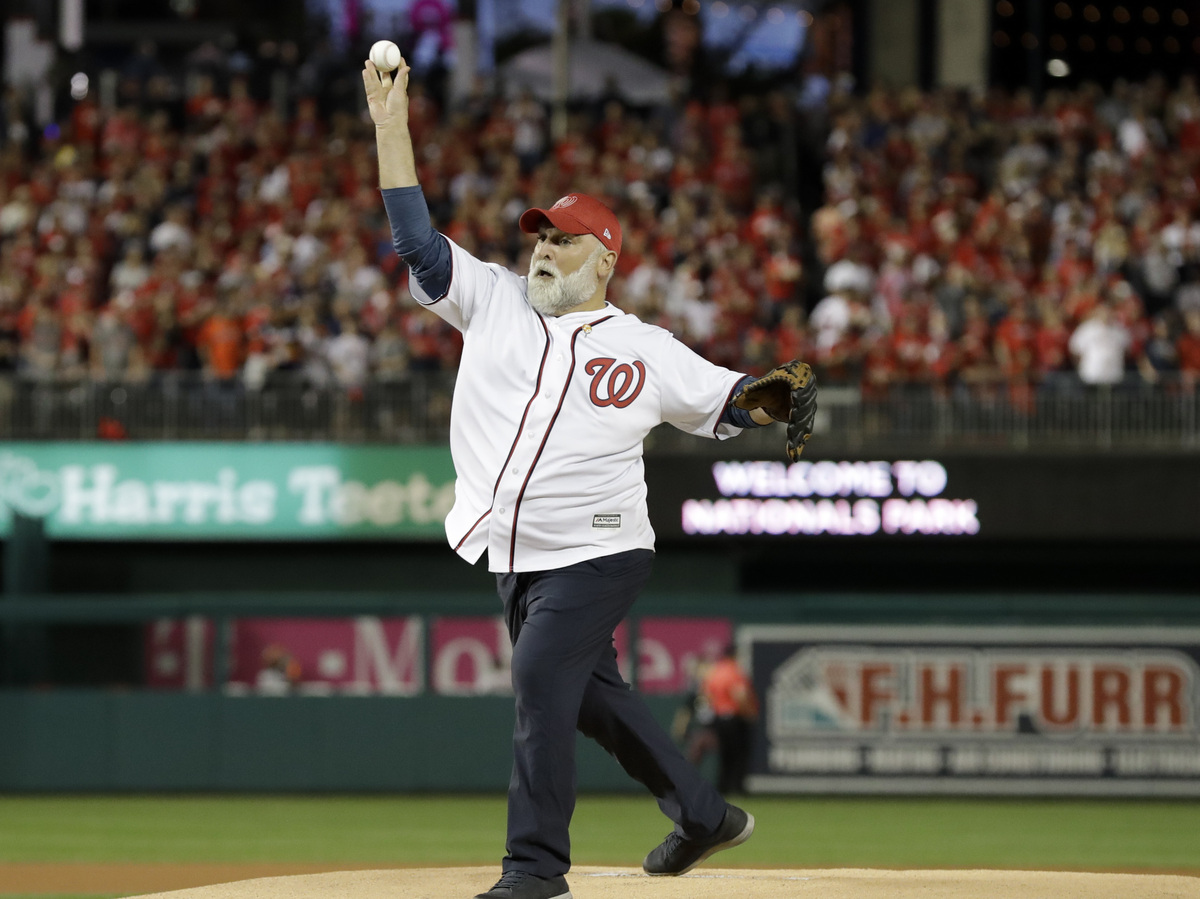 Chef José Andrés, an outspoken critic of Trump, throws the ceremonial first pitch before Game 5 of the World Series in Washington.

Instead of the president, José Andrés, a Spanish-born chef and Washington restaurateur known for providing free emergency meals to victims of natural disasters as well as to furloughed federal workers through his organization World Central Kitchen, threw out the first pitch to stadium-wide applause.

Andrés has long been an outspoken critic of Trump, especially the president's hardline immigration policies.

In 2015, Andrés pulled out of a plan to open a restaurant in the Trump International Hotel in Washington after then-candidate Trump made disparaging remarks about Mexican immigrants, calling them drug dealers and rapists as he campaigned.

On Sunday evening, Andrés thanked the Nationals and the MLB for inviting an immigrant to throw the first pitch.