Accessibility links
Book Review: Blending Memoir And Reporting, 'The In-Betweens' Exposes An Otherworldly Community Mira Ptacin spends time at Camp Etna and finds herself believing, at least, in the ideals of Spiritualism — emphasizing kindness, the importance of intuition, and the power of the unseen.

Blending Memoir And Reporting, 'The In-Betweens' Exposes An Otherworldly Community

Blending Memoir And Reporting, 'The In-Betweens' Exposes An Otherworldly Community 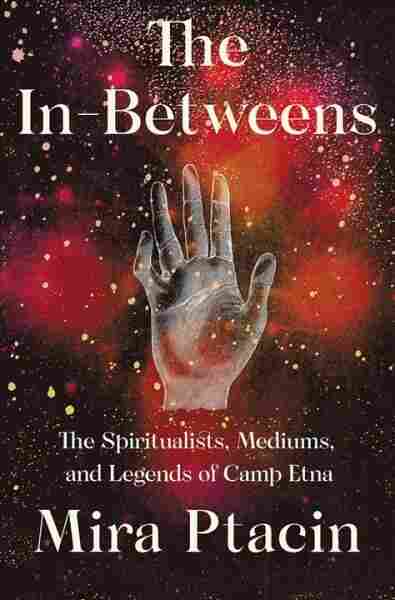 The Spiritualists, Mediums, and Legends of Camp Etna

Your brain performs a little trick every time you turn around to look at something. Instead of presenting you with a disorienting blur of ocular input before your eyes can adjust to the new field of vision, it backfills your memory a few seconds using whatever you're looking at now.

It's a subtle piece of business. You usually don't even notice, unless you look too quickly at a blinking light and feel for a moment that one of those blinks is taking awfully long. If you ever looked quickly at a flashing alarm clock as a child and felt like you could momentarily control time, that's why.

Saccadic masking is also more or less the experience of reading Mira Ptacin's The In-Betweens, a deft account that begins as a social history of Spiritualism and moves into memoir so quickly it can take a second to realize you've backfilled something that wasn't quite there.

The book takes place largely around Camp Etna, a Spiritualist enclave in Maine over a century old. At one point it was a veritable Disneyland of table-tipping, spirit photography, and barbershops, and Ptacin nimbly traces the movement from the early days — when Spiritualism offered women (often via mediumship) a public voice and sense of authority — to its heyday as a ghostly carnival, into the public backlash at the hands of skeptics like Harry Houdini, to the New Age of crystal healing and the even newer age of high-tech ghost hunting.

Now, Camp Etna is the home of a few holdouts from the last generation of Spiritualists before the New Age, and some of those New Agers hoping to reinvigorate the community and the business of Spiritualism. This is where things get personal, as Ptacin visits the various Spiritualists living at Camp Etna and experiences some of that table-tipping, dowsing, and aura-reading firsthand.

Increasingly, as she spends time at Camp Etna, Ptacin finds herself believing: if not in a particular tipped table, than in the ideals of Spiritualism, where believers emphasize the Golden Rule of kindness, the importance of intuition, and the power of things not seen. For Ptacin, this last — which ties into how Spiritualism treats death, grief, and mourning — proves powerful. But Ptacin has an eye for how to balance the loving (occasionally breathless) portraits of practitioners with the inevitable surreality of the situation; at one point she passes "an assemblage of Buddha statues and one large angel holding a chalkboard with the word vibration written on it."

And there's that saccadic masking, where it can seem as if something has been touched on, when you were really just passing by it. In particular, though Ptacin clearly takes note of the sage, the Buddhas, the name-the-chakras singalong set to "Do Re Mi" (a chilling thought), she never presses her subjects about the ways modern Spiritualism borrows deeply from Indigenous and Eastern traditions with little but some lip service in return. Even when attending a powwow (which spurs sweepers like "Despite all that had been destroyed and taken from them, the Native Americans still lived in reverence with Mother Nature"), there's precious little perspective to be found from the people from whom Spiritualism and its related trends have so liberally — and profitably — borrowed.

That Ptacin left such topics untouched can give the social history the air of a scrapbook from a beloved summer camp rather than a particularly journalistic endeavor. But that's not a surprise; even in her moments of ambivalence, she's deeply sincere about the residents of Camp Etna, and her desire to understand Spiritualism and, inevitably, herself. Luckily, she brings a dry eye with her for the detail work, and even if things wrap a little neatly, at its best The In-Betweens captures its own chaotic energy — a flawed community of colorful characters whose generational or ideological differences can usually be smoothed over in the name of healing, belonging, and walking your cat.