Accessibility links
2 More Horses Die At Santa Anita Park As It Prepares To Host Breeders' Cup Two horses sustained severe injuries at the racetrack and were euthanized. Since late December, there have been 36 fatal incidents at the park. 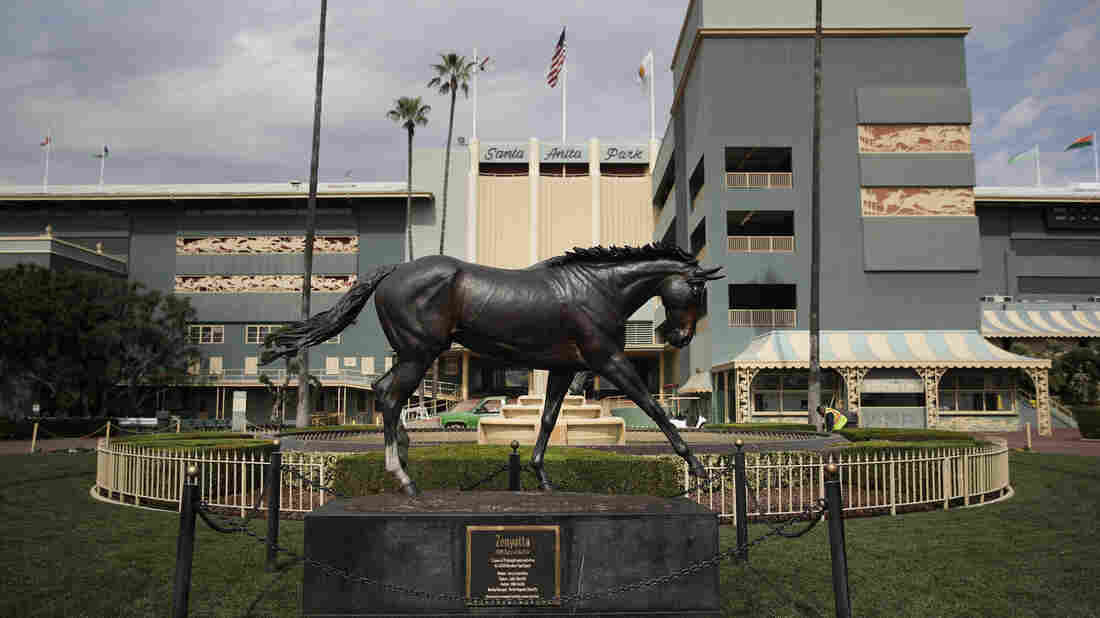 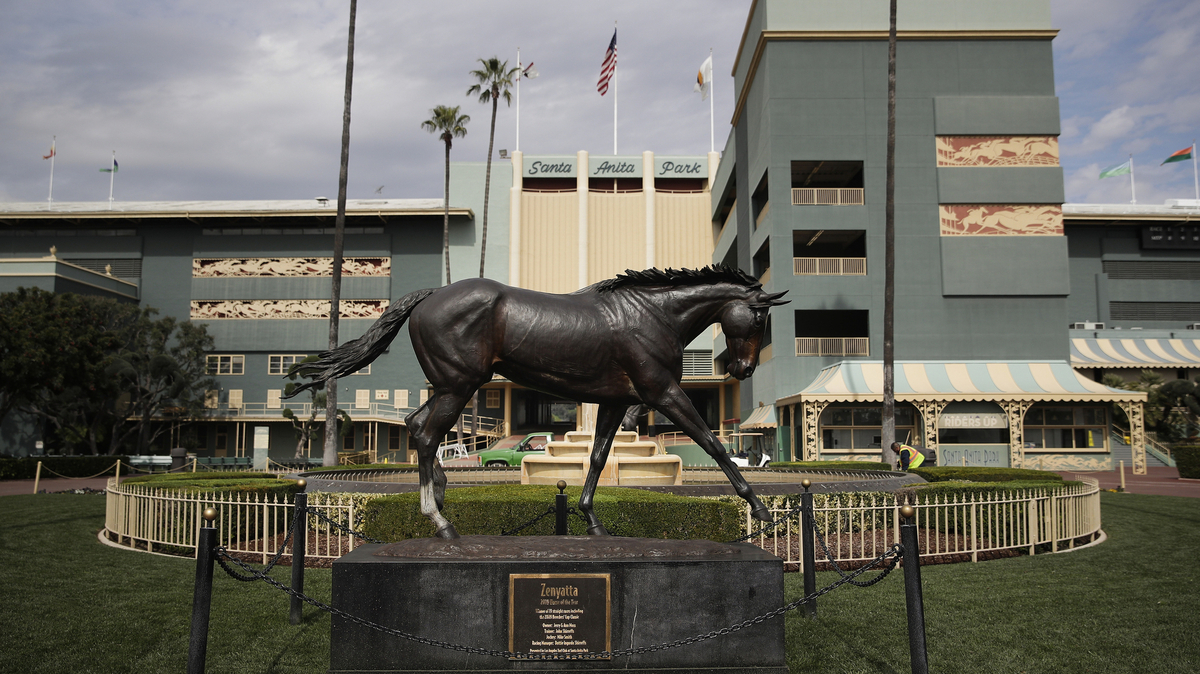 A statue of famous racehorse Zenyatta at Santa Anita Park in Arcadia, Calif.

Two horses were euthanized this past weekend following injuries at Santa Anita Park, bringing the number of horses to die at the famed Southern California track to 36 in the calendar year.

On Sunday, a two-year-old filly named Bye Bye Beautiful was euthanized after sustaining a severe injury during a race. The death followed a training incident on Friday, when G Q Covergirl, a six-year-old mare, was euthanized following an injury to both of her front legs.

The deaths come just days before Santa Anita Park will host the 2019 Breeders' Cup World Championships. Critics had called for those races to be moved from the racetrack — an initiative that didn't come to fruition.

Outgoing Breeders' Cup Ltd. CEO Craig Fravel said in a recent interview that the prestigious race chose not to change venues because "when people are trying to do the right thing, you need to stick with them."

After this year's Breeders' Cup, Fravel will move on to oversee racing operations for Santa Anita Park's owner, the Stronach Group.

People for the Ethical Treatment of Animals has called on law enforcement to investigate the dead horses' trainers.

"Santa Anita has taken extraordinary measures to protect horses, but it can't criminally investigate trainers and veterinarians for the deaths of Bye Bye Beautiful and the other horses," said PETA Senior Vice President Kathy Guillermo. "Law enforcement must do this. PETA again calls on the district attorney's office to release its findings of its investigation into the deaths of the horses immediately and hold those responsible accountable."

The track in Los Angeles County suspended racing for much of March — when horse deaths had reached nearly two dozen — as it worked to learn what was behind the high death toll.

The racetrack reopened in late March, after the park announced several changes, including limiting the use of pain or anti-inflammatory medications for horses and increasing the time required for horses to be on-site prior to a race. The track also has a new drainage system meant to make it safer.

But more horses have died since the park reopened for its autumn meet. Advocates for the abolition of horse racing have used these incidents as an example of poor living conditions that racing horses endure. Patrick Battuello, the founder of Horseracing Wrongs, told NPR that no amount of measures taken by Santa Anita Park will prevent deaths.

"With all of this talk about safety measures and welfare improvements and this hypervigilance that the industry has been displaying since they were exposed back in the spring, they still can't stop the killings," Battuello said.

An online petition calling for Santa Anita Park to shut down has garnered nearly 130,000 signatures.

Rick Baedeker, executive director of the California Horse Racing Board, spoke to NPR in March, expressing concern at the spike in deaths.

"We have had short periods of time where there have been numerous losses and the alarm bells have gone off, but nothing like this," Baedeker said.

Both the CHRB and the Los Angeles County District Attorney's Office have undertaken investigations into fatalities at Santa Anita Park. The CHRB's findings are set to be published in December.

In a previous version of this story, we incorrectly said G Q Covergirl had been injured and euthanized on Saturday. The incidents happened Friday.