Accessibility links
Review: Kanye West's 'Jesus Is King' Has Its Moments, But Asks Too Much There are moments of inspired magic on West's gospel-flavored ninth album, and moments that sound ill-considered and slapped together. Those extremes feel like the story of his recent career.

Kanye West's 'Jesus Is King,' Like Its Creator, Asks A Little Too Much Of Us

Kanye West's 'Jesus Is King,' Like Its Creator, Asks A Little Too Much Of Us 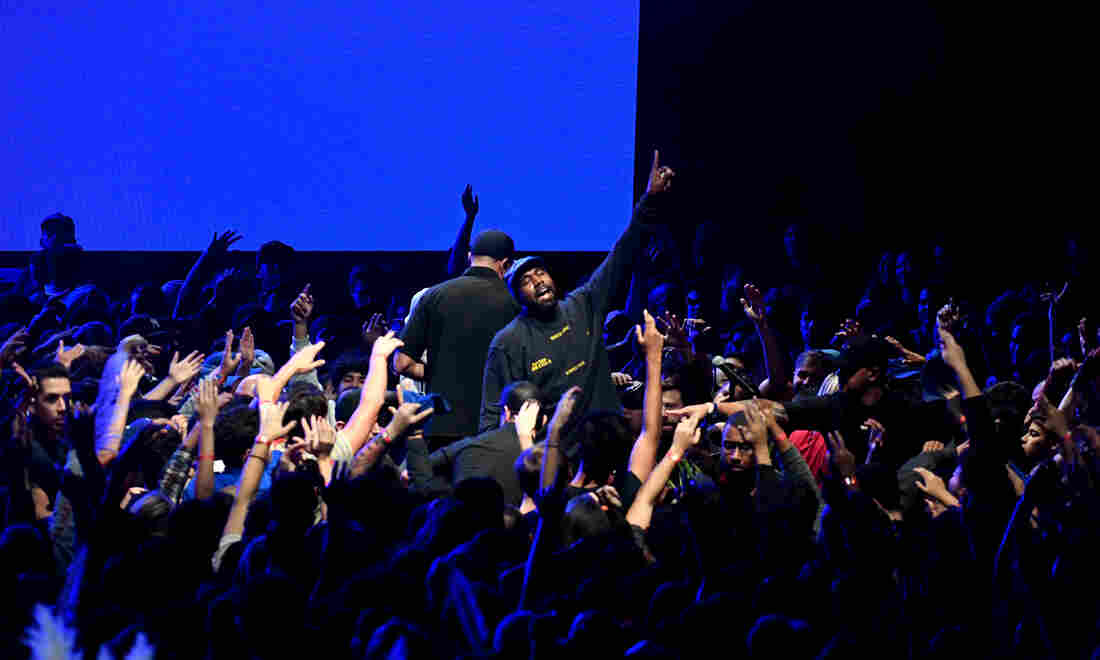 Kanye West onstage during his Jesus Is King album and film event at The Forum on Oct. 23, 2019 in Inglewood, California. Kevin Winter/Getty Images for ABA hide caption 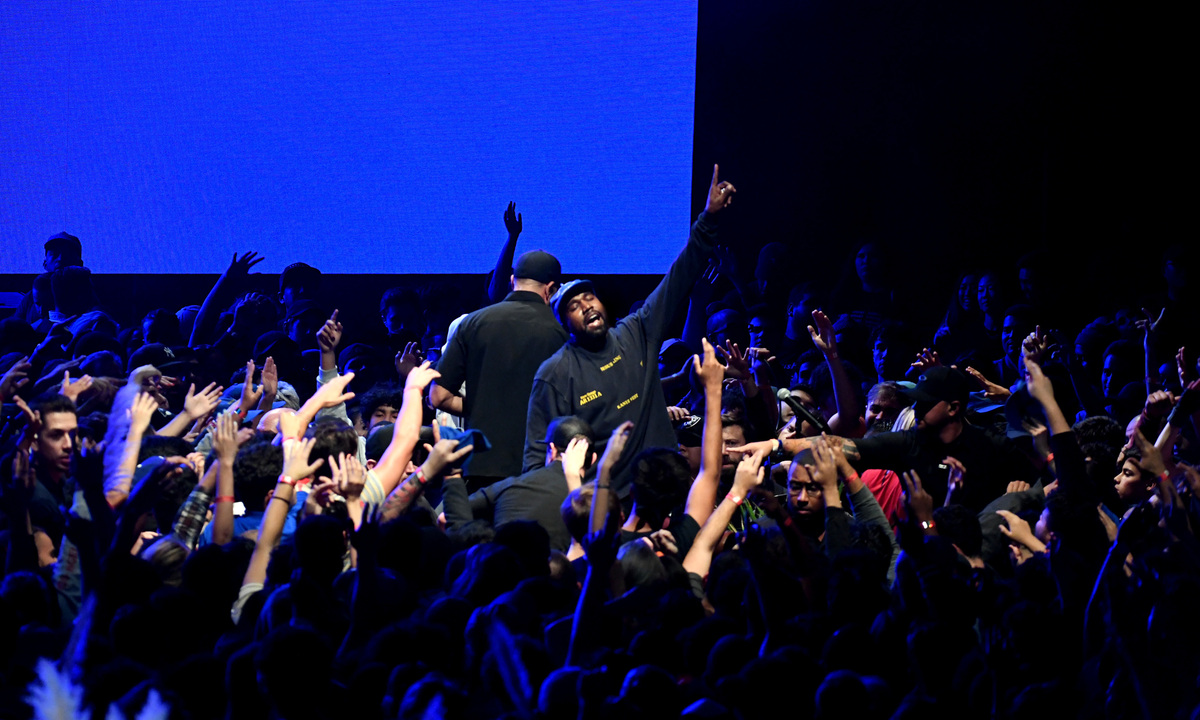 Kanye West onstage during his Jesus Is King album and film event at The Forum on Oct. 23, 2019 in Inglewood, California.

As a public figure, Kanye West sometimes seems to change course every other day. But where his musical output is concerned, his most consequential turning point came 10 years ago, by way of two very different albums.

First was the 2008 release of 808s and Heartbreak -- recorded after the unexpected death of West's mother — whose icy, digital sheen made a surprising break from his earlier soul-sample style of production. Seen as an aberration at the time, 808s is now recognized as a key influence on modern hip-hop's minimalist sound, and suggested the trajectory of West's career would be different from those of the golden-era rap acts who had originally inspired him.

Then came 808s' follow-up in 2010, My Beautiful Dark Twisted Fantasy. In contrast to its predecessor, this album was a maximalist affair, full of lush production and grandiose stylistic gestures. It also marked West's turn towards releasing albums as full-scale spectacles that leveraged his celebrity status — by then always awash in controversy — and worked as one arm of a multi-industry Kanye West business complex that has since become valued at over a billion dollars.

In the decade since, no other pop music figure has drawn such rubbernecking fascination, especially once West discovered the power of Twitter as an unmediated outlet for self-expression. He inspires so much public contemplation and condemnation that the release of each new album feels like a performance unto itself, even before the public has heard a note of the music.

Forgotten: The Things We Lost In Kanye's Gospel Year

In many ways, West's latest album, Jesus Is King, draws on the DNA of both these predecessors. As with 808s, it finds West exploring new sonic territory, here in the form of the black gospel tradition — more on that later. Likewise, as has been the case with every album since Fantasy, Jesus Is King came to us only after having spent time in the wilderness that is West's rollout strategy, or lack thereof.

Parts of this record were originally meant to come out a year ago under the name Yandhi, an album given two release dates that were announced and missed. When it resurfaced this year as Jesus Is King, renamed to reflect West's new embrace of evangelical Christianity, fans were understandably wary that it would actually appear, even after West shared versions of it at high-profile listening parties. At midnight on Oct. 25 (after a September release date had come and gone), I was one of the many people hitting refresh on streaming sites, wondering if we were all suckers.

As it turned out, West said he needed extra time to fix some of the mixing of the songs, reminding fans just how impulsive his music-making process has become. Later that day, Jesus Is King finally arrived. Hallelujah.

For all the Sturm und Drang that preceded this release, it says something that in its first few seconds West can momentarily make the listener forget it all. Jesus Is King opens as well as any West album of the decade with "Every Hour," a rousing, exuberant convocation lead by his Sunday Service choir. Though it's less than two minutes long, "Every Hour" feels more vibrant and enthralling than the whole of ye, his instantly forgettable seven-song album from last year. The next song, "Selah," uses ominous church organs to set up a powerhouse performance that recalls some of the sound and fury he brought on 2013's Yeezus. That's followed by "Follow God," on which he returns to his to his chop-up-the-soul production roots, working a precise, staccato flow around an obscure gospel sample.

Alas, the next song, "Closed on Sunday," stalls the momentum, partly because the production is too sparse and anemic, partly because the refrain — "Closed on Sunday / You my Chick-fil-A" — is one of the worst dad jokes in West's long history of painful punchlines. The rest of Jesus Is King's 11 songs form an effort that is better than many skeptics anticipated, yet still falls short of its pre-game hype. Despite how long it took to arrive, but in line with the chaos of the rollout, Jesus Is King feels slapped together, as if West were still in the middle of tinkering with it and then rushed its release.

There's still some notable fare on here, perhaps none better than "Water," which thanks to the crooning of Ant Clemons and a welcome return of the choir, sounds like a glorious, end-of-night dance track, just without drums. "Use This Gospel," while not the album's best song, certainly has the most eye-popping lineup in smooth-jazz saxophonist Kenny G and a reunited Clipse, aka brothers Pusha T and No Malice — the latter of whom changed his name from simply Malice when he found God and renounced his coke rap career.

West may be walking a similar path: He's publicly said it's only going to be gospel music from here on out. Whether that's a sincere intention or just another phase in West's mercurial career is hard to say. Either way, while Jesus Is King is an intriguing foray into taking gospel rap mainstream, it'll still require time or someone like West to make that turn convincingly.

Even as a faithless heathen who grew up completely secular, I find much of the black gospel tradition deeply compelling for its sincerity and feel, both of which depend on a sense of earnestness and selflessness that the best gospel singers, groups and choirs convey. If you've ever listened to Aretha Franklin's bestselling Amazing Grace album from 1972 (or seen the concert film about it that was finally released recently), you can viscerally hear how one of the greatest singers in human history can still give herself over to both the choir and church collective that surrounds her.

West, who just six years ago literally declared "I Am a God" on record, can't spin that feel out of thin air. On the new "On God," he tries to turn his narrative around, insisting that all his material success is "on God," i.e. because he's accepted Jesus. This flirts with a kind of prosperity gospel, premised on the shaky belief that net worth is a metric for spiritual salvation. It is, however, on-brand for an artist as historically self-important as West; one can imagine he'd make for a compelling megachurch minister.

And yet, in the spirit of generosity, there is a part of me that wants to embrace the idea of a newly reformed Kanye. On one of the most traditional gospel songs on the album, "God Is," he sings alongside the Sunday Service choir, his voice wavering and warbling. It's an imperfect performance, but it feels like this is West trying to bare himself, to put aside ego and perfectionism in the face of something greater. For a moment, you can almost believe him.