Accessibility links
Cultural Appropriation, A Perennial Issue On Halloween Halloween is filled with tricks and treats, but it's also filled with land mines of cultural appropriation and racist tropes. When does holiday fun turn into an offense for someone else? 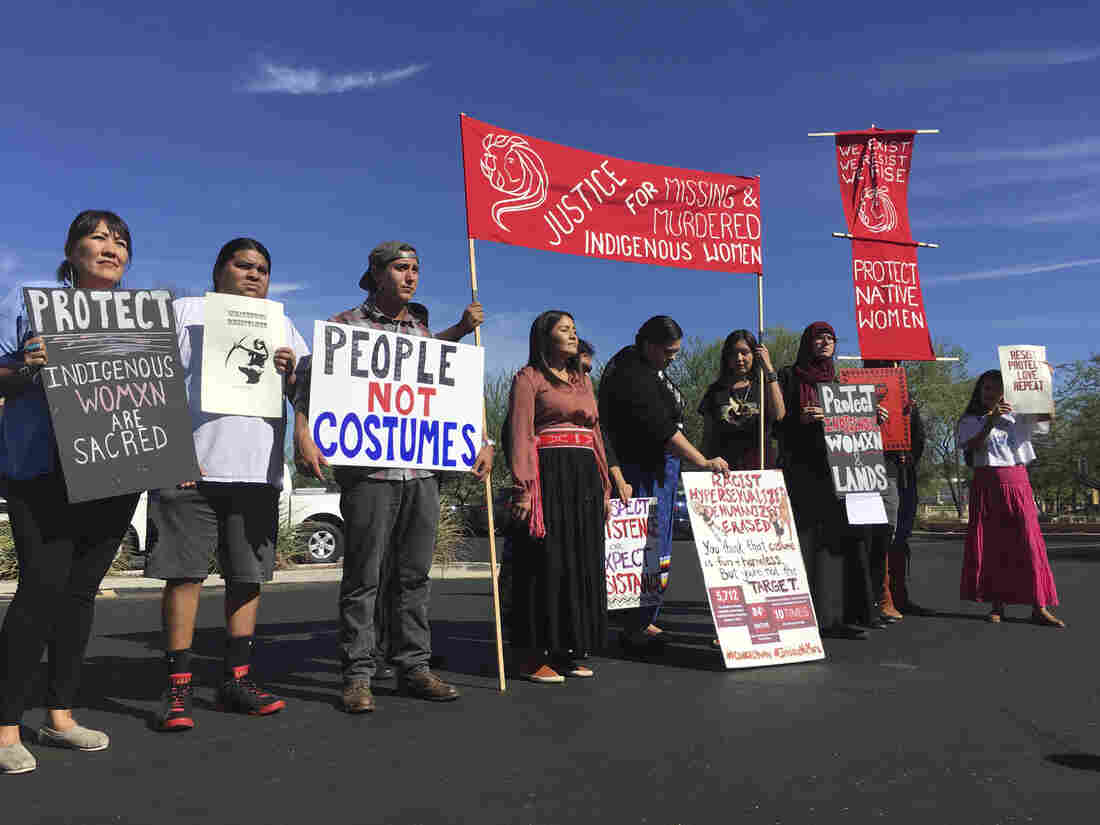 Native American protesters stand outside the Phoenix office of a retailer of "sexy Native American" costumes last year. For some ethnic and racial groups, Halloween has long been haunted by costumes that perpetuate stereotypes and instances of cultural appropriation. Terry Tang/AP hide caption 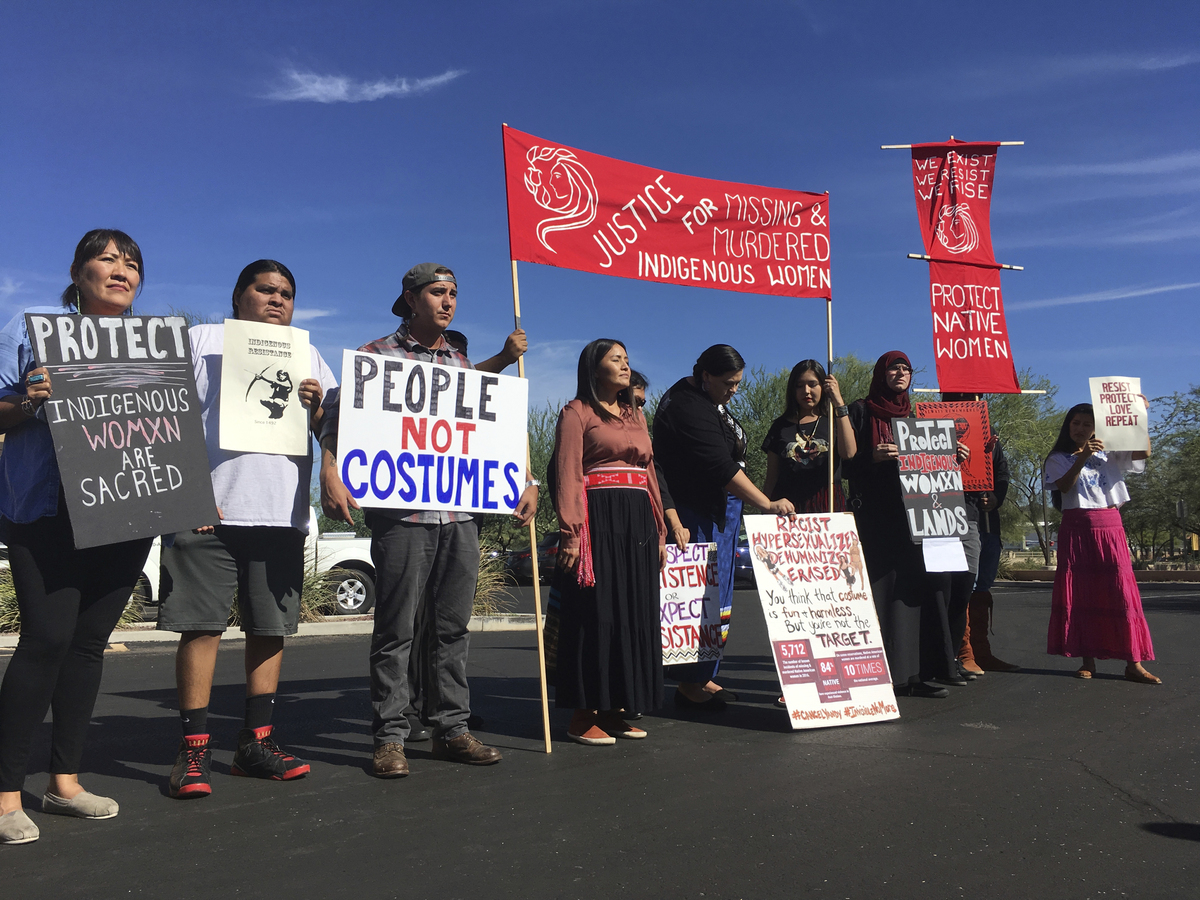 Native American protesters stand outside the Phoenix office of a retailer of "sexy Native American" costumes last year. For some ethnic and racial groups, Halloween has long been haunted by costumes that perpetuate stereotypes and instances of cultural appropriation.

Halloween is around the corner and guess what that means? Someone will metaphorically step in it with an insensitive or straight up racist costume.

The shelves of most costume stores still stock the "Arab Sheikh" outfit complete with the sinister mustache. Or you can order the "Ride a Camel Adult Male Costume." There are the "Mexican" costumes: wide sombreros, ponchos, handlebar mustaches. There are the people who darken their skin to pose as a black or brown person, although many people now understand the degrading and dehumanizing history of blackface now. And every year, there is always the generic "Native American" costume of the woman or man wearing fringe, fake suede, feathers and braids.

The Code Switch Guide To Halloween

"When it comes to Halloween in the Native community, it's like a big eye roll," said Henu Josephine Tarrant, a New York-based artist and performer of the Ho-Chunk, Hopi and Rappahannock tribes. "It becomes exhausting."

Over the years as other costumes are rightly deemed too offensive to wear because they dehumanize oppressed groups, the Native American costumes, Tarrant said, are always stocked.

"It goes deeper than what you're dressed like," she said. "When you really look at it and you really study these tropes and stereotypes and what they mean and how they affect us as Native people, you know they're all rooted in a historically violent past."

For Many Native Americans, Fall Is The Least Wonderful Time Of The Year

The costumes depict Indigenous people as a monolith frozen in time, she said.

"It really is a reflection of how we look to [non-Native Americans] and what we are to them," she said.

And the style is based on clothes worn during a violent time in the 19th century as white settlers moved west, displacing Indigenous people on the land.

"In real life during this time period, during all of these Dakota wars and these other wars and these removal acts and starvation and famine and tuberculosis, smallpox — I mean so many sicknesses and violence was attached to that time period — and as a reaction there were some Dakota and Lakota who didn't know what to do. This is a really destitute time in history. And so what they did was they held ghost feasts and ghost dances," Tarrant said.

The ghost dance shirt was worn for spiritual protection from violence. Tarrant said most Native American costumes in the shops seemed to be modeled off this style of shirt.

"We aren't seen as modern-day people at all. That's also what makes it really difficult for people to understand that what they're doing is offensive," Tarrant said. "Because for so long, it's really been, I guess, ingrained into Americana, and cowboys and Indians is a part of that."

Over the past few years, online campaigns #notyourcostume and #mycultureisnotyourcostume have helped spread awareness. Many college campuses run campaigns on cultural sensitivities during Halloween with best practices to avoid racist tropes and cultural appropriation.

Your “baby momma nana” doesn’t get to give you permission to disrespect the culture of hundreds of tribal nations. Native people and our culture are #NotYourCostume. https://t.co/GafglyszsU

Every year, teacher Jess Lifshitz sends a letter home to the parents of her fifth-graders in Northbrook, Ill., near Chicago.

"A couple of years ago I noticed that every Halloween, there were one or two kids who came in costume and for whatever reason the costume just made me uncomfortable and I worried it made others uncomfortable," she said, "because it portrayed a stereotyped image of a group of people or it was someone dressing in a way that almost seemed as if they were putting on the identity of another person as a costume."

So she got proactive. The letter asks parents and caretakers to help kids understand why dressing in a caricature of someone else's identity is hurtful.

In order to try to avoid any problematic/racist Halloween costumes during our school celebration, I will be sending this letter home to families and caretakers. I will also be going over it with my students so that we can learn together how to do better:https://t.co/nbFSNW3cJ8

"Costumes should not become opportunities to turn a person's identity into a stereotyped image," the letter said. "While students might choose to dress as a famous person or character whose identity is different than their own, please reinforce the importance of not darkening skin or using makeup to change a child's skin color to match the person who they are dressing up to be. Students are often unaware of the long history these traditions have of causing harm and need our help in understanding why it can be hurtful and problematic."

In class, they have lessons on identity throughout the year and all the parts of ourselves that go into identity.

"So having those conversations ahead of time allowed kids to see why somebody else's struggle shouldn't make up someone's Halloween costume," she said. "What's wonderful about children is once you help them see those things they don't ever want to create that situation ... and the kids are so eager to make the right choice, once you sort of show them the problems that exist."