Accessibility links
In Rebuke Of Turkey, House To Vote On Armenian Genocide Bill Lawmakers approved a resolution affirming that it is U.S. policy to recognize the genocide of 1.5 million Armenians at the hands of the Ottoman Empire, now modern-day Turkey. 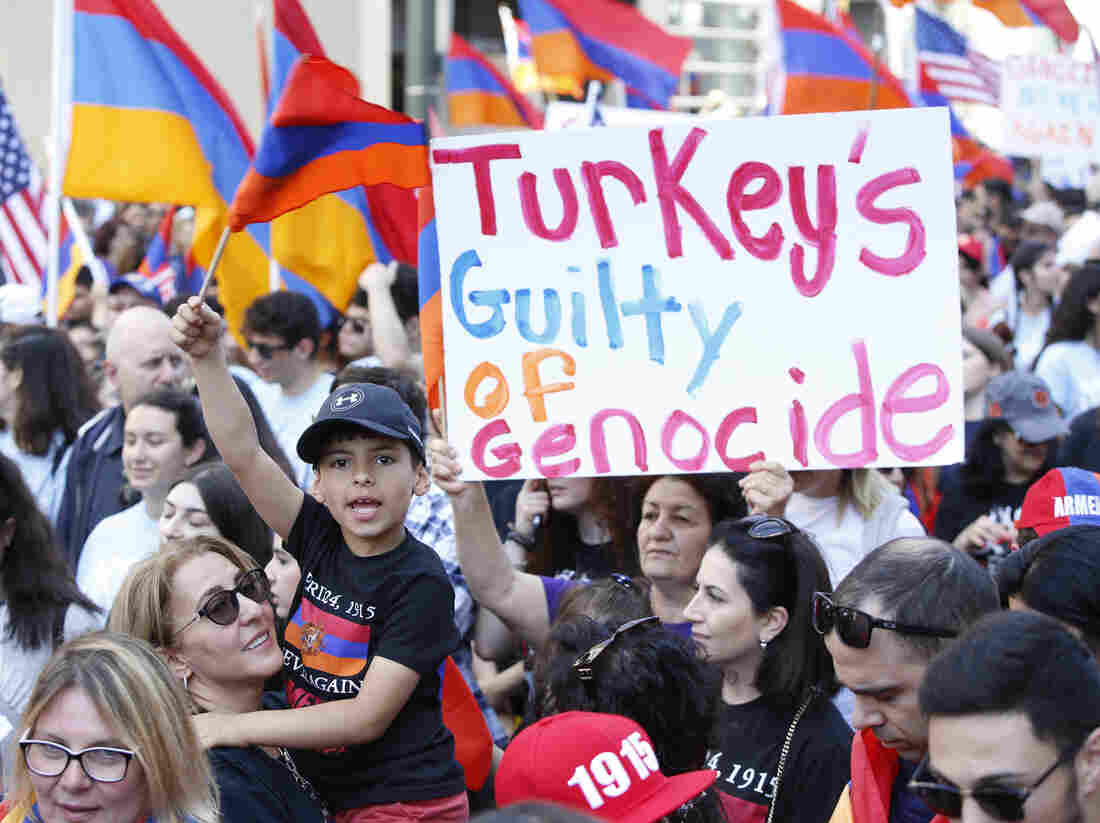 Armenian Americans march in Los Angeles on April 24 during an annual commemoration of the deaths of 1.5 million Armenians under the Ottoman Empire. Damian Dovarganes/AP hide caption 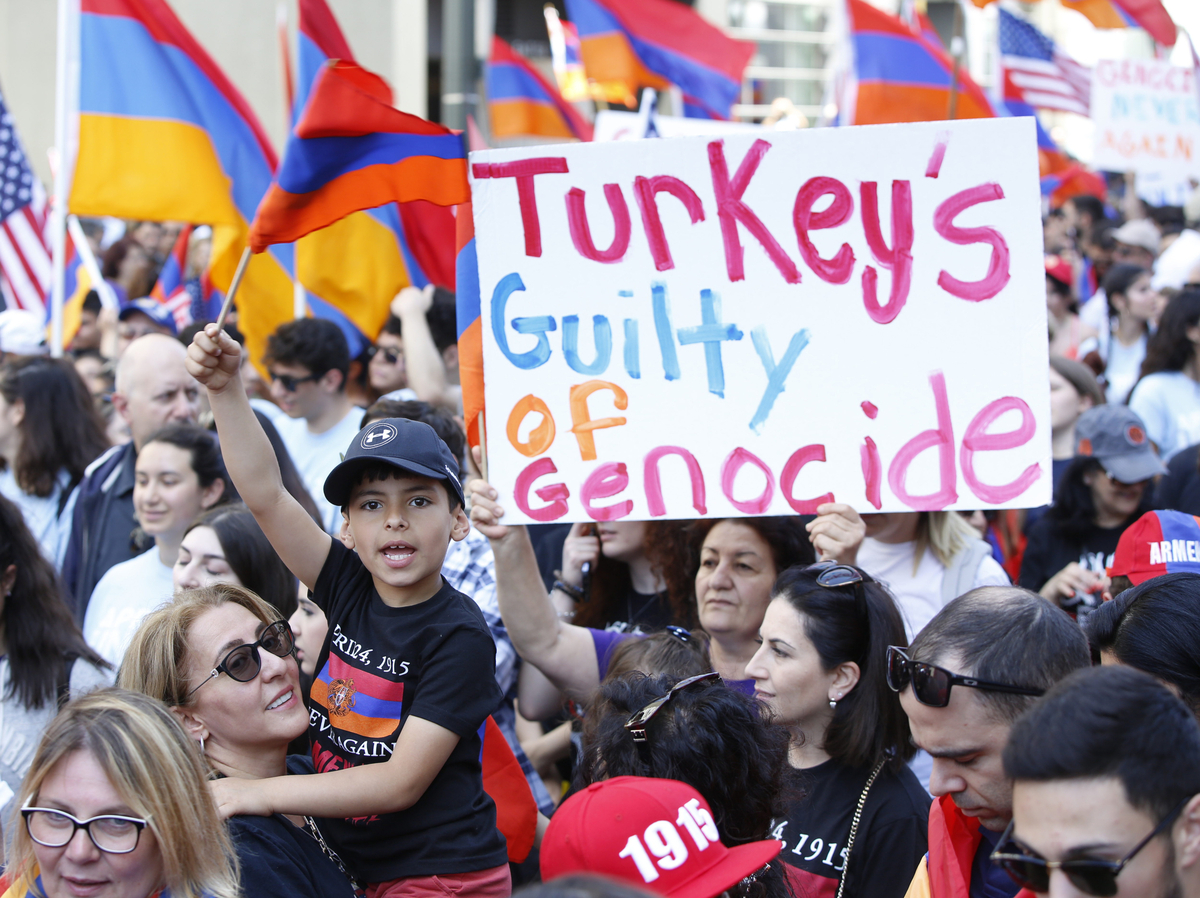 Armenian Americans march in Los Angeles on April 24 during an annual commemoration of the deaths of 1.5 million Armenians under the Ottoman Empire.

The House of Representatives approved two measures pushing back at Turkey, a sign of significant bipartisan ire at a longstanding NATO ally following the country's offensive into northeastern Syria.

The first measure was a symbolic resolution labeling the deaths of roughly 1.5 million Armenians from 1915 to 1923 in the Ottoman Empire, which is now modern-day Turkey, as a "genocide." It passed 405-11, with 3 members voting present.

Previous administrations prevented Congress from allowing a vote on this, arguing that it could damage the relationship with the Turkish government.

The second was a bipartisan bill that imposed sanctions on Turkish officials and prevents the sale of arms to Turkey for use in Syria. That passed overwhelmingly too – 403-16.

Senate Majority Leader Mitch McConnell has cautioned that sanctions should not be a first resort so it's unclear whether either of these measures will be brought up for votes in the Senate.

There was no such caution in the House. Both measures passed with veto-proof majorities.

"The United States needs to make sure that Turkish President Erdogan faces consequences for his behavior," said Rep. Eliot Engel, the Democratic chairman of the House Foreign Affairs Committee.

Rep. Michael McCaul, the highest-ranking Republican on that same committee, told NPR that the House was sending a clear signal with sanctions.

"I truly believe this will send another signal to Erdogan to stop ethnic cleansing, to stop this aggressive behavior," McCaul said. "And I think these two bills together will tie in very well."

One of the lead co-sponsors of the four-page resolution on the Armenian genocide is House Intelligence Committee Chairman Adam Schiff, D-Calif., who represents one of the largest concentrations of Armenian Americans in the United States. The resolution also enjoys support from many House Republicans, including Rep. Gus Bilirakis of Florida and Rep. Peter King of New York, both co-sponsors.

According to the Congressional Caucus on Armenian Issues, 49 states have already recognized that an estimated 1.5 million Armenians from 1915 to 1923 were systematically killed in the Ottoman Empire, which is now modern-day Turkey.

The resolution is a victory for Armenian Americans and their allies, who have long unsuccessfully lobbied Congress to recognize it. "We urge all members to support this bipartisan human rights legislation and ensure that the days of genocide denial are over and that America's proud chapter in helping the survivors of the first genocide of the 20th century is honored and preserved," said Bryan Ardouny, executive director of the Armenian Assembly of America.

In recent decades, the U.S. government has been coy about efforts to formally recognize those events out of fears of inflaming relations with Turkey, where the government denies that a genocide occurred. The Turkish government has traditionally deployed intense and effective lobbying efforts on Capitol Hill to discourage Congress from passing the resolution.

"We should have recognized that genocide again and again long ago," said Rep. Brad Sherman, D-Calif. "But we didn't because we were told that that we had a great alliance with Turkey."

U.S. lawmakers' attitudes toward Turkey have been degrading for years, most recently over Turkey carrying out military attacks against Syrian Kurdish forces that are allies of the U.S. fight against ISIS.

"There's an extremely high level of tension right now, which means particularly within the U.S. Congress right now, there is an almost unified sentiment against Turkey," said Hintz, adding that passage of the resolution will likely ratchet up tensions even further.

However, Hintz said the resolution could have unintended consequences, including bolstering Turkish President Recep Tayyip Erdogan's political strength back home. "It would be absolutely perfect timing for him," Hintz said. "I think a recognition of the genocide resolution, what that's going to do is unite the opposition, and the opposition is the only chance you have of defeating Erdogan."

There is a bipartisan Senate resolution by Sen. Robert Menendez, D-N.J., and Sen. Ted Cruz, R-Texas, recognizing the Armenian genocide as well. Republican Sens. Marco Rubio of Florida and Cory Gardner of Colorado are among the co-sponsors. All four senators are members of the Senate Foreign Relations Committee. However, the Senate plays a more direct role in shaping foreign policy and tends to take a less reactionary stance on such issues. There is no current plan to bring the resolution up for a Senate vote.

The Trump administration has not yet weighed in on the House resolution. In recent decades, both Republican and Democratic administrations have generally tried to avoid the Armenian genocide debate. Turkey is a NATO member, stores many U.S. nuclear weapons and is a strategic military ally in regards to U.S. policy in the Middle East.

For example, President Obama declined to use the term "genocide," which some of his top administration officials later said was a mistake. "I'm sorry that we disappointed so many Armenian Americans," Samantha Power, Obama's U.N. ambassador, told the Pod Save the World podcast last year.