Accessibility links
'We Didn't See A Body': Baghdadi's Death Draws Doubts In Lands Where ISIS Ruled In Iraq and Syria, the ISIS leader's death has stirred a mix of responses — from joy to disbelief to dread that the militants will rise again. 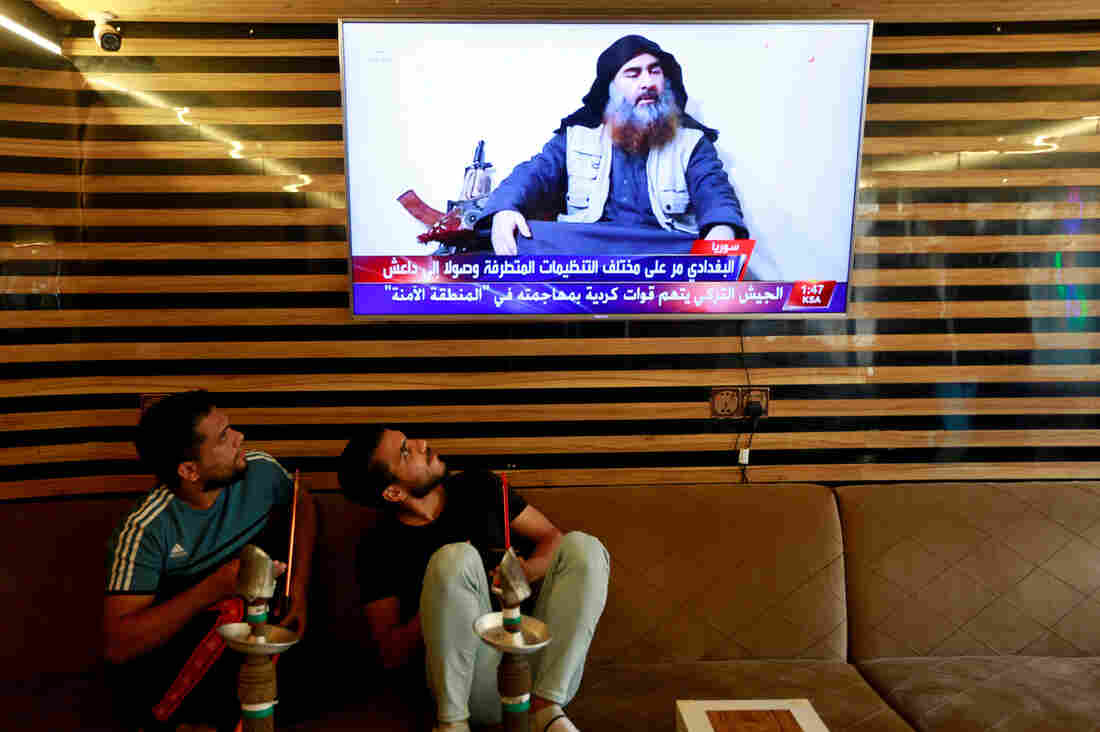 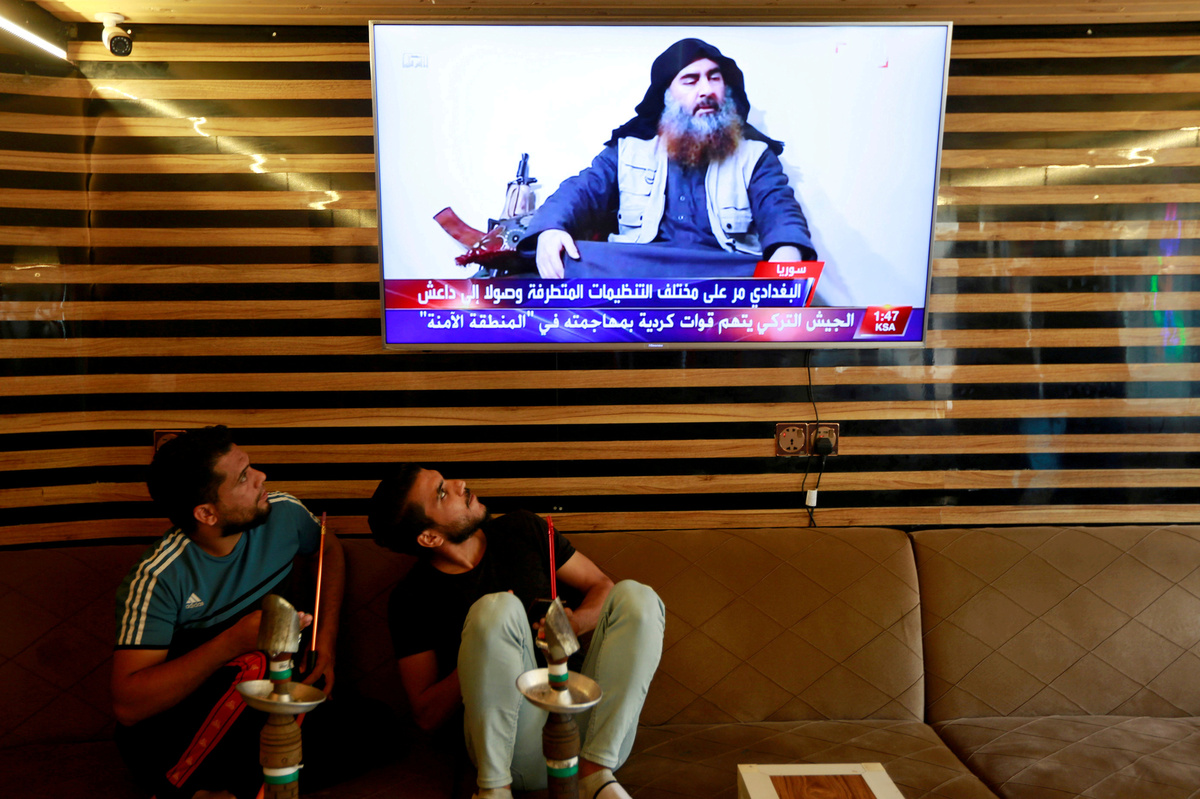 In Iraq and Syria, news of ISIS leader Abu Bakr al-Baghdadi's death has stirred a mix of responses — from joy to disbelief to dread.

Since President Trump announced this weekend that Baghdadi died during a U.S. military operation in Syria, analysts have been grappling with the implications for the militant organization that has now lost its main chief in addition to all the territory it once held in Iraq and Syria.

ISIS Leader's Death Met With Joy And Skepticism In Mosul

ISIS Leader's Death Met With Joy And Skepticism In Mosul

But in the lands that were under ISIS rule, conspiracy theories are swirling. While many are happy that the man behind much suffering is dead, residents are questioning the details the U.S. has offered about Baghdadi's demise and whether he died at all. Some even wonder whether he ever existed, suggesting how deep distrust of the U.S. government may run in this part of the world. 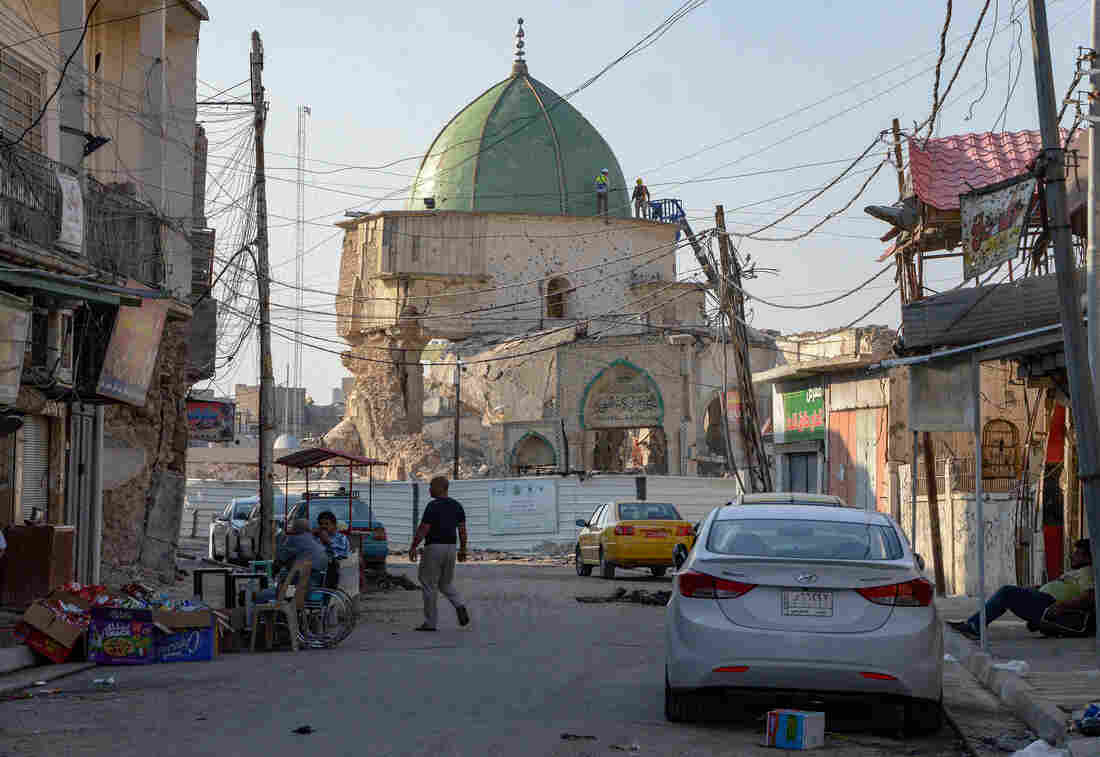 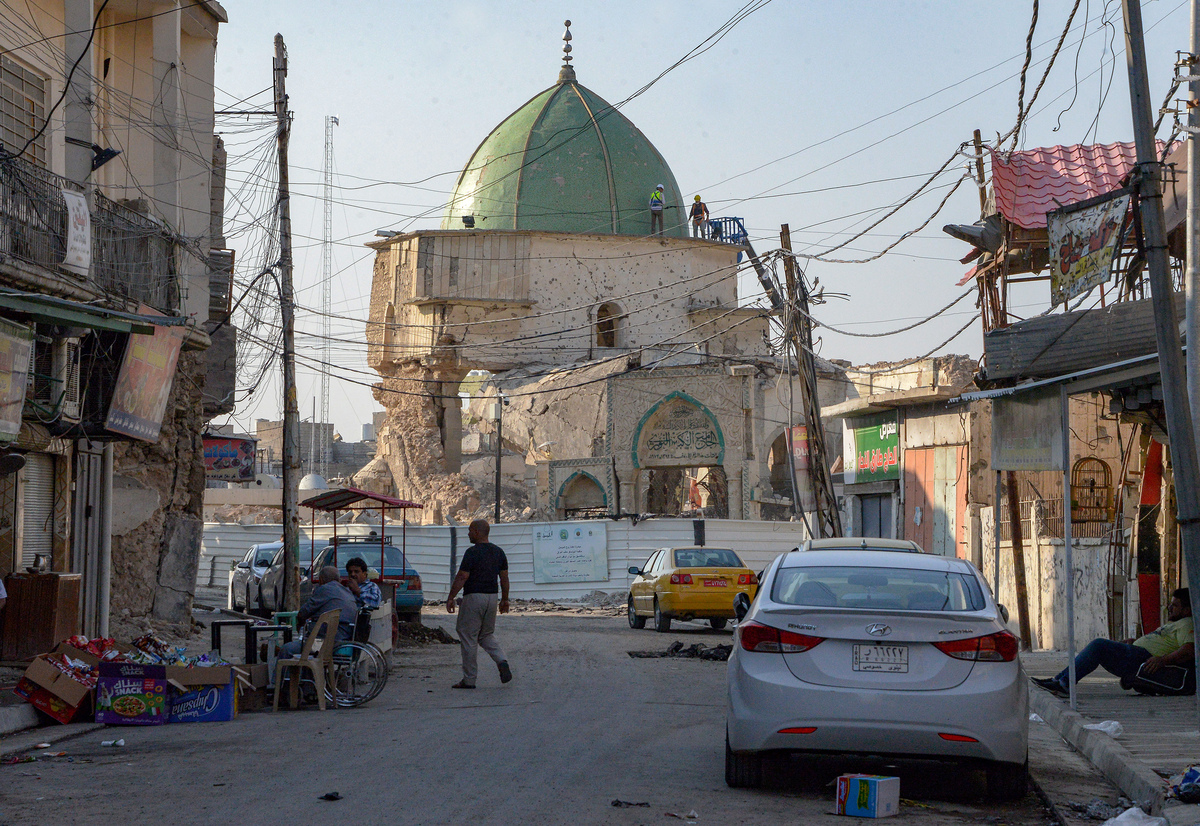 People walk near Mosul's heavily damaged Al-Nuri Mosque, where Baghdadi announced the launch of a caliphate in 2014.

Mosul is where, in 2014, the ISIS leader declared himself "caliph," claiming to be a successor to a historical Muslim figure. Baghdadi later went into hiding, while ISIS went on a rampage across Iraq and Syria, imposing its extreme interpretation of Islamic law, recruiting members from around the world to help slaughter civilians, soldiers and rival militants; take hostages for ransom; and women and girls as sex slaves.

Much of Mosul is still recovering from ISIS' three-year reign and from the destruction left by U.S.-backed forces battling the militants. Many families have relatives who were killed either by ISIS fighters or during the fierce fighting against them.

Mahmoud Saeed, a local imam, says he recalls the day Baghdadi came to the city surrounded by bodyguards and declared the start of the caliphate from the pulpit of al-Nuri Mosque. 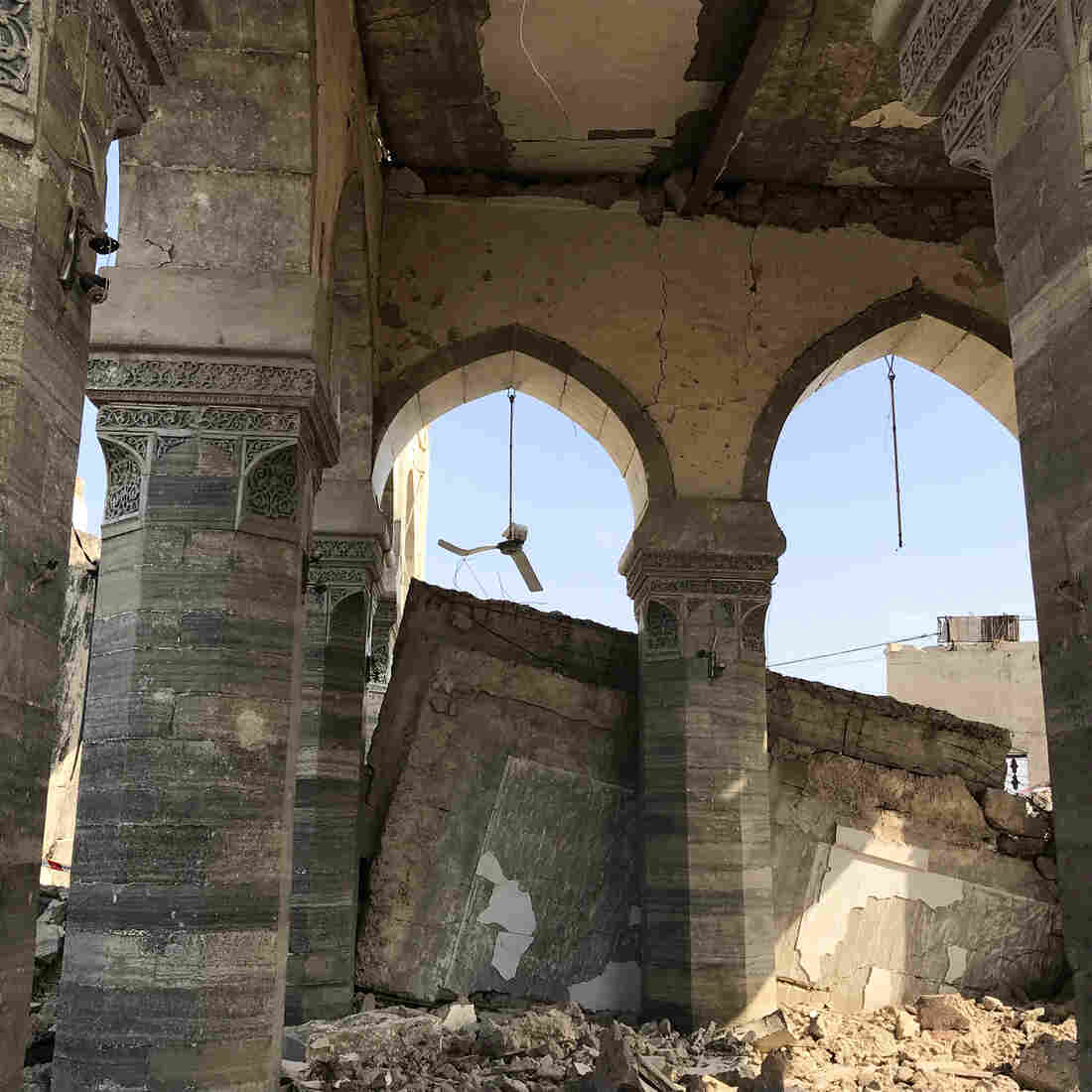 ISIS blew up the al-Nuri Mosque in the battle for Mosul before it was driven out of the area in 2017. Jane Arraf/NPR hide caption 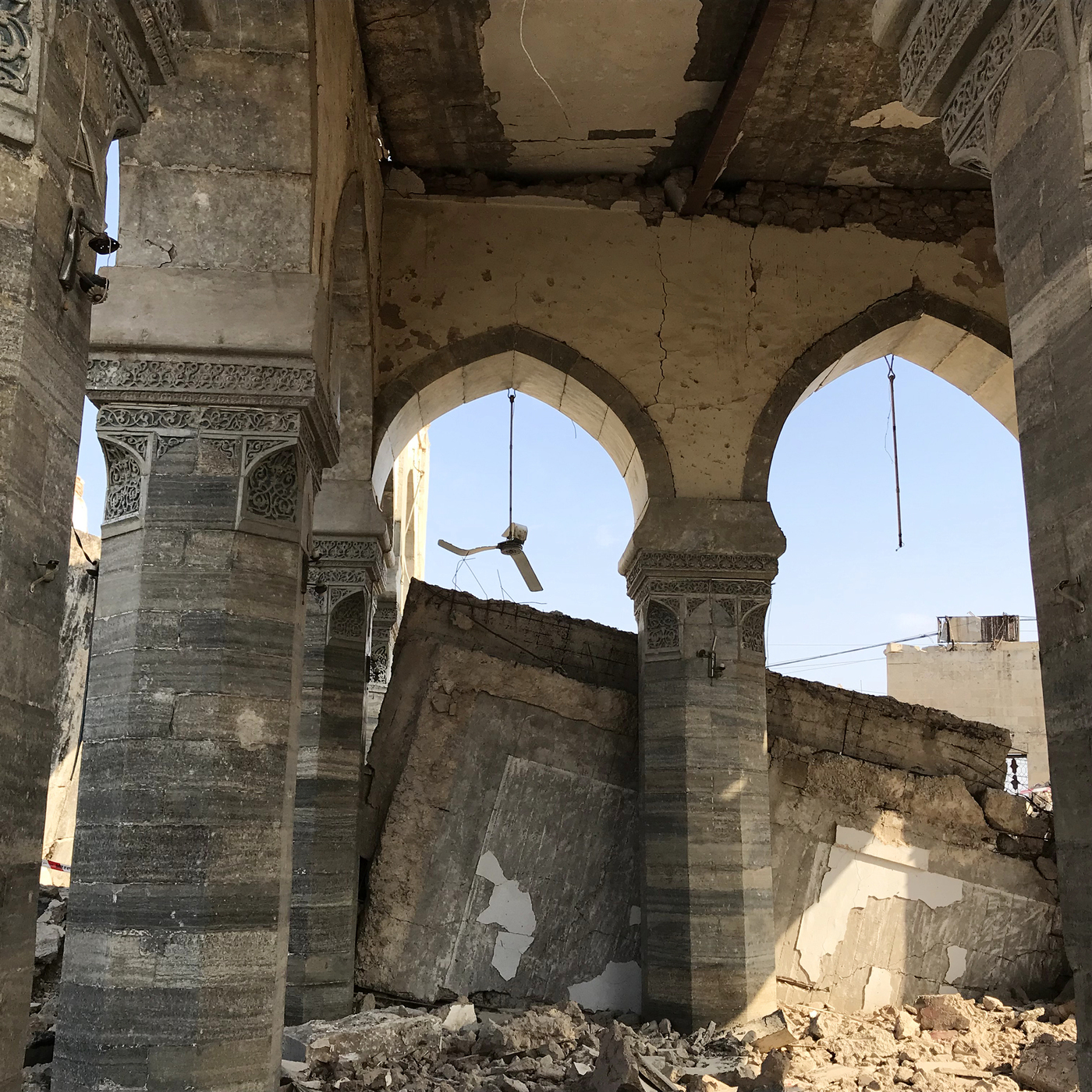 ISIS blew up the al-Nuri Mosque in the battle for Mosul before it was driven out of the area in 2017.

"We did not choose him," Saeed says.

Still, even after news of Baghdadi's death, Saeed and friends have been discussing whether he was invented by the U.S.

Mosul resident Marwa Khaled is with her 5-year-old son, Mohaiman, who's holding a plastic toy rifle almost as big as he is. Mohaiman never met his father, a police officer who was killed by ISIS. 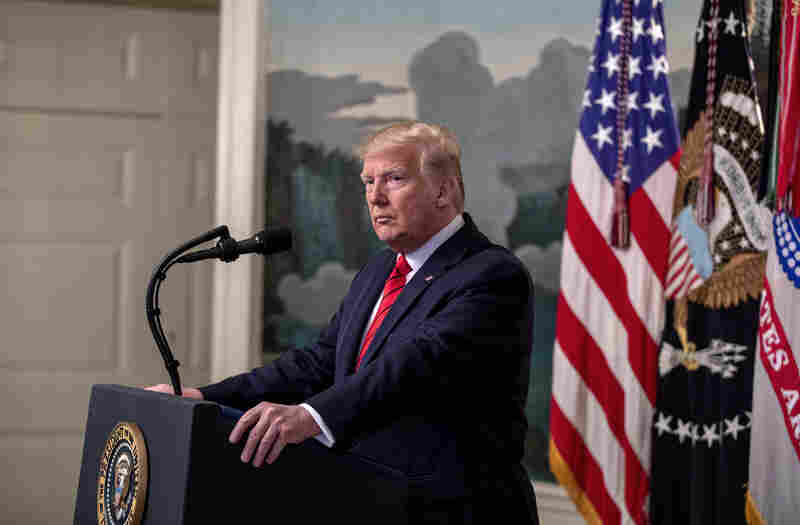 President Trump announced on Sunday that Baghdadi had died during a U.S. military operation in northwest Syria the night before. Tasos Katopodis/Getty Images hide caption 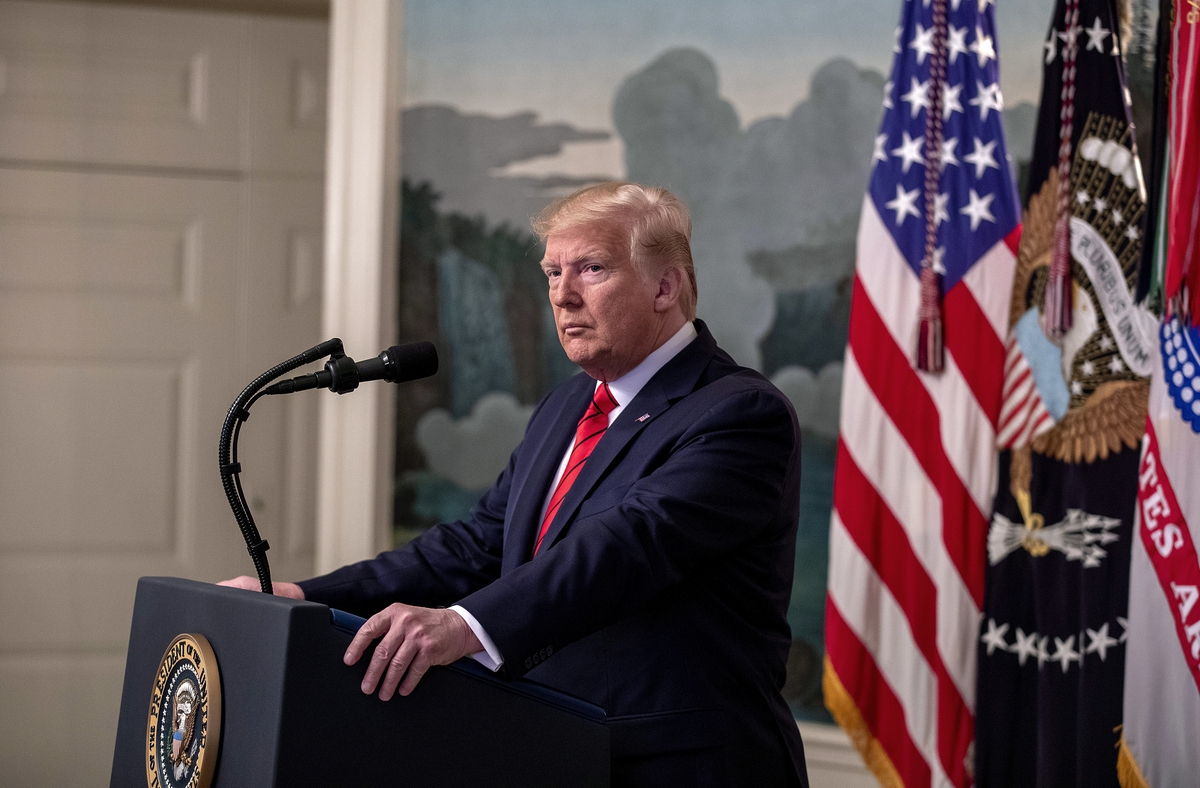 President Trump announced on Sunday that Baghdadi had died during a U.S. military operation in northwest Syria the night before.

According to Trump, as U.S. special forces attacked the compound where Baghdadi was hiding out, the ISIS leader ran into a dead-end tunnel and detonated a suicide vest that killed him and three children.

Trump said he is considering making some of the footage of the raid public "so that [Baghdadi's] followers and all of these young kids that want to leave various countries, including the United States, they should see how he died. He didn't die a hero. He died a coward."

Gen. Frank McKenzie, head of U.S. Central Command, told reporters on Wednesday that debris from the explosion in the tunnel was quickly analyzed and a DNA match with Baghdadi was confirmed, before the remains were buried at sea.

In spite of Trump's claims of victory over ISIS, Baghdadi's death does not represent the end of the group, says Mansour Marid, the governor of Nineveh, Iraq.

"This is only one page of the situation, and we presume there is another page to it," says Marid. "The important thing is to end the ideology, otherwise with these kind of men, one leader goes, another will come in his place." 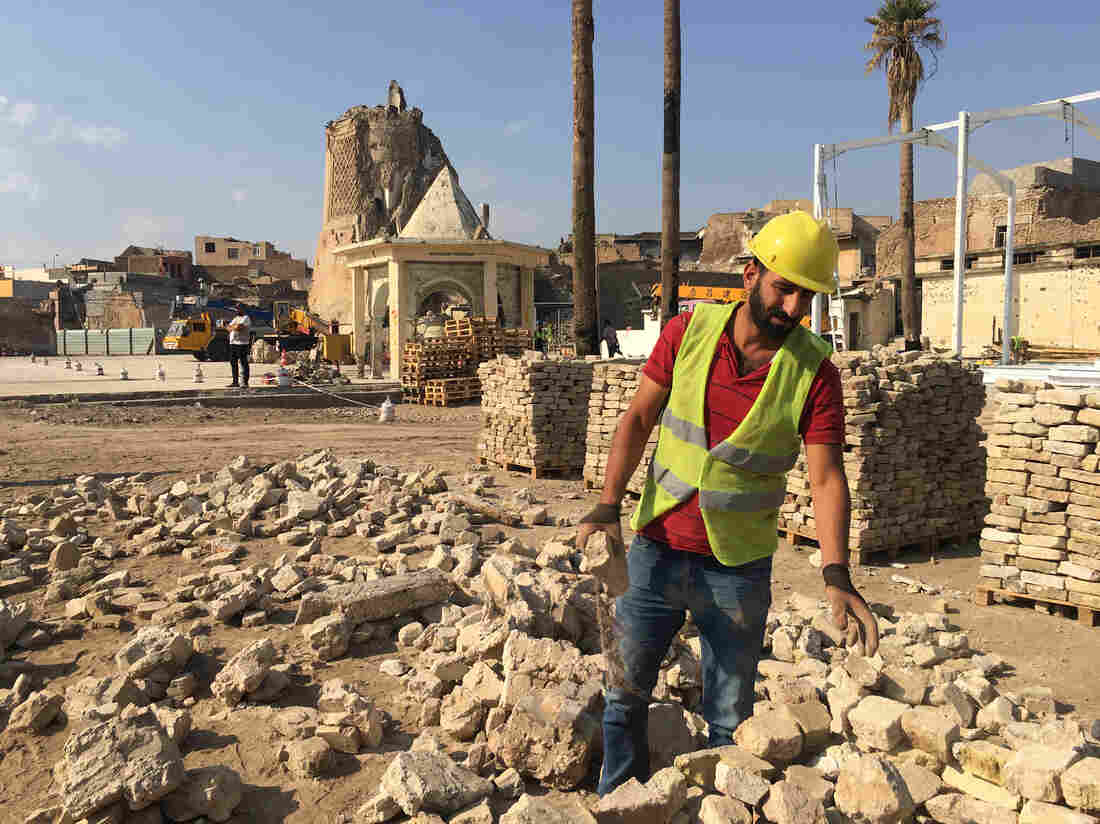 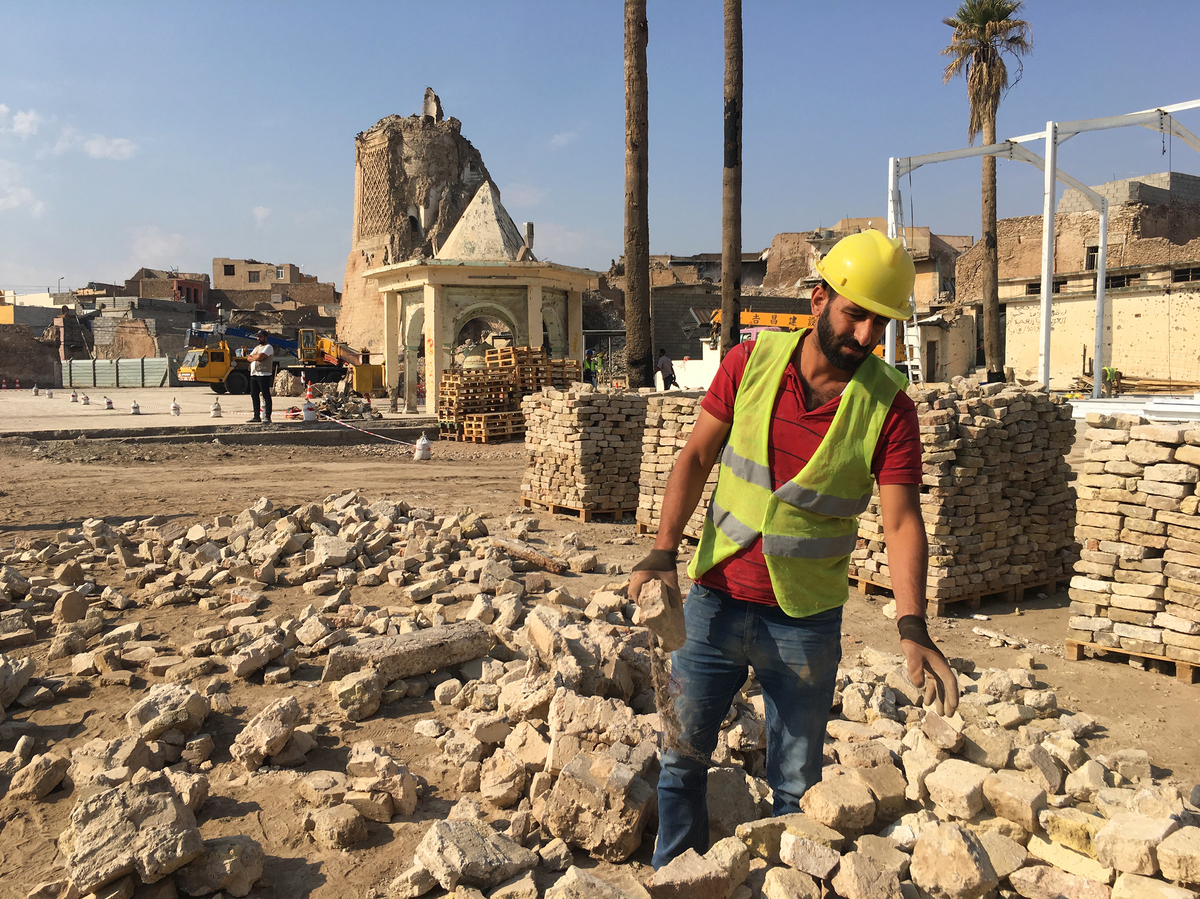 A worker in Mosul, Iraq, assesses the damage in the al-Nuri Mosque compound. Workers are reconstructing the mosque's al-Hadba minaret.

"Jaded about the United States"

Next door in Syria, many residents who spent years under ISIS rule say they're thrilled Baghdadi is dead.

"It's very happy news ... because it feels like he's a personal enemy," says Mohammed Kheder, who lived under ISIS and leads a group of Syrian researchers called Sound and Picture that documents the militants' atrocities. "ISIS committed numerous crimes against our sons. ... The person responsible for the death of their sons has died."

Kheder adds that families feel like "they have gotten their revenge, even if it's from someone who's also responsible for many deaths of their sons." The someone he's referring to is the U.S.-led coalition that defeated ISIS in its capital Raqqa, Syria, but used overwhelming firepower there, which rights groups say killed many more civilians than it did ISIS fighters. "People believe one criminal killed another criminal," he says.

This attitude doesn't surprise Jeremy Shapiro, the research director of the European Council on Foreign Relations, who worked on Syria policy at the State Department under the Obama administration. "People in that area are pretty jaded about the United States. The fact that they are not sad that Baghdadi is dead isn't going to change their opinion of us," Shapiro says.

In March, U.S.-led forces drove ISIS fighters out of their last held territory in Syria. Now thousands of suspected ISIS fighters are in prisons in the country, and their wives and children are in detention camps. The facilities are run by Syrian Kurdish forces, who have come under heavy attack by Turkey, following Trump's order for U.S. troops to withdraw from parts of Syria. 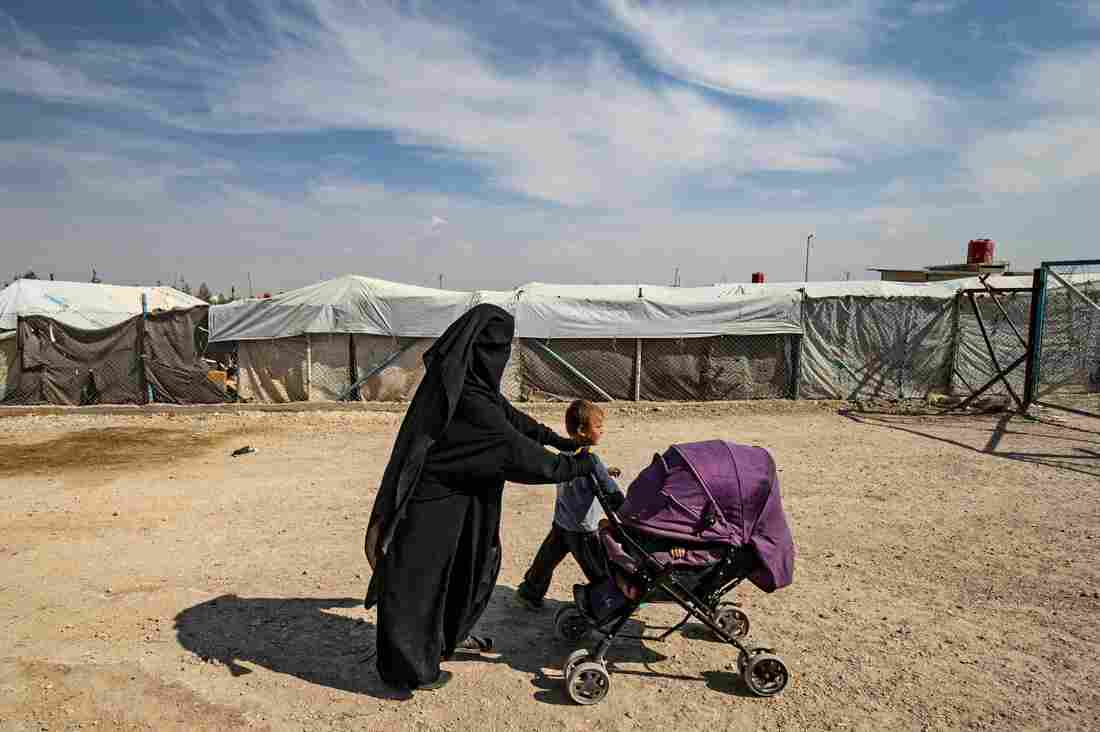 A woman walks with children at the Kurdish-run al-Hol camp where families of ISIS foreign fighters are held in northeastern Syria earlier this month. Delil Souleiman/AFP via Getty Images hide caption 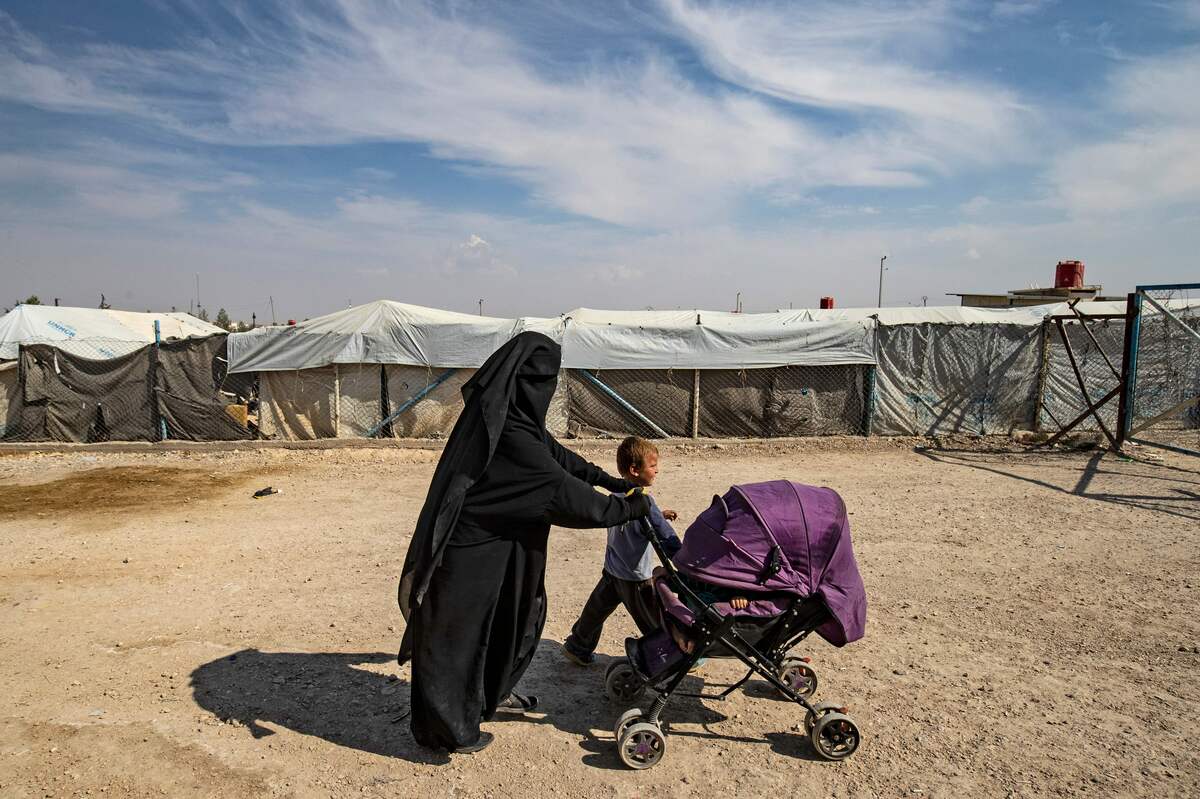 A woman walks with children at the Kurdish-run al-Hol camp where families of ISIS foreign fighters are held in northeastern Syria earlier this month.

NPR contacted a Syrian humanitarian worker who is in touch with detainees in al-Hol camp in northeastern Syria to hear what they are saying about Baghdadi's death. He called them on their smuggled cellphones and provided recordings of some detainees.

"We are all soldiers of Baghdadi ... but the jihad hasn't stopped," says one of the women, an Iraqi. "And there's nothing to prove he died. We heard in the news. It's been a rumor numerous times. As warriors, we believe that even if Baghdadi dies, the caliphate will not end. ... We aren't just here for one person."

"If Baghdadi is dead, there are tens of thousands of Baghdadis," says another detainee, speaking in French. "Do not think we are over. We are like a boiling volcano in constant eruption."

Some of the women in the camps say they regret joining ISIS. One Tunisian woman tells NPR she is relieved Baghdadi is dead. "He will be rewarded with hell," she says.

But she and some of the other women detained with her do not trust Trump's account that Baghdadi died in a cowardly way, she says. "Nobody believes Trump's tales."