Accessibility links
No Bowhead Sightings Yet For Alaskan Whalers. Some Blame Climate Change Members of the Utqiagvik community captured almost 20 bowhead whales last year. Families divide the meat and eat it all winter. This year, the whales haven't shown up, amid record warm temperatures.

No Bowhead Sightings Yet For Alaskan Whalers. Some Blame Climate Change

No Bowhead Sightings Yet For Alaskan Whalers. Some Blame Climate Change 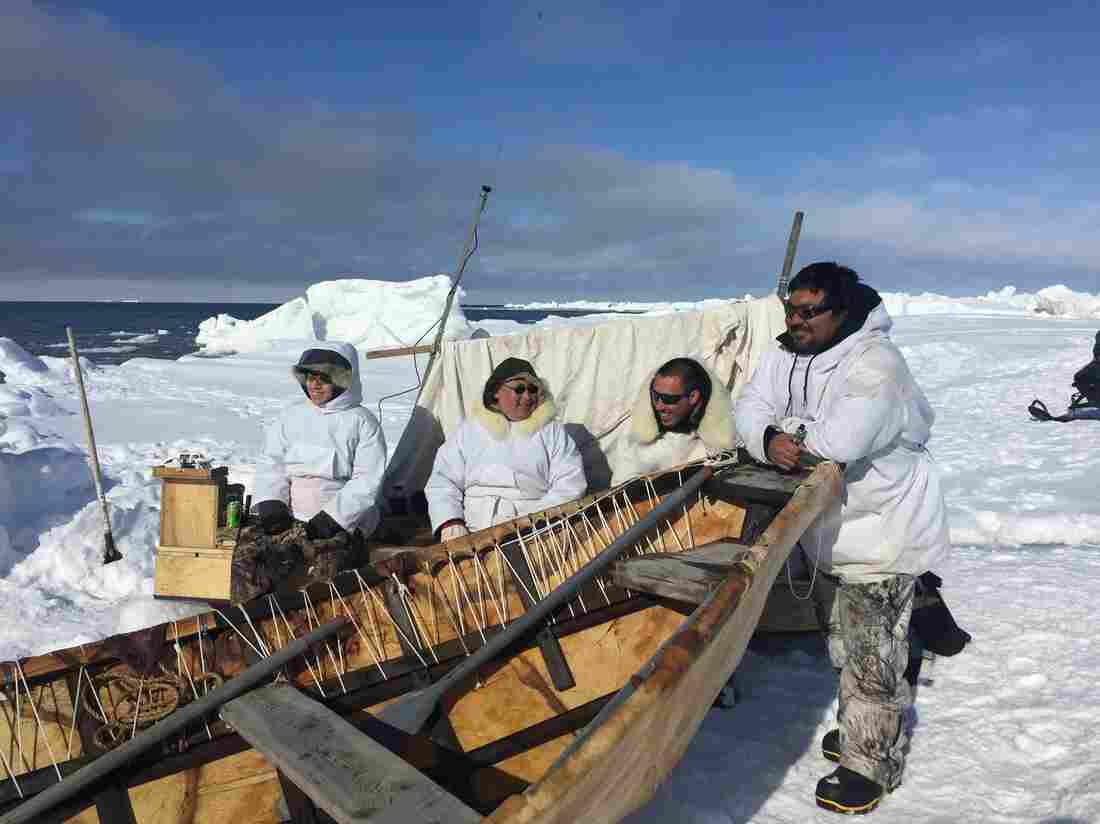 Utqiagvik whalers use many traditional tools, including the sealskin boat, or umiak, during the spring hunt. Ravenna Koenig/Alaska's Energy Desk hide caption 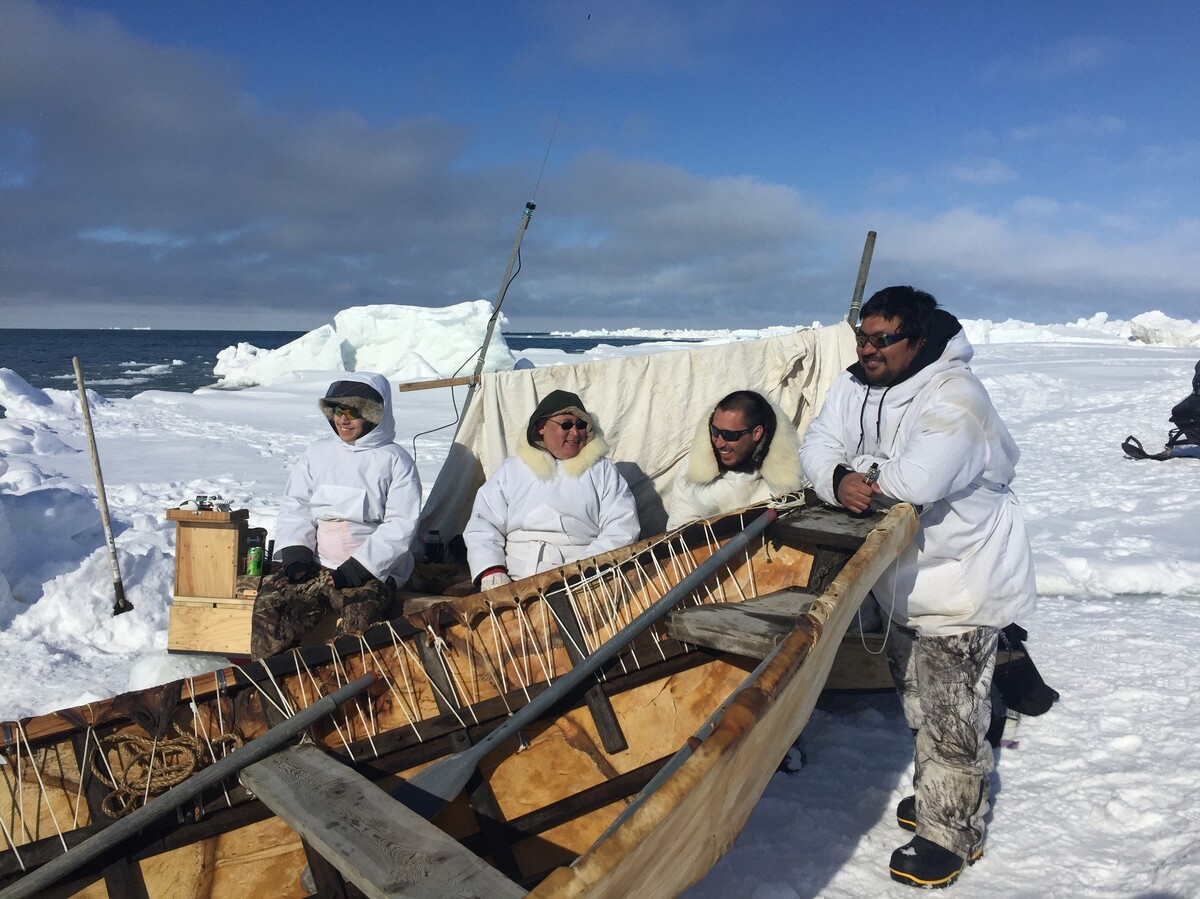 Utqiagvik whalers use many traditional tools, including the sealskin boat, or umiak, during the spring hunt.

The bowhead whale hunt is an essential cultural and subsistence tradition for the Inupiat of Alaska's North Slope. It dates back at least 1,500 years, and annual harvests can supply families with hundreds of pounds of meat.

"It is the way of our life, and it's why we are who we are," said Deano Olemaun, a top official at the North Slope Borough.

Each fall, captains from Alaska's northernmost community, Utqiagvik, drive their powerboats 10 to 20 miles offshore to hunt whales. Usually by this point in the season, successful crews have towed dead bowheads back to town, divided up the meat and shared it with friends and family, who eat it through the winter until the whales return on their spring migration.

But this year, a month into the fall hunt in Utqiagvik, the bowheads still haven't shown up.

Whaling crews have not landed a single one, which some residents say is unprecedented for a town that last fall captured nearly 20. And federal scientists say their airborne surveys have shown bowheads much farther offshore than their usual range.

Also unprecedented are this year's temperatures: It was the warmest May through September on record in Utqiagvik, and there's never been less ice offshore in the combined Chukchi and Beaufort seas at this point in the year, according to Rick Thoman, a climatologist with the Alaska Center for Climate Assessment and Policy. And some in the village think the whales' behavior is connected to the environmental changes.

"This is a very important food source to us, and we have nothing to date," said Eugene Brower, a retired whaling captain with a son who has been hunting bowheads "constantly," without success.

"We're being heavily impacted up this way," Brower said. "This is the first time we ever encountered a season with no whales being sighted."

There are several dozen crews in Utqiagvik. Last fall, they landed 19 bowheads by Oct. 23; this year's fall harvest opened Sept. 21, and none have been captured since then.

Crews were still on the water last week, though, and some experts said there's still time left in the season.

"It is not unusual for Barrow whalers to be hunting into the month of November," Arnold Brower, executive director of the Alaska Eskimo Whaling Commission, said in an email, using the old name for the town before it was changed in 2016. He added: "Patience is usually the best strategy."

Other North Slope villages have had successful hunts this fall, east of Utqiagvik in Kaktovik and Nuiqsut. But whalers haven't even been spotting bowheads near Utqiagvik, said Brower, a former president of the Barrow Whaling Captains Association.

"They spotted some gray whales out there," Olemaun said. "But no bowhead."

The whalers' experiences align with those of federal scientists, who flew in small planes this summer and fall doing aerial surveys of the Chukchi and Beaufort seas.

Megan Ferguson, a National Marine Fisheries Service research biologist, spent up to five hours at a time in the air, plotting whale sightings on a chart, as the plane flew in long lines about 20 miles apart, as far as 150 miles offshore.

Near Kaktovik, where whalers were successful, bowheads were observed farther offshore than in typical years. But there were also still "a good number of whales," close to shore, Ferguson said.

But as the flights started moving west of Kaktovik, toward Utqiagvik, "everything was shocking," she said. The whales were far offshore compared with where scientists usually see them. 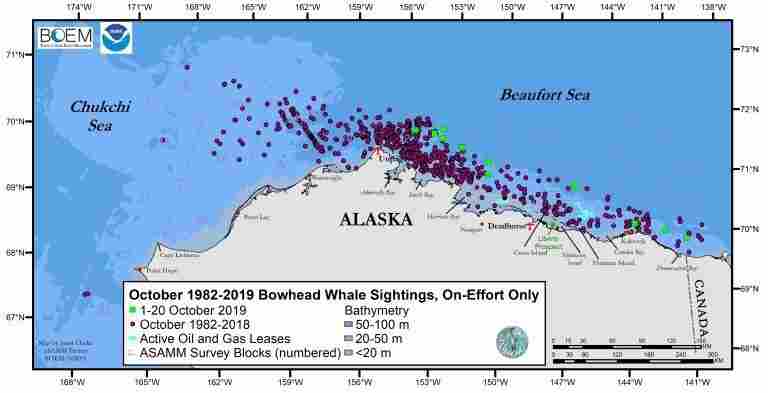 A chart from Megan Ferguson's research shows how bowhead spottings during surveys this October (the green squares) were farther offshore than most of the other bowhead spottings from October surveys dating back to 1982 (the purple circles). Graphic courtesy NOAA/BOEM hide caption

"Having the map right in front of me, it was pretty striking," Ferguson said. She added: "We don't have anything close to shore."

"There's no doubt that the ocean climate has never been like this, that we know of," he said.

This year, Utqiagvik had its longest-ever recorded stretch, 85 days, with temperatures staying above freezing. Water temperatures north of the village are the warmest on record for this time of year, Thoman said.

But up until this fall, the bowheads' migration past Utqiagvik had been relatively steady in spite of the dramatic environmental changes happening in the area, said Craig George, a longtime North Slope Borough wildlife biologist. The spring migration has been trending earlier, but the fall harvest has been relatively stable until this year, he said.

"It's pretty abrupt," he said. 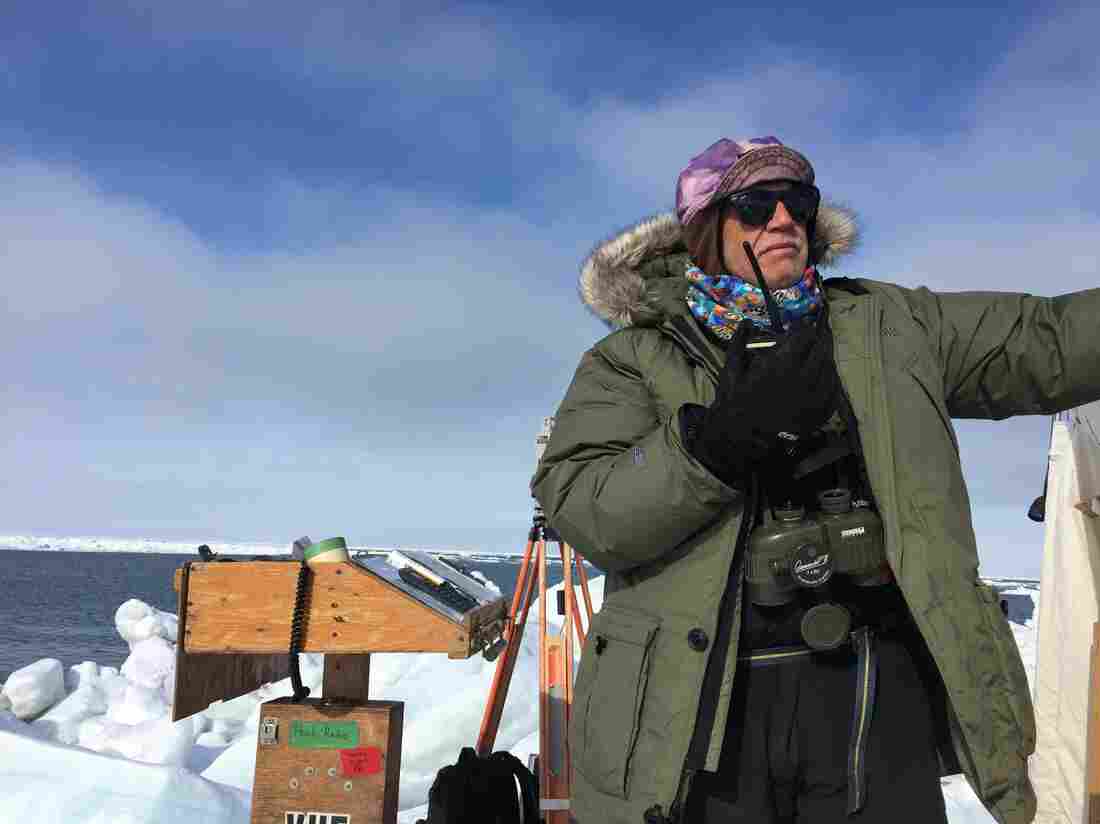 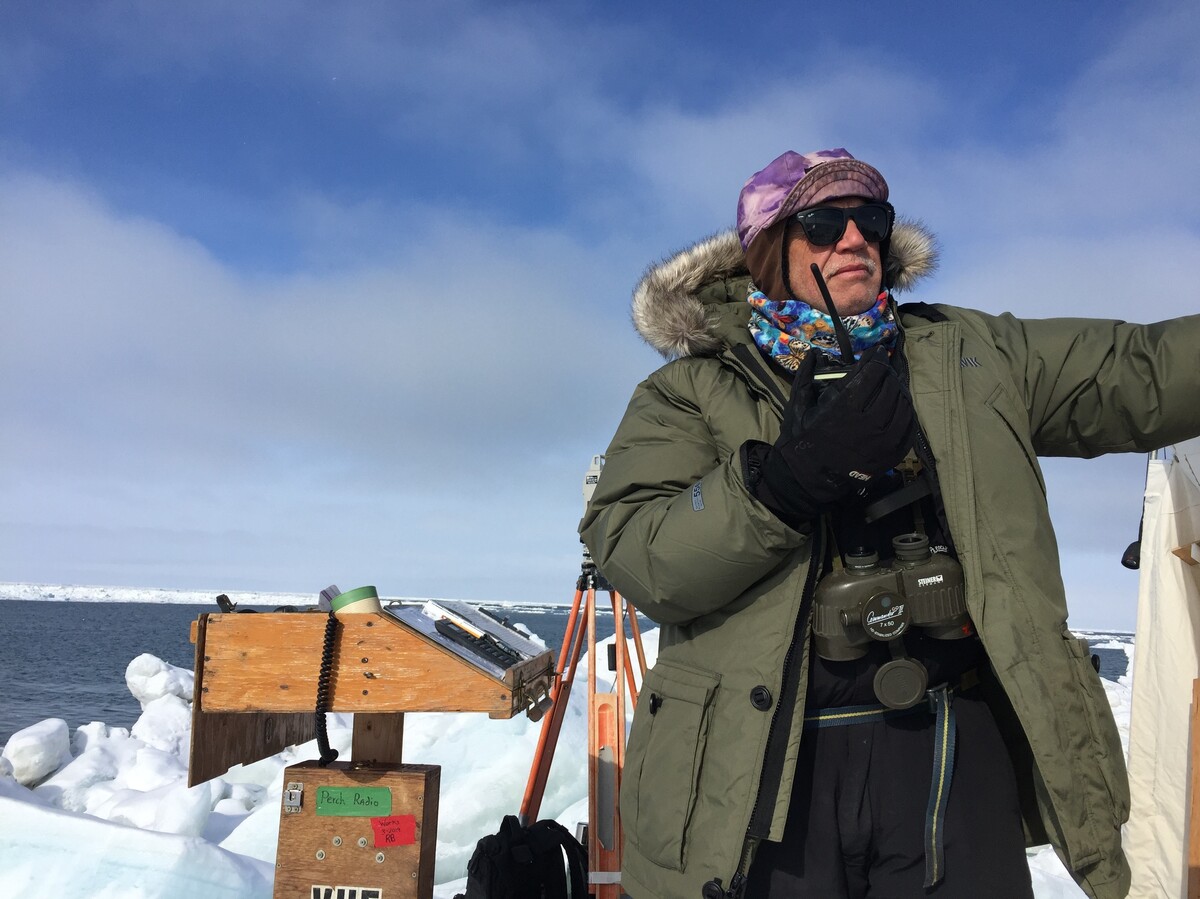 North Slope Borough wildlife biologist Craig George says until this year bowhead migration has been pretty steady despite changes in the environment.

Whalers and scientists both said the bowheads' location might have to do with where they're finding their food, plankton. Whalers also said the winds have kicked up waves that have made bowheads more difficult to spot.

Another hypothesis is that the water closer to shore is warmer than the whales can tolerate, so they've moved farther offshore.

George, the borough biologist, said he is perplexed and concerned by the change. But he also said it appears that this year was a strong one for bowhead calves, which is generally a good indicator of the species' overall health.

One thing that's clear to Brower, the retired whaler, is that unless things turn around, there won't be a lot of whale meat stored away in Utqiagvik this winter.