Accessibility links
Nirmal Purja Summits World's 14 Highest Peaks In 6 Months, Smashing Record "I hope to have proven that anything is possible with some determination, self-belief and positivity," said climber Nirmal Purja. The previous record-holder took more than seven years longer. 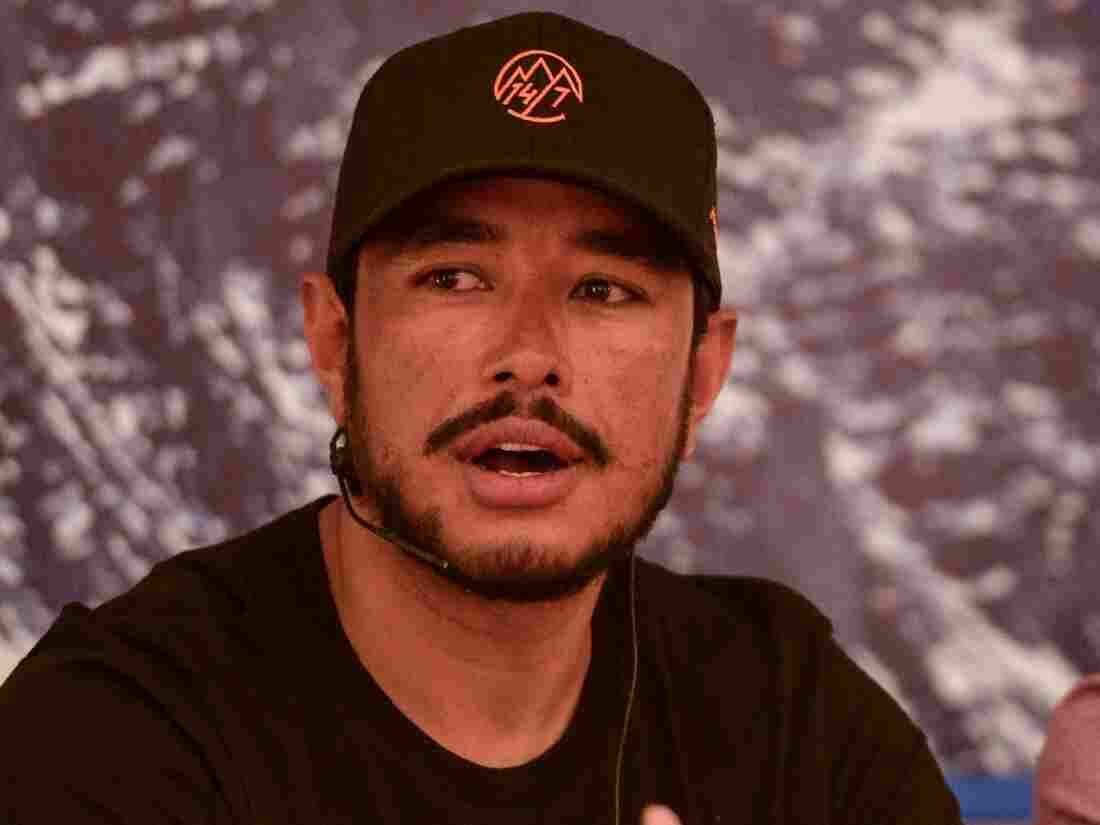 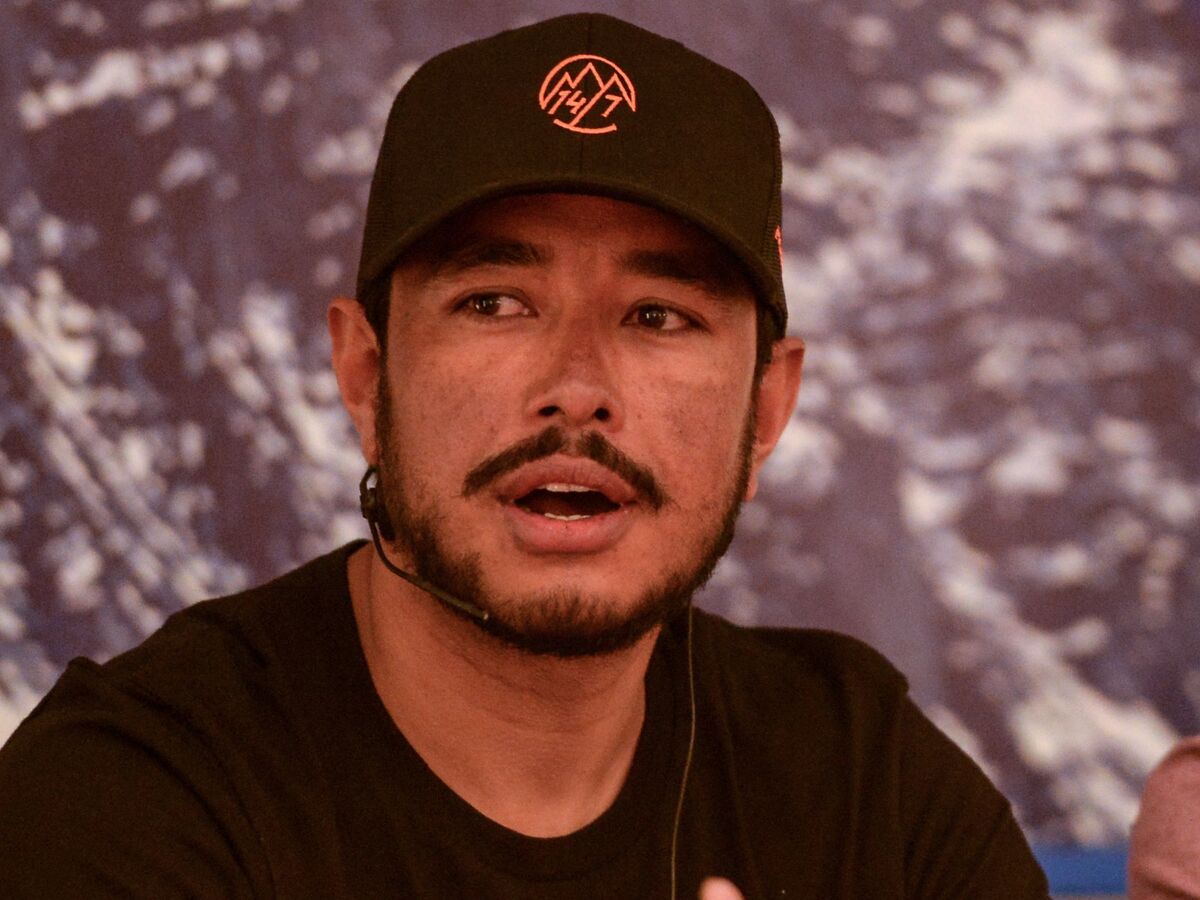 Mountaineer Nirmal Purja, shown here at a press conference in May, has climbed the world's 14 highest mountains in six months.

A Nepalese climber has summited the world's 14 highest peaks in six months and six days, smashing the previous record by more than seven years.

Nirmal "Nims" Purja, who served in the British military before attempting the lofty feat, reached the top of Mount Shishapangma in China on Tuesday morning. The Himalayan summit is some 8,027 meters (26,335 feet) above sea level. It's also the smallest of the 14 mountains on Earth that soar above 8,000 meters — a realm mountaineers refer to as the "death zone."

"I am overwhelmed and incredibly proud to have completed this final summit and achieved my goal of climbing the world's 14 tallest mountains in record time," Purja said in a statement. "It has been a gruelling but humbling six months, and I hope to have proven that anything is possible with some determination, self-belief and positivity."

The two most recent records for climbing the world's tallest 14 peaks were held by Polish climber Jerzy Kukuczka, at 7 years, 11 months and 14 days, and South Korean climber Kim Chang-ho, who did it more than a month faster than Kukuczka.

Wait till the end !

Yesterday, we had a pretty tough day. We climbed for 15 hrs non stop in an extreme weather conditions with the wind speed of more than 75 km/hr. Spent more than 3 hrs finding the way/route on the glacier.#nimsdai #BremontProjectPossible #14peaks7months pic.twitter.com/w2TNILtmtr

A video from Purja's trek up the final mountain illustrates some of the challenges the team faced earlier this week – what Purja termed a "pretty tough day."

The climbers were blasted by wind and snow.

"We climbed for 15 hrs non stop in an extreme weather conditions with the wind speed of more than 75 km/hr. Spent more than 3 hrs finding the way/route on the glacier," Purja said. On that same day, an avalanche also threatened the climbers, according to Purja.

"MISSION ACHIEVED!" he announced from the summit of Shishapangma on Tuesday morning.

Purja, who was born in a village in Nepal more than 2,000 meters above sea level, kicked off his journey in late April by reaching the peak of Nepal's Annapurna. He dubbed the 14-peak goal "Project Possible."

From Annapurna, Purja quickly climbed five of the world's tallest mountains in May, including Everest. A photo he took on Everest showed a long line of climbers waiting to reach the summit, which quickly went viral.

The crowds in the photo highlighted concerns about a high death toll this year on Everest, where at least 11 climbers died. As Sushmita Pathak reported for NPR, "It prompted Nepal to revise rules on who gets to climb the world's highest peak."

Along with his background in Nepal and making long treks on a daily basis, Purja credits the training he received in the British military for helping him accomplish the rapid-turn-around climbs. He joined the Brigade of Gurkhas in 2003 and later joined the special forces unit of the U.K.'s Royal Navy.

"It is about the recovery between the mountains which will be my physical challenge; then it will be the mental challenge to move on to the next mountain," he said before completing the climbs.

Purja said he shattered the record "with a rotating support team made up of exclusively Nepalese climbers." He summited five peaks in Pakistan in July.

According to the BBC, last month "his challenge was held up while he waited for permission to climb the final mountain, Shishapangma, in the Tibetan autonomous region of China." That permission came through earlier this month after Nepal's government requested help from China, the broadcaster added.

According to Purja's website, his personal achievement wasn't the only record set by the team. Mingma David Sherpa, who accompanied Purja on nine of the climbs, also became the youngest person to summit all 14 of these peaks.

During the course of their climbs, Purja and his team members say they rescued at least three other mountaineers who were in trouble.