Accessibility links
Megan Thee Stallion Will Drop Her Debut Album Next Year, Complete With New Alter : All Songs Considered After her Tiny Desk performance, the rapper joined NPR's Sidney Madden for a live conversation on playing with a band for the first time, hanging onto her Texas roots and plans for her debut album.

Advisory: The audio on this page contains profanity 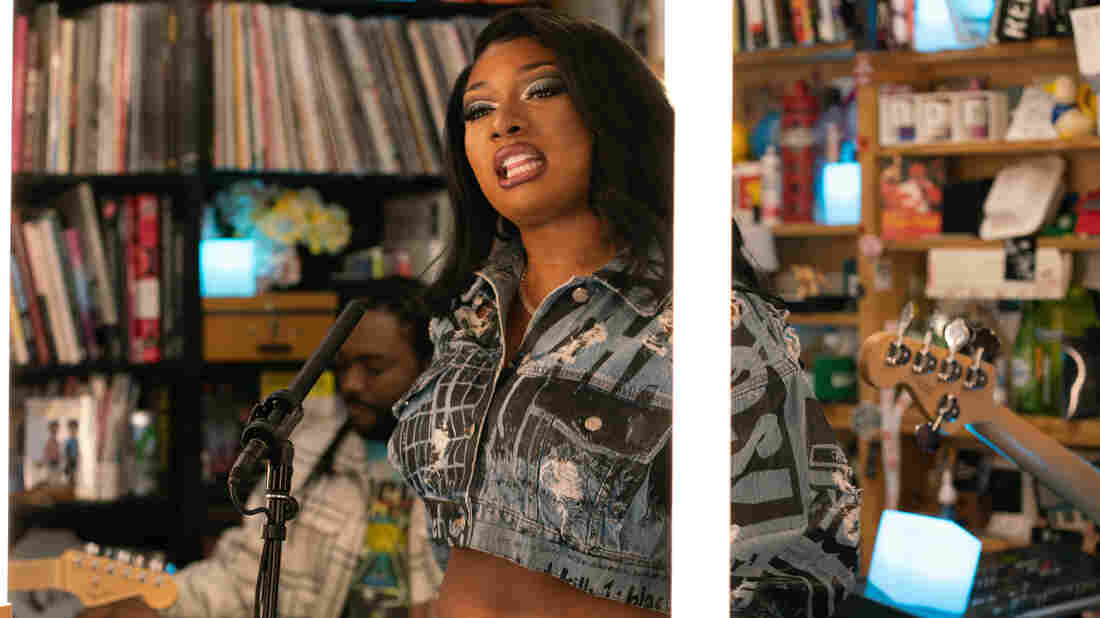 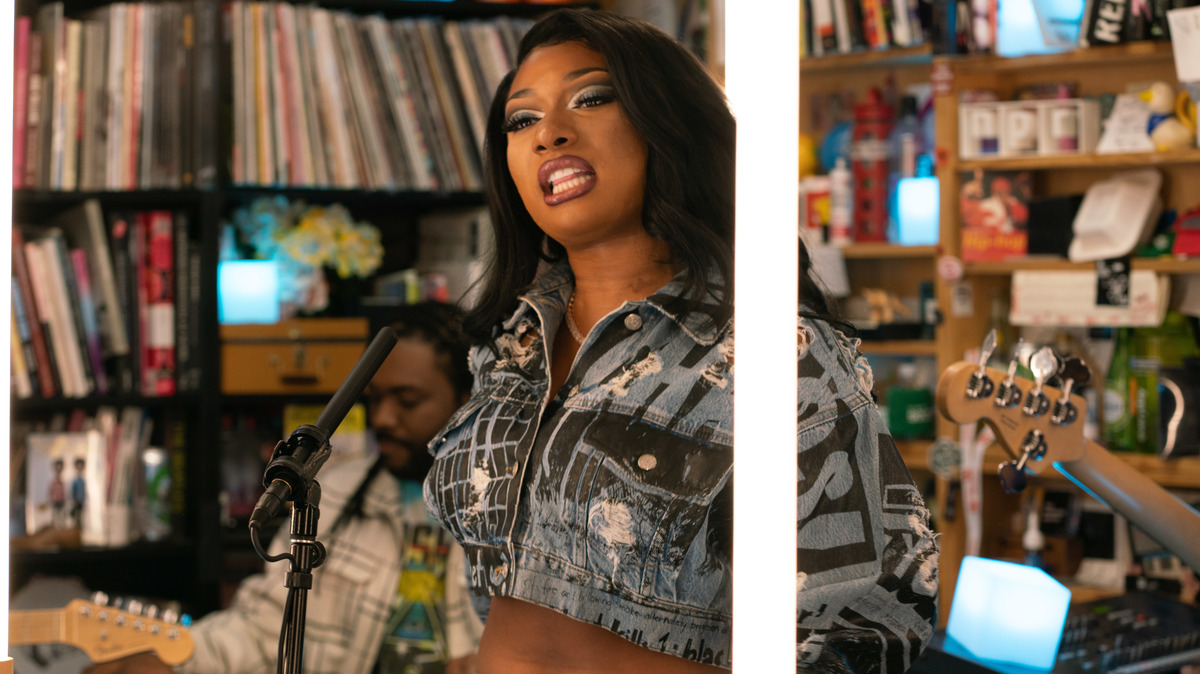 Megan Thee Stallion christened night one of NPR's Tiny Desk Fest with excitement, charisma and crazy bars. From "Hot Girl Summer" to "Cash Sh**," the Houston rapper's hits took on new life thanks to live instrumentation from Brooklyn band Phony Ppl. The artists even premiered a new song for the crowd in D.C. and the many more streaming the show live. (That performance will be up soon.)

And since this was not your normal Tiny Desk concert, after the show came the afterparty. Following the performance, Megan and the audience headed down to NPR's Studio 1 events space for a post-show conversation about performing with a live band for the first time, holding onto her Texas roots in the midst of rising stardom and what she sees for herself in the future. 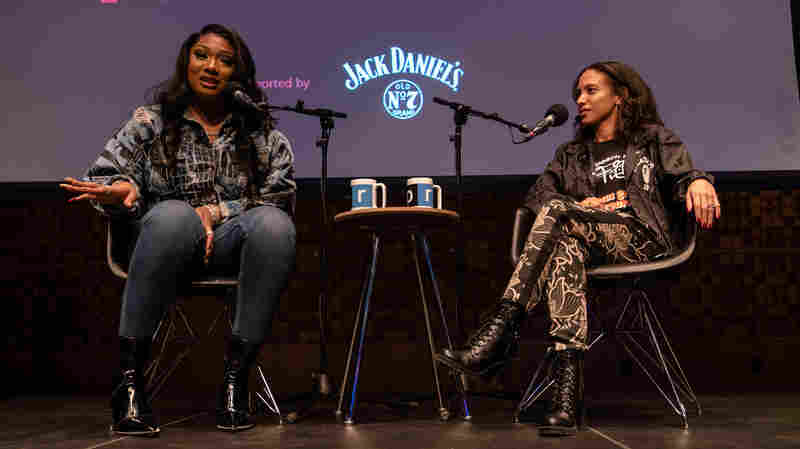 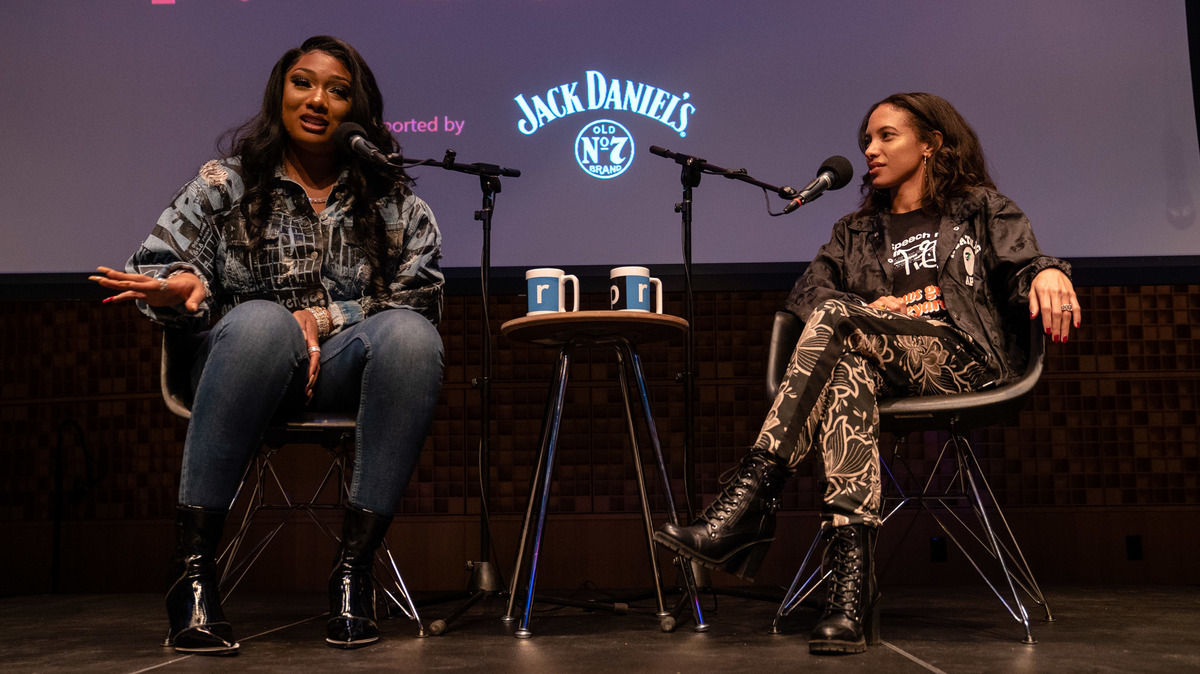 "I'm always trying to one-up myself. I don't feel like I'm in competitive with anybody," Megan Thee Stallion says.

"It was a super shock to me, going from a lot of bass, 808s, to some chill sh**," Meg said of performing with Phony Ppl rather than a DJ. "I'm like, 'This is so calm. I don't know if they're gonna feel me!' But as soon as we started playing together, I was like, 'Oh wait, I can get into this.' And I loved it."

An H-Town native raised on Southern greats like UGK, Three 6 Mafia and Slim Thug, as well as East Coast icons like Lil' Kim and The Notorious B.I.G., Megan has drawn on her influences and an impressive imagination to hone her lyrics. Like any imaginative rapper, she has no shortage of alter egos with distinct voices: There's Hot Girl Meg for playful, summertime fun, Thee Stallion for her sexpot mood and Tina Snow for boss moves. As Meg explained, it was Thee Stallion who jumped out at the desk, but there are still sides of her left for us to meet.

"There's a lot of people up here," she said laughing and pointing to her temple, just next to her cut-crease eyeshadow. "My next project I will be introducing a new lady. Her name is Suga. She's besties with Tina Snow." That character, she promised, will arrive on her debut album, due out next year.

"I felt like my mixtapes were me flirting with my fans," she said. "I never wanted to do an album 'cause I was like, 'Oh, that feel like marriage. That's a commitment.' But now, I'm ready to settle down with an album."

Tiny Desk Fest: How To Watch It Live

Settling down doesn't mean settling for any less than her best, though. "I'm always trying to one-up myself. I don't feel like I'm in competitive with anybody," she said. "If I'm worried about beating somebody else, I'm not going to be the best version of me. It shouldn't be a competition because somebody else winning is not going to make me lose."

Meg says her work ethic comes from three generations of strong women — her mother, grandmother and great-grandmother — who inspired her to pursue a degree in healthcare administration even with her rap career in full swing. Currently a senior at Texas Southern University, she says she has "next level" plans to build a hometown business in her family's honor.

"I want to take my rapper money and start my own assisted living facilities in Houston," she explained, "because I see what it looks like when you got your grandparents take care of your great-grandparents."

Listen to NPR Music's entire conversation with Megan Thee Stallion with the audio link at the top of the page.