Accessibility links
Steph Cha On 'Your House Will Pay,' A Book Where Racial Tensions Reignite Steph Cha's new novel takes place in the present day, but she connects her story of Korean American and black communities in LA to the riots and injustices of nearly three decades ago. 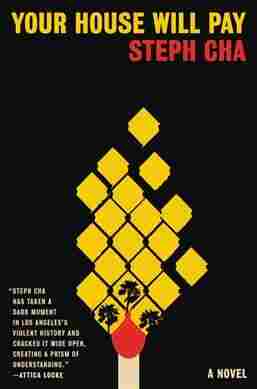 Your House Will Pay

The past is prologue in Steph Cha's new novel, Your House Will Pay.

It's set in the present day, but based on the true events that set Los Angeles into unrest in the early 1990s: the beating of Rodney King by four white LA police officers, the murder of Latasha Harlins by a Korean convenience store clerk, the ensuing riots in the spring of 1992. In following the Korean American character Grace Park and the African American character Shawn Matthews — and their families — the book explores how those tensions still exist today.

In an interview, Cha — who is Korean American and grew up in the LA region in the 1990s — spoke about the "direct throughlines" from then to now.

On the link between early '90s LA and the present day

You know, I started writing this book in 2014 right after Michael Brown's murder. And the rise of the Black Lives Matter movement kind of happened in the beginning stages of my writing this novel. And I remember seeing news coverage of the rioting in Baltimore after the death of Freddie Grey. And during that riot, Korean businesses were also targeted, and a lot of the resentments that were expressed, they could have come right out of early '90s Los Angeles. And I found that really interesting. ... Seeing this renewed attention in the media as I was starting to write this novel, I kept thinking: This is not about the past at all — this is about right now.

On how the Latasha Harlins story inspired her

The Latasha Harlins murder and the light sentence that Soon Ja Du got off with — she was convicted of voluntary manslaughter, but the judge, in an extraordinary decision that basically overruled the jury, sentenced her to no jail time — it was an enormous miscarriage of justice. And hearing about it and thinking about it, I felt this sense of guilt and shame even though I don't know Soon Ja Du. Just being part of the same community with her, and knowing that she is a Korean woman who lives in Los Angeles, and that there is a high chance that I went to church with someone who went to church with her — there's something about being part of a minority group or a tight-knit ethnic group in America that kind of makes you adopt these group emotions ... And I think this is something that is common to people in minority groups — that you feel anger as a group, or you feel grief, or shame.

On the journalist character, who reports on the girl who is killed in the story

I'm a writer. I write about these topics; I write about difficult things. And I think a lot about what the writer's responsibility is. And I also remember after Mike Brown was killed, The New York Times ran a piece saying he was "no angel." ... It was this horrific piece about this boy who had been murdered. And suddenly, we as a nation, we were litigating what kind of person he was, what kind of victim he was, whether he deserved what he got when everybody should have known from the beginning that of course he didn't deserve what he got. ...

The issue with this journalist is not that he had bad intentions. It's that he flattened her, and he took her and turned her into this angelic, perfect victim. And that's something that I've seen a lot of in discussions of, frankly, dead black children. And it's really disheartening, and yet I understand why it's done — because somehow there is more attention paid to these victims when they were going to go to college or they were good children who obeyed their parents and finished high school. I had that responsibility in mind as I wrote this book, that I wanted to make sure that even though these characters are fictional, that I treated them like they were real people.

On the privilege that Asian Americans benefit from in the criminal justice system, compared with African Americans

This is something that I wanted to address too. You know, this is a book about two groups of color. And I'm Asian American, and I feel solidarity with people of color in this country. But I'm also aware that it's not the same struggle. And I think there's an impulse to consider it the same struggle, or part of the same thing, but the reality is that Asian Americans are treated differently from black Americans. It certainly shows up in the criminal justice system ...

Asians get hit with this image of quietness and meekness and politeness, whereas black people get hit with "you're angry," "you're violent." These stereotypes are — you know, even if they're both groups of stereotypes, one set is much more damaging than the other, and results in different outcomes in the criminal justice system, also in education. You know, in all these different arenas, Asian Americans are able to code white, and black Americans just are not. And Asian Americans have this in-between status where sometimes we code as people of color. It kind of depends on who's telling the story and what the story is.

Los Angeles, this was supposed to be it. The end of the frontier, land of sunshine, promised land. Last stop for the immigrant, the refugee, the fugitive, the pioneer. It was Shawn's home, where his mother and sister had lived and died. But he had left, and so had most of the people he knew. Chased out, priced out, native children living in exile. And he saw the fear and rancor here, in the ones who'd stayed. This city of good feeling, of tolerance and progress and loving thy neighbor, was also a city that shunned and starved and killed its own. No wonder, was it, that it huffed and heaved, ready to blow. Because the city was human, and humans could only take so much.

I feel that way about the entire country — let's get that straight. But I think LA is a place that people do think of as this progressive paradise. But it is a place that has a lot of problems and a lot of divisions, and ones that are age-old that are not being dealt with. And I think it's kind of a microcosm for the rest of the country. You know, it's a very diverse place where people are constantly clashing. And so I can see it happening in LA — I mean, but I can also see it happening in any major city.

Justine Kenin and Jolie Myers produced and edited this interview for broadcast. Patrick Jarenwattananon adapted it for the Web.