Accessibility links
'The Hard Times: The First 40 Years' Is A New Book From The Satire Website NPR's Rachel Martin talks to Matt Saincome and Bill Conway, co-founders of the satirical punk rock news website The Hard Times, about their new book. 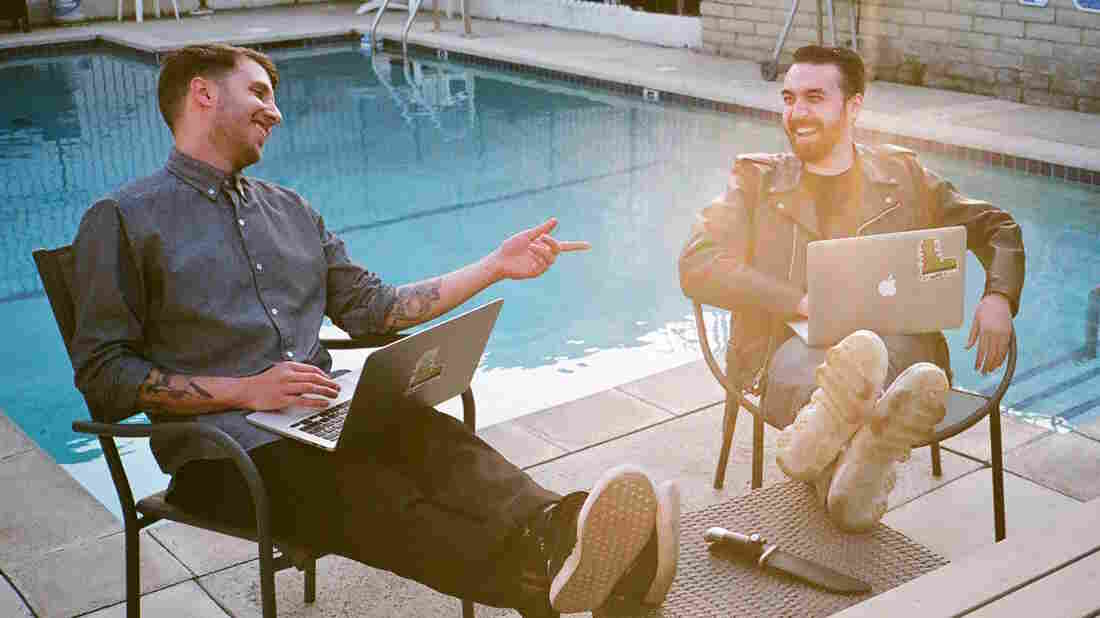 Bill Conway (left) and Matt Saincome (right) collected their favorite articles from their satirical website The Hard Times for a new book. Stefan Vleming/Courtesy of the authors hide caption 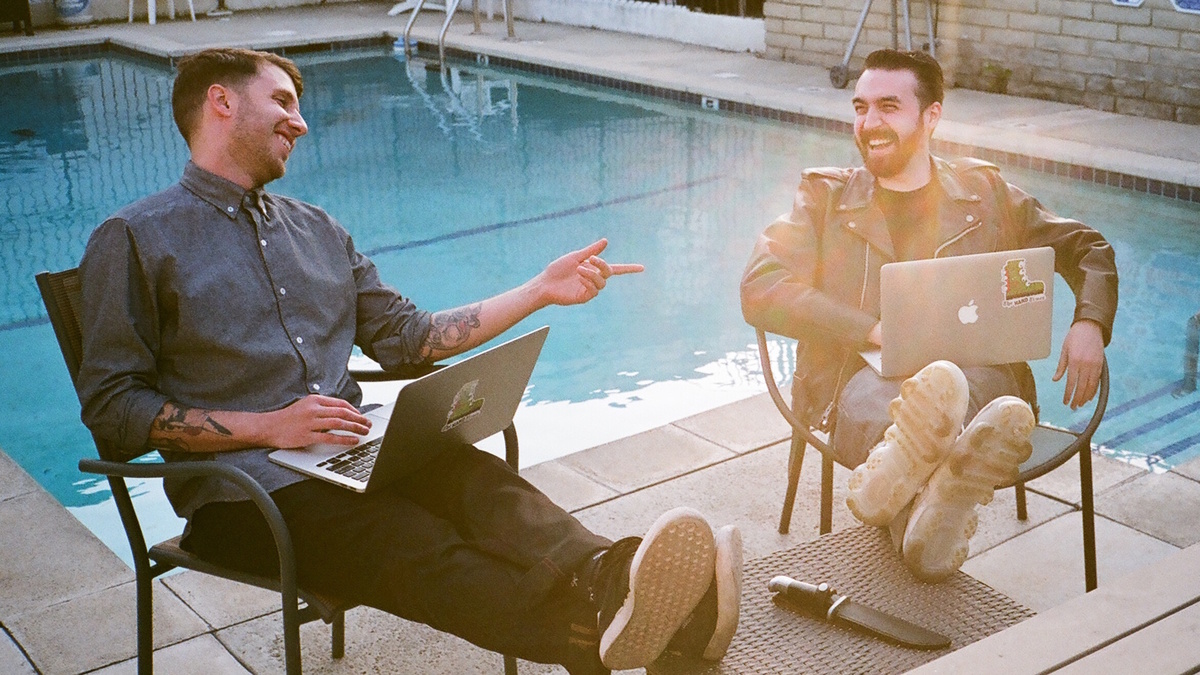 Bill Conway (left) and Matt Saincome (right) collected their favorite articles from their satirical website The Hard Times for a new book.

Stefan Vleming/Courtesy of the authors

Matt Saincome and Bill Conway are co-founders of The Hard Times, a satirical punk rock website established in 2014. Together with colleague Krissy Howard, they published a book of their favorite articles and some new material called The Hard Times: The First 40 Years.

Punk rock can mean different things to different people, but there are some ideas that are central to the genre. Punk is anti-establishment. Punk is emotional. It is raw and for the most part, it's pretty serious, which makes it ripe for a good comedic grilling.

"There's a lot that is funny about punk when you take a step back and actually look at how ridiculous it can be sometimes, because people are so protective of it in a weird way," Conway says.

NPR's Rachel Martin spoke to Bill Conway and Matt Saincome about the punk community's initial reaction to the website and issues of masculinity in the scene. Conway also read an excerpt from the book. Listen in the audio player above and check out an edited transcript of their conversation below. 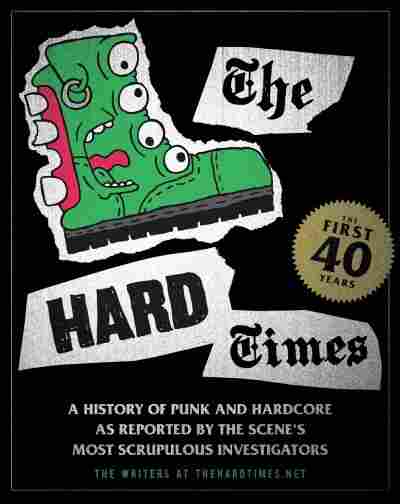 Rachel Martin: Clearly both of you have a sense of humor; you have a facility with satire, especially when it comes to punk. Matt, before you did the whole website, you were a satirical punk singer. What does that even mean?

Matt Saincome: There's a whole element of punk and hardcore about extreme masculinity and being macho, being the toughest guy in the room, you know, you take your shirt off. And then there's also specific phrases that they all say.

Bill Conway: There's something always about how, "We're all the misfits and the rejects." That, "We're all here" and "This one's for them." Every song is for the kids in the back, and all that.

Saincome: There's this thing in the punk scene where we're all supposed to be equals, the bands and the fans, and we just kind of flipped that on its head and pretended like we were rock stars. Like one time I demanded the crowd mosh and stage dive before we even played, otherwise we wouldn't play.

I understand your friends were a bit skeptical about this idea of creating a website dedicated to poking fun about punk.

Saincome: When I was growing up in the punk scene, I had a zine, which is just a printed out little bootleg magazine. I sat down and I wrote four or five different Hard Times stories — this is in college. I showed them to some of my friends and they blank, stone-faced read them: This isn't funny, you're going to get beat up, why would you do this?

They convinced me [not to] do it for several years until I met Bill. Bill really believed in the idea and it took off from there.

Wait, why were you going to get beat up?

Saincome: Well the punk scene is naturally kind of a violent place.

But it was because you were making fun of people? And your friends were worried you could come away with some broken bones?

Sometimes when you confront those ideologies with a bit of humor, the reaction is explosive.

Saincome: Well, that was my expectation, too! I was surprised that we didn't get beat up.

Conway: We've only had one or two threats of physical violence, which is much lower than I had thought when we first started. Matt and I don't have any bylines on the site. Everything we write is just under "The Hard Times Staff," under the impression we were going to get sucker punched at a show.

So that was the bar — as long as I don't get sucker punched, and so far, so good.

Saincome: There's a lot of radical beliefs in the punk scene, some of which Bill and I have — we're kind of weirdos, we don't smoke, we don't drink. Sometimes when you confront those ideologies with a bit of humor, the reaction is explosive.

I'm going to draw attention to one that resonated with me, personally. This is "Man magically transforms into music historian while talking to women," and I'm going to have you read the first three paragraphs for me.

Conway: Seattle — Local man Brian Reynolds embarrassed himself again thanks to his unique skill of transforming into a historian of any music genre while in the presence of a woman, friends and associates completely fed up with his crap confirmed.

"It really comes out of nowhere — you never expect it," said Erik Felix, a witness on more than a few occasions. "Brian's usually pretty mild-mannered, but he will suddenly change into this giant a**hole of a music encyclopedia whenever he meets someone he's attracted to."

Saincome: I'm really glad you related to some of the articles in the book. You don't have to be the kind of person who goes to DIY basement shows, it's just the satirical perspective from people who [do] go to DIY basement shows. But they also exist in the real world and have takes on all sorts of other stuff.

Invisibilia: Punks Policing Their Own

There is, as you describe it, "a real preciousness" in the culture. A culture where, you said at the beginning of the conversation, that's always like, "This one's for the kids in the back, this one's for all the misfits who always felt excluded." It's supposed to be a safe space for everybody that sort of becomes intolerant.

Saincome: Rachel, you've figured it out! This is the whole premise of the website.

Can people in the punk world take a joke?

Saincome: There is a sensitivity level in the punk scene which I think is elevated. But at the same time, I think The Hard Times comes from a place where it really is a celebration of punk and hardcore, too. It's not that mean-spirited and we've actually grown to the point where 99% of the time when people get covered in our publication, they are ecstatic. Even really large musicians who we cover will sometimes retweet it and say "We finally made it, we're in The Hard Times."