Accessibility links
'Mr. Robot' Creator Sam Esmail Says Anxiety And Hacking Inspired The Show In college, Sam Esmail shied away from parties and instead took refuge in the the computer lab, where he experimented with hacking. He later built on those experiences to create his hit show. 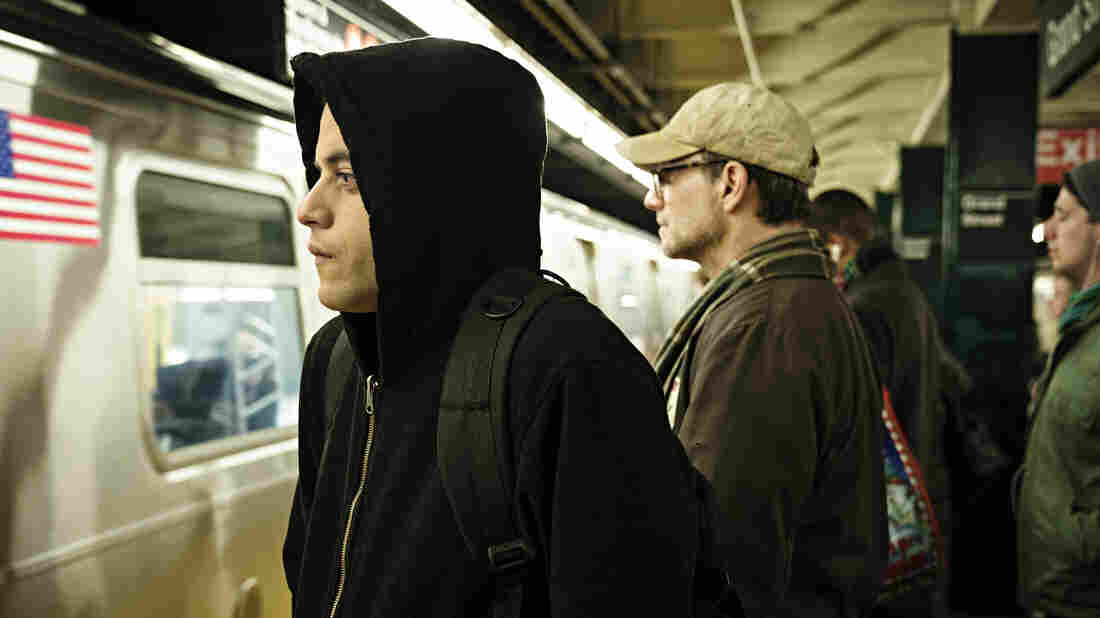 Mr. Robot creator Sam Esmail says portraying Elliot (Rami Malek) in a hooded sweatshirt was a deliberate choice: "That hoodie made us closer to who Elliot was." Elizabeth Fisher/USA Network hide caption 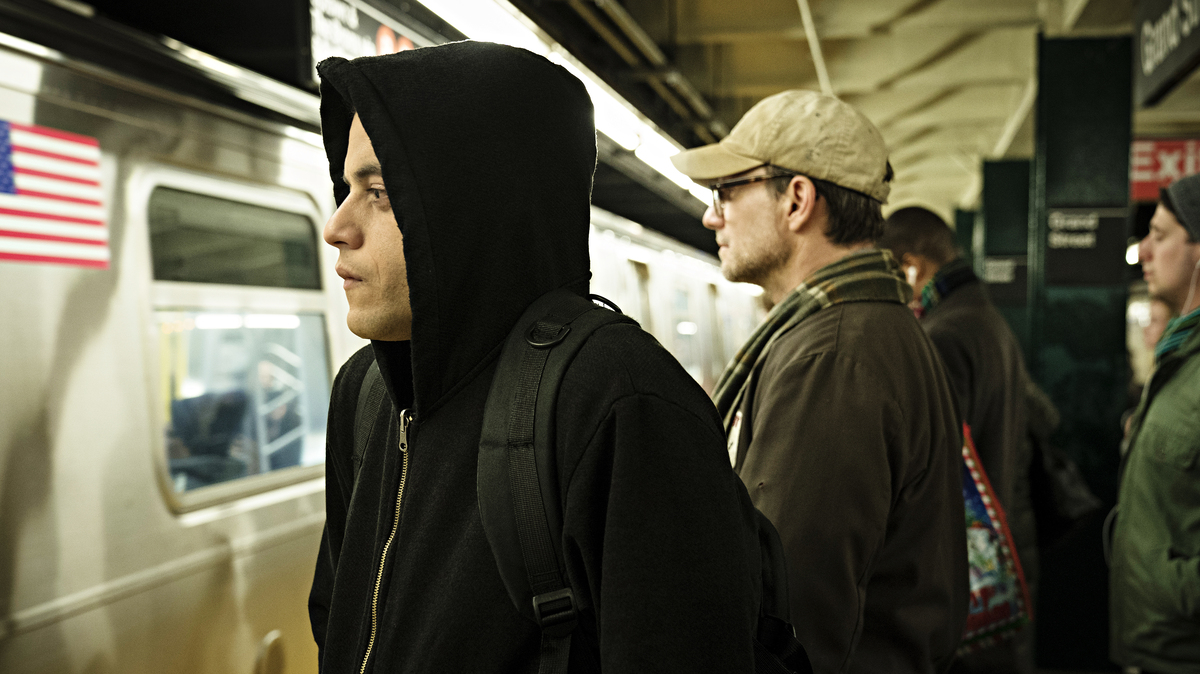 Mr. Robot creator Sam Esmail says portraying Elliot (Rami Malek) in a hooded sweatshirt was a deliberate choice: "That hoodie made us closer to who Elliot was."

Sam Esmail, the creator, lead writer and director of the TV series Mr. Robot, has always identified with computer programming and hacker culture — in part because of his experiences with social anxiety.

In college, he shied away from parties and instead took refuge in the computer lab. It felt safer to talk to people online than in person, Esmail says. But working in the computer lab sometimes created problems; at one point, he was put on academic probation for hacking.

"Where you're just behind a computer and essentially replacing a social life with that," he says, "it tends to be a slippery slope to then learning ... how to get into people's email accounts or people's social media accounts."

Now in its fourth and final season on the USA Network, Mr. Robot stars Rami Malek as Elliot, a hacker who infiltrates giant corporate computer networks — while also trying to withdraw from the world.

"I wanted to tell some sort of story that authentically represented that world [of hacking]," Esmail says. "A lot of the movies that came out of Hollywood, especially in the late '90s and even then in the 2000s, were very corny and had nothing to do with realistically what hacker subculture was all about."

Esmail adds: "It's not about what firewall or security protocols are on your phone. It's about: How do you exploit people, and, using their vulnerabilities, figure out a way to break into a system?"

On how the financial collapse of 2008 and the Arab Spring also inspired him to create Mr. Robot

Those two things helped me develop the character of Elliot and why he wanted to be a hacker, why he wants to go into this culture, why he had this sort of grandiose vision of starting a revolution and changing the world; because I was so moved, I was so horrified by the financial collapse and how the top 1% were doing these really criminal activities on a large scale and getting away with it. And then seeing how technology helped people in the Arab countries rise up and have a voice and start a revolution.

I wanted to really represent his loneliness in a very authentic way, and because his isolationism is part of what drives him to hack people. ... He's so alone, but yet he's able to access sort of the most intimate details of everyone around him. To stay true to that kind of person, that extreme that Elliot goes to, dissociative identity disorder fit what Elliot was experiencing, because he wasn't able to essentially connect to people and the contrast to that is he just dissociates from them. ... D.I.D. was just something that really fit, I think, what Elliot's journey was ultimately going to be about across the whole series, which is about this young man who cannot, through this deep fear and this deep isolationism, can't find a way to connect with other people.

When we were auditioning people, and we must have seen I would say close to 100 guys if not more ... we had great actors coming in. ... They would do these beautiful interpretations of the scene, but the character just came off very cold, very obnoxious, and I was almost going to tell USA [Network], "Let's not do this. This doesn't make sense," or, "I got to rewrite this. I think this guy is annoying and I don't think anybody is going to want to spend every week with this person."

Then Rami came in, and when he did the scene, he added this vulnerability ... where it doesn't come off [as] commanding or egotistical, even though the words are that — he added this subtext that it was coming from a place of real pain and real vulnerability and real wanting to connect. And that was the spark that really made that character come to life.

On why Elliot wears a hoodie all the time

This is something directly lifted from my life. I wore a hoodie every day. And for me, that was easy to visualize. I'd visualized it just with myself walking down the street, knowing where to put the camera, and I loved that you could see that he was hiding. Even though I couldn't see his face at all times ... we could see a piece of him. ... It's not about capturing someone's face. It's about capturing that person, that character, and always trying to tell a story with wherever you put the camera on that person. So it's not about getting both eyes and having it symmetrical. We wanted a frame and [to] always express what Elliot is doing, who he is, and so it was easy. That made it easier, because the limitations of where you can put the camera when Rami was in that hoodie made us closer to who Elliot was.

I remember when I was 5, I think, I was called "sand n*****" so much that I didn't even know that that was a pejorative until I think I said it out loud in front of adults. My parents didn't even know it. ... I got beat up. I remember the first day [of] kindergarten. My older sister Nancy, she was born mentally challenged and so she would get picked on a lot, and therefore I would get sort of residual bullying from that. ... So of course I tried to stand up for her and then I just got beat up by about five kids from the neighborhood. One of them actually ended up being one of my good friends, ironically enough, after that. But yeah, I probably got into more fights than I can remember all through elementary school and middle school.

They didn't care about anything related to American culture. ... They would drop me off at noon at the movie theater and buy one ticket. And then I would stay until 10 p.m. and I would theater-hop, and you sneak into other movies at the multiplex. We'd see four movies and then they'd pick me up at 10 p.m. at night, and I was 8, 9 when I was doing this. ... They wouldn't even come into the movies with their son who's that young, and they would just, rather than spend the money, they would just pay for my ticket and leave me there.

Lauren Krenzel and Joel Wolfram produced and edited this interview for broadcast. Bridget Bentz, Molly Seavy-Nesper and Patrick Jarenwattananon adapted it for the Web.