Accessibility links
'Extreme Red Flag Warning' In California, Where A New Fire Burns Near Reagan Library Firefighters now have Sonoma County's Kincade Fire 30% contained. But high winds are threatening to spread flames in both northern and southern parts of the state. 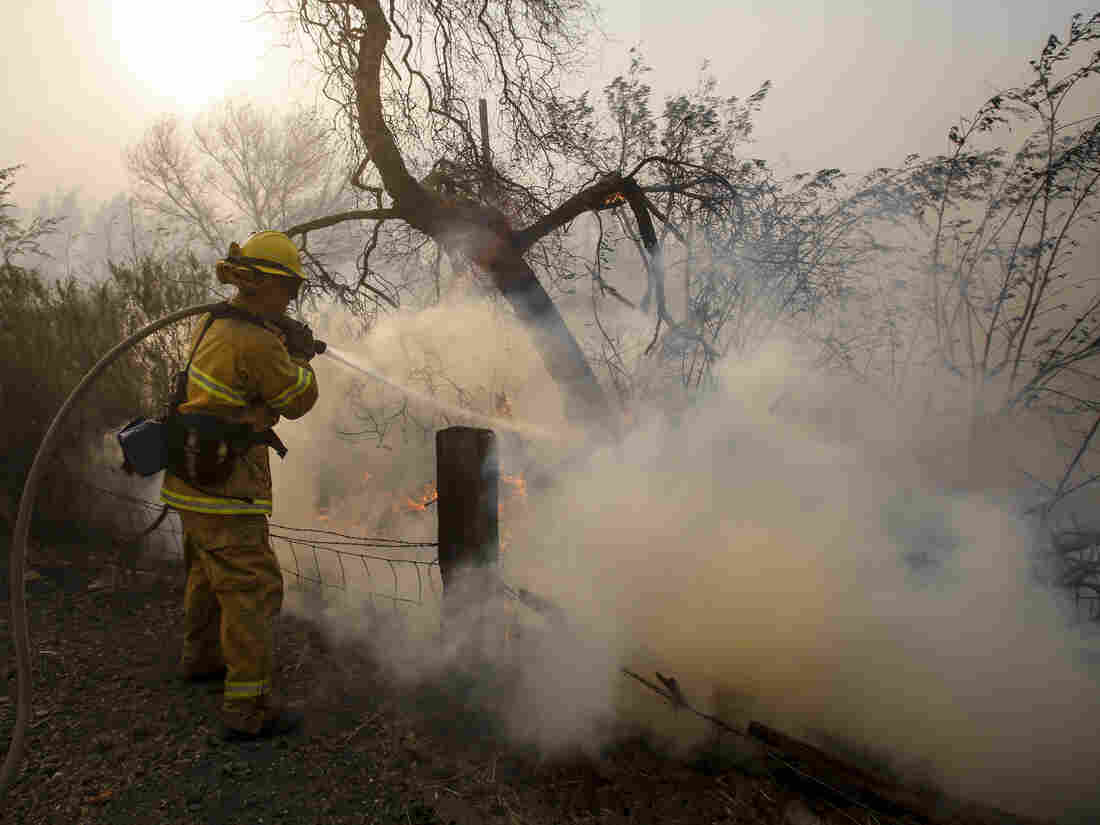 A firefighter battles a wildfire near a ranch in Simi Valley, Calif., on Wednesday. The large new wildfire erupted in wind-whipped Southern California, forcing the evacuation of the Ronald Reagan Presidential Library and nearby homes. Ringo H.W. Chiu/AP hide caption 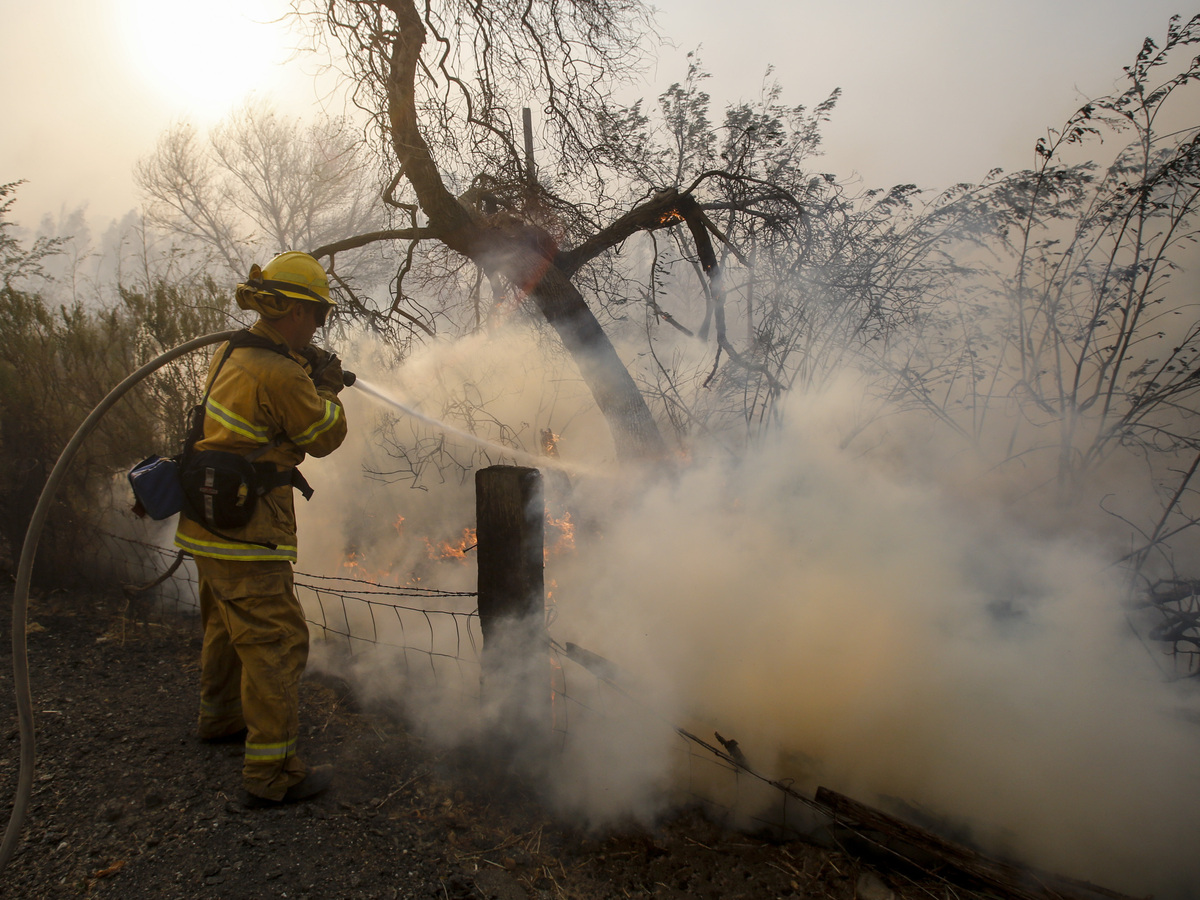 A firefighter battles a wildfire near a ranch in Simi Valley, Calif., on Wednesday. The large new wildfire erupted in wind-whipped Southern California, forcing the evacuation of the Ronald Reagan Presidential Library and nearby homes.

California officials report progress in their battle against wildfires, even as new dangers arise from powerful winds.

"Over the past week, more than 300 blazes have broken out in California," member station KQED reported, "but so far, there have been no fatalities linked to the Northern California fires."

In the southern half of the state, a new brush fire burned 1,300 acres in less than five hours in the Simi Valley area, Cal Fire says. The fire erupted northwest of Los Angeles around 6 a.m. local time Wednesday.

The blaze, known as the Easy Fire, has forced the evacuation of the Ronald Reagan Presidential Library. The library uses goats ahead of fire season each year to eat through brush that would otherwise fuel a wildfire. Firefighters have dropped huge loads of water on the flames to protect the library, The Los Angeles Times reported.

Dangerously high winds threaten to fan the flames further. The National Weather Service issued an "extreme red flag warning" for Los Angeles and Ventura counties from Tuesday night to Thursday evening. Meteorologists predict Santa Ana winds gusting at 50 to 70 miles per hour, with isolated gusts reaching up to 80 mph in the mountains.

The Easy Fire is burning on both sides of a freeway, threatening nearby homes and structures. The California Highway Patrol has closed some roads to aid evacuations, NPR's Doualy Xaykaothao reports from Los Angeles. As of Wednesday evening, the fire was only 5% contained.

In Northern California, authorities have been making strides in containing the largest fire burning in the state. 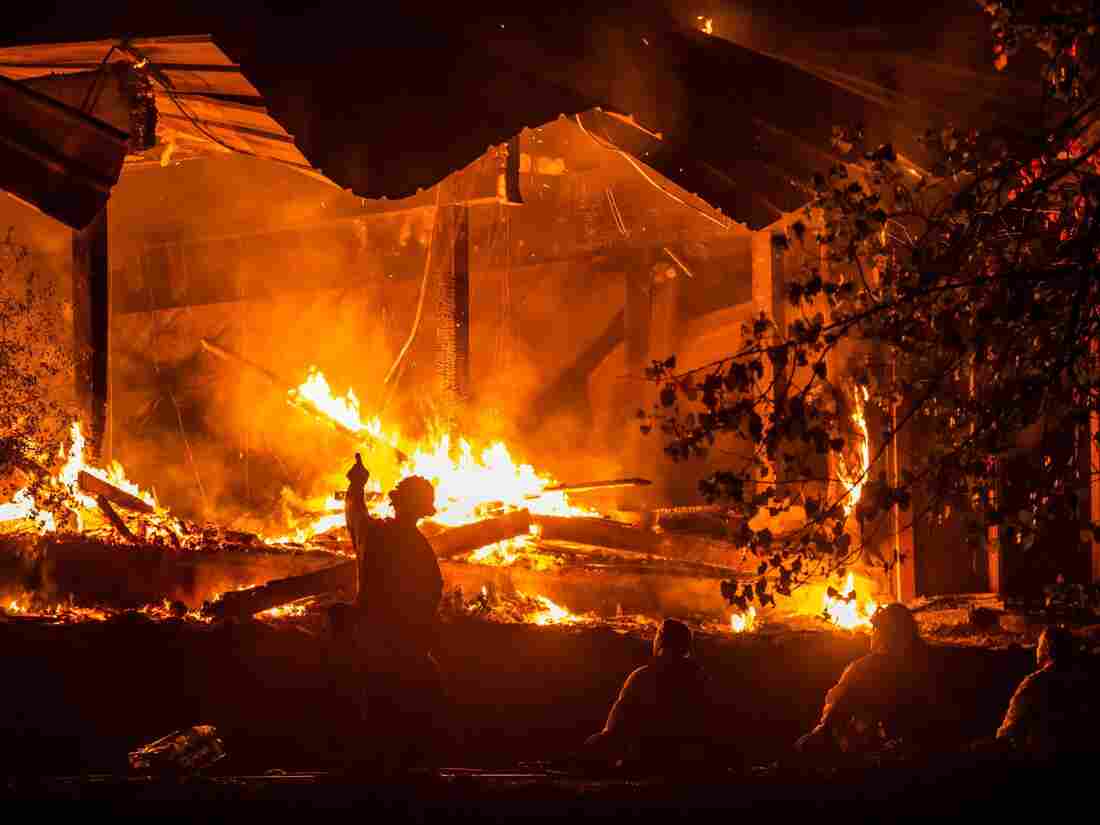 Firefighters look on as a structure burns during the Kincade Fire off Highway 128, east of Healdsburg, Calif., on Tuesday. Philip Pacheco/AFP via Getty Images hide caption 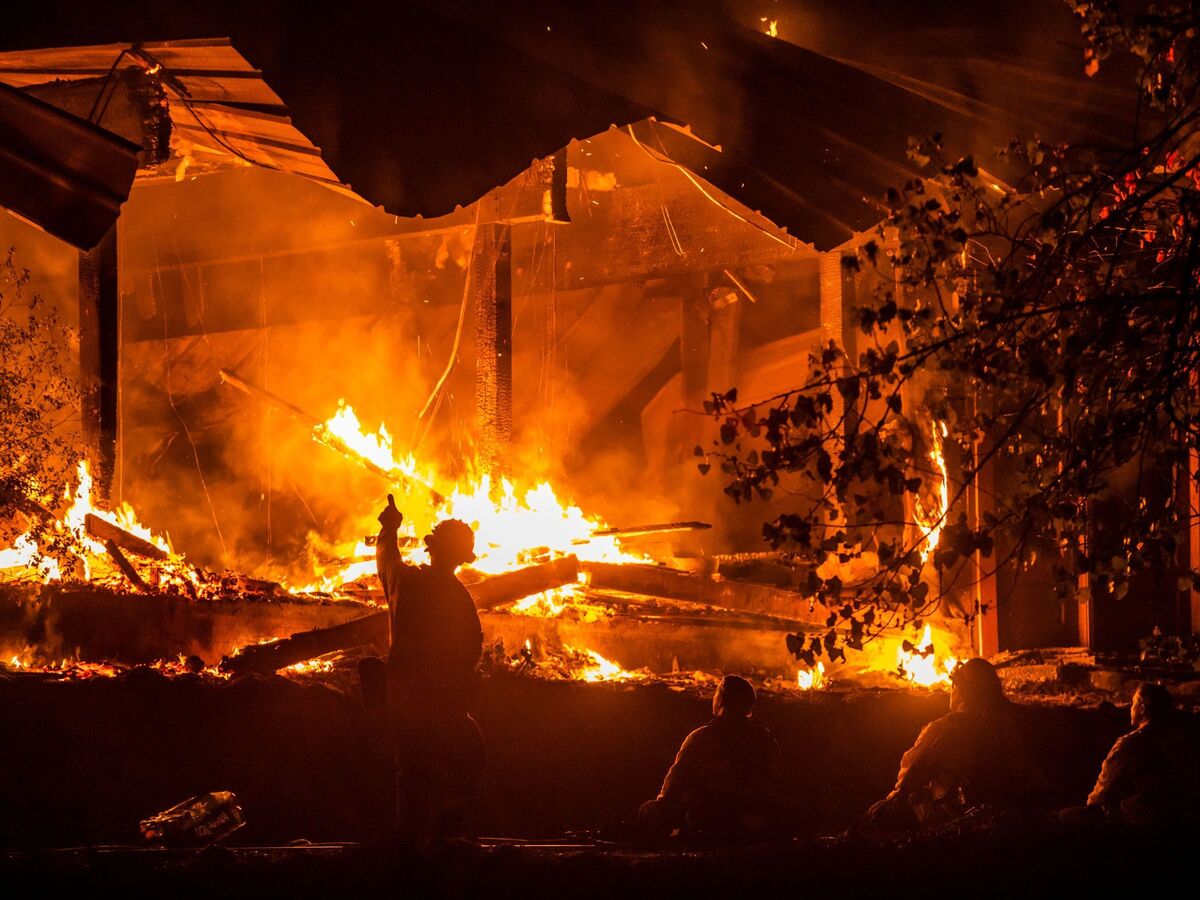 Firefighters look on as a structure burns during the Kincade Fire off Highway 128, east of Healdsburg, Calif., on Tuesday.

The Kincade Fire, which has been tearing through Sonoma County wine country for nearly a week, is now 45% contained. Cal Fire says it has 5,000 firefighters deployed to get the blaze under control.

"The eastern part of the fire was active overnight, but firefighters continued to make forward progress, as a whole," Cal Fire said in an update on Wednesday. "Access to the northern part of the fire remains challenging because of steep terrain and narrow roads."

A red flag warning there continues through the afternoon as firefighters work to reduce threats to structures and build more control lines.

Scorching nearly 77,000 acres, the Kincade Fire has destroyed more than 250 structures and damaged nearly 50 others.

Meanwhile, many Californians continue to deal with rolling blackouts as their bankrupt utility, PG&E, cuts power to prevent its lines and equipment from sparking more fires. The blackouts affected some 1.5 million people in 30 counties on Tuesday, The Associated Press reported. One million of them had lost power over the weekend and were still without it.