Accessibility links
Nationals Beat Astros 6-2 To Win The 2019 World Series The Nats were initially handcuffed by Houston starter Zack Greinke, who gave up only two hits in six innings. Washington scored all six runs in the last three innings. 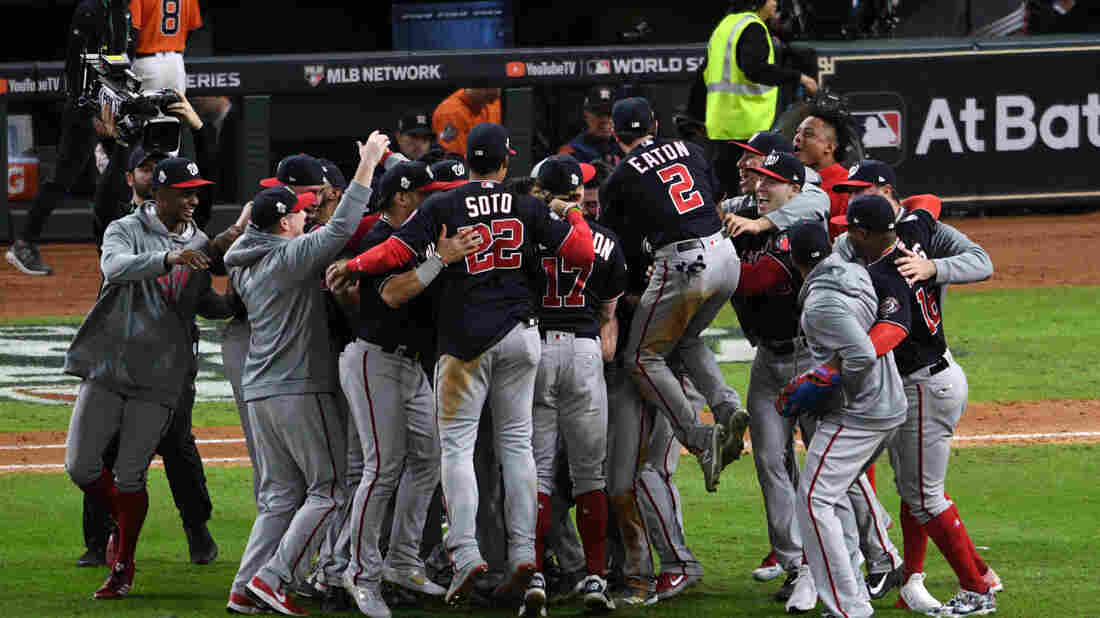 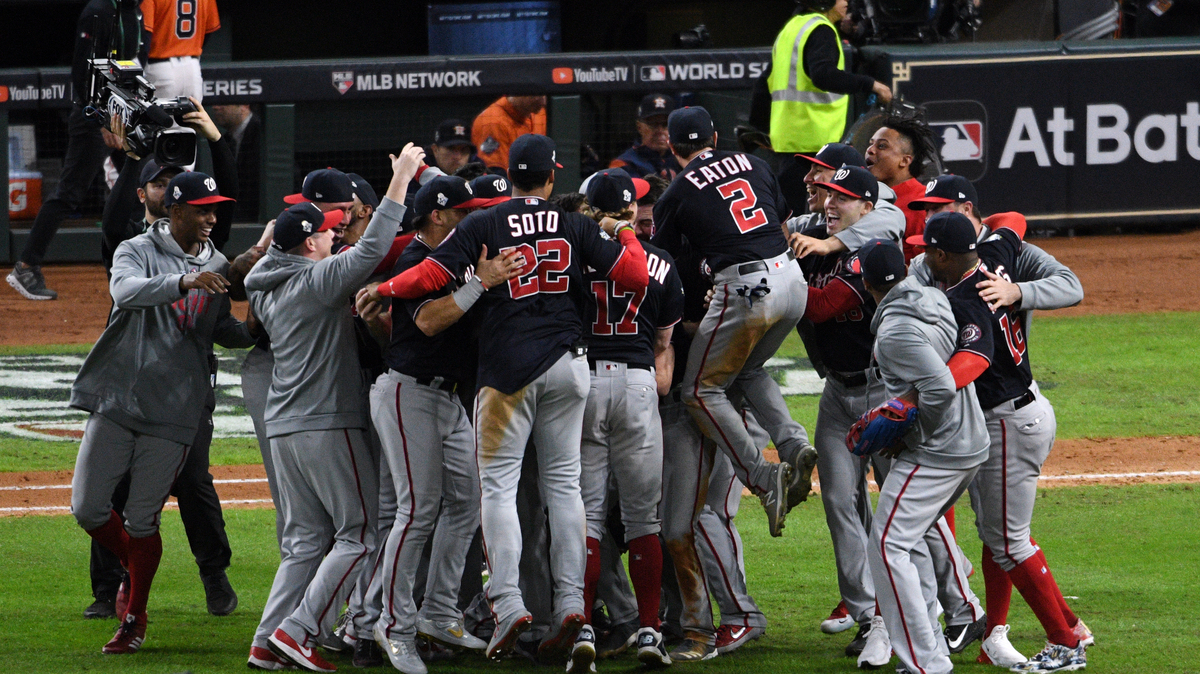 The Washington Nationals celebrate Wednesday after defeating the Houston Astros in Game 7 to win the World Series, at Minute Maid Park in Houston.

The Washington Nationals beat the Houston Astros 6-2 in Game 7 of the World Series in Houston.

It is the Nationals' first championship since the franchise moved to Washington, D.C., in 2005.

The Nationals are also the first team in MLB history to win the World Series by winning four games as the visiting team.

Washington won despite being dominated by Houston starter Zack Greinke for better than six innings. The Nationals scored all of their runs in the last three innings.

The last time a Washington baseball team won the World Series was 1924, when they were called the Senators. 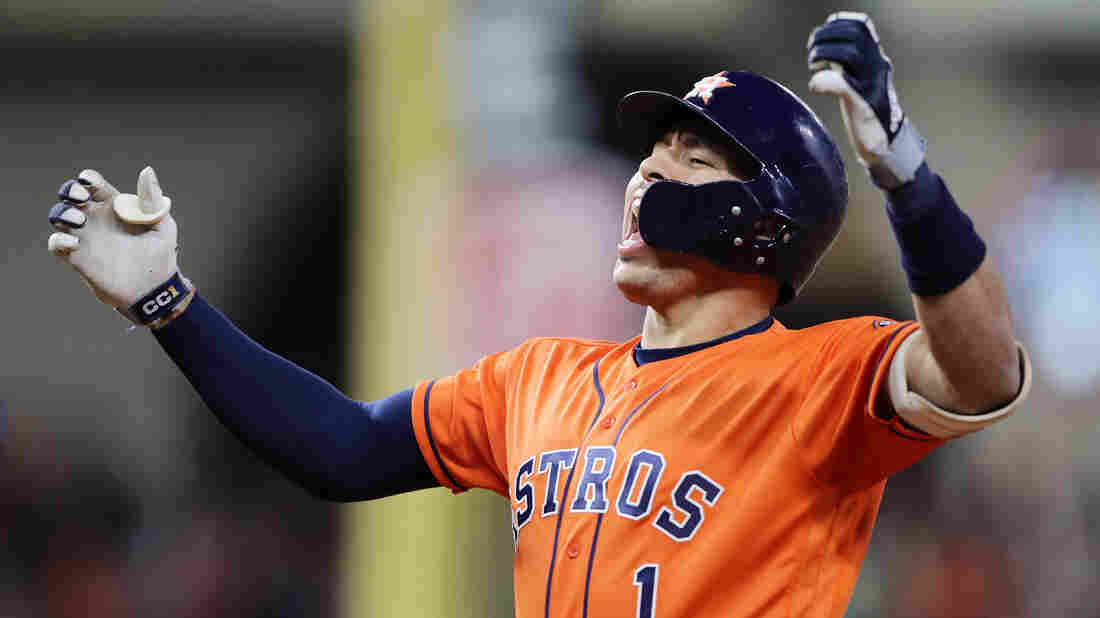 Carlos Correa celebrates after hitting an RBI single for the Houston Astros against the Washington Nationals during the fifth inning of Game 7. Elsa/Getty Images hide caption 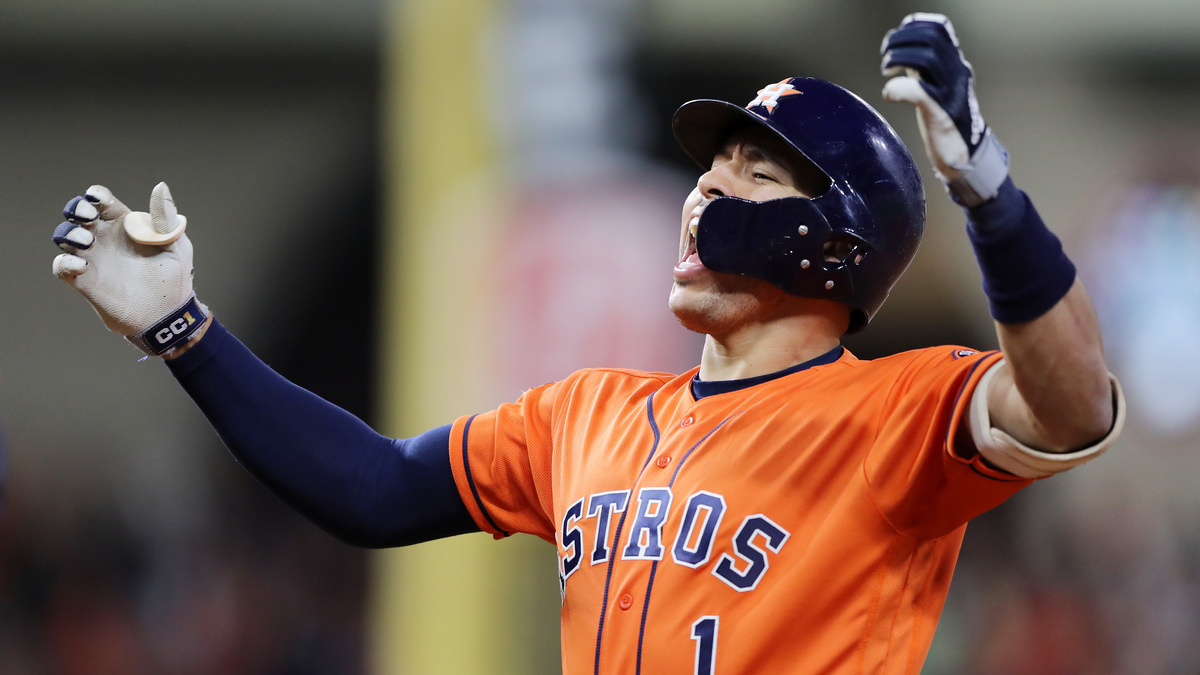 Carlos Correa celebrates after hitting an RBI single for the Houston Astros against the Washington Nationals during the fifth inning of Game 7.

"What a story," said Ryan Zimmerman, according to The Associated Press. Zimmerman was the Nationals' first draft pick in the team's first season in the nation's capital and the last player left from the original squad.

"I hope D.C.'s ready for us to come home!" Zimmerman said.

The game began as a duel between Greinke and Washington's Max Scherzer. Neither lasted the game.

The Astros struck first on a solo home run by first baseman Yuli Gurriel off Scherzer to start the bottom of the second inning. The Washington ace was pitching after being scratched from Game 5 because of an irritated nerve near his neck that caused spasms, for which he needed a cortisone injection.

Scherzer looked like he might be in trouble after back-to-back singles by designated hitter Yordan Alvarez and shortstop Carlos Correa with no outs. But Scherzer worked out of that jam.

The Astros kept the pressure on Scherzer with two runners on again in both the third and fourth innings, but they didn't score.

Houston's Greinke, meanwhile, cruised through the first six innings allowing only one hit.

The Astros made it 2-0 on an RBI single by Correa in the bottom of the fifth inning.

The Nationals finally showed signs of life in the top of the seventh inning when third baseman Anthony Rendon made it 2-1 on a solo homer to left field — just the second hit Greinke had given up. When Greinke walked left fielder Juan Soto, his night was over.

The next batter, designated hitter Howie Kendrick, smacked a two-run home run off relief pitcher Will Harris that hit the right field foul pole, giving the Nationals a 3-2 lead.

A single with one out by second baseman Asdrúbal Cabrera chased Harris, and it appeared that Washington might break the game open. But reliever Roberto Osuna stopped the Nationals from adding to their then-meager lead.

The Nationals added another run in the eighth inning when Soto hit an RBI single that scored right fielder Adam Eaton, who had walked and stolen second base. Washington led 4-2.

Come the top of the ninth, the Nationals loaded the bases with one out before Eaton hit a two-run single, extending Washington's lead to 6-2.

Reliever Daniel Hudson retired the Astros in the bottom of the ninth without incident.

"It's every reliever's nightmare that I get a chance to live," Harris said, his eyes red-rimmed, according to the AP.

Houston left 10 runners on base; the Nationals left seven.

Washington's ace pitcher Stephen Strasburg, who went undefeated in October, was named Most Valuable Player of the Series.