Accessibility links
Review: In 'Terminator: Dark Fate,' The Franchise Reboots Linda Hamilton is back — and funny! — as Sarah Connor in a lean, propulsive and women-centered sequel that seeks to wave away the recent sequels in the Terminator franchise.

In 'Terminator: Dark Fate,' A Faltering Franchise Gets A Hard Reset

In 'Terminator: Dark Fate,' A Faltering Franchise Gets A Hard Reset 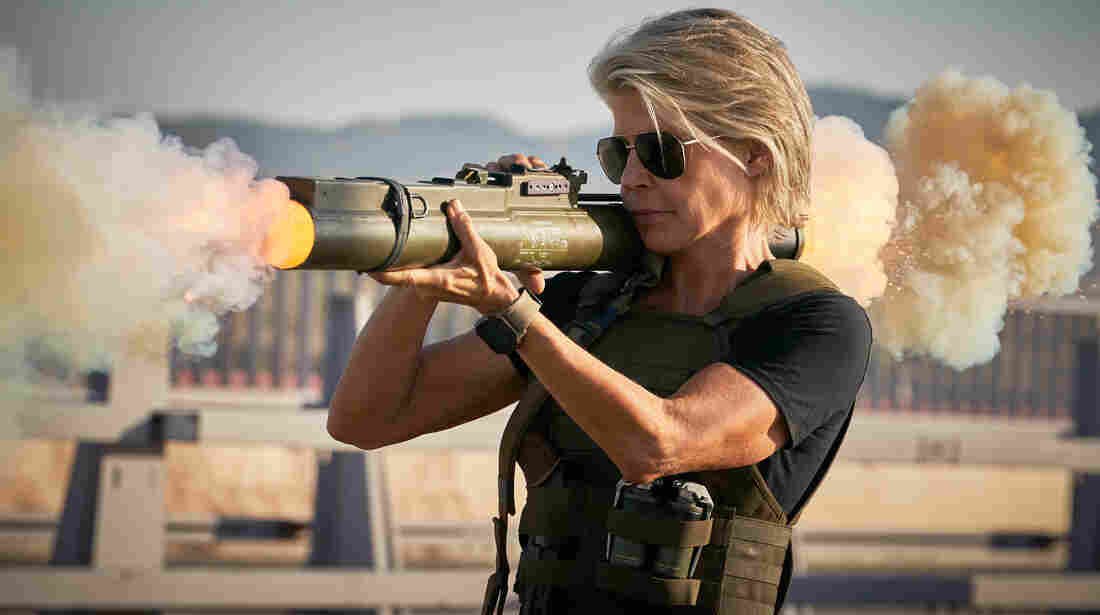 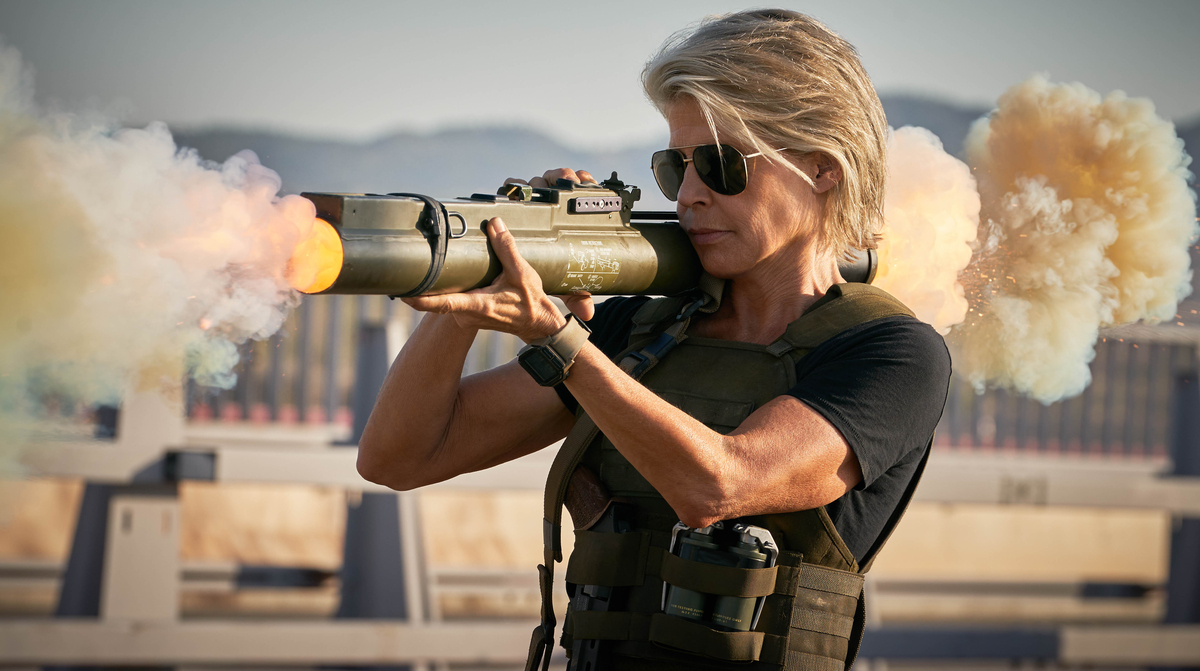 James Cameron wrote and directed The Terminator for love. He made Terminator 2: Judgment Day for money. On his prior film, the Close-Encounters-of-the-Wet-Kind adventure The Abyss, the polymath who'd broken into the biz working for no-budget auteur Roger Corman had gone way over budget in his quest to push the envelope, as would become his habit. The Abyss was (and remains) the sole title on his directing resume that failed to turn a fat profit. After it sank, the presumptive King of the World needed a hit.

T2 delivered on all fronts: It was the top grosser of 1991, the biggest hit of Arnold Schwarzenegger's career, and an artistic and technological triumph anchored by a commanding, nose-breaking, heart-rending career-best performance from ... Linda Hamilton, as institutionalized waitress-cum-warrior Sarah Connor.

In the course-correcting new sequel Terminator: Dark Fate — No. 6 in a series asking us to receive it as merely No. 3, waving away the unloved Hamiltonless and Cameronless chapters — Hamilton is back, and she's magnificent. More specifically, she's a magnificent wreck, giving us a Sarah Connor hardened but hollowed by the sacrifices of a war on machinekind that, thanks to her temporal script-doctoring in T2, has never come to pass.

Or rather, not on the schedule that her time-displaced babydaddy Kyle Reese lived through. It seems that no matter how many butterflies you step on or don't, some rogue cyberdefense something-or-other is going to get around to cleansing the Earth of its human infestation eventually, whether the cranky A.I. is called SkyNet or Genisys or LEGION or Tronc.

And so here come another pair of gladiators from the briefly-glimpsed future hellscape: Gabriel Luna as the shape-shifting, cell-dividing Rev 9 (named for the song on The White Album, maybe?) and Mackenzie Davis as Grace, a human bodyguard tricked out with extremely high-maintenance cybernetic upgrades. Their target/protectee is Natalia Reyes as Dani Ramos, a Mexico City factory worker destined for a grander role in human history.

Sounds familiar, right? As in so many other attenuated franchises, the Terminator flicks that have tried hardest to break the template (I see you, Terminator: Salvation!) have tended to be the least successful. The good news is that in a series that has never lacked for resourceful women, Dark Fate is the most distaff dispatch yet, with the Hamilton/Davis/Reyes power trio's desperate flight north to Laredo, Texas comprising the movie's bullet-paced first half. This section culminates in a massive jailbreak from a U.S. Customs and Border Patrol detention facility — which, along with the upgraded prominence of women and persons of color in roles both large and small, goes a long way towards restoring the zeitgeist-channeling superpower that left this series when Cameron did.

Cameron is back, too, albeit only as a producer and part of the writing committee. The result is a mostly successful stab at making the The Force Awakens or the Creed of the Terminatorverse, wherein the old-timers deliver rich and elegiac performances as they buttress a younger, more diverse cast of new characters. Reyes is good and Davis is exceptional. She had a small but memorable part as a Replicant sex worker in the terrific longtail sequel Blade Runner 2049; her promotion here to wise-cracking super-soldier is well deserved.

For all that, the film's richest pleasures still come from the geriatrics: Hamilton is as tough and haunted as she was T2, but now she's also funny. And with the 72-year-old Schwarzenegger humbled into taking a second-hour supporting part — humbled by age, by public scandal (there's a subplot in Dark Fate that parallels a much-publicized episode from his real life to a fascinating degree), and by the fact that his attempts at a post-gubernatorial comeback have fizzled — everyone's contribution to Dark Fate feels proportional. While every critic who has ever written about these movies has pointed out that the Austrian Oak is at his most charismatic and relatable when he's playing a robot designed to pass, briefly, as human, they're not wrong.

The director is Tim Miller, a veteran visual effects guru whose only previous feature directing credit was the pottymouthed bloodbath Deadpool. What's surprising is that he's more adept at modulating Dark Fate's blend of tech-panic pathos and character-based comedy (real comedy, not the smirking Deadpool strain) than he is at the chases and fights. A climactic sequence involving an airplane chase and an exploding dam shows all the signs of having been created via mouse-clicks; it takes place at night, it's murky, there's a weightless quality to it all. For the attention that T2's then-revolutionary digital trickery got back in the (first) Bush era, it was present in just a few minutes of a 135-minute movie; the overwhelming majority of T2's still-jaw-dropping action sequences were achieved the old-fashioned, extremely dangerous way. (Stunt pilot Chuck Tamburro flew a real helicopter under a real freeway overpass in Long Beach, twice, to cite but one harrowing example.)

Blockbusters long ago ceded that turf to Tom Cruise. As Schwarzenegger said 16 years ago in the series' memory-holed first third entry, Terminator 3: Rise of the Machines, "I'm an obsolete design." The women of Dark Fate have a largely, if not completely, satisfying retort: Speak for yourself, old man. The future is not set, but it's female.