Accessibility links
Vampire Bats Form Bloody Bonds Of 'Friendship' Common vampire bats might drink the blood of their prey, but it turns out that these fearsome beasts can be warm and fuzzy when it comes to their fellow bats. 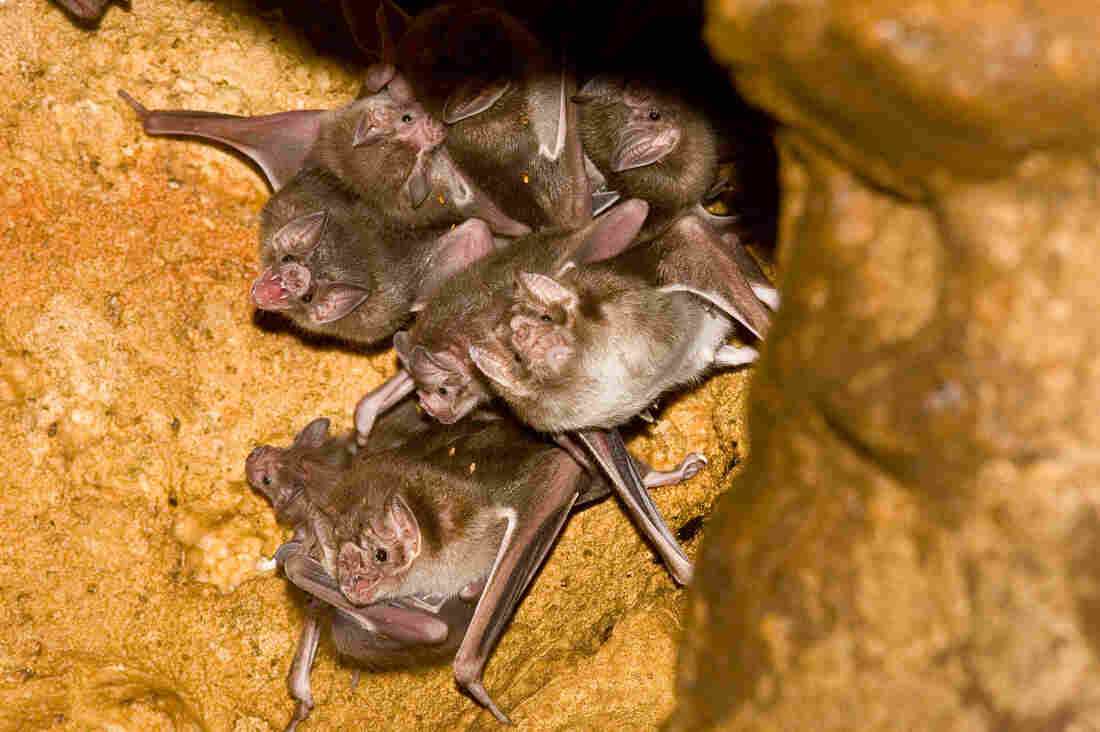 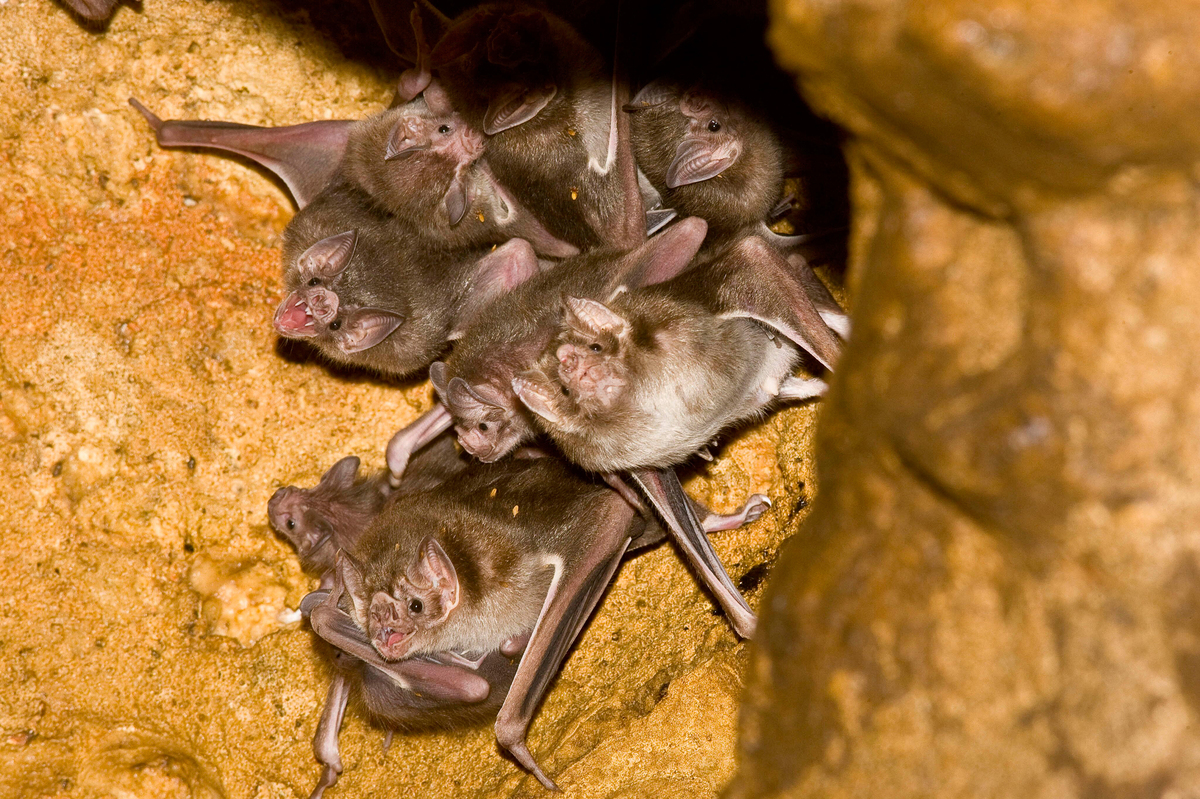 Common vampire bats (Desmodus rotundus), such as this group day-roosting in a cave in Mexico, can form cooperative, friendship-like social relationships.

Vampire bats might have a nasty reputation because of the way they ruthlessly drink their victims' blood, but these bloodthirsty beasts can be both generous and loyal when it comes to their fellow bats.

Captive common vampire bats will share their food with hungry bat companions, and forge such a bond that they continue to hang out with these buddies once they're released back to the wild, according to a newly published study in the journal Current Biology.

"Bats are very maligned, and vampire bats are the most maligned of the bats," says Gerald Carter of The Ohio State University, who is also a research associate at the Smithsonian Tropical Research Institute in Panama. "What I study about them often makes people think about them in a more positive light."

Common vampire bats don't actually suck the blood of their victims, which are usually livestock like horses or cows. Instead, the bats make little cuts with their razor-sharp incisors and lap at the bleeding wounds.

Bats need to lap up about a tablespoon of blood every night, Carter says. If they miss two nights, these small bats get very weak, and missing three nights might mean death.

A desperate vampire bat, however, can find help in its home roost, where neighbors who did manage to drink blood are often willing to share food by regurgitating some of their last blood meal.

"The females will do this for their offspring, but they also do it for adults, including unrelated adults," Carter says. "What's particularly interesting about this species is these non-kin food donations."

Carter has been studying this in captive bats for years. "We don't need to train them to cooperate with each other," he says. "We can just take a bat, deprive it of food for a while, put it back. And then see who is willing to share food with it. And we can just do this repeatedly over time."

This research has shown that bats can develop social bonds with certain individual bats based on reciprocal food sharing.

"We could see that during the time the bats are in captivity that some of their relationships are getting stronger," Carter says. "Almost certainly, there were some bats that were forming new relationships in captivity."

He and his colleagues wondered if these social bonds were real or just something that emerged in the artificial environment of the lab because these bats were forced to hang together.

They decided to do an experiment using 23 female bats that had been captured from a large hollow tree. These bats, and their social connections, had been closely observed for nearly two years in captivity. Over that time, social grooming and food sharing increased within the group. The scientists tagged the bats with special sensors and released them back into the wild, along with a control group of 27 female bats from the wild that were also given sensors.

A team of researchers took common vampire bats (Desmodus rotundus) that had been in captivity and from the wild and tagged them with tiny sensors. The bats' social interactions were then tracked for eight days. Sherri and Brock Fenton hide caption

A team of researchers took common vampire bats (Desmodus rotundus) that had been in captivity and from the wild and tagged them with tiny sensors. The bats' social interactions were then tracked for eight days.

The sensors, lighter than a penny, were stuck onto the bats using surgical glue, says Simon Ripperger, a visiting scientist at the Museum of Natural History in Berlin. "They do not report the exact location," Ripperger says. "They do report who they are with."

Every two seconds, he explains, the sensors searched for the presence and relative proximity of all the other tagged bats. This information got sent to shoebox-sized recording stations located at the roost and at a known foraging site. Researchers tracked the bats, and their social interactions, for eight days. 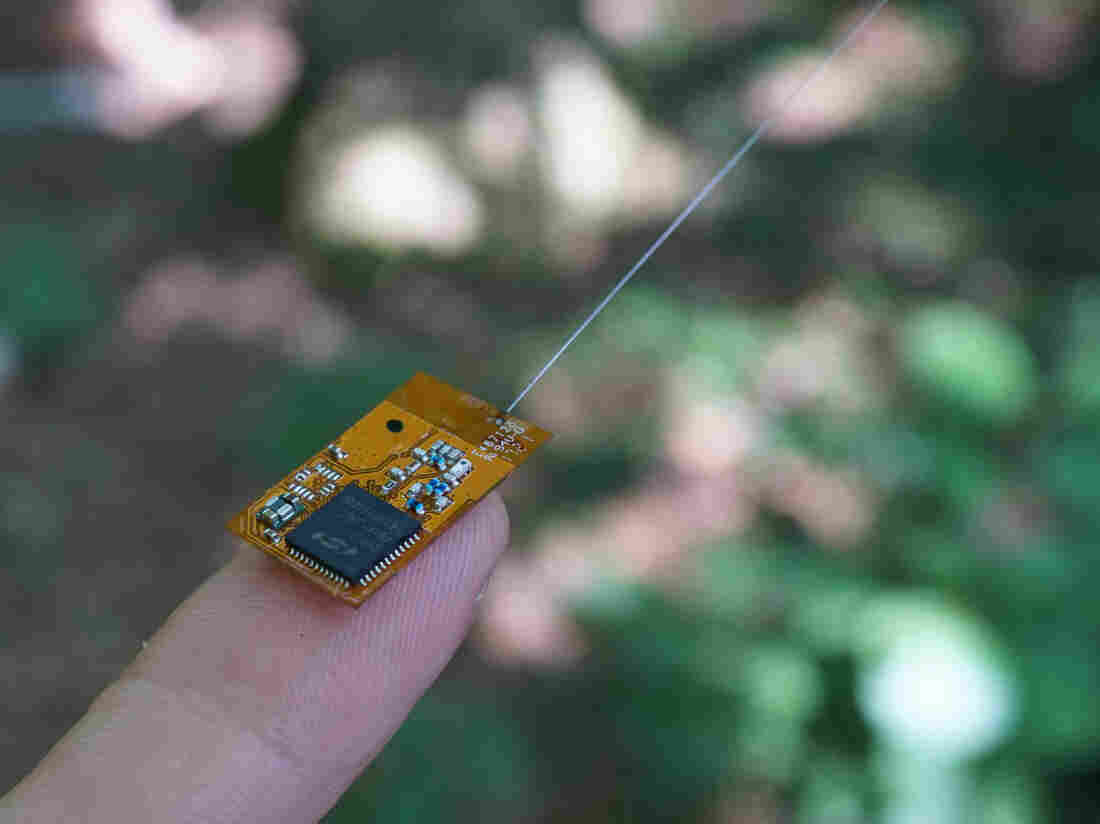 The sensors, which were attached to the bats using surgical glue, could determine how close the tagged bats were to other tagged bats. Simon Ripperger hide caption 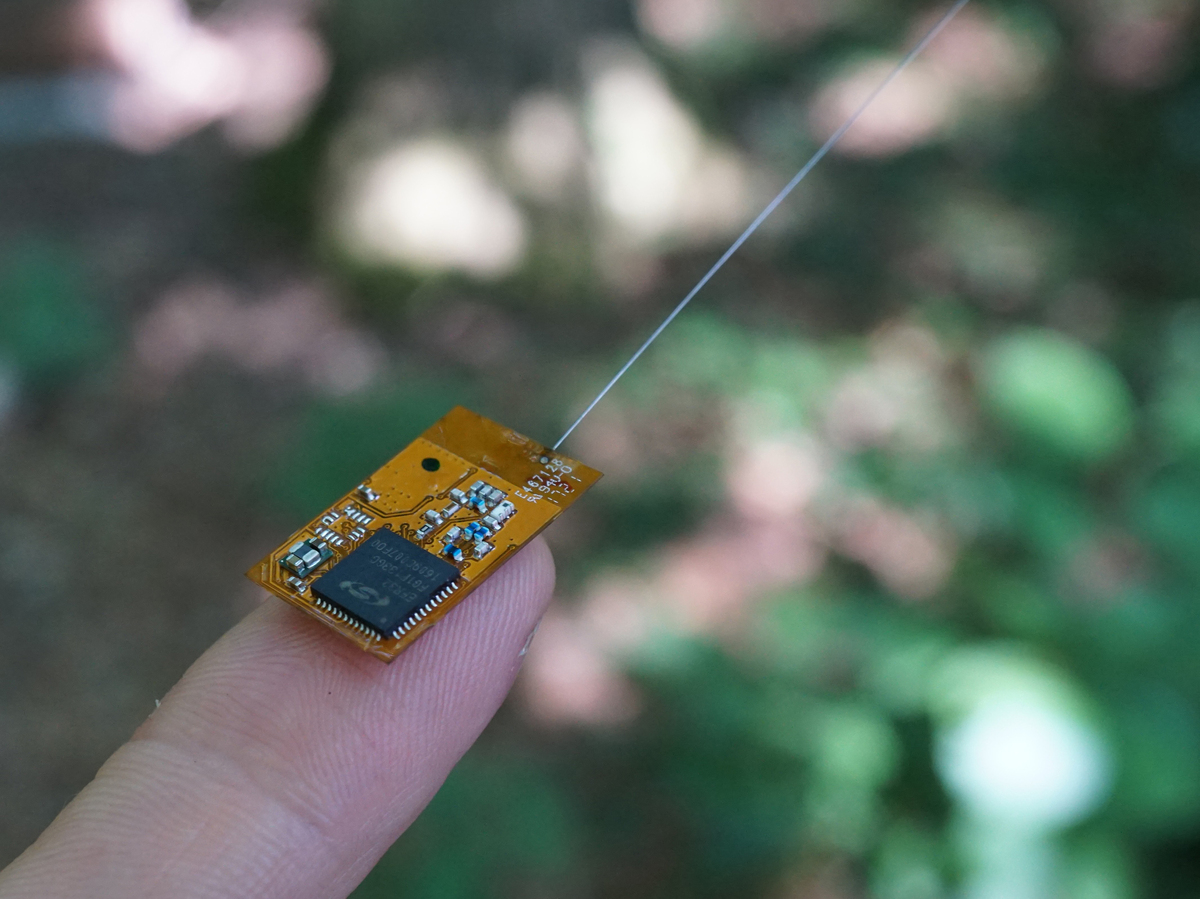 The sensors, which were attached to the bats using surgical glue, could determine how close the tagged bats were to other tagged bats.

What they found is that bats with strong histories of cooperation in the lab continued to spend time together out in the wild. "These relationships that have been forming in captivity, they seem to persist," Ripperger says.

"The relationships are in the animals' minds, and they're not just a byproduct of the environment," says Carter, who adds that other animals such dolphins, elephants and nonhuman primates also seem to have "complex individualized relationships" with others.

Whether to call these relationships "friendships," though, is controversial.

"I'm very reluctant to use that word to describe it, and I don't even like it when it's in in quotes," says Joan Silk of Arizona State University, who has studied social bonds in primates. "The bats can't tell us how they feel, which is a really big problem in trying to figure out what's going on with the animals. So do animals have friends? I think the answer is, I don't know."

"I think animals probably do integrate many experiences over time and build up a kind of 'trust' with different individuals," Carter adds.

His research team has been expanding its tracking studies using the special sensors, also putting them on cows to see whether the tagged bats share the bloody wounds they make on these animals with other bats.

"This is a whole aspect of the behavior of vampire bats that people have just sort of looked at anecdotally," Carter says. "That's pretty exciting for us right now."