Accessibility links
House Resolution Vote Means Impeachment Inquiry Moves Into Open Phase The House passed a resolution setting the rules for public hearings. It also sets the procedures for the president and his counsel for judiciary hearings on articles of impeachment. Rep. Adam Schiff (center) chairs the House Intelligence Committee, which would conduct any open hearings under the House impeachment inquiry, according to procedures specified in a resolution formalizing the process. Patrick Semansky/AP hide caption 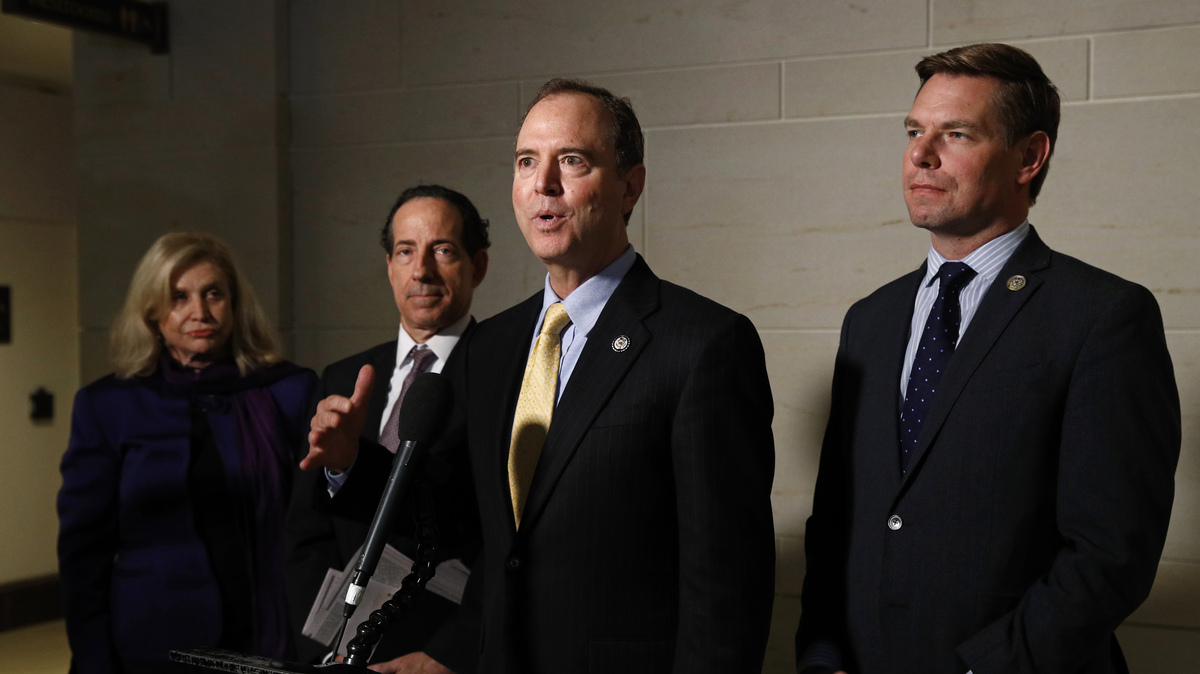 Rep. Adam Schiff (center) chairs the House Intelligence Committee, which would conduct any open hearings under the House impeachment inquiry, according to procedures specified in a resolution formalizing the process.

The impeachment inquiry enters a new open phase with a House vote on a resolution formalizing the impeachment inquiry. The measure drafted by House Democrats lays out the ground rules for public hearings, provides procedures for the president and his counsel to respond to evidence and sets out the process for considering articles of impeachment in the Judiciary Committee and the full House.

House Speaker Nancy Pelosi, D-Calif., announced the vote in a letter to House Democrats this week after weeks of noting that there is no requirement for a full House vote. The move means that the House is another step closer to voting on articles of impeachment against President Trump.

House Rules Committee Chairman Jim McGovern, D-Mass., the author of the House resolution, told NPR that the vote means the House is "entering a different phase" on the impeachment process. He said that he expects Democrats to be largely united on the vote and that when he briefed the caucus on the details, he stressed that "a clear transparent process was important."

The vast majority of House Democrats publicly back the inquiry; just two members broke with leadership, for a final vote of 232-196.

The move is also a way for Democrats to try to take away the primary attack from Republicans, who for weeks have declared the current inquiry a "sham" because the House hadn't gone on the record with a vote formalizing it.

But House Republican Conference Chair Liz Cheney called the impeachment investigation "broken" and "tainted" and said, "We're not going to participate in helping them provide legitimacy to that process."

Ohio Rep. Jim Jordan, the top Republican on the House Oversight Committee and a reliable ally of Trump, predicted that "every single Republican" will vote against the resolution.

GOP leaders are urging their members to vote no on the resolution, circulating talking points that slam the "Soviet style" process that they say has a "predetermined outcome of impeaching President Trump."

Here's how the process could play out as the three committees tasked with investigating the Ukraine affair continue their closed-door interviews:

The resolution designates House Intelligence Committee Chairman Adam Schiff, D-Calif., as the point person to preside over any public hearings.

"The American people will hear firsthand about the President's misconduct," Schiff said in a statement on Monday, but he has not indicated which witnesses he would call.

Schiff and the top Republican on the panel, Devin Nunes, R-Calif., are the two lawmakers who would lead the questioning in hearings — but they can yield to their staff counsels. The bulk of the questioning during closed-door depositions conducted to date has been done by Democratic and Republican committee lawyers.

Republicans can request witnesses to appear at the open hearings and can request that subpoenas be approved, but those need to be approved by the majority.

Democrats have said they would like William Taylor to testify in open session. He is the top U.S. diplomat in Ukraine, and he gave a detailed account of the parallel foreign policy effort led by Rudy Giuliani, the president's personal attorney, to leverage military assistance for investigations into former Vice President Joe Biden and his son, Hunter.

The resolution directs the Intelligence Committee to issue a report on its findings and recommendations and send the report to the House Judiciary Committee, which will consider any potential articles of impeachment. It also has to be publicly released. The report will be made in consultation with the House Foreign Affairs and Oversight committees — the two other panels that have been participating in the witness interviews so far.

It is also up to Schiff to publicly release any transcripts of closed-door testimony — potentially removing or blocking sensitive information.

Pelosi and most House Democrats have stressed that the current impeachment probe be narrowly focused on the issues around the Ukraine matter. But all the House panels investigating any potential impeachment issues are directed to send their evidence to the Judiciary Committee.

Judiciary hearing on articles of impeachment

The House Judiciary Committee is the panel that has jurisdiction over impeachment proceedings. Once the Intelligence Committee sends its report to the panel, it can begin the process of drafting articles of impeachment.

Top Democrats argue that the president's alleged push to withhold military assistance for Ukraine — which Congress had already authorized — in order to secure a commitment for an investigation for his own domestic political benefit is grounds for an article of impeachment. But it's unclear what the specific charge in the article would be.

Articles of impeachment are compared to an indictment, and the standard set forth in the Constitution is broad and at the discretion of the majority: "high crimes and misdemeanors."

Schiff has made it clear that he does not plan to go to court to enforce subpoenas for testimony and documents from those administration officials who have refused to comply. Instead, he has maintained that those Trump officials "will be building a very powerful case against the president for obstruction — an article of impeachment based on obstruction."

Judiciary markup and vote on articles of impeachment

The Judiciary Committee released its own procedures on Tuesday for how it will consider any articles of impeachment, separate from the House resolution.

Chairman Jerry Nadler, D-N.Y., said in a written statement that the committee's process confers "rights for the minority and for the President equal to those provided during the Nixon and Clinton inquiries."

These include the ability of the president's lawyers to receive copies of documents and evidence, to attend sessions and hearings when evidence is being presented, to question witnesses and to respond to the Democrats' arguments.

Once the Judiciary Committee completes its hearings and votes on any articles of impeachment, its report would go to the full House for a vote.

There is no timeline for these next steps in the House, but Democratic leaders have indicated that they would like to wrap up the process before the end of the year.