Accessibility links
State Department Solicits Comments On Keystone XL Pipeline The public had its first and only chance to meet with State Department officials about a new environmental analysis of the Keystone XL pipeline this week. Some protesters drove hours to attend. 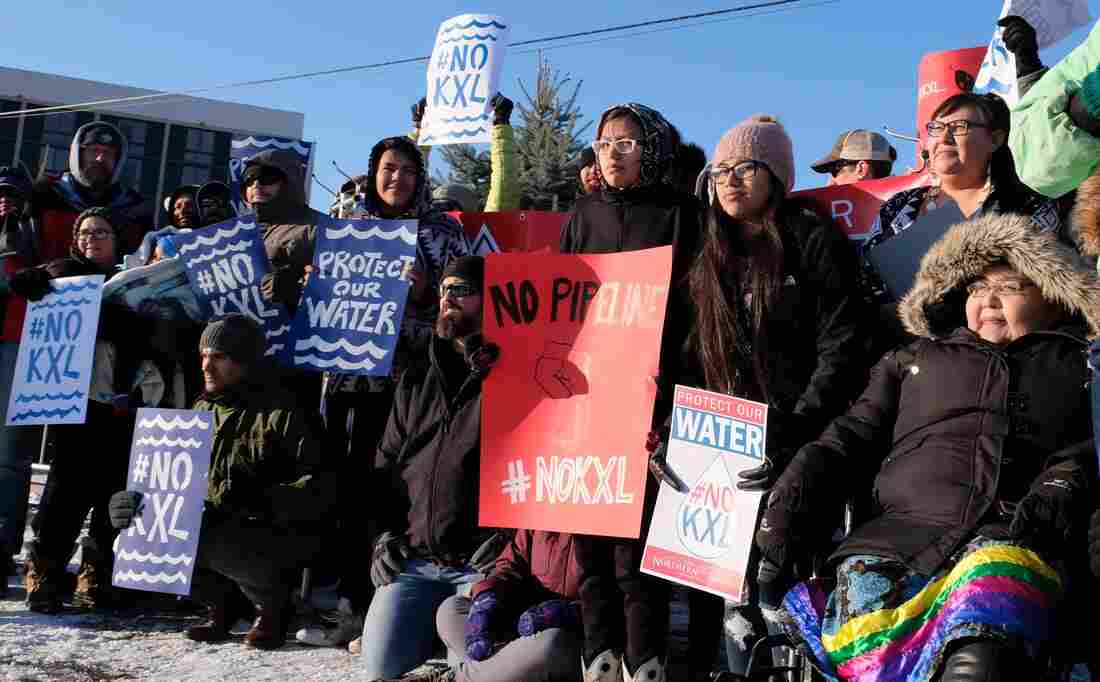 Keystone XL protesters pose for a photo in 19-degree weather ahead of a public meeting in Billings, Mont., on Tuesday. The State Department is collecting public comments on its revised environmental impact statement for the pipeline. Olivia Reingold/Yellowstone Public Radio hide caption 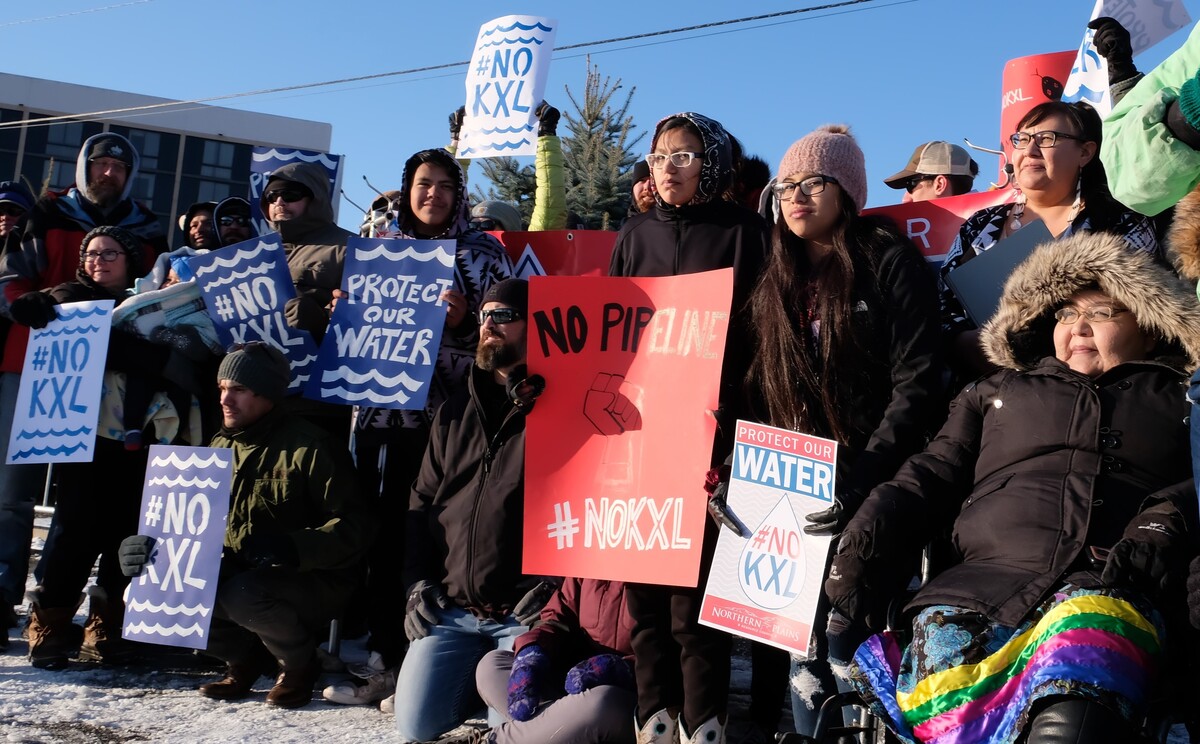 Keystone XL protesters pose for a photo in 19-degree weather ahead of a public meeting in Billings, Mont., on Tuesday. The State Department is collecting public comments on its revised environmental impact statement for the pipeline.

"I think it's at least 19 degrees right now," Iron Cloud said, shaking in a traditional ribbon skirt and ballet flats with no socks. "Who does that?"

She's a tribal council member for the Fort Peck Assiniboine and Sioux tribes, and said she drove more than six hours in the snow to deliver this message: "The government needs to speak with us as people."

"We have our children," she said. "I have 46 grandchildren."

Later, Iron Cloud went inside to declare her opposition to the pipeline at a comment station with a stenographer.

Because the pipeline would cross an international border, the State Department is collecting public comments on its revised environmental impact statement for the pipeline. If built, the controversial extension would carry tar sands oil from Hardisty, Canada, to Steele City, Neb.

The Obama administration killed the pipeline but President Trump revived it by presidential permit.

The State Department event wasn't a hearing, more like an open house with poster boards, maps of the pipeline's proposed path and occasional arguments between people who came to offer comment.

A woman stood up in the center of the room, clutching her phone in front of her to livestream the confrontation.

"If you don't sign the contract your land will be taken through eminent domain, how is that a fair process?" she asked.

"Excuse me," he said. "Keystone has treated me more than fair."

He owns a 1-mile stretch of land in northeastern Montana that the pipeline would cross. After things cool down, he said the pipeline's owner, TC Energy, would give him a stipend worth 2% of his annual income, "but the big winners I think locally, is going to be the county for schools, roads, hospitals."

That's because the pipeline could more than double property tax receipts in some counties, according to a recent court filing by the Montana Attorney General's Office.

Todd Devlin is a county commissioner for Prairie County, a horizontal slice of northeast Montana. He said his tax base is limited because his county has about 1,100 residents and is 43% federal land. So to him, supporting the pipeline is a no-brainer.

The environmental draft marks possible repercussions on a scale from "beneficial" (impacts that would improve resources) to "significant" (impacts that would have adverse effects). Six areas got a minor or moderate rating. That's soil, air quality, water resources, biological resources and cultural resources. A seventh category, greenhouse gases and climate change, breaks that format. Instead of a rating, it says there would be direct and indirect emissions from the project.

Jane Kleeb, who came all the way from Nebraska, asked Prairie County Commissioner Devlin if he really thought the environmental risks were worth the money.

"When in America was it OK for a foreign oil pipeline, a pipeline that's going to carry foreign tar sands through our land, through tribal lands, down to the export terminal for a refinery that's owned by Saudi Arabia," she said. "How is that in the America's interests?" 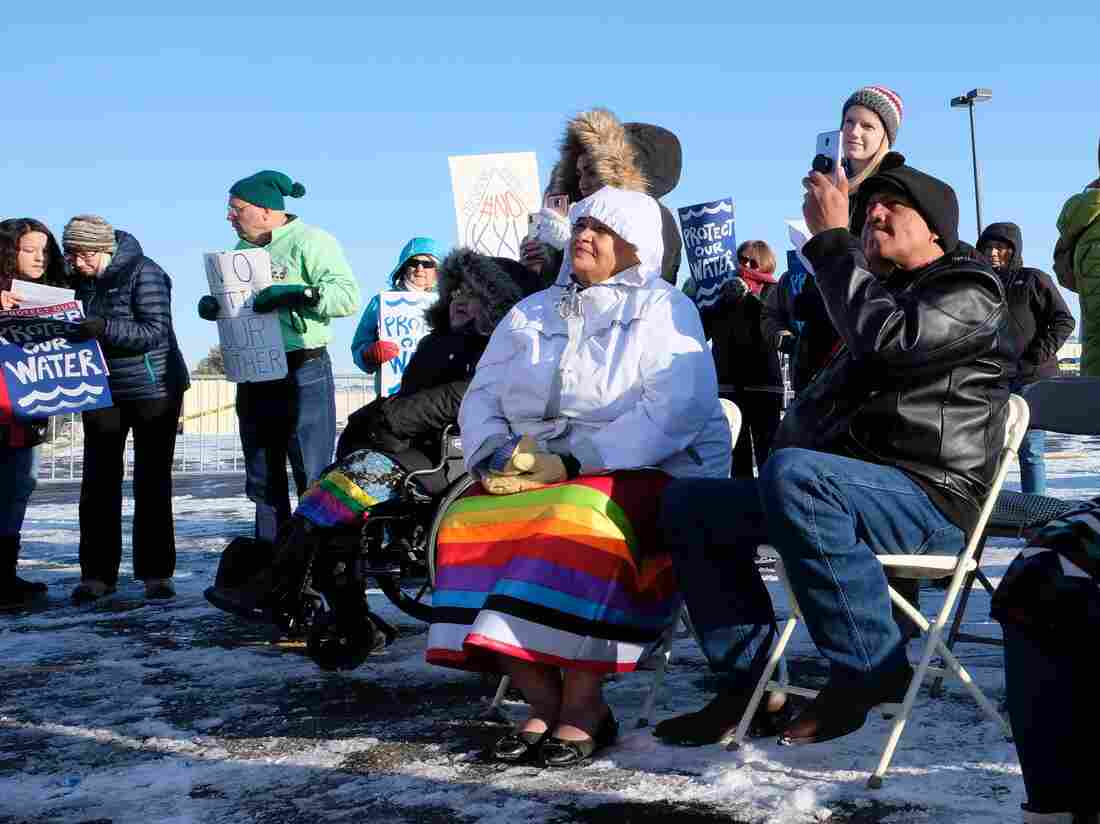 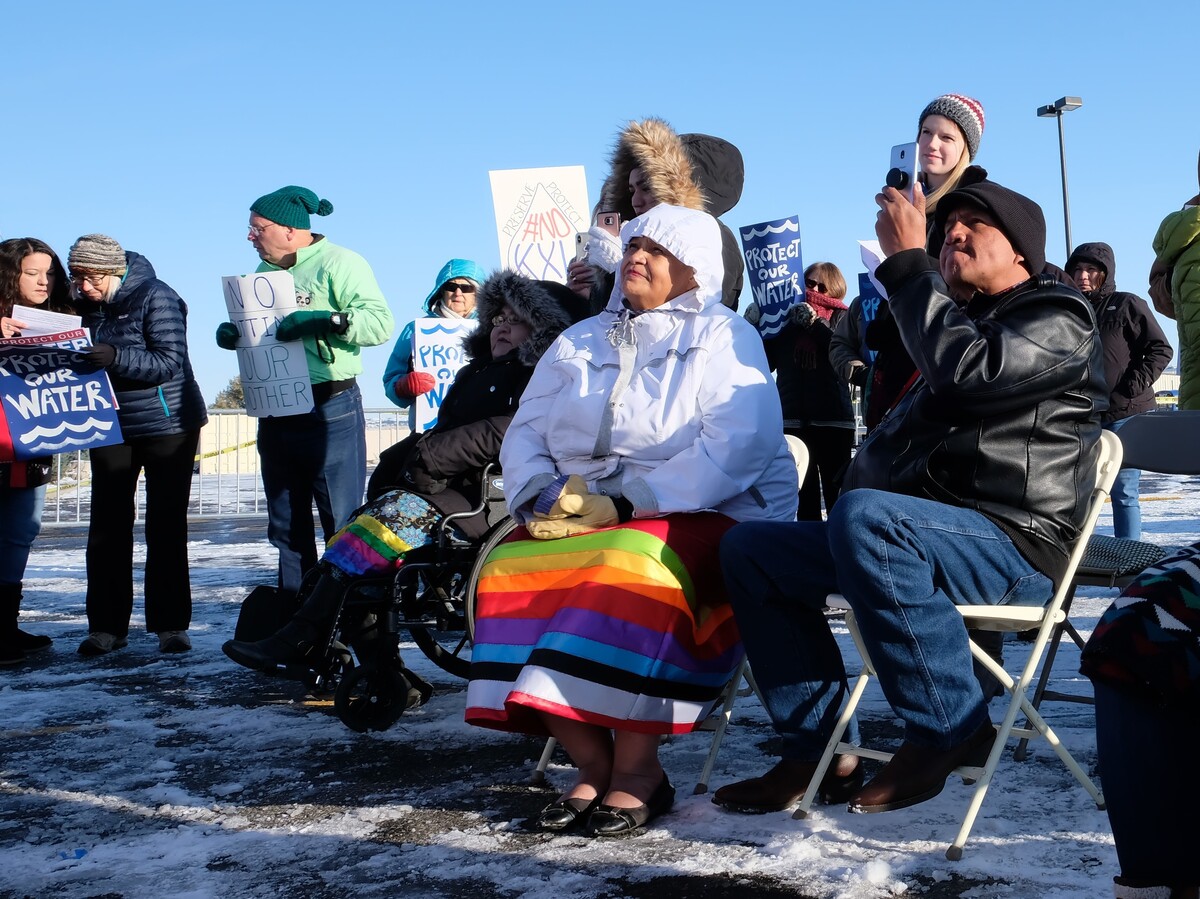 In his newsboy cap and bluejeans, Devlin stood up and told Kleeb that he and other Montana county commissioners helped negotiate deals between landowners and TC Energy. He said the pipeline got his support once his landowners called him and said, "Mr. Devlin, they have treated us more than fair."

"We said we were satisfied with that," he said. "We wanted to make sure our landowners supported it, and when they were, we left it be and supported it."

This dialogue is what James Dewey, a spokesperson for the State Department, said was the point of Tuesday's event.

How many comments are part of that record? He pulls out his phone to see.

"Currently we have 67 comments received," he said. "I know there's a lot more people out there that have comments to give."

On Instagram alone there are more than 5,000 posts with the hashtag "Keystone XL." So why aren't there more than 67 comments on the draft? Dewey says it's not his job to answer that question, only to encourage more comments.

The comment period for the State Department's environmental draft ends Nov.18, but the pipeline continues to be challenged by three lawsuits, all being heard by the same federal judge in Great Falls, Mont.

Earlier this month, TC Energy informed the court it intends to spray weeds, haul pipe and knock out other preconstruction activities ahead of the pipeline's tentative construction date next year.