Accessibility links
More Than 65 Dead After Fire Engulfs Train In Pakistan The train caught fire in the eastern province of Punjab after a cooking stove smuggled aboard by a passenger exploded. Some of those killed died while leaping from the moving train, officials said.

More Than 65 Dead After Fire Engulfs Train In Pakistan

More Than 65 Dead After Fire Engulfs Train In Pakistan 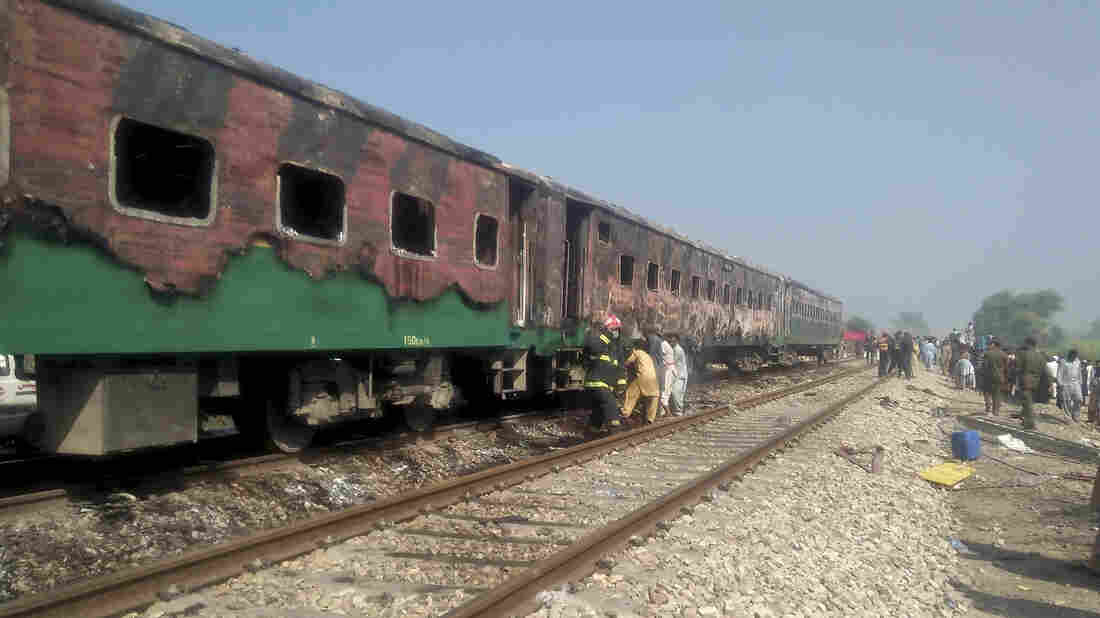 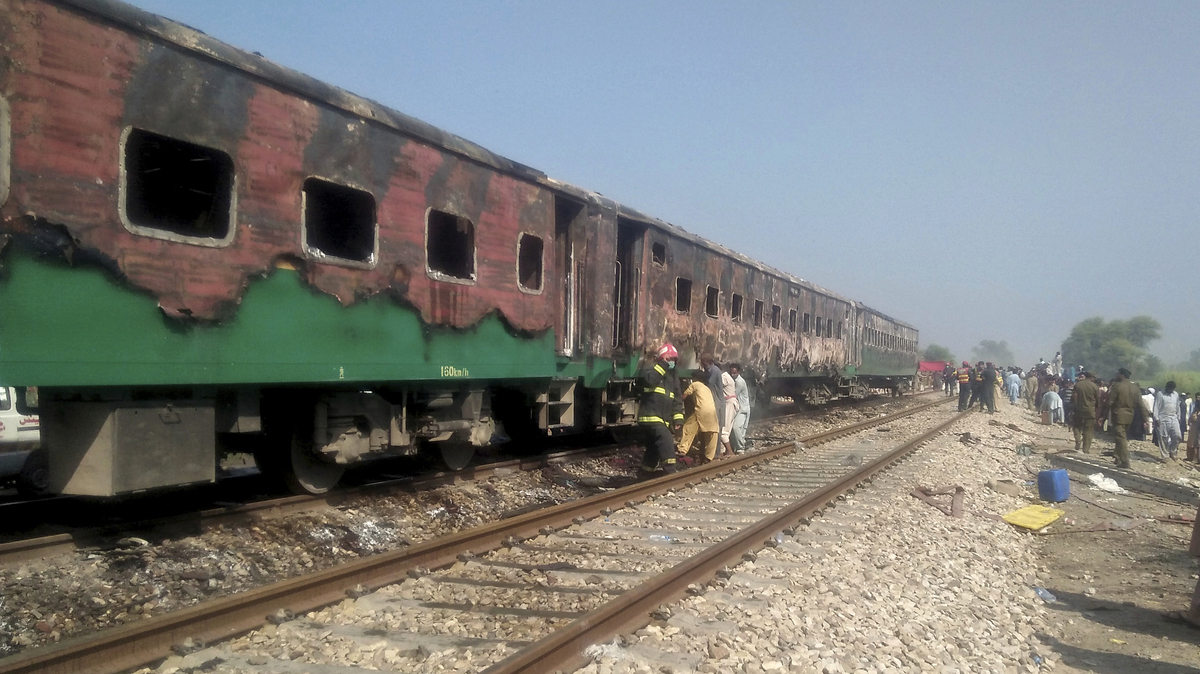 Pakistani officials examine a train damaged by a fire in Liaquatpur, Pakistan, on Thursday. A massive fire engulfed three carriages of the train traveling in the country's eastern Punjab province.

Fire swept through a train in Pakistan early Thursday, killing more than 65 people after a natural gas cylinder being used by a passenger to cook breakfast suddenly exploded, officials said.

Some of the deaths were caused as passengers leaped from the moving railway cars to escape the spreading flames, according to multiple railway officials.

The train departed from Karachi and was heading into northern Pakistan on a journey that would have taken more than a day. The cylinder explosion occurred near the city of Liaquatpur, about 350 miles southwest of the capital, Islamabad. The fire quickly spread to three cars, said Ali Nawaz, a spokesman for Pakistan's railways.

Pakistani television showed images of fire licking out of the train windows and plumes of black smoke, as firefighters tried to douse the carriages.

"People were jumping off; some of them were on fire," a witness told local Pakistani media group Geo.

Many of the passengers belonged to a conservative Muslim evangelical group, known as Tableeghi Jammat, who were on their way to a religious conference.

Dozens more people were injured as a result of the fire, said Nawaz and other officials. Many of them were in critical condition. Local media reported that some of the dead were so badly burned that they could not be identified.

Rescue workers spent the morning sifting through the wreckage, looking for survivors and aiding the injured.

Pakistan's railways minister, Sheikh Rashid, told local media that the accident occurred when two gas stoves blew up as people were cooking breakfast in a carriage, and he said most deaths occurred from people jumping from the train.

It was not immediately possible to reconcile Rashid's account with those of his own officials, who referred to a single cooking stove causing the fire.

It is common for poor passengers to ignore rules and bring their small gas stoves aboard to cook meals. Some passengers must have "hidden the gas cylinder in their clothes" while boarding the train, a Pakistan Railways official told DawnNewsTV.

Pakistan's Prime Minister Imran Khan expressed his condolences to the victims' families and said he had "ordered an immediate inquiry."

Deeply saddened by the terrible tragedy of the Tezgam train. My condolences go to the victims' families & prayers for the speedy recovery of the injured. I have ordered an immediate inquiry to be completed on an urgent basis.

Minister for Human Rights Shireen Mazari tweeted that it was an avoidable tragedy because "ever since I can recall while travelling by train no baggage check or restrictions enforced."

There are often deadly accidents on Pakistan's poorly maintained railways, but this was one of the worst in over a decade. The network remains popular with ordinary Pakistanis because it's cheap and largely reliable.