Accessibility links
Opinion: Why Syria's Oil Matters What happens to the country's small oil resources — once a revenue stream for ISIS — will be important not to world oil markets but to the future of Syria itself, write Roger Diwan and Daniel Yergin. 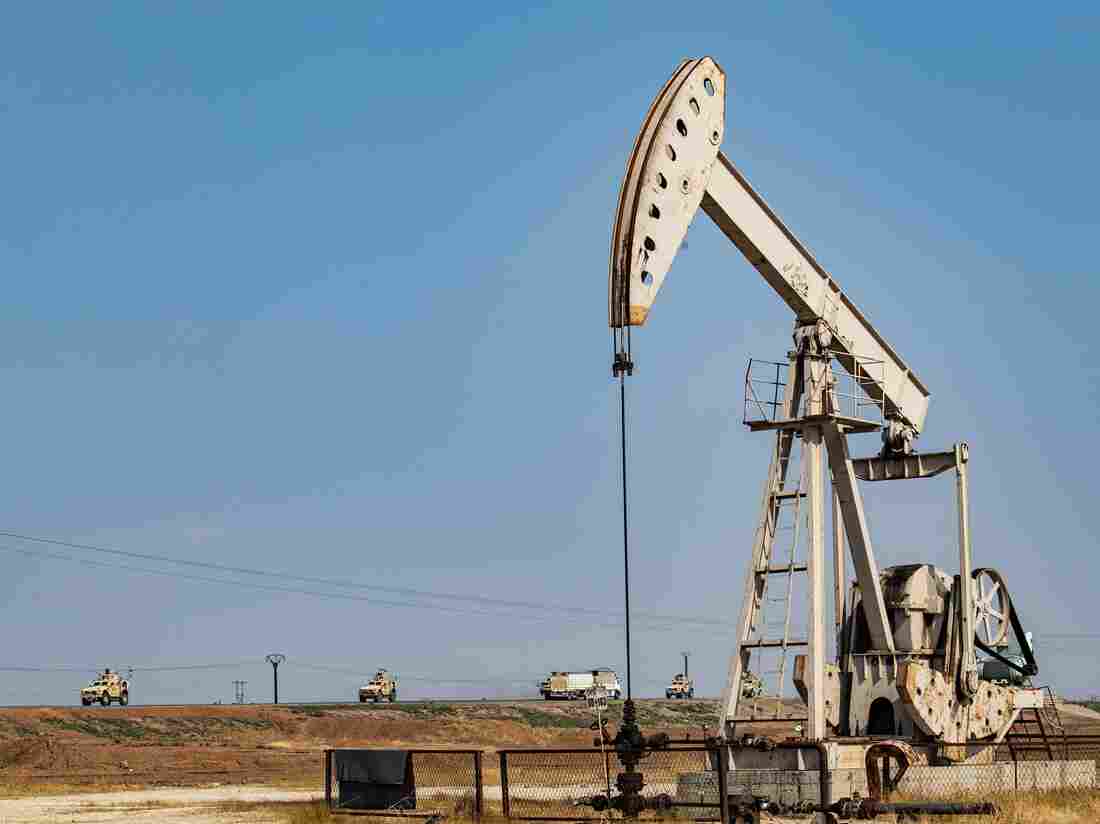 A convoy of U.S. military vehicles, arriving from northern Iraq, drives past an oil pump jack in the countryside of Syria's northeastern city of Qamishli on Oct. 26. Delil Souleiman/AFP via Getty Images hide caption 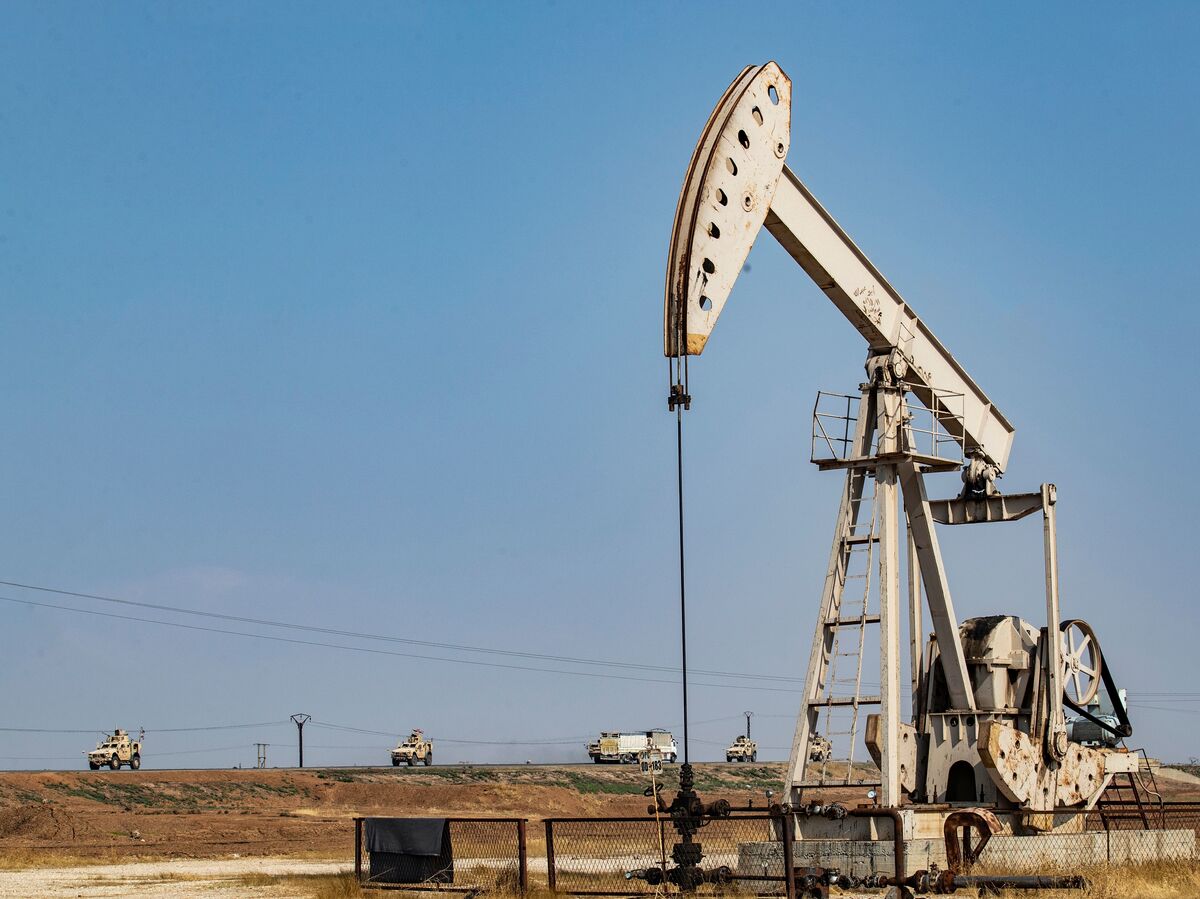 A convoy of U.S. military vehicles, arriving from northern Iraq, drives past an oil pump jack in the countryside of Syria's northeastern city of Qamishli on Oct. 26.

Syrian oil is suddenly a hot topic in Washington, D.C. The announcement that U.S. forces in Syria, while generally withdrawing, would remain to protect the oil fields has focused a spotlight on the significance of those resources.

Syrian oil has always been of prime importance to President Bashar Assad's regime. It provided about 25% of government revenues prior to the civil war. But that oil had hardly any importance to the world oil market. At 385,000 barrels per day before the civil war began in 2011, it was barely a footnote for the global market — less than half a percent of world supply.

But the rise of ISIS did suddenly make Syrian oil important to the world community — not in terms of volume but because of what it allowed ISIS to do. During the ISIS "caliphate," production plunged by 90% to about 40,000 barrels a day in 2015. Yet ISIS was able to turn the barrels under its control into money, smuggling them into Turkey, selling in local markets — and selling to the Assad regime. Still, that minuscule amount of oil earned, at the peak, about half a billion dollars a year for ISIS, giving it the financial heft that no terrorist organization had ever had before, indeed making it by far the richest terrorist organization in the world. Among other things, it enabled ISIS to lure fighters from other groups in Syria and from abroad with higher wages.

With the rollback and then the defeat of ISIS, control of most of the oil fields passed into the hands of the Kurdish forces and the Syrian Democratic Forces. During the campaign against ISIS, the above-ground infrastructure was a target of bombing, aimed at depriving ISIS of revenues, and was further damaged in battles. There was no normal maintenance of the oil system. There are no hard numbers, but it is thought that the total output today is in the 15,000-30,000 barrels a day range. As such, it would still be an important source of revenues for the SDF and the Kurds.

If U.S. Takes Syrian Oil, It May Violate International Laws Against Pillage

It will take a lot of investment — and time — to bring back the production to the pre-civil war level, and there will be few companies willing to commit even when the sovereignty issues are resolved between the various factions controlling the oil fields.

Syria had a relatively diverse foreign investor mix before the war — from large companies like Total and Sinopec to small companies such as Gulfsands — working alongside the state Syrian Petroleum Company in production-sharing agreements. The ramp-up in violence and European Union sanctions imposed on Syria at the end of 2011 led to an exodus of nearly all the foreign companies.

Yet even prior to the civil war, Syria was not a particularly attractive destination in commercial terms for oil companies. The government took 85% of the revenues from operations, compounded by heavy-handed administration by the regime. The oil fields are concentrated in two regions in the vast eastern desert — one in the northeast of the country and the other along the Euphrates River — and are in no way comparable to the bountiful oil provinces of Iraq or the ones in the Persian Gulf. The reserves in Syria are small, dispersed and far from export facilities on the Mediterranean. Altogether, Syria's oil resources are marginal in the great oil game of the Middle East and for the world industry.

There are several possible rationales for maintaining U.S. forces in the oil fields. One is to assure that some of these fields do not again fall into the hands of a resurgent ISIS. While ISIS leader Abu Bakr al-Baghdadi died a few days ago, and the group's spokesman was killed, there are still many thousands of ISIS fighters in Iraq and Syria, plus more held in makeshift prisons. Even if there is little chance of the "caliphate" being restored, these fighters could still cause further damage to the fields, which are the most tangible resource that Syria has.

A second possible reason is to keep the oil fields out of the hands of Assad, and possibly the Russians, and maintain as a bargaining chip for the opposition in the course of working out some kind of settlement with the Assad regime. A third would be to preserve these fields as an engine of recovery for the day when there is a post-Assad regime. But, whatever the course, it would be a long time before those fields can begin to even approach the pre-civil war level of production.

And, from the perspective of the global market, they will remain insignificant. Just look at the scale. Syria was at that 385,000 barrels per day in 2011. That same year, the United States produced 5.7 million barrels per day. Since then the U.S. has grown to 12.6 million.