Accessibility links
Book Review: 'On The Backs Tf Tortoises' Challenges Us To Consider How Everything Is Intertwined Nominally an environmental and social history of the Galápagos Islands, it lays bare the entangled issues confronting us as we attempt conservation efforts while facing a sweeping ecological crisis. 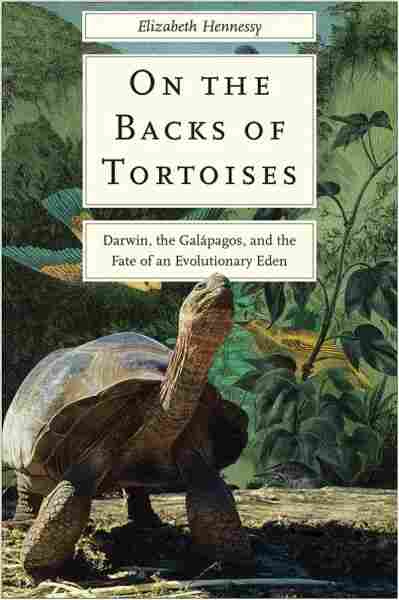 On the Backs of Tortoises

Darwin, the Galapagos, and the Fate of an Evolutionary Eden

Title
On the Backs of Tortoises
Subtitle
Darwin, the Galapagos, and the Fate of an Evolutionary Eden
Author
Elizabeth Hennessy

One of the longest-running jokes in The Good Place is about almond milk.

After the big twist in the show's first season, moral philosopher Chidi Anagonye agonized about being condemned to The Bad Place, and decided early on what had tipped the scales: "I used almond milk in my coffee, even though I knew about the negative environmental impact." For ages, it's a running joke that such a particular infraction could be the thing that condemned him. But eventually, they get a look at the judgment system and realize he was right all along: Every decision has consequences, and nothing is decided in a vacuum.

It's impossible not to think of Chidi and his many philosophical thought-exercises-slash-inescapable-moral-quagmires while reading On the Backs of Tortoises. Nominally an environmental and social history of the Galápagos Islands, Prof. Elizabeth Hennessy lays bare the many intertwined issues that confront us as we attempt conservation efforts in complex situations, while faced with a sweeping ecological crisis.

The tortoises of the Galápagos are "keystone species and ecosystem engineers," and since sailors first began using the islands in 1535, they have been the most obvious barometer of the effect of people on an ecosystem. (Hennessy notes grimly that "three of the fifteen species" that originally populated the islands "exist only as historical records.")

Using tortoises as a marker, Hennessy traces the various ways the islands — and nature itself — has been framed, both by opportunists and by conservationists. By turns, tortoises are food or natural treasure; they must be carefully sheltered or made celebrities for their own good. The islands spend time as a prison colony, promised frontier for settlers, American military base, and national park with a controversial tourist industry. The thread of natural conservation runs throughout, but even there, the meaning has changed. For Walter Rothschild a century ago, it was collection of specimens. Now, it is attempts to breed tortoises for release into a wilderness that's being shaped by the introduction of foreign animals and plants. (In 1957, fishers left three goats on Pinta island for food. Their eradication has become a cottage industry, with thousands of kills a month that are left to rot; nothing is easily parsed.)

And much like poor Chidi getting frequent moral paralysis in the face of complexities or a looming crisis, moments in On the Backs of Tortoises can be tough reading, with very few answers for some very pressing questions about culture, politics, and blackberries (an invasive species whose presence on the island is a growing problem).

Hennessy is clear about the futility in dreaming of a pristine pre-1535 Galápagos, unpopulated and untouched — "There is no return to Eden," she says — but the current problems can feel extremely immediate, and the current solutions not particularly hopeful. The tortoises that do hatch at the tourist-friendly breeding center are springing from a very small pool, and are released into islands full of rats that prey on them, goats that eat their food, and people whose needs will only grow. Where do you begin?

But this book isn't meant to offer easy answers. Early on, we read the old story about "turtles all the way down" — the concept that the world is balanced on the back of an ever-expanding stack of helpful Testudinidae. But as Hennessy points out, such an idea doesn't actually indicate that there's a single answer to a difficult question; rather, that stack of tortoises suggests that, if we're looking for balance, there's always something more to learn beneath the things we think we know.

This book works the same way, beginning with a gripping history and then delving deeper — the world of the Galapagos becomes more complicated as we go, until we understand the underpinnings of any decision (almond milk or otherwise). It's a book about the ways we need to understand how deeply everything is entangled, and just how far down it goes. The result is a well-researched and thought-provoking read — whether you're well-versed in the intricacies of conservation or have only just begun to long for a look at the tortoises yourself. On the Backs of Tortoises is a natural history that asks important questions, and challenges us to think about how best to answer them.