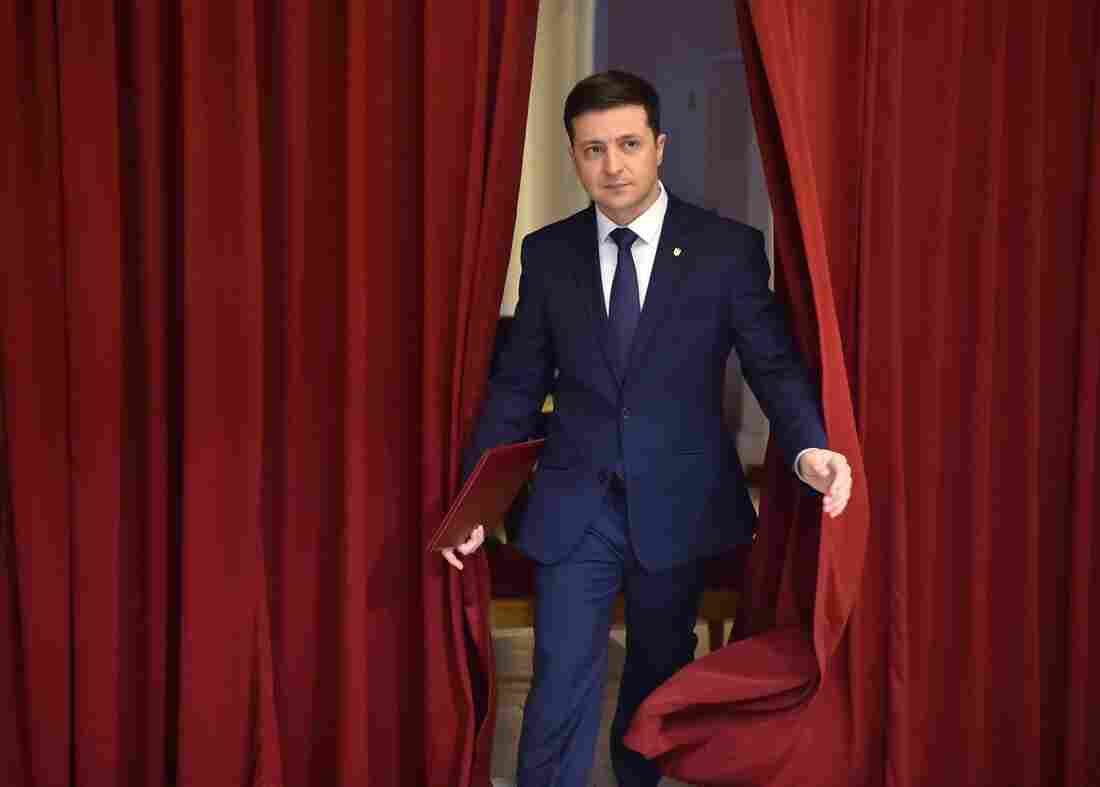 Volodymyr Zelenskiy enters a hall in Kyiv on March 6 to take part in the taping of the television series Servant of the People. His role on the show was as a fictional president of Ukraine. Sergei Supinsky/AFP/Getty Images hide caption 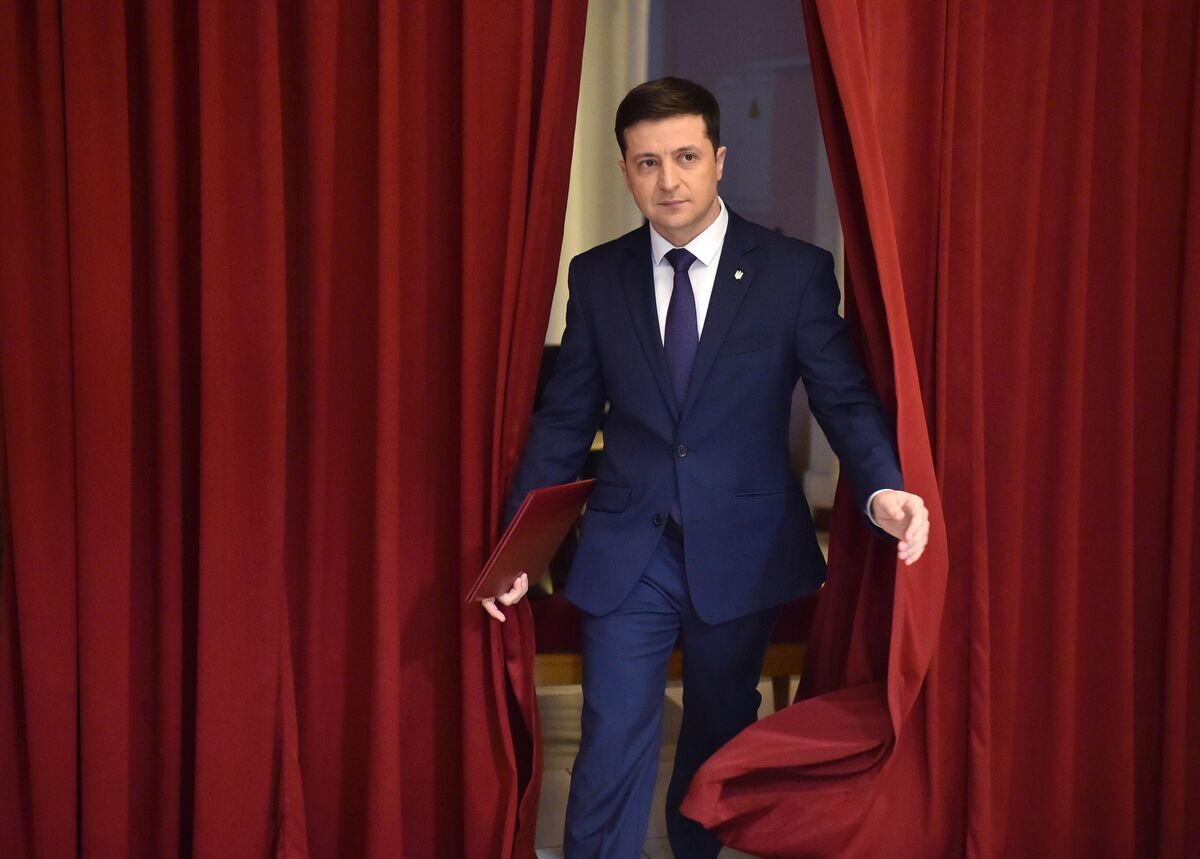 Volodymyr Zelenskiy enters a hall in Kyiv on March 6 to take part in the taping of the television series Servant of the People. His role on the show was as a fictional president of Ukraine.

If there were ever a person stuck in a place he never wanted to be, it's Ukrainian President Volodymyr Zelenskiy.

Zelenskiy had been in his post for only two months when he had that infamous July 25 phone call with President Trump — during which Trump asked the Ukrainian president to help investigate former Vice President Joe Biden. For Zelenskiy, the call made what was already a delicate diplomatic situation even more complicated.

Zelenskiy presides over a country that has been locked for five years in a bloody conflict with Russian-backed separatists that has left at least 13,000 people dead. It's a fight that has made Ukraine increasingly dependent on American military assistance. Now, the effort to secure that aid has thrust Zelenskiy to the center of the battle playing out in Washington over whether Trump should be impeached.

Until his election in April, Zelenskiy was a comedian best known for playing the president of Ukraine on TV. His wildly popular show was called "Servant of the People."

"He's quite a funny guy, like a really great comedian, a super talented actor. It's true that until last year, I would never have imagined somebody like that would run," says Ukrainian journalist Nataliya Gumenyuk, who grew up watching Zelenskiy on TV.

Gumenyuk says even though his show was a comedy, it made it possible for voters to give Zelenskiy a real shot. The political newcomer won election in a landslide with roughly 73% of the vote.

"Somehow in people's minds, people think he understands politics because he always makes jokes about politics," she says.

But now, Zelenskiy is no longer just playing a part, but in charge of a country that is not only mired in war, but struggling with a weak economy and rampant corruption.

Then there is the issue of Ukraine's relationship with the U.S. Asked about his phone call with President Trump, Zelenskiy told reporters from the sidelines of the U.N. General Assembly in September, "It was normal, we spoke about many things ... nobody pushed me." The remarks came during a joint appearance with President Trump.

Toomas Hendrik Ilves, the former president of Estonia, another Soviet republic, says there's no way Zelenskiy could have been prepared for that phone call.

"I mean, someone who had no real experience in foreign affairs let alone politics, shortly after winning and taking office is thrust into this huge power play involving the fate of his [country's] relations with the United States, and I fear he was just overwhelmed, if not out of his depth," he says. "If you have president of the United States, in so far as we can tell, holding up military assistance when you're in a war, that's pretty serious."

At his U.N. speech in September, Zelenskiy said that achieving peace in eastern Ukraine was one of his primary objectives. This helps explains why he raised the issue of U.S. military assistance in his July phone call with Trump.

The Trump administration had actually bolstered assistance to Ukraine when it delivered lethal aid to its military, a step the Obama administration had not taken. But by the time the two leaders spoke in July, nearly $400 million in future aid had been suspended, according to The Washington Post.

On the call, Zelenskiy told the American president he was ready for more U.S. military help, including Javelin missiles that help defend against Russian tanks, according to a rough transcript of the call released by the White House. 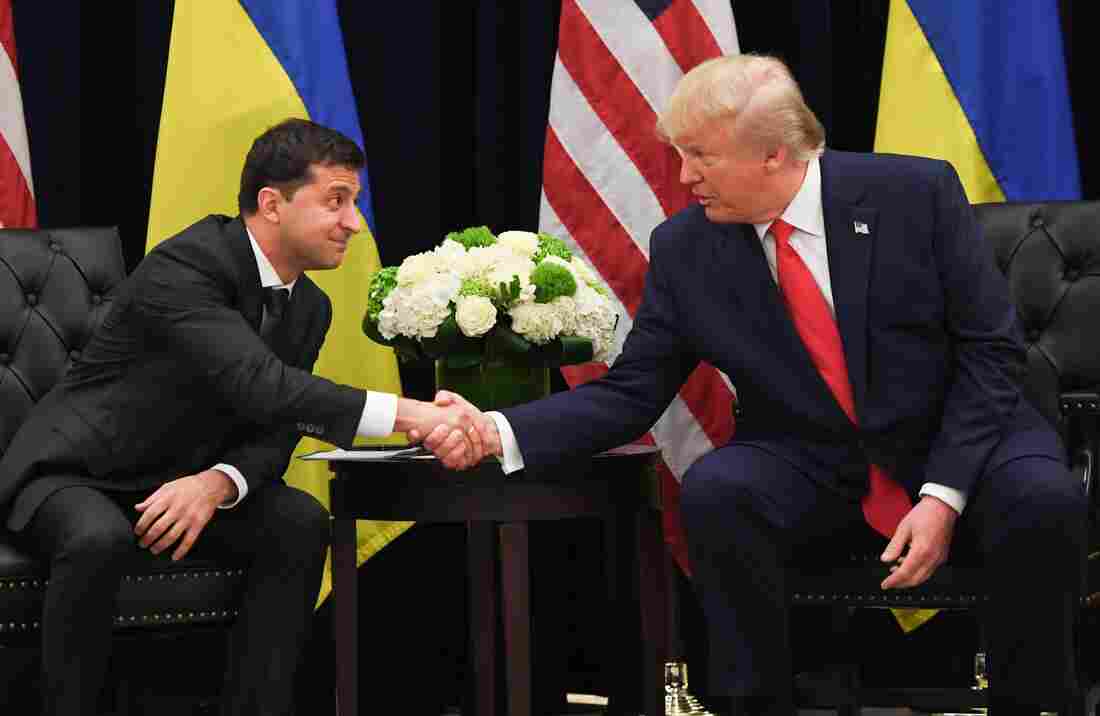 Zelenskiy shakes hands with President Trump during a meeting on the sidelines of the United Nations General Assembly on Sept. 25. Saul Loeb/AFP/Getty Images hide caption 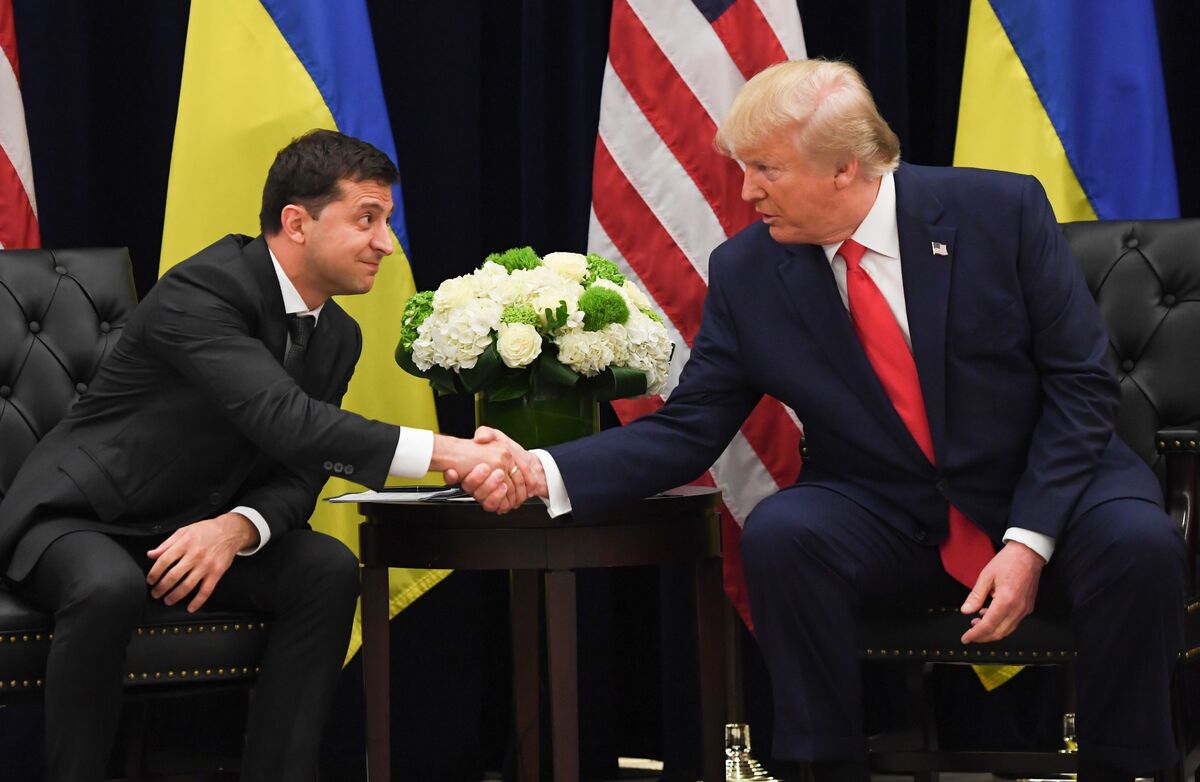 Zelenskiy shakes hands with President Trump during a meeting on the sidelines of the United Nations General Assembly on Sept. 25.

Trump's response: "I would like you to do us a favor though." Trump then asked Zelenskiy if he would "look into" Biden and the work his son Hunter did for the Ukrainian energy giant Burisma, as well as a conspiracy theory related to the 2016 hacking of the Democratic National Committee that U.S. intelligence has traced to Russia.

That seemed to signal a change, even though Trump has denied that there was any quid pro quo and described the call as "absolutely perfect."

"That military assistance was a strong signal of American support for Ukraine," says Steven Pifer, who served in the late 90s as U.S. ambassador to Ukraine. "So that's the official policy. And then you have the second policy, which the president seems to have outsourced to Rudy Giuliani."

Giuliani, the president's personal attorney, had been digging for information about the Bidens in Ukraine.

"That's part of the whole quid pro quo conversation with the Ukrainians," Pifer says. He says it left Zelensky in "a horrible position."

"It seems to me that President Zelenskiy is figuring out a path to navigate this without angering President Trump but also without doing stuff that plunges this country into our domestic politics," Pifer says. "It doesn't help Ukraine in any way to become a football in our 2020 election."

A political future beyond the phone call

All this has had dramatic ramifications in the U.S., where only the fourth impeachment inquiry in history is underway.

In Ukraine, Gomenyuk says, many people were closely following the story early on, concerned that Zelenskiy might somehow allow Ukraine's relationship with the U.S. to unravel. But now, she says, many seem to see Zelenskiy as navigating an impossible situation as best he can. 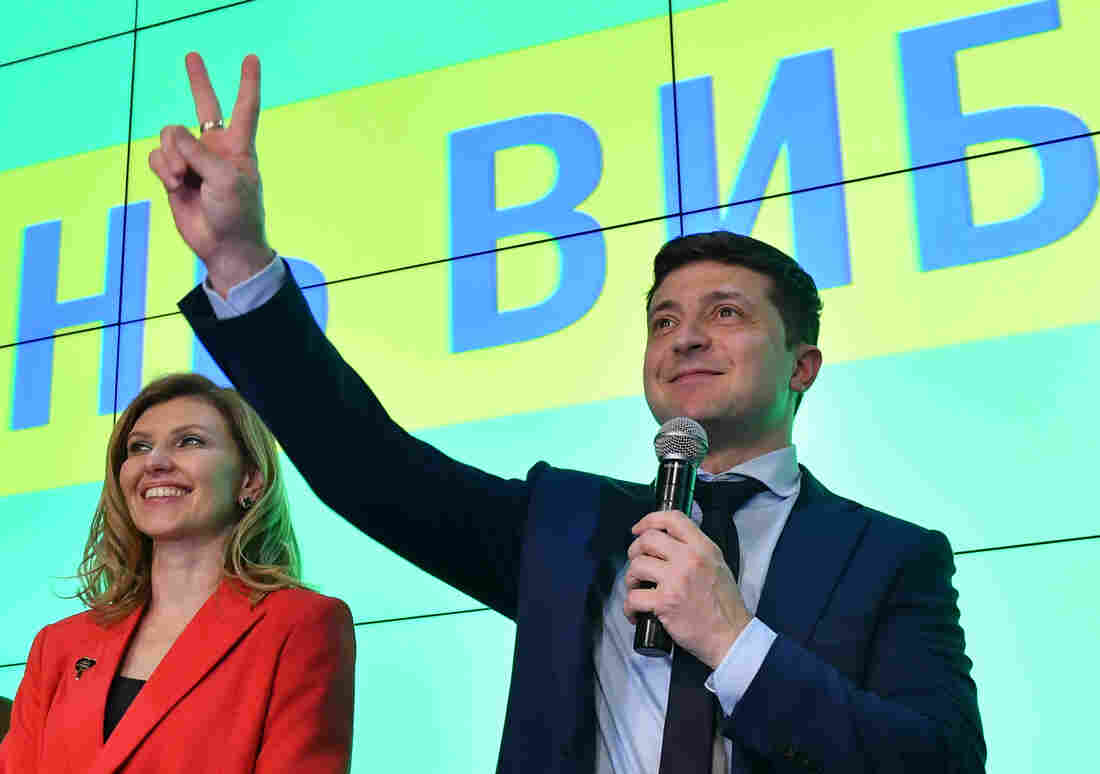 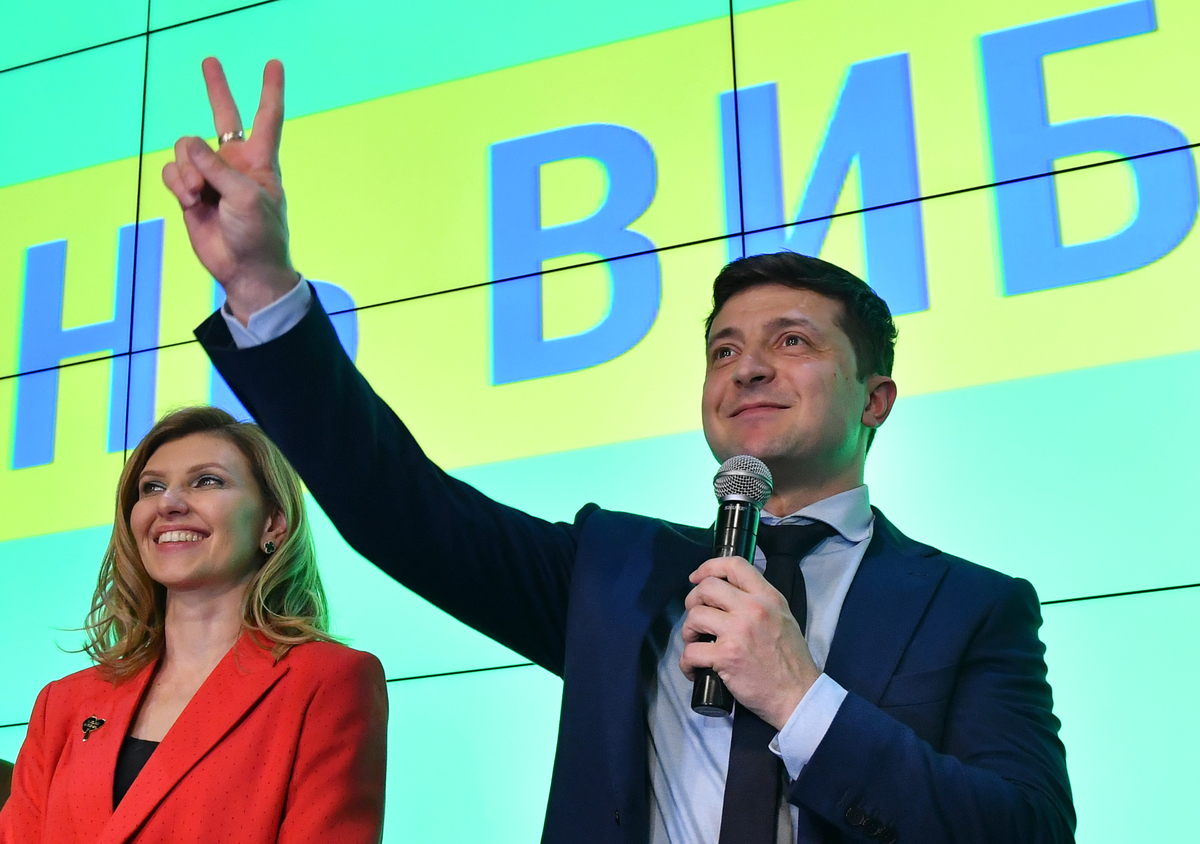 Zelenskiy and his wife, Olena, greet the crowd at his campaign headquarters in Kyiv on March 31. "He's very much a family man," Ukrainian lawmaker Sviatoslav Yurash said.

"It didn't make him better. You know, it didn't serve him for good, but it didn't harm him a lot," she says.

Other questions Zelenskiy is facing about some of his business ties could prove to be even more challenging for him. His critics point to connections to an oligarch who owns the TV network that aired Zelenskiy's show and, some suggest, helped him win the presidency. That oligarch, Ihor Kolomoisky, has himself faced accusations of corruption.

At the end of the day, there's a lot more that will determine Zelenskiy's political future than his relationship with President Trump.

Some see a chance for Zelenskiy to free Ukraine from its past. 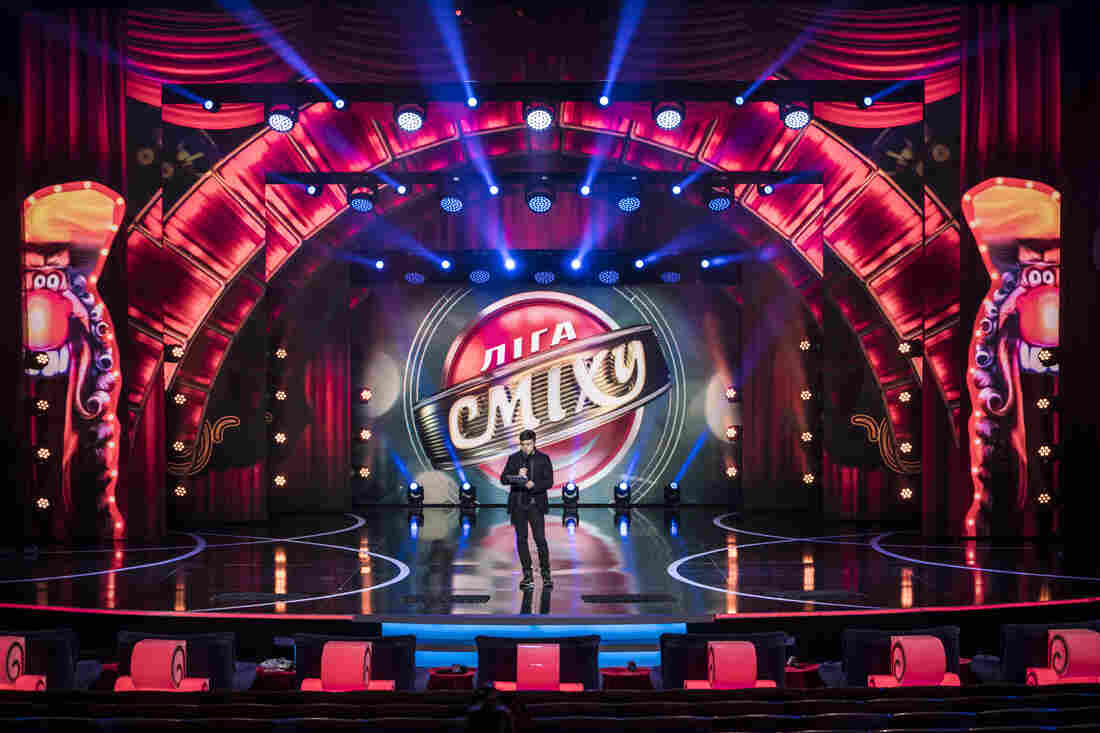 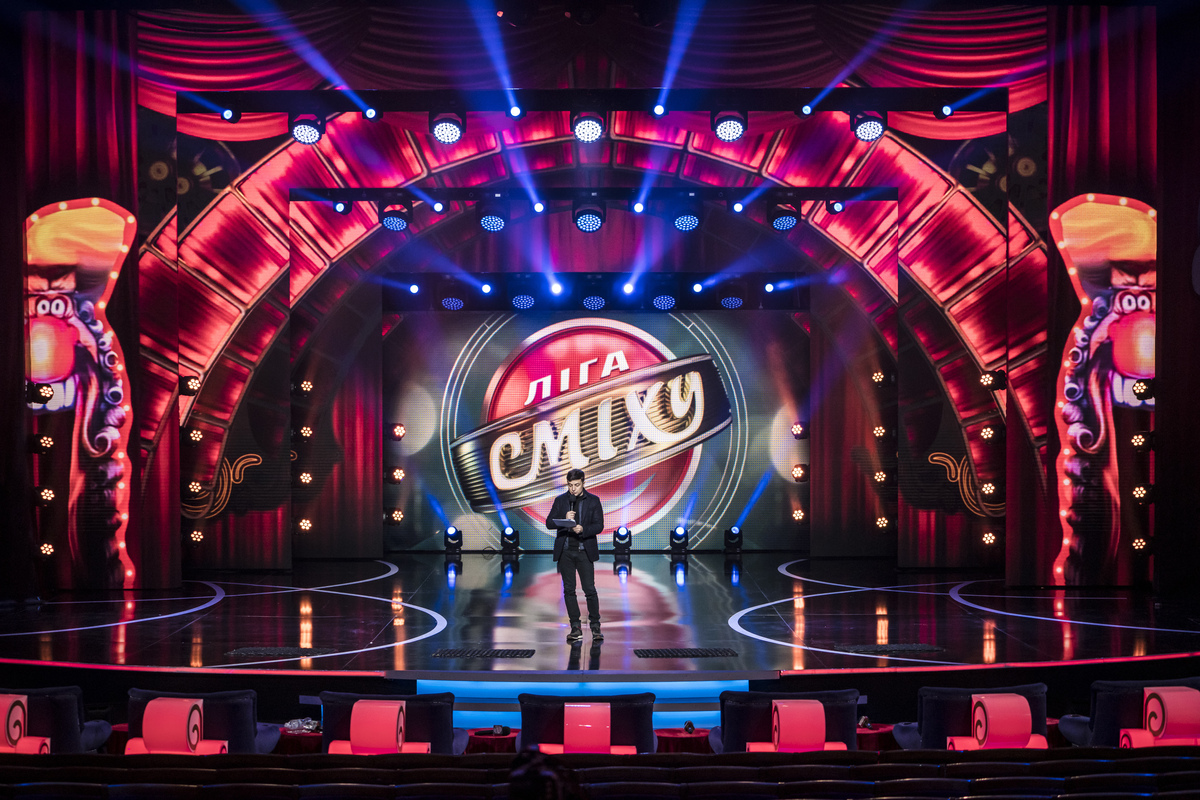 Zelenskiy attends the rehearsal of his comedy show Liga Smeha (League of Laughter) on March 19 in Kyiv, Ukraine.

They point to his own journey to the presidency that traces back to an industrial working-class city in southeast Ukraine.

"He's the guy that made it. That's his story. He's the guy from the tough neighborhood that made it," says Sviatoslav Yurash, who worked as a campaign adviser to Zelenskiy. At 23, he's now youngest member of Ukraine's parliament.

He sees in Zelenskiy a politician who can relate to Western-leaning people in Ukraine who long to be part of Europe, as well as the factory workers and coal-miners in the east who speak Russian and have cultural ties to Moscow.

Zelenskiy, he says, is the first politician he can remember who's genuinely inspired younger Ukrainians who'd lost faith in their long-corrupt political system.

"We are the generation who have been essentially let down completely by the choices of our political elites," he says. "We are basically the independent generation that has [grown] up to expect something else from our country than just to survive as many of the Soviet past did and we demand transformation."

And Zelenskiy has time to deliver. He began his address at the United Nations in September by saying, "Each of you, ladies and gentlemen, had the first speech from this rostrum. Please recall your feelings at that moment. Every one of you, respected and honored today, was once a beginner."

So as much as that infamous July 25th phone call has put Zelenskiy in a perilous position and the saga involving Trump has unexpectedly overshadowed his first months in office, Zelenskiy wants to remind people that he's just getting started.

Danny Hajek produced this story for broadcast. Heidi Glenn adapted it for the Web.