Accessibility links
Here's How Warren Finds $20.5 Trillion To Pay For 'Medicare For All' Sen. Elizabeth Warren released her plan to pay for single-payer health care without imposing new taxes on the middle class. She's looking to employers and billionaires, in addition to other sources. 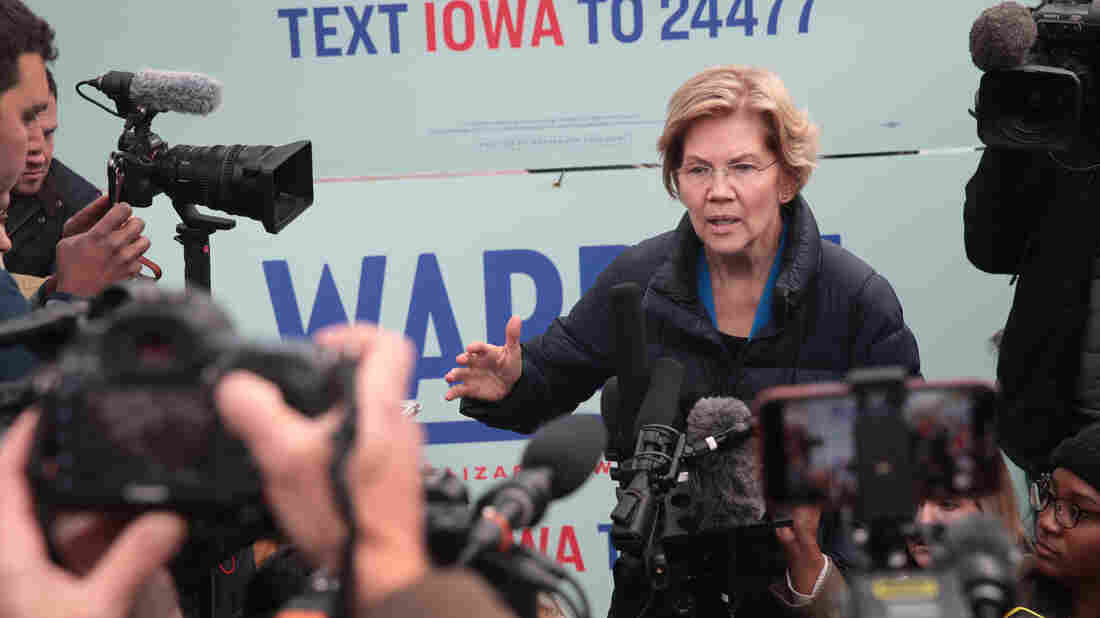 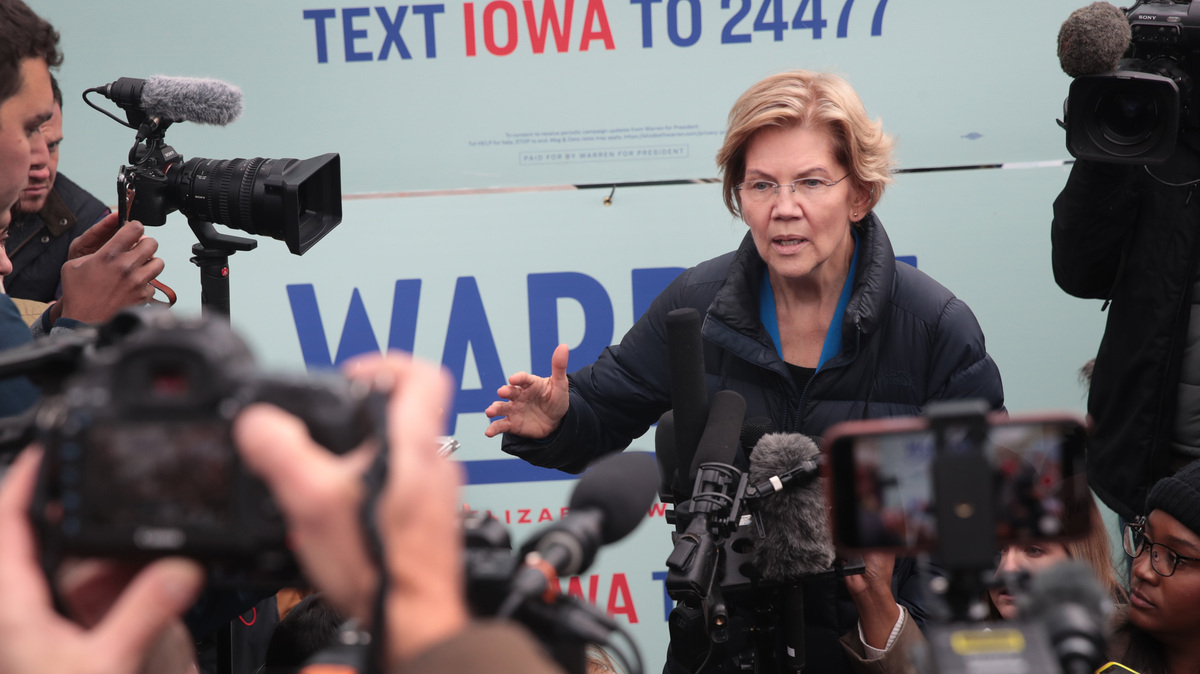 Sen. Elizabeth Warren speaks to reporters in Des Moines, Iowa, on Friday, after releasing her plan to pay for single-payer health care.

Sen. Elizabeth Warren says paying for "Medicare for All" would require $20.5 trillion in new federal spending over a decade. That spending includes higher taxes on the wealthy but no new taxes on the middle class.

The Democratic presidential candidate released her plan to pay for Medicare for All on Friday after being dogged for months by questions of how she would finance such a sweeping overhaul of the health care system. That pressure has been intensified by the fact that Warren has made detailed proposals a central part of her brand as a candidate.

Medicare for All is a single-payer health care proposal introduced by Sen. Bernie Sanders and cosponsored by multiple candidates in the presidential race, including Warren. It would virtually eliminate private insurance, including employer-sponsored coverage.

READ: Elizabeth Warren's Plan To Pay For 'Medicare For All'

It also represents a political risk, as multiple polls show that introducing a public option for health insurance coverage is more popular than a Medicare for All plan that almost entirely does away with private insurance.

Here's a look at what Warren has laid out to provide single-payer health care, including proposals to cut costs, where new revenue would come from, where funds would not be taken from and what comes next.

How Warren wants to reduce spending

Warren bases her plan off of a recent analysis from the Urban Institute, which estimated that under current law, Americans would spend $52 trillion over the next decade on health care — that includes many types of spending, from employers, individuals and all levels of government.

In that analysis, the Urban Institute calculated that under a single-payer plan that looks a lot like Medicare for All, costs would total $59 trillion over a decade, which would require $34 trillion in new federal spending.

Warren's plan estimates that total health costs could be held to $52 trillion and that $20.5 trillion in new federal spending would be necessary.

This question — what to pay hospitals and doctors — is a big part of what determines how much Medicare for All would cost. That's because Medicare pays doctors and hospitals much less than private insurance.

"This plan aggressively constrains the price of health care, paying doctors, hospitals and drug companies much less," said Larry Levitt, executive vice president for health policy at the Kaiser Family Foundation. "There would be a lot of adjustment required from from hospitals and doctors as their incomes go down."

Just how seismic such a shift would be would depend in part on how fast the transition is, he added.

"I think how quickly she proposes to transition to this new system will be really important because it would be very disruptive to the health care system," Levitt said. "You know, a quick transition would be hard and potentially result in shortages or increased wait times for health care."

Sanders calls for a four-year transition to Medicare for All — a pace that Levitt characterized as "quite quick." In a Friday blog post spelling out her proposal, Warren said she plans to unveil her transition plan "in the weeks ahead."

A letter from economists supporting the plan, provided by Warren's team, argued that these payment rates would work in part because doctors and hospitals would save substantially on administrative costs. Warren's team also says there would be ways to ensure that vulnerable hospitals, like those in rural areas, would get paid more, so they could stay in business.

Her proposal also establishes savings by projecting that Medicare for All could substantially slow medical cost growth. Warren also stipulates that state and local governments would redirect the more than $6 trillion they currently spend on Medicaid and the Children's Health Insurance Program (CHIP) to the federal government.

Where money would not come from

One thing that's notable about this plan is where the revenue doesn't come from. Warren had promised at a recent debate that she would not sign a bill that raises health care costs for the middle class.

This plan goes further: Middle-class Americans would no longer pay health premiums or copays and would also not pay new taxes to replace those costs. They would, however, pay taxes on whatever additional take-home pay they would receive from this plan. That would add $1.4 trillion in revenue, her team estimates.

This is a departure from Bernie Sanders' ideas about how to fund Medicare for All. One of his options is a 4% tax on families earning more than $29,000. At the Democrats' October debate, he explained that taxes would go up for many Americans under his plan.

"At the end of the day, the overwhelming majority of people will save money on their health care bills. But I do think it is appropriate to acknowledge that taxes will go up," he said. "They're going to go up significantly for the wealthy. And for virtually everybody, the tax increase they pay will be substantially less — substantially less than what they were paying for premiums and out-of-pocket expenses."

Where the $20.5 trillion comes from

Employers are one of the main sources of revenue in this proposal. Warren says she would raise nearly $9 trillion here, a figure that comes from the roughly $9 trillion private employers are projected to spend over the next decade on health insurance. The idea here is that instead of contributing to employees' health insurance, employers would pay virtually all of that money to the government.

In addition, she will boost her proposed 3% wealth tax on people with over a billion dollars to 6% and also boost taxes on large corporations. Altogether, she believes, taxes on the rich and on corporations would raise an estimated $6 trillion. An additional $2.3 trillion would come from improving tax enforcement.

But there are lingering questions about how much revenue some of these taxes would bring in or how easy it would be to impose a wealth tax in particular.

"Something like half of the wealth of the wealthiest people in America are held in privately held corporations, privately held businesses," said Howard Gleckman, senior fellow at the Urban-Brookings Tax Policy Center. "And it's really hard to value those assets for tax purposes."

While Medicare for All is Sanders' plan, his bill does not include set methods to pay for the plan. Rather, Sanders has included "options" to pay for his health care plan. In a recent interview with CNBC, he said "we'll have that debate" over how exactly to finance the plan.

As the candidate with "a plan for that," as one of her slogans goes, Warren has been asked repeatedly whether her health care overhaul plan would raise taxes on the middle class. Warren repeatedly said in response that she would not raise costs for the middle class.

This proposal gives Warren an answer for the next time she is asked how she would pay for Medicare for All, and it means she can say that she wouldn't impose new taxes on middle-class Americans.

But it also gives her opponents potential new fodder for attacks. Former Vice President Joe Biden has already come out swinging, accusing Warren of fuzzy math. In addition, his team argues that that nearly $9 trillion that employers would pay the government would ultimately hurt workers.

"To accomplish this sleight of hand, her proposal dramatically understates its cost, overstates its savings, inflates the revenue, and pretends that an employer payroll tax increase is something else," said Biden deputy campaign manager Kate Bedingfield in a statement released Friday.