Accessibility links
Southern California Utility Says Wildfire Started Near A Re-Energized Power Line About 10,800 residents are under evacuation orders because of the Maria Fire, one of two wildfires threatening Ventura County. Farther north, the Kincade Fire is 70% contained. 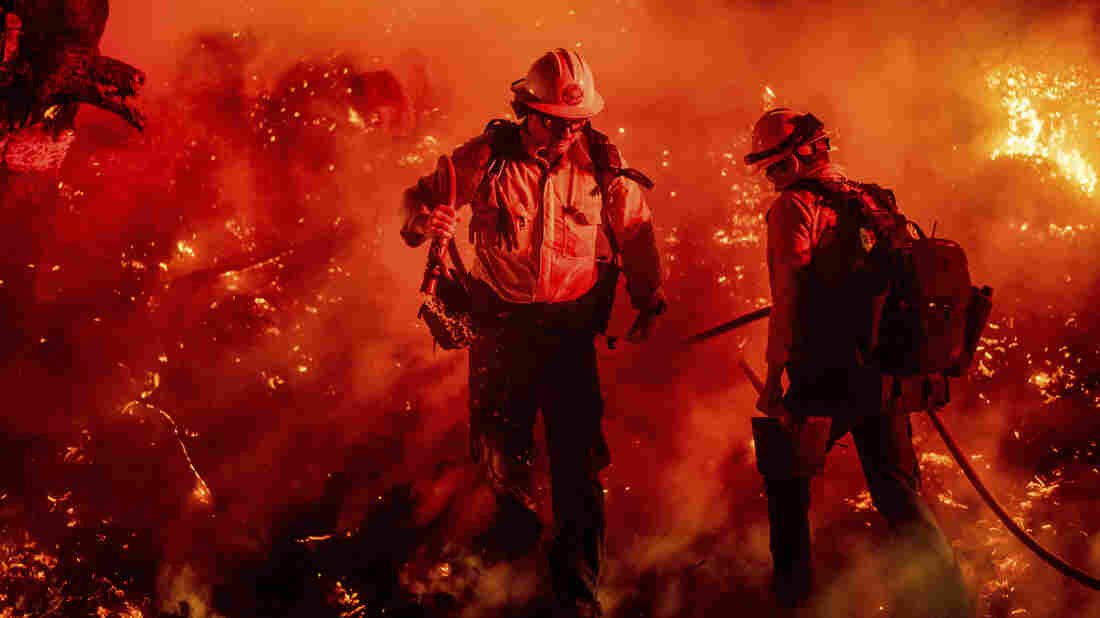 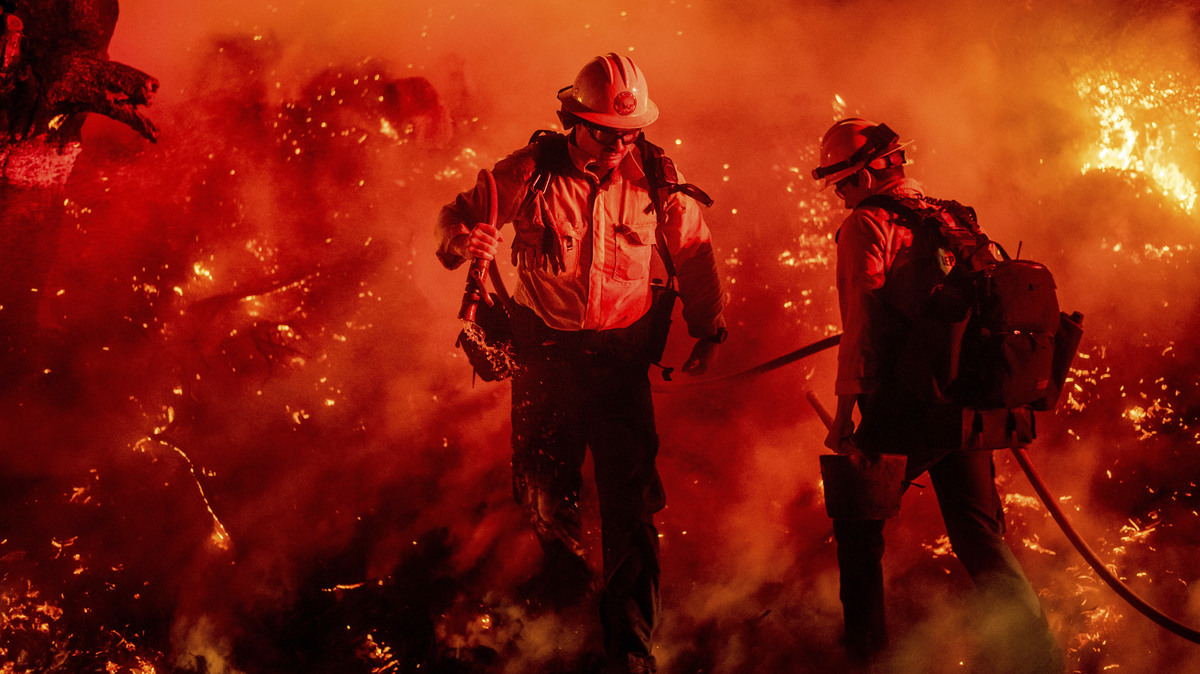 A Southern California utility said late Friday that minutes after it had restored electricity to a power line that had been shut off to prevent a wildfire, another blaze erupted nearby Thursday night in an area northwest of Los Angeles.

Southern California Edison said that 13 minutes before the start of the Maria Fire in Ventura County, the utility had re-energized a 16,000-volt circuit near the area of the reported location of the fire.

As of late Friday, about 10,800 people were under mandatory evacuation orders in Ventura County after a wildfire began late Thursday before quickly spreading overnight. The Maria Fire is the latest addition to California's busy 2019 fire season.

The fire started on Thursday at 6:14 p.m. local time affecting 750 acres within an hour. It spread overnight to encompass more than 8,000 acres.

In a press conference Friday evening, officials said the fire had grown to burn nearly 9,000 acres. About 1,300 firefighters are on hand.

Authorities said Friday that about 2,700 structures had been threatened by the wildfire. They gave no estimate on containment. Early efforts to contain the fire had been complicated by a civilian drone.

As California Wildfire Neared, A Family Raced To Save Their Animals

"Earlier this evening, our firefighting aerial efforts were hampered by someone flying an unmanned aerial system in the area," said Ventura County Sheriff Bill Ayub. "This created quite a dangerous situation. Not only is it illegal, but it hampers our firefighting efforts." 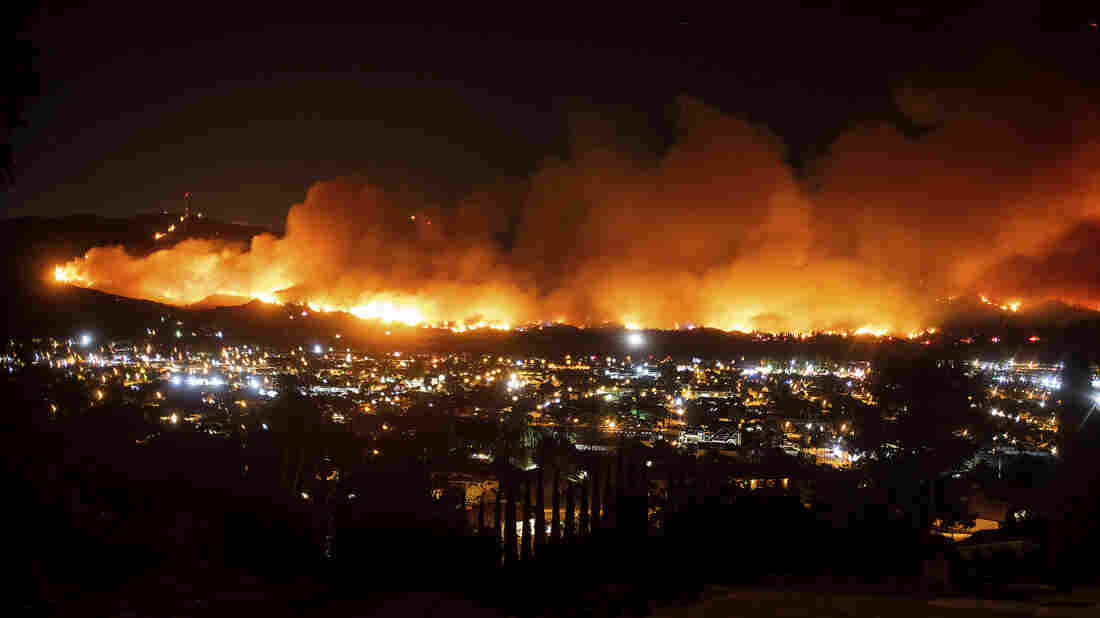 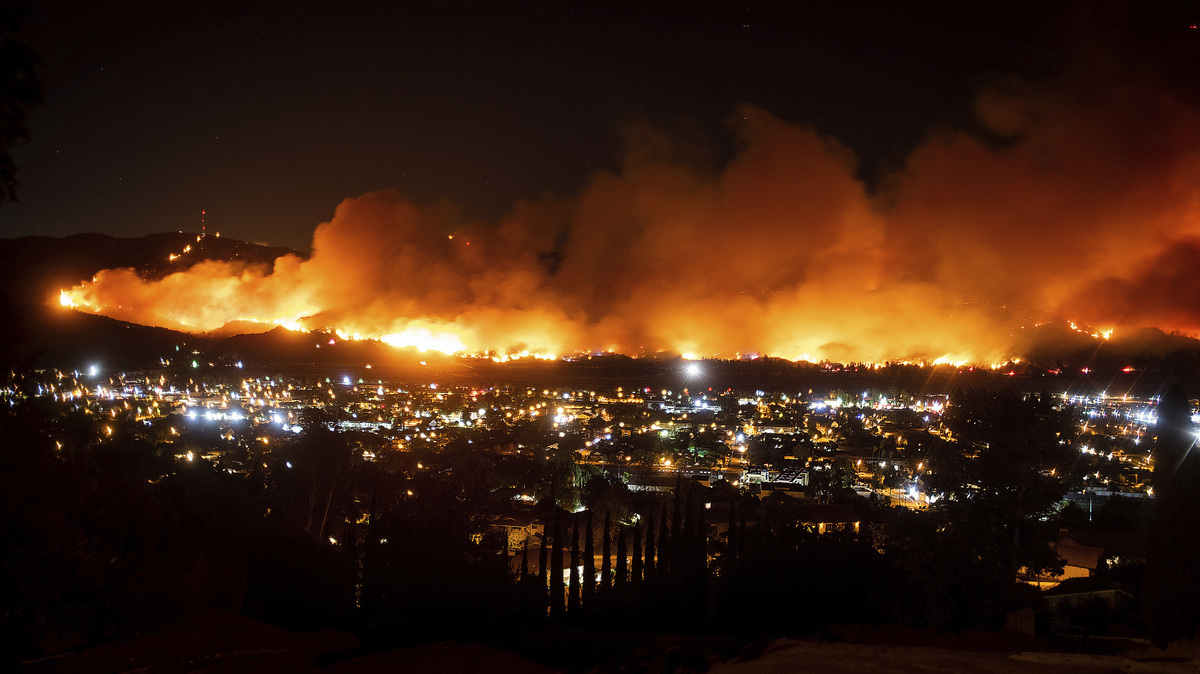 Several schools and roads have been closed as a result of the fire, member station KCLU reports. Officials said they were hopeful that the fire wouldn't grow any larger than 12,000 acres, thanks to a change in wind conditions and cooler weather.

The Maria Fire is one of two wildfires in Ventura County. The smaller Easy Fire broke out Wednesday and has burned more than 1,800 acres. The fire department says they that fire is 80% contained.

Meanwhile, hundreds of miles to the north, firefighters have 70% containment around the massive Kincade Fire, which has been active since last week and has consumed more than 77,000 acres; 352 structures have been destroyed, four people were injured, but no fatalities have been reported. Fire officials don't expect to fully contain the blaze until Nov. 7.

These are the conditions that our firefighters are currently working in. Shown here is OES 354, staffed by the Corona Fire Department, battling the quick moving Kincade Fire in Sonoma County. #kincadefire #oes #coronafire #sonomacounty pic.twitter.com/Hz85JJNEN3

The last half of October saw several destructive fires break out across California, forcing thousands of residents to evacuate their homes. Smoke has caused large cities, such as San Francisco and Los Angeles, to issue hazardous air quality alerts.

To prevent the spread of more wildfires, the utility company Pacific Gas & Electric shut off power to customers in Northern California, affecting more than 1.8 million people. Newsom criticized the utility giant for mismanaging the blackouts and for its role in previous California wildfires.

"We've had a decade-plus of mismanagement of our largest investor-owned utility, PG&E — greed and complete dismissal of public safety," Newsom told NPR earlier this week. "And as a consequence of that lack of investment, they've got a grid that is not modern."