Accessibility links
Edward Norton's 'Motherless Brooklyn' Is Set In Robert Moses' New York The actor stars in — and directs, and wrote the screenplay for — his adaptation of Jonathan Lethem's detective novel. But he moved it to the 1950s to mine a dark side of NYC history. 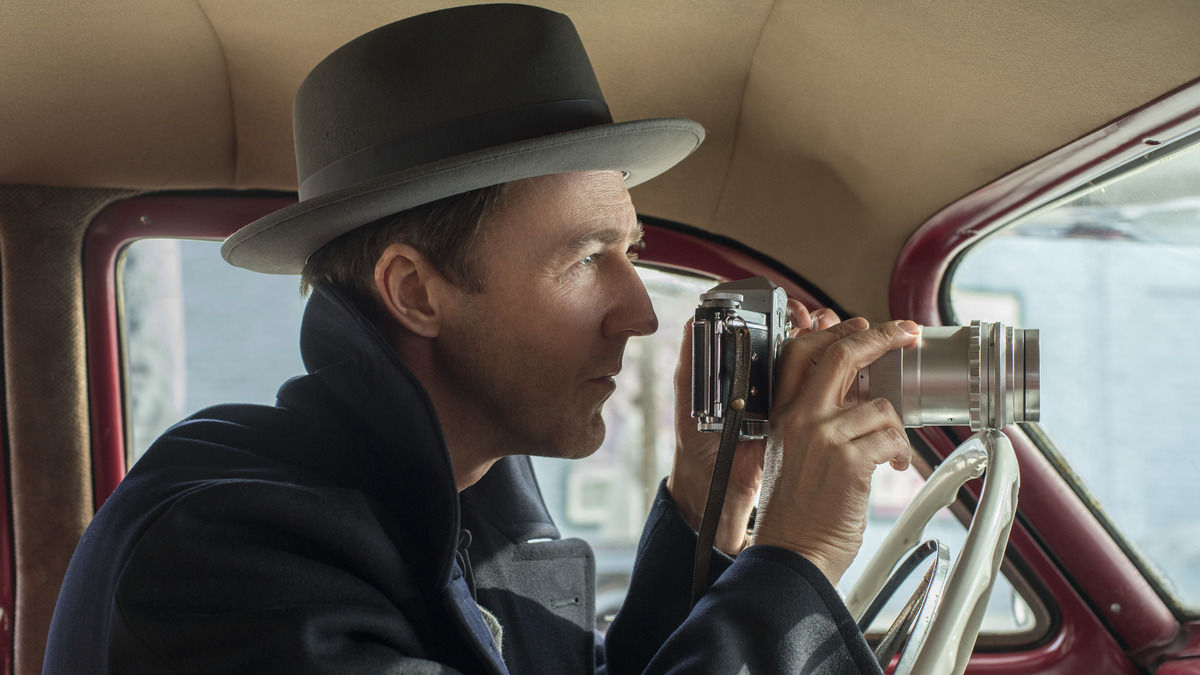 Edward Norton's new movie Motherless Brooklyn is the first he wrote, directed and stars in.

A noir detective film set in 1950s New York, the film sees Norton playing Lionel, a private eye with Tourette's syndrome. He twitches and blurts out words — as is typical of Tourette's. He's also brilliant, with an incredible memory.

Long in the making, Motherless Brooklyn is based on Jonathan Lethem's 1999 novel of the same name, set in the '90s. But Norton shifted his movie to the '50s, in part to explore a long-standing fascination with the powerful city planner Robert Moses, and the behind-the-scenes work Moses did to reshape New York City: "the dark, the shadow narrative of how modern New York really got built — the racism that was sort of baked into the city," Norton says in an interview.

"And it seemed like suddenly to me that ... if we went to the '50s, Lionel could be a really terrific vehicle for going deep into the murk of what happened in New York in that time," Norton says.

On playing a character with Tourette's syndrome in the 1950s, who refers to himself as "spastic"

Tourette's Tics Are A Challenge, But Misunderstanding Of Tics Can Be Worse

Yeah, not a word you hear today. ... In institutional settings, I think that's how they referred to people who had either palsies or things like Tourette's, where they twitched. Tourette's syndrome ... many dimensions of it are fascinating; the whole thing is fascinating. It's not a mental illness at all; it's a neurological disorder. Lionel does not have a mental disorder. He's not limited ... he's brilliant and sensitive and actually, in his own way, a street-hardened Brooklyn tough guy of an era when people weren't taking care of each other — when American values had shifted from sort of pre-war Depression-era commitment to the idea that American life was about lifting each other up, to a kind of post-war, we're-now-the-superpower obsession with strength. And what happened to the city, one could argue — it's why I thought Jonathan [Lethem's] title Motherless Brooklyn was wonderful — is: There was a lack of care. The brutal push for modernization and progress was prioritized over communities for people. And there was a lot of cost. There was a lot of pain and damage done that we're still dealing with.

Edward Norton Shares His Vision For The Music Of 'Motherless Brooklyn'

That's a composition that was [originally recorded by] Clifford Brown and Max Roach called "Blues Walk" that was a staple of that hard-bop era in the '50s, because the story takes us into this very atmospheric jazz club in north Harlem. And so we wanted to have this band, and Wynton, incredibly, assembled a group of musicians — really great musicians, veterans like Joe Farnsworth on the drums.

Interestingly, I had a whole chapter of, in my college life, of — you know, my "go-to" to try to create a seductive mood when I was in college was to put on Wynton Marsalis, Standard Time Vol. [2]: Intimacy Calling. And it had this picture of Wynton in a hat, with his feet up, and his horn in his hand, and I had a long period where I imagined that I might be perceived that way if I turned the lights down low enough. So ... I told him when I met him, I said, "You know, you were my 'go-to,' and you never came through for me, not once. You are not the closer." ... Now he's paid off his debt by doing this film with me.

Biographer Robert Caro On Fame, Power And 'Working' To Uncover The Truth

Yeah. Yeah, it's actually documented, in not only Robert Caro's book about Robert Moses called The Power Broker, but I think it's referenced in the [Ric] Burns [documentary] series New York. You know, the assumption was that minorities didn't own as many cars, and that when the new parkways were built to these grand public beaches to help people escape the rat race and inspire the mind, right — there was all this language that made people go, "Wow, these are great gifts to the public, brought by selfless public servants" — but then with great intention, they limited the access to those public assets.

On if the Robert Moses surrogate character was channeling Donald Trump

No. I think, fairly emphatically, no, in the sense that I finished writing this in 2012. ... Donald Trump was a game-show host. I would say President Trump is a game-show host also — it's just a more damaging game that he's playing. ...

The thing is that the character that Alec [Baldwin] plays is a genius. He masks his power to the degree that everybody thinks he's the parks commissioner. I was much less interested in what I would call clownish Mussolini-like autocracy, and more interested in the idea that the much bigger danger is when people amass power that we didn't give them — and we can't see it. That actually is the way noir, at its best, tends to function — as a mechanism for saying: We're going to look at what's going on in the shadows under American life. When we're not looking at what's going on, we're in real, real danger.

Lauren Hodges and Mallory Yu produced and edited this interview for broadcast. Patrick Jarenwattananon adapted it for the Web.