Accessibility links
Most California Fires Over 70% Contained As Ventura Firefighters Contend With Dr Two separate instances of drone flights over the Maria Fire in Ventura County have grounded water-dropping helicopters attempting to fight the aggressive fire that began Thursday night. 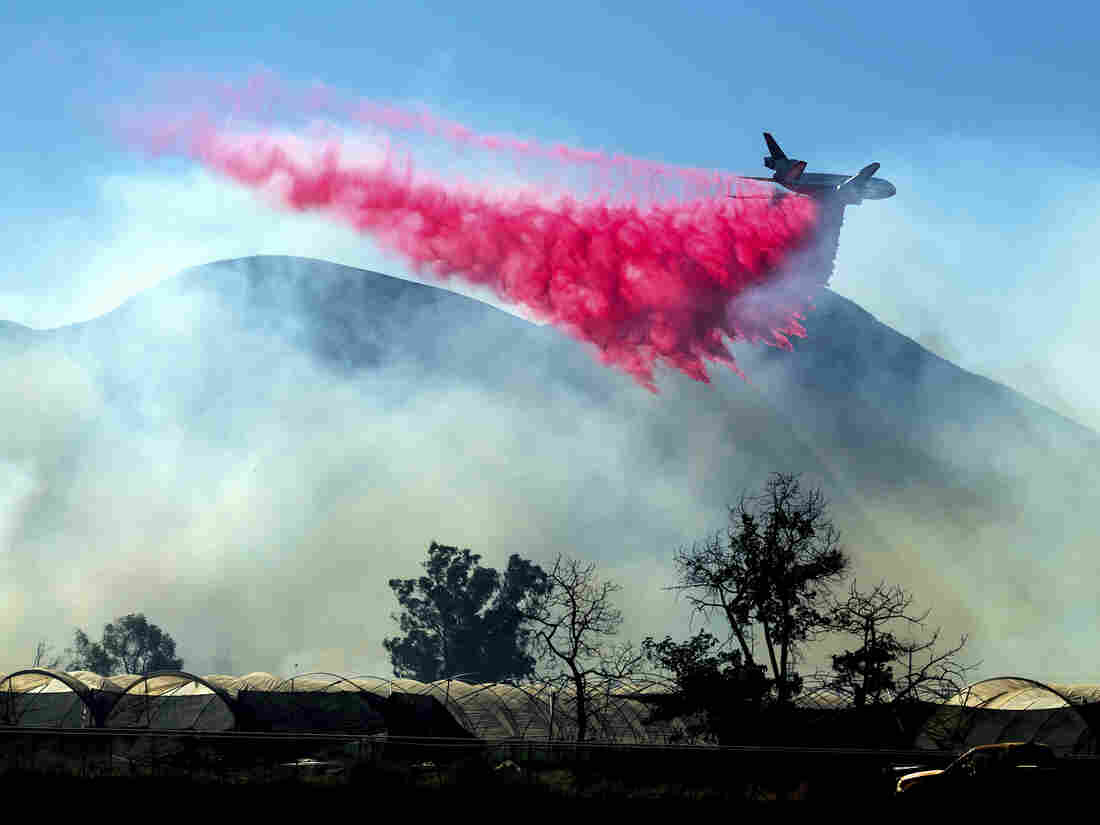 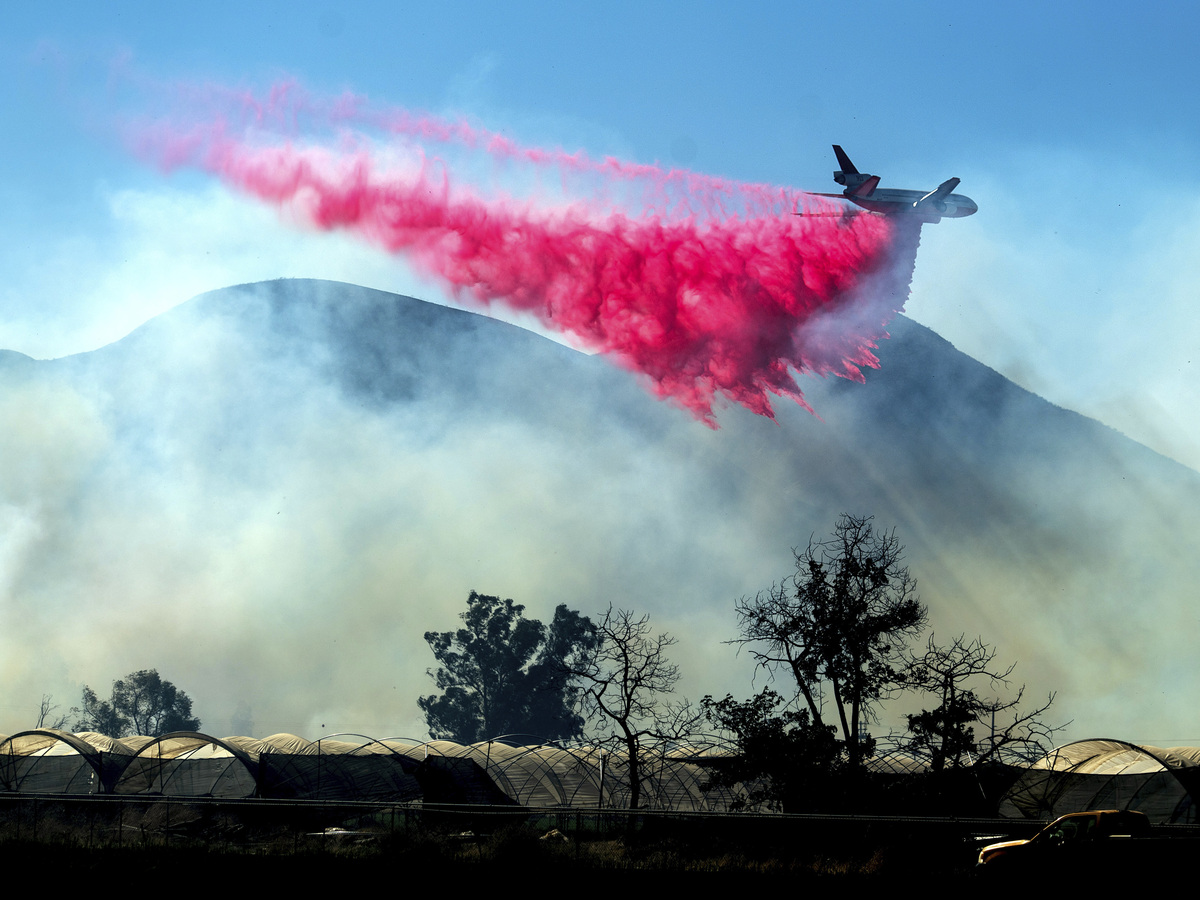 Firefighters continue to combat a fire northwest of Los Angeles, as most fires that ravaged California over the past two weeks are now more than 70% contained, according to the California Department of Forestry and Fire Protection. But reports of drones in airspace that is being used by first responders have slowed the response.

The outbreak of the Maria Fire on Thursday night added a new chapter in the state's ongoing struggles with destructive wind-whipped blazes, widespread evacuation orders and discontent over power shut-offs by Pacific Gas & Electric. The situation has forced Gov. Gavin Newsom to expand the state of emergency in Sonoma and Los Angeles counties to the entire state.

The Maria Fire, near the cities of Ventura and Oxnard outside of Los Angeles, is only 20% contained after erupting on top of South Mountain and burning over 9,000 acres. Cal Fire has joined command with the Ventura County Fire Department and the county sheriff's office to fight the fires. The state has also secured a federal grant from the Federal Emergency Management Agency to assist the agencies, Newsom announced Friday.

The utility company Southern California Edison said it had reenergized a power line near the area of the reported location of the fire 13 minutes before it started.

"The helicopters had to set down for 30 to 40 minutes each time," DesForges said. "The drones are difficult to see and they can be pushed by winds very easily. If they strike one of our helicopters, they could cause it to crash, and if not, we would still need to land that helicopter to perform repairs."

Evacuation orders are still in effect for much of the affected area. Power is shut off to 180 Southern California Edison customers in Ventura County, and seven school districts in the area are closed. The National Weather Service has extended a red flag warning through 6 p.m. on Saturday for the areas in and around the Maria Fire, meaning weather conditions in the valleys and mountains of Ventura and Los Angeles Counties are still ripe for another dangerous fire.

Despite the warning, DesForges said the efforts to contain the Maria Fire were proceeding smoothly.

"We're getting good progress. We're definitely taking advantage of that before another weather system hits." 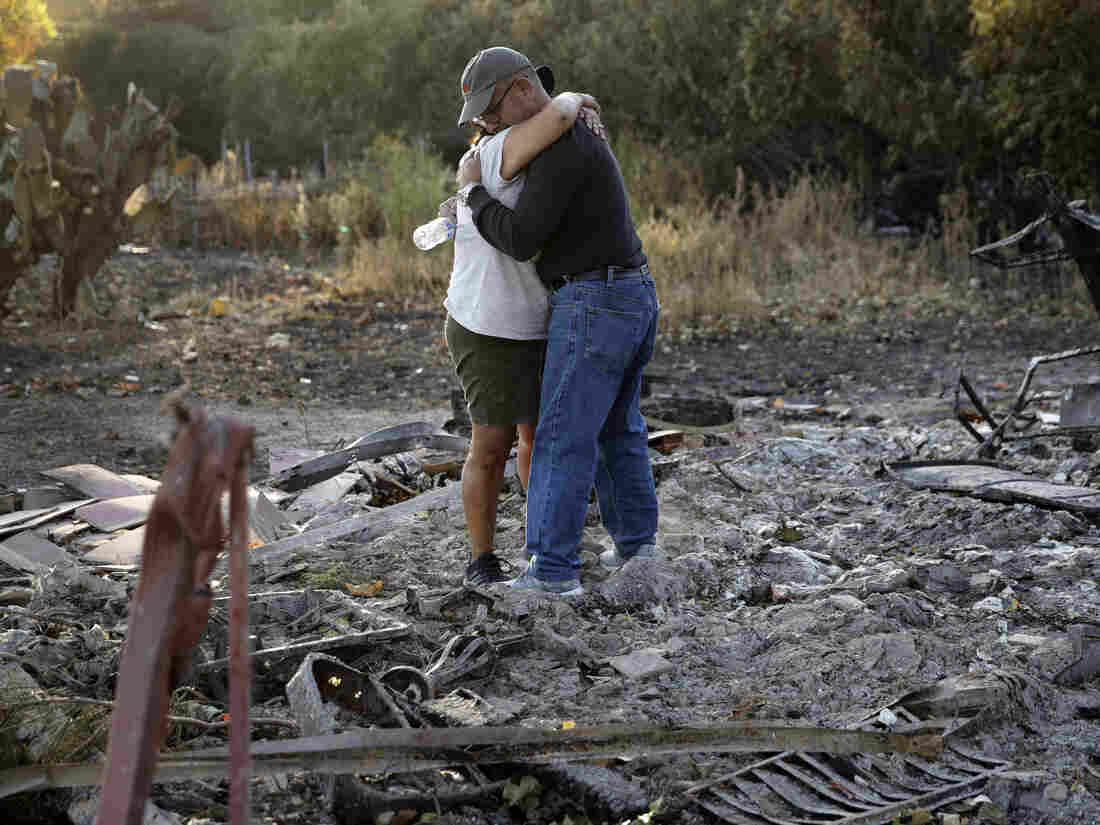 Justo and Bernadette Laos hug while looking through the charred remains of the home they rented that was destroyed by the Kincade Fire near Geyserville, Calif. Charlie Riedel/AP hide caption 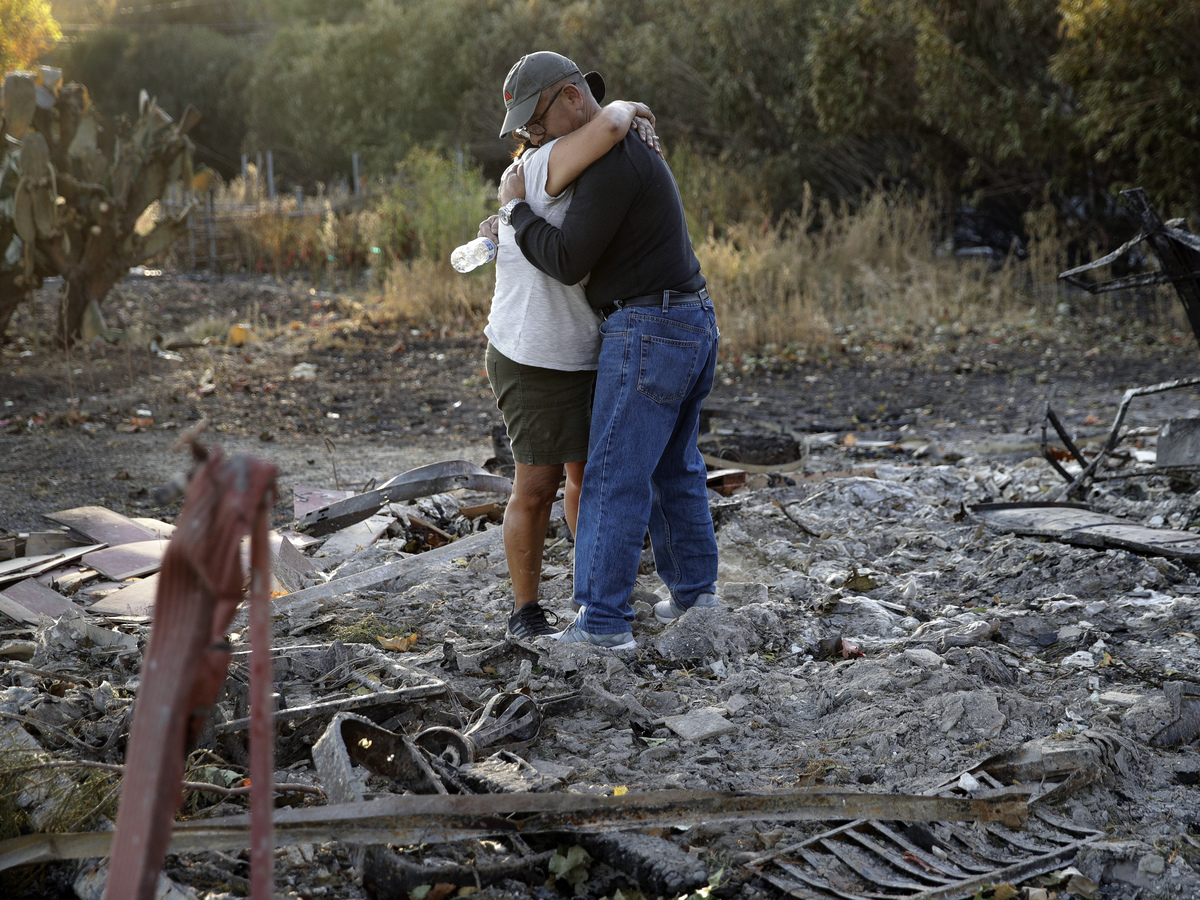 Justo and Bernadette Laos hug while looking through the charred remains of the home they rented that was destroyed by the Kincade Fire near Geyserville, Calif.

In Northern California, the Kincade Fire, the largest fire of the current active incidents, is now 72% contained after burning through more than 77,000 acres over 10 days. On Oct. 24, PG&E reported that one of its transmission towers may have been the source of the fire. A windstorm that began Tuesday evening fueled the blaze, expanding its perimeter. The fire has destroyed at least 360 structures and injured four first responders west of Sacramento.

"It was a wind-driven episode," Scott McLean, Cal Fire information officer, said. "We watched the weather very religiously, so we'll staff up the areas that are predicted to be affected. We brought in extra aircraft and moved fire equipment from other parts of the state that were not affected by these fires."

"The weather is definitely cooperating, and it sounds like it'll be that way for the next week, at least," McLean said.

McLean said there had been rumors of drones above the Kincade Fire, as well.

"Our aircraft are coming in low, 150 to 200 feet off the ground, and you're having them fly through mountainous topography, not a simple straight line," McLean said. "One, you have no time to react, and two, you have no time to avoid it in any way, because what are you going to run into if you do? Whether that be a tree or a hillside, it's a very dynamic situation." McLean added that if those flying the drones are caught, his department would pursue all legal actions available against the individuals.

"It's a safety issue. If they collide with an aircraft, it could go into the windscreen or a motor or a fixed wing. It's not a game," McLean said. In 2015, the California legislature made it law that firefighters could not be held liable for destroying drones that impeded their ability to respond to an emergency.

McLean said Cal Fire is sticking to its original target of full containment of the Kincade Fire by Thursday, but added that even after the fires are contained, firefighters will have to contend with the consequences of such a devastating fire.

"We'll still have resources doing fire suppression repair and provide for any erosion situations. With the grass and the brush, their roots hold the soil together in those hilly areas, so we'll have crews for quite some time working in those areas, and others patrolling."

The other four fires in Southern California listed as active incidents are 95% or more contained, except for the Getty Fire in western Los Angeles, where the Los Angeles Fire Department is reporting 79% containment but has lifted evacuation orders.

Northern and Central California residents still face power shutoffs from PG&E. The company's preemptive blackouts have drawn harsh criticism from lawmakers and customers. PG&E, which filed for bankruptcy in January after facing potential liabilities of $30 billion in its role causing the state's 2018 wildfires, has stalled in negotiations of its bankruptcy case. Newsom threatened a state takeover of the struggling utility company if no progress is made soon, as California residents have contended with preemptive power shutoffs that have threatened lives.

"While this week showed how California is leading the world in wildfire prevention and response, PG&E presented the opposite portrait," Newsom said in a Medium post yesterday. "Long and widespread blackouts highlighted their culture of ineptitude — a behemoth that was slow to act and resistant to change."