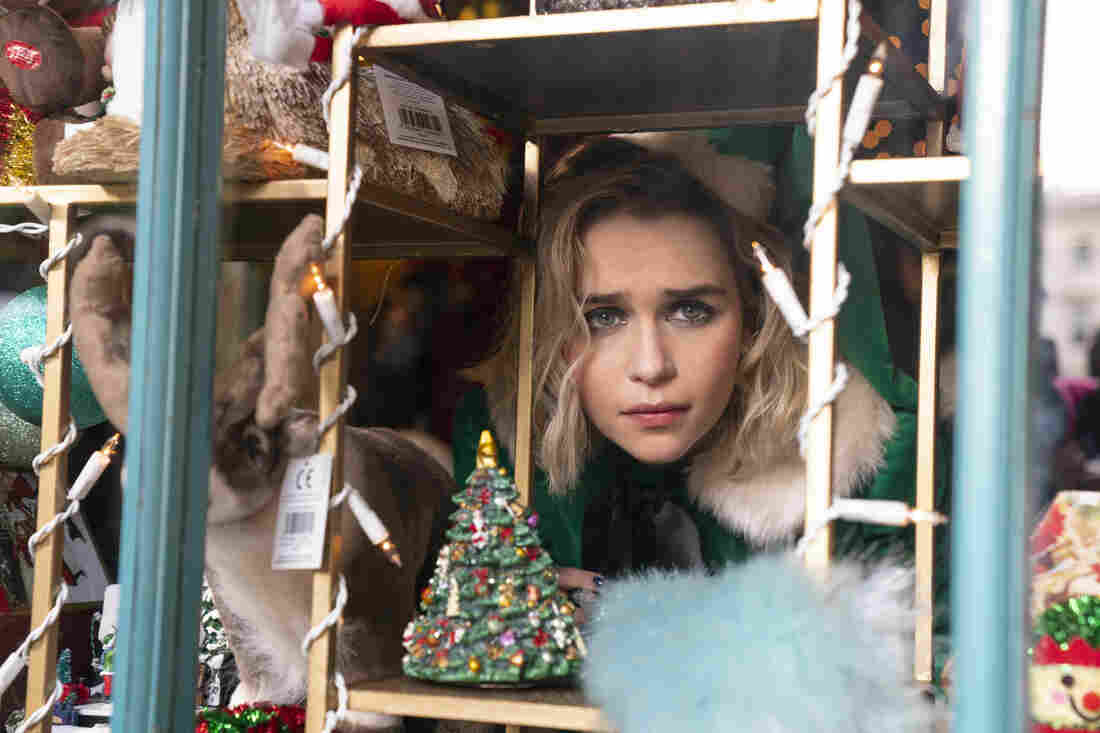 In the new romantic comedy Last Christmas, Emilia Clarke plays Kate. She dresses like an elf, she works in a year-round Christmas-ornament shop and her life is a mess.

Enter the dashing Tom, played by Henry Golding (Crazy Rich Asians). He's handsome, kind and quirky — but, of course, there is something elusive about him.

The movie is set to George Michael tunes and co-stars (and is co-written by) Emma Thompson. It takes place in a glittering, wintry London.

"We shot it last Christmas, in fact," Clarke says. "And we shot it in the middle of the night, largely speaking, because on Regent Street, if you were to do it in any other time it would be rammed with tourists. And so to do that, we had to we had to use the available light. So the only light that we could bring was soft light, and so we just brought an obscene amount of fairy lights. So the London that you see in our movie is already beautiful — and then we made it 10 times sparklier."

Clarke spoke on her character Kate, singing in the movie and what's next after Game of Thrones.

On her character, Kate

No, she's not the mother of dragons. She's got mother-of-dragon tendencies ... Yeah, so Kate — she is your anti-heroine. We're quite used to seeing, I think, in rom-coms a sort of perfect depiction of a young lady — and that ain't Kate. And it's in her flaws, is where she becomes so relatable. So she is struggling to get herself together, and she's struggling to take care of herself, she's struggling to take care of those around her, not really accepting help, kind of. You can tell she's hiding from something, and life isn't bringing her much joy when we first meet her. But she is trying.

On Kate's mom, a refugee played by "the glorious Emma Thompson" 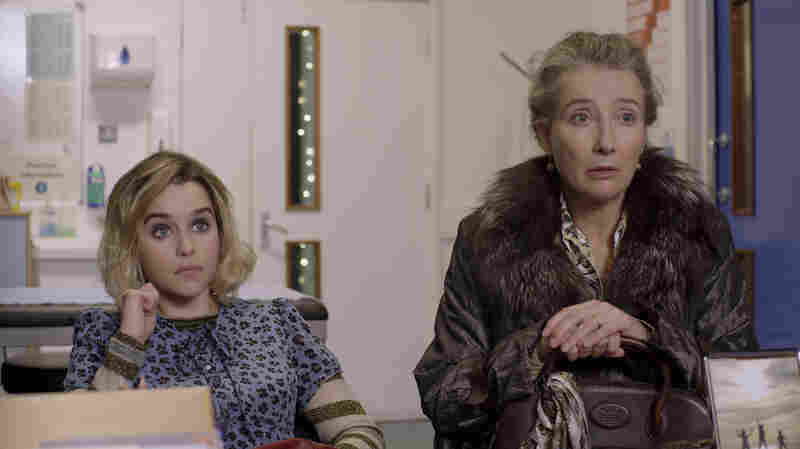 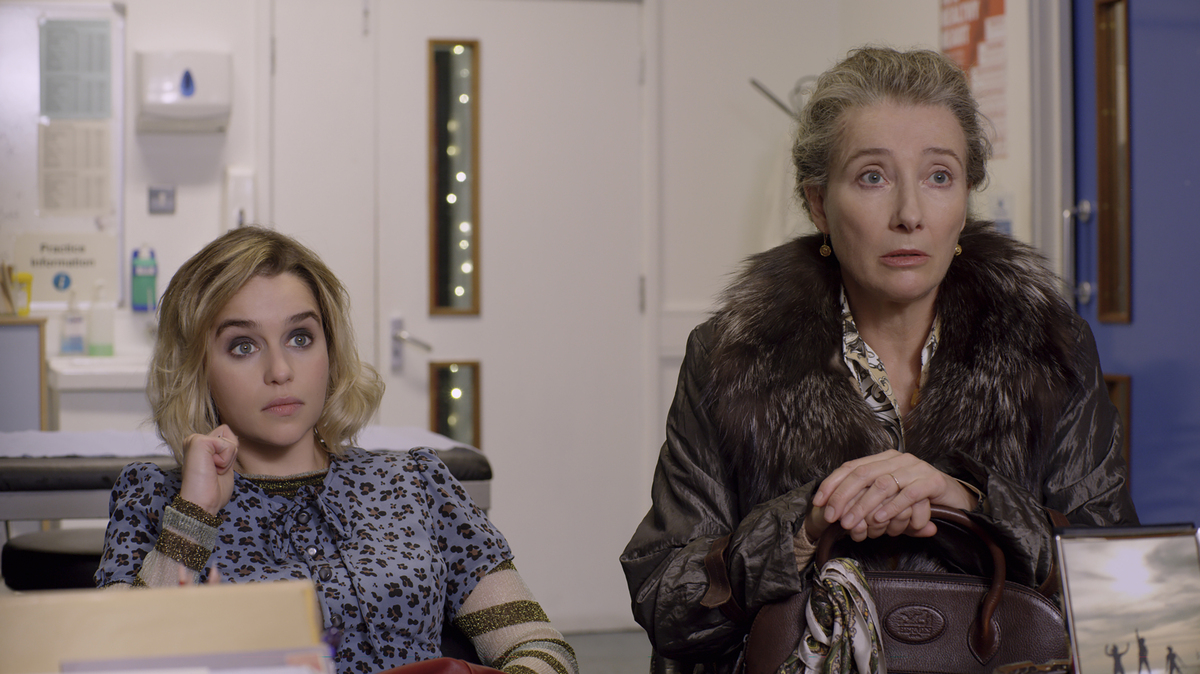 Emma co-wrote this with her husband Greg Wise, and the character that Emma plays is loosely based on Greg's mom. And she is really struggling to find peace in the United Kingdom, which they have fled to because her memories of where she had to run from — former Yugoslavia and the war that they escaped — kind of haunt her every single day, and lead her to be slightly more anxious and worried and vocal.

On singing in the movie

Oh, it was incredibly nerve-wracking, because I care so much about singing, and I'm genuinely at my happiest when I am singing. However: Doing it on camera in front of a lot of people, and doing it, you know, with George's perfect song was — every time before I sing I just think I'm getting tonsillitis, or my throat is closing up or something. So it took a lot of courage, but I got there.

On Kate's health issues and how they relate to her own, which she recently disclosed

I wouldn't say it was the defining thing that brought me to [the movie]. Dame Emma Thompson probably was that. But it definitely allowed me to bring quite a lot of truth to what Kate's struggles were, because for Kate she had her health crisis in her early 20s, and that's when I had mine too. And that time for any young person is incredibly intimidating.

On the depictions of immigrants and Brexit in the movie

Clarke: Well, we're showing a movie that is now, that is today. And I don't think that Emma or Greg could have written something about London today without mentioning it, without having it. And they're both politically outspoken, and care deeply about the refugee crisis, and care deeply about Brexit, and about inclusivity and community and the diverse multicultural thing that is London.

Garcia-Navarro: Yeah. What are your views on Brexit?

Clarke: Oh heavens, it's heartbreaking. We've just heard now that we will have a snap election, which I think is a very good thing indeed, because I think it's going to put a full stop ... maybe a comma after this very long, drawn-out situation we've been in since 2016, really. But I mean, I'm pathologically hopeful as a human being, and I'm pathologically hopeful that maybe we'll just, you know, see the error of our ways, and remain, and just stay.

On what types of roles she's seeking after Game of Thrones

So I've had the good fortune of being in this incredible show with this incredible character. And my goodness, if I were to get stereotyped as the mother of dragons, I could ask for worse. It's really quite wonderful.

But what it's left me with — after 10 years of seeing that, and being a part of that, and of doing quite big movies in my hiatuses and all of those things — is a yearning for a different sort of creative ownership. So I started my production company about three years ago — very, very quietly because I didn't want it to go wrong and have it be public knowledge — and now I've got six or seven things on my slate that I'm writing and producing. And because there is — I mean, you know, the landscape has changed for young actresses and actors for the sort of roles that are out there. I struggle to find them, because the thing that I've learned from being on 10 years in the show is that the biggest luxury in life is time and space. So I wanted to take those two things, which I have very luckily been able to have now, and really consider what my next option is. Because I care about what I'm doing with my time.

Dana Cronin and D. Parvaz produced and edited this interview for broadcast. Patrick Jarenwattananon adapted it for the Web.