Accessibility links
We Learned Why 5 States Have Big Elections In Odd Years Why do five states hold general elections in odd-numbered years, when there isn't a presidential or congressional race? Some of our political reporters in those states dug in on that question. 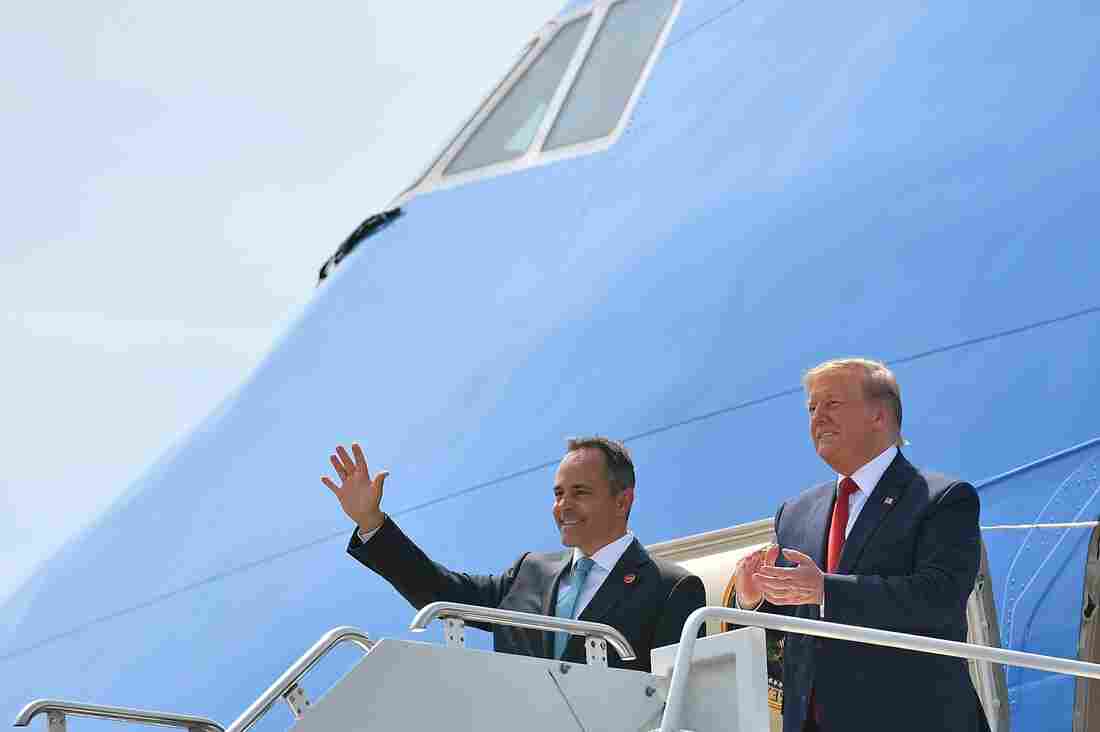 President Trump has been campaigning for Kentucky Republican Gov. Matt Bevin (left), who is on the ballot for reelection Tuesday. Above, they step off Air Force One in August at Louisville, Ky.'s airport. Mandel Ngan/AFP/Getty Images hide caption 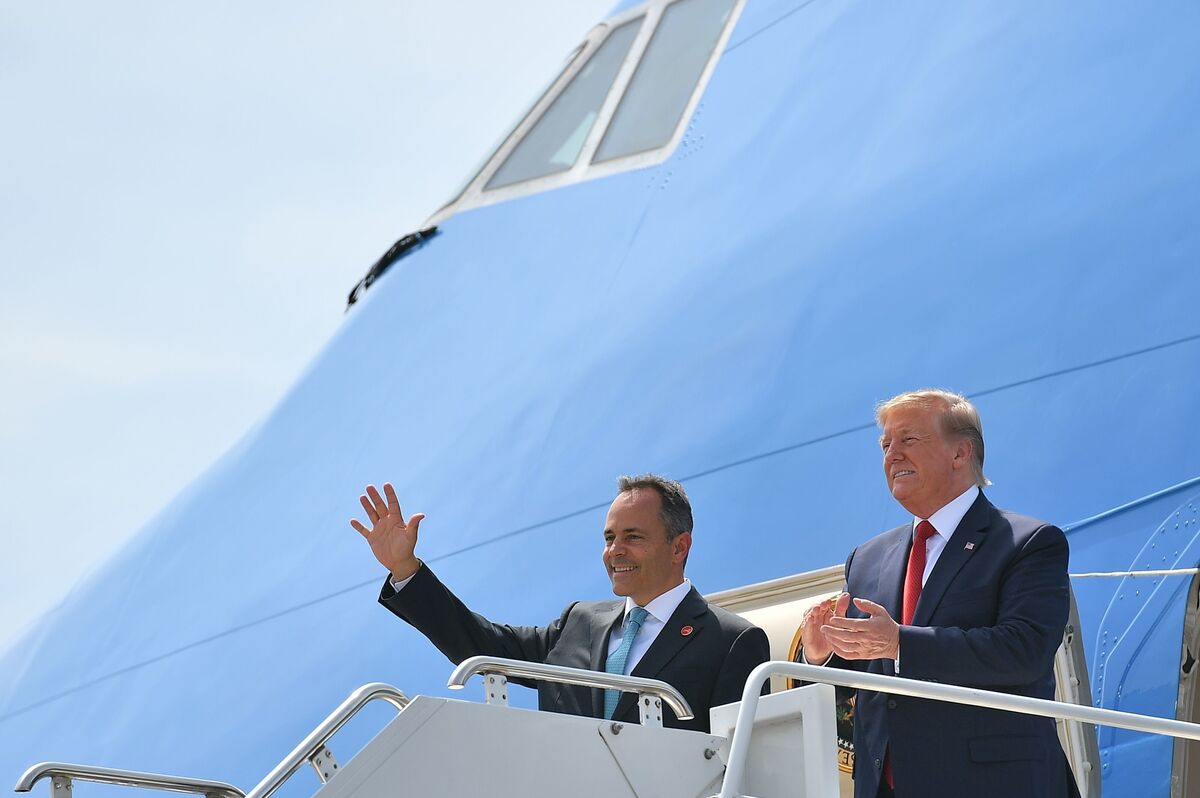 President Trump has been campaigning for Kentucky Republican Gov. Matt Bevin (left), who is on the ballot for reelection Tuesday. Above, they step off Air Force One in August at Louisville, Ky.'s airport.

If you follow politics, you're probably inundated by news of the 2020 presidential race by now. But did you know that 2019 is an election year too? This month, five states will hold big general elections.

Voters in Kentucky, Louisiana, Mississippi, New Jersey and Virginia will elect either a whole slew of state lawmakers or a governor and other statewide executives. Or, in the case of Louisiana and Mississippi, all of the above.

These races do get national attention. President Trump has been to nearly every one of the states in the past couple of months. Vice President Pence and several of the Democratic presidential contenders have held events with candidates, too.

But why do just five of the 50 states hold big general elections in years when there is no presidential or congressional election, and what does it mean for state political power and voter turnout?

We wanted to know, so some of our political reporters in those places waded into archives, combed state constitutions and spoke to political scientists to figure out why their state has bucked the trend and holds elections in odd-numbered years.

Below we'll share with you what we found, but first a quick note. We learned in our reporting that the idea that voting happens in even years on the first Tuesday after the first Monday is a relatively new one.

Before 1872 when Congress moved to standardize elections for the House of Representatives, states held congressional elections whenever — in odd years, in the spring, on Thursdays, just as a few examples.

Over time, most states aligned their elections with federal elections as a cost- and time-saving measure, said Gideon Cohn-Postar, a Ph.D. student at Northwestern University studying 19th-century U.S. history.

But a few resisted the move to even years. Others flipped the script altogether and decided to adopt an odd-year election schedule despite Congress' calendar. 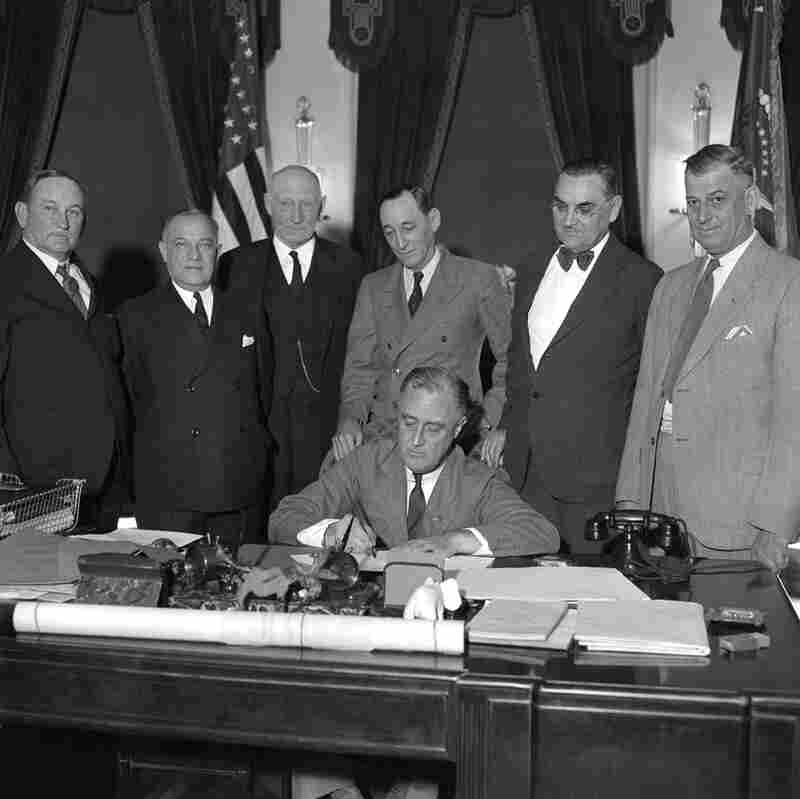 President Franklin D. Roosevelt, a Democrat, signs the National Industrial Recovery Act at the White House on June 16, 1933. After winning a fourth term, some state Republicans wanted distance from FDR on the ballot. AP hide caption 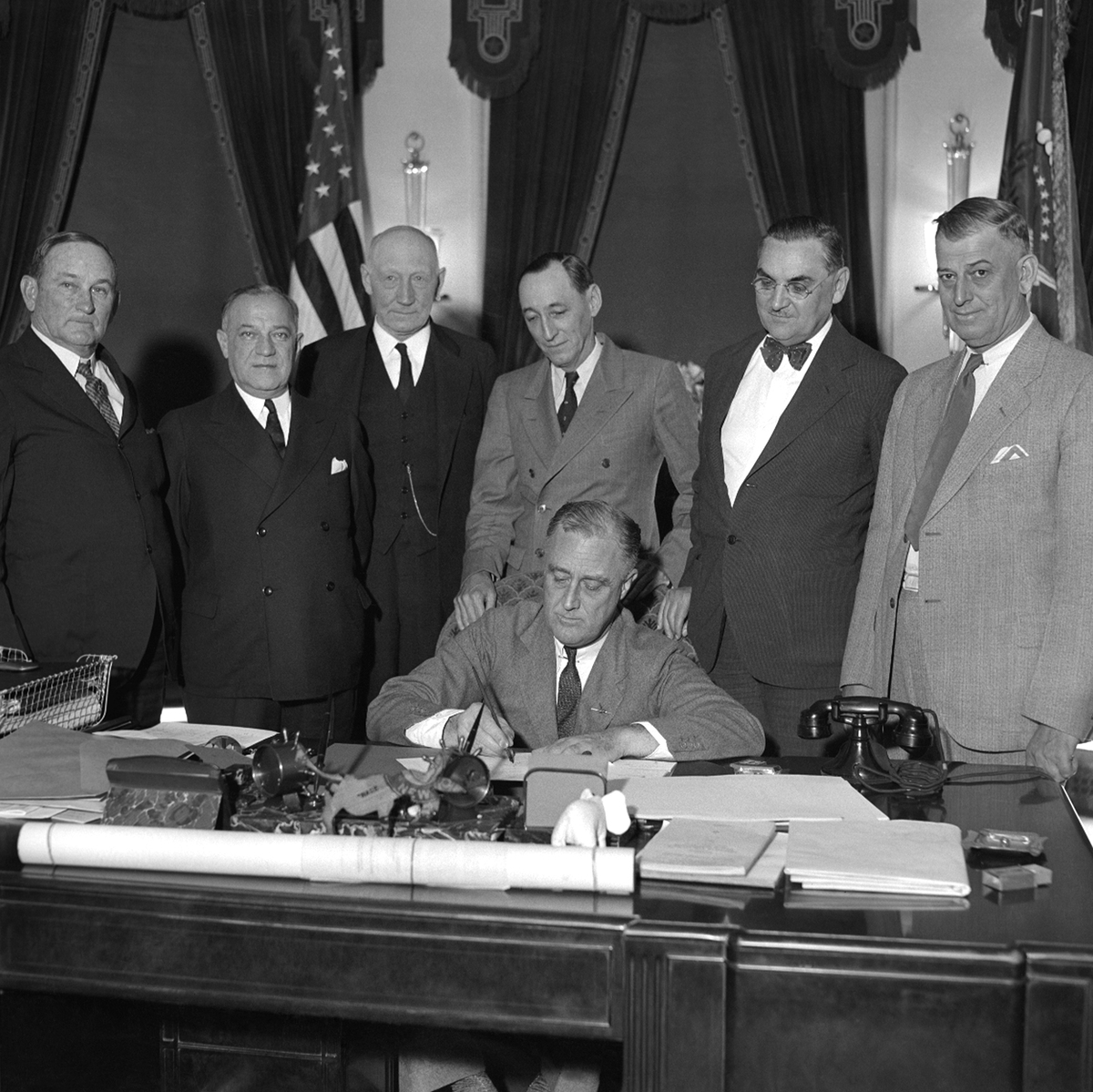 President Franklin D. Roosevelt, a Democrat, signs the National Industrial Recovery Act at the White House on June 16, 1933. After winning a fourth term, some state Republicans wanted distance from FDR on the ballot.

Mississippi has held elections in odd years for more than 200 years. It would take until 1975 for the most recent state, Louisiana, to change to an off-year voting calendar, but over that century and a half, the rationale behind each state's decision to take up odd-year elections didn't shift much at all. In the simplest terms, these states wanted to keep federal authority and influence out of their local affairs. 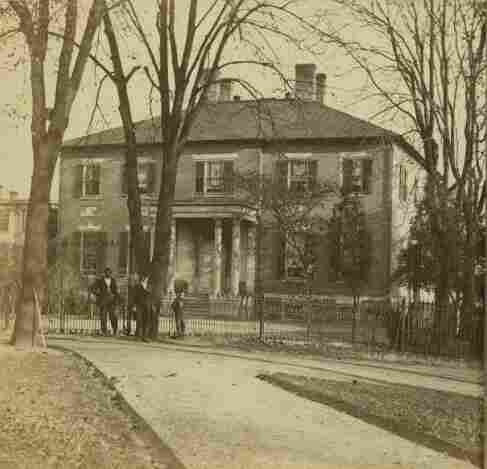 An early photograph of the governor's mansion in Richmond, Va., estimated to be taken between 1876 and 1880, about 25 years after the state constitution established odd-year elections in Virginia. Courtesy of Library of Virginia hide caption 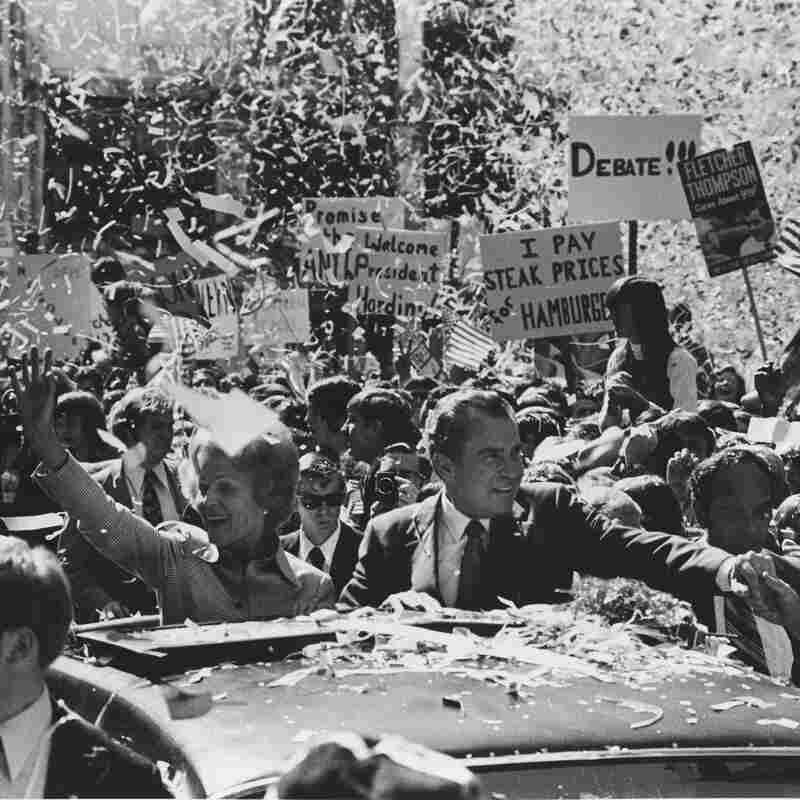 President Nixon and first lady Pat Nixon wave from their motorcade during a parade in Atlanta on Oct. 12, 1972. During his reelection campaign tour, the president met Republican leaders and candidates from nine Southern states, and Louisiana Democrats viewed him as a threat to their state power. AP hide caption 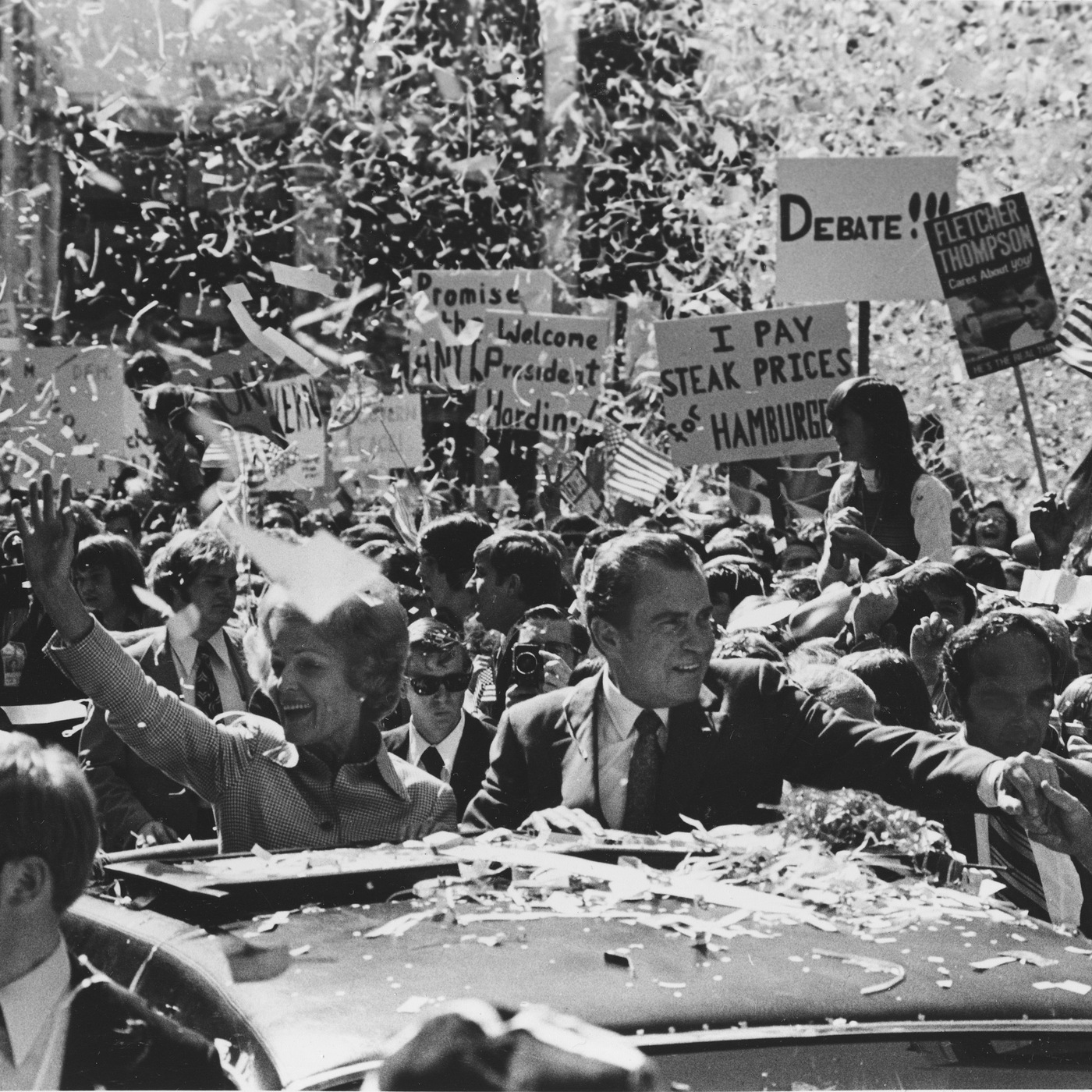 President Nixon and first lady Pat Nixon wave from their motorcade during a parade in Atlanta on Oct. 12, 1972. During his reelection campaign tour, the president met Republican leaders and candidates from nine Southern states, and Louisiana Democrats viewed him as a threat to their state power.

Running elections every single year (federal in even years, state in odd) can cost a lot more money. Most election officials couldn't nail down the exact dollar amount for us, but in Kentucky, lawmakers who want to realign the elections calendar claim that doing so would save the state and county coffers about $15.5 million every four years.

An official with the Virginia Department of Elections said the main cost is staff time. Staff members are almost always running the current election or preparing for the next imminent election.

That means making changes in how an election is run, upgrading equipment or adjusting to changes in state code all have to happen in a very tight time frame.

In New Jersey, Bob Giles, the director of the New Jersey Division of Elections, said that this kind of regularity can be beneficial too. The frequency of races means the state's 26,000 poll workers stay familiar with the Election Day process and how voting machines work.

"The same with voters. They understand that every June there is a primary, every November there's an election," Giles said. "It's just a matter of who is on the ballot."

But that doesn't necessarily translate into voter turnout. In Virginia, voters are likely to skip off-year elections, especially in years like 2019, when the focus is the legislature, not the governor.

Just 29% of Virginia voters cast their ballot in the last such election, in 2015, compared with 72% in the presidential election the following year. That means less than half the number of voters came out to vote in 2015 as did in 2016.

Does one party benefit?

Election experts have speculated that staying in an odd-year election format has benefited Democrats in Kentucky, who until recently have stayed in power in the state while voters have long voted for Republicans at the federal level.

The last time Kentucky voted to send a Democrat to the U.S. Senate was in 1992. The last time the state voted for a Democratic presidential candidate was Bill Clinton in 1996.

Meanwhile, Democrats continued to dominate state government until recently. Current Gov. Matt Bevin is only the third Republican governor of the state since World War II and is running a tough reelection campaign against the state's Democratic attorney general, Andy Beshear.

The same is true in Louisiana, where odd-year elections have allowed conservative Democrats to stay relevant as they have faded away throughout the region. Louisiana is currently the only state in the deep South with a Democratic governor. 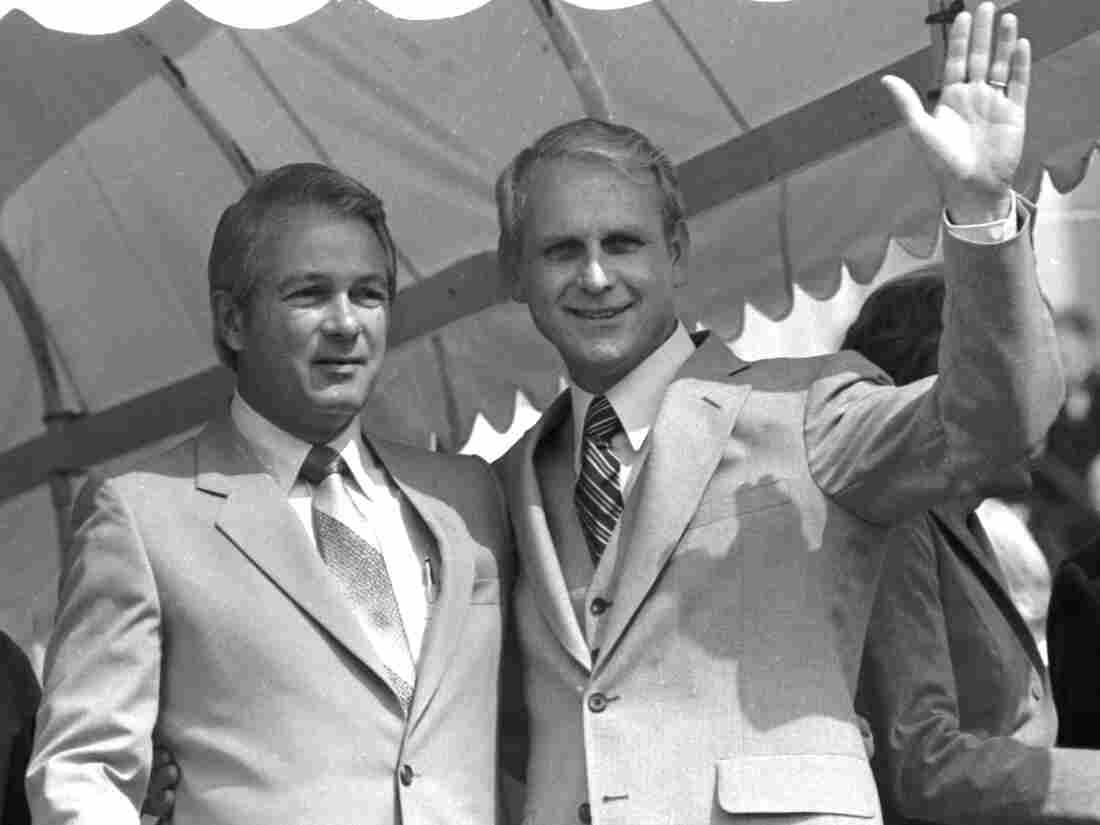 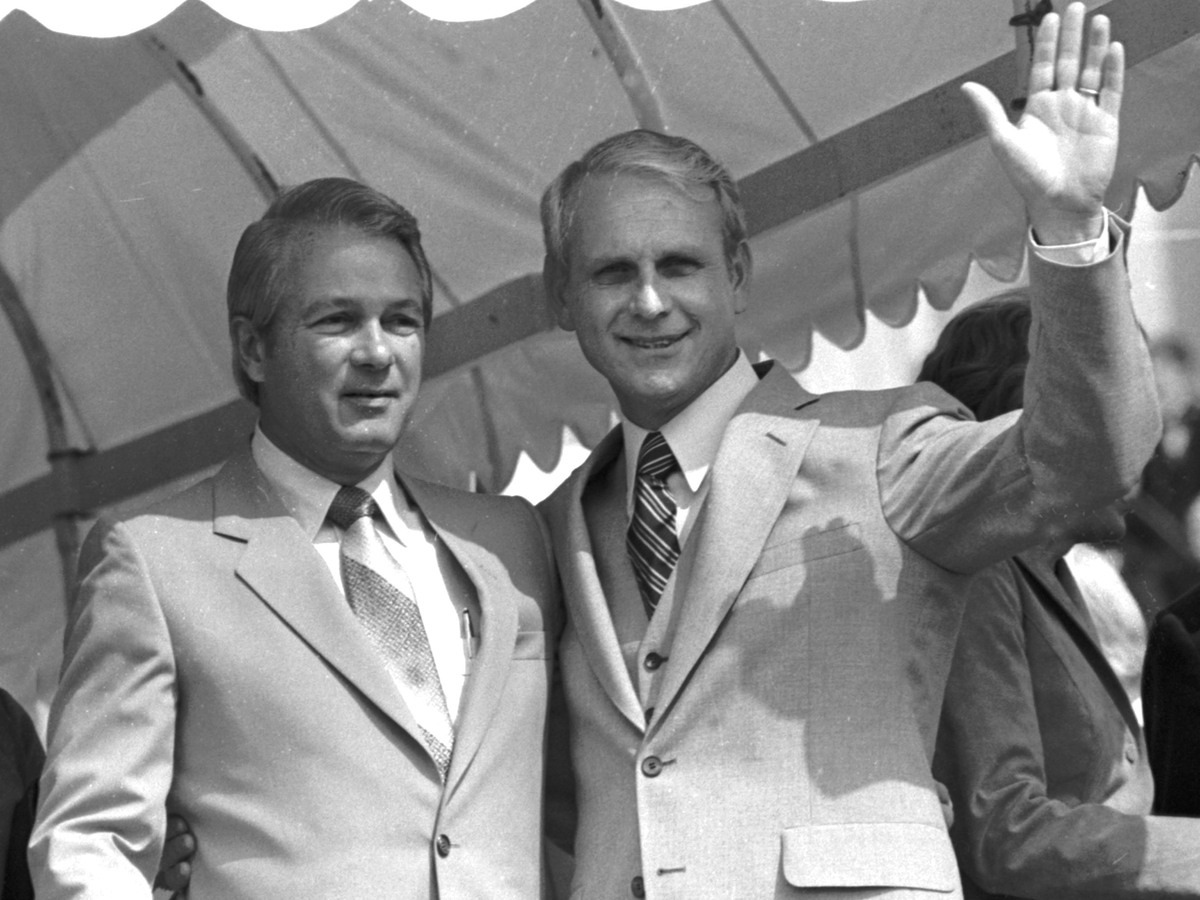 In Virginia, as the national Democratic Party tilted to the left with FDR, the state's conservative Democratic lawmakers benefited from not sharing the ticket in presidential elections.

Republican President Dwight Eisenhower easily carried Virginia in 1952 and 1956, but Republicans didn't elect a governor until 1969 with Linwood Holton. The party didn't control a chamber of the legislature until it won the state Senate in 1998 in a special election.

Today, though, political analysts broadly agree that the current schedule benefits Virginia Republicans because their base votes more reliably than blocs backing Democrats.

"The people who are most motivated in the electorate tend to be older," Larry Sabato, the director of the University of Virginia's Center for Politics, said. "They tend to be whiter, and they tend to be Republican."

Efforts to (re)align with even-year elections

There has been little appetite in changing Virginia's calendar, which would require a constitutional amendment.

A 2015 bill by Democratic Delegate Marcus Simon that would have tracked Virginia onto the federal calendar didn't even make it to the floor. Sabato said politicians in the state are unlikely to change anytime soon. "There's one thing they know for sure: They were elected under the current rules."

The conventional wisdom — often repeated in legislative circles — is that Virginia does not want to moor its ship to the federal man-of-war.

Lawmakers in Kentucky have made more room for the discussion. Several bills over the past few years have been proposed to move the gubernatorial election to even years. (One complicating factor is that one governor would serve five years, instead of four, to realign the elections.)

Opponents have called those bills a ploy to bring Kentucky's down-ballot races — which until lately favored Democrats — in line with federal elections, where the Kentucky electorate has skewed Republican in recent decades.

Joshua Douglas, an election law professor at the University of Kentucky, said the move could increase voter turnout for state elections, which have been poorly attended in recent years.

"I think [poor election turnout] is bad for democracy. Anything we can do to increase turnout is a good thing in my view," Douglas said.

According to him, moving the state contests to presidential election years might make voters more informed and less fatigued.

"My view is that if we do it all at once when people are talking about policy and political issues, then you're going to have higher turnout with a more informed political electorate as well," Douglas added. "They're not feeling like they're coming out to vote so often that it's hard to keep up."