Accessibility links
Review: 'Get A Life, Chloe Brown' Leavens Pain With Pleasure Talia Hibbert's new novel stars Chloe, who's determined to get a life after years of coping with chronic pain, and Red, the mysterious and extremely annoying (at first) super at her new building. 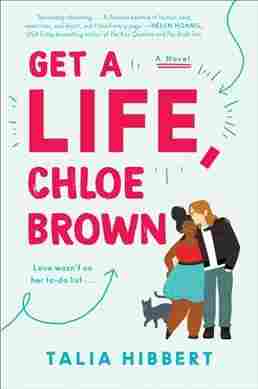 Get a Life, Chloe Brown

Talia Hibbert's Get a Life, Chloe Brown is a tour-de-force romance that tackles tough problems like insecurity and chronic pain while still delivering a laugh-out-loud love story full of poignant revelations about human nature.

Hibbert's main characters have given up on love — and she doesn't shy away from digging into their reasons. Don't be surprised at just how much you'll empathize with their angsty backstories (hilarious delivery aside, Hibbert makes almost as strong a case against love as she does for it). And don't think the answer here is that love cures pain and trouble. No, it's more like the icing on the best cake you've ever wanted to devour.

Chloe Brown is 31, and she's just had a close encounter with a speeding Range Rover, which missed her by a mere 3 feet before crashing into a coffee shop. This brush with death prompts Chloe to reassess her isolated life; she has fibromyalgia, and the associated pain, fatigue, insomnia and mood issues have her living a life devoted to little more than pain management. She's lost friends, even a fiancé — but her three sisters, her parents and an eccentric aunt have stuck by her.

However, a loving family isn't enough. After her close call, Chloe has a new plan: She's going to Get A Life. She moves out of her family home, rents an apartment and makes a list of things to experience. And she's ready to dive in — to the extent her health allows — but her new building's superintendent causes her another type of pain, like a splinter in the sole of her foot. You guessed it, this is an enemies-to-lovers story!

Redford Morgan, nicknamed Red (and yes, he's ginger), is perplexing. Not only is he annoying, rude and dismissive, he's also physically to-die-for. When he's not superintending, he's an artist who paints late at night, half-naked, showing off his physique and an array of tattoos.

And Red, too, is reassessing his life. Recently relocated from London, he's abandoned his friends and acquaintances and stepped away from a promising career as an artist to flush toilets and change lightbulbs — which he does in exchange for his lodging, while ignoring the things that caused him to flee London in the first place. Chloe is gorgeous enough to make Red reconsider his no-drooling-over-the-tenants rule. But she's also what he thinks of as a society girl — like the woman who broke his heart back home. Like many a good romance hero, he won't allow himself to be that vulnerable again.

Now, this setup may cause some readers to pause — how can Get a Life, Chloe Brown be a lighthearted, emotionally satisfying romp when the main characters are so broken, the stakes are so high and the endgame so potentially devastating? Is it possible — or even healthy — for Chloe and Red to fall hopelessly, painfully and uncompromisingly in love? Hibbert softens the story's edges with infectious banter and internal monologues that tickle the funny bone.

... when Red Morgan and Chloe Brown get into your head — good grief — there's nothing like it.

The enemies part of this enemies-to-lovers romance, which dominates the book's beginning, is so believable that the reader may start wondering why Hibbert bothered to have Chloe and Red fall for each other when they work so well as enemies. For my part, I enjoyed their squabbling and was a little disappointed when the first cracks in Chloe's I-can't-stand-Red armor began to show so soon!

At the same time, the story's relentless focus on its two leads gives us limited interaction with their respective families. And as good as the banter can be, halfway through my read it felt somewhat repetitive in spots. However, Hibbert does give us a few breaks from Chloe and Red's word warfare, introducing a handful of colorful side characters who help round out the story.

Hibbert bills herself as an author of sexy, diverse romance — and she comes through in Get a Life, Chloe Brown, giving us passion, humor and some scorching love scenes. The physical attraction between Chloe and Red sizzles, from campfires to back alleys and bedrooms, all the way through the very last pages. But what gives this story its depth is Hibbert's voice — you live each character's pain, joy, laughter, love, longing. And when Red Morgan and Chloe Brown get into your head — good grief — there's nothing like it.

Denny S. Bryce writes historical fiction and urban fantasy. Her first novel, Wild Women and the Blues, is coming in 2021. In addition to NPR, she writes for Washington Independent Review of Books and Frolic. You can follow her on Twitter @dennysbryce.