Accessibility links
Book Review: Susannah Cahalan's 'The Great Pretender' Seeks The Truth About Famous Psychiatry Study Journalist and Brain on Fire author Susannah Cahalan writes in an urgent, personal book that the '70s study by David Rosenhan had an outsized effect on psychiatry — and may have been fatally flawed. 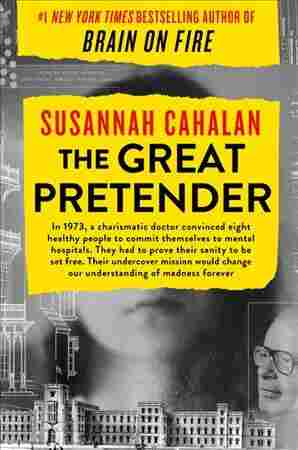 The Undercover Mission That Changed Our Understanding of Madness

In 1973, psychologist and Stanford University professor David Rosenhan published a journal article that shook the world of psychiatry to its core.

"On Being Sane in Insane Places" was the result of a study in which eight people without mental illness got themselves admitted to psychiatric institutions — Rosenhan wanted to see whether mental health professionals could actually distinguish between psychologically well people and those with mental illnesses.

They could not, Rosenhan claimed. All of the "pseudopatients" were diagnosed with illnesses like schizophrenia and bipolar disorder, and remained in the hospitals for several days. As journalist Susannah Cahalan writes in her fascinating new book, The Great Pretender, Rosenhan's study had an outsized effect on psychiatry; it was "cited to further movements as disparate as the biocentric model of mental illness, deinstitutionalization, anti-psychiatry, and the push for mental health patient rights." The study was undoubtedly influential. Unfortunately, Cahalan claims, it was also likely fatally flawed.

Cahalan's interest in the subject is intensely personal. As she recounted in her remarkable 2012 memoir, Brain on Fire, she became gravely ill as a young woman, and was admitted to a hospital where she was diagnosed with schizoaffective disorder. Eventually, a doctor realized she was suffering from anti-NMDA receptor encephalitis, a "great pretender" disease that mimics the symptoms of mental illness.

Haunted by the certainty that others with her disease were similarly misdiagnosed, and forced to languish in psychiatric institutions, she took an interest in Rosenhan's experiment — tracking down the late psychologist's notes and interviewing his surviving friends and colleagues. She recounts the origin of the study, in which Rosenhan checked himself into a mental hospital and was appalled at the treatment of patients in the institution. Upon his return, one of his students recalled, "his mood hard darkened. He seemed humbled ... He looked distressed, worn out, somewhat older than before."

Rosenhan decided to replicate his study using seven other men and women, all of whom were instructed to get themselves admitted to mental hospitals, telling the staff "that they heard voices that said, 'thud, empty, hollow.'" All of the volunteers except one reported being ignored or mistreated by staff and psychiatrists who diagnosed them quickly and without any real rigor.

Cahalan interviews two of the "pseudopatients" and realizes that their stories don't quite match Rosenhan's claims. One of the volunteers reported compassionate treatment by hospital staff, so Rosenhan decided to exclude him from the study altogether: "Harry's data ... didn't match Rosenhan's thesis that institutions are uncaring, ineffective, and even harmful places, and so they were discarded." As for the other volunteers, Cahalan finds herself unable to track them down despite dogged efforts — she concludes there's a strong possibility they didn't actually exist.

Cahalan intersperses her research into the Rosenhan experiment with fascinating, and dispiriting, history about the mistreatment of mentally ill people throughout the ages. Of the past, she writes:

"The insane weren't just neglected and ignored; they were abused and tortured ⁠— the 'otherness' of mental illness making them fair game for acts of outright sadism."

The present isn't much better, she writes, due to what many call "the criminalization of mental illness" — mentally ill Americans now find themselves in jails: "We don't even pretend the places we're putting sick people aren't hellholes."

There's also the problem that there are too few psychiatric institutions in America; as a result, those who desperately need treatment for mental illness are unable to get it. Cahalan writes that Rosenhan's study led to the closing of many mental hospitals, and gave comfort to the anti-psychiatry movement. "Had he been more measured in his treatment of the hospitals ... there's a chance a different dialogue, less extreme in its certainty, would have emerged from his study, and maybe, just maybe, we'd be in a better place today," she writes.

Cahalan is clearly passionate about the subject matter, and her outrage makes The Great Pretender an urgent, personal book. But she's also an incredibly dogged investigative reporter, tracking every lead she gets fully and with a real determination to get to the truth. Her findings are undoubtedly discouraging, but they're also undeniably important.

She's also an absolutely incredible writer. The Great Pretender reads, in parts, like a suspense novel, with the reader unable to stop turning the pages. That's not to say it's sensationalistic or lurid at all — Cahalan is a measured author, but her book is a clarion call, and she writes with a real sense of urgency and with strong, self-assured prose.

With Brain on Fire, Cahalan proved she was an uncommonly courageous journalist, and her follow-up cements her place in the ranks of the country's sharpest writers of nonfiction. The Great Pretender is an essential book, and a plea for the world to come to terms with the way we're treating some of our most vulnerable people. "We are all hanging on by a very thin thread," she writes, "and some of us won't survive our fall."