Accessibility links
Unskilled Jobs Draw Migrants, Changing Face Of Small Towns Across America A meatpacking town in the Texas Panhandle is a magnet for immigrants who will do unpopular jobs. The once majority-white county has adjusted to its more diverse population. 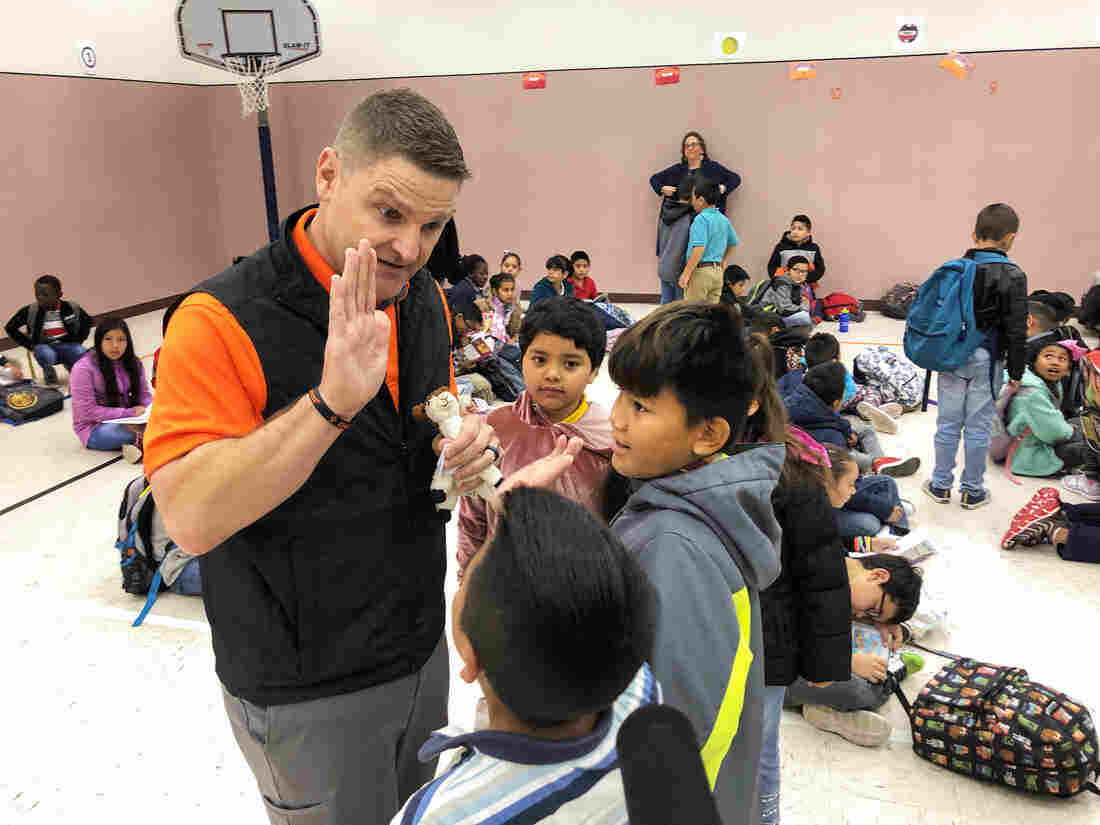 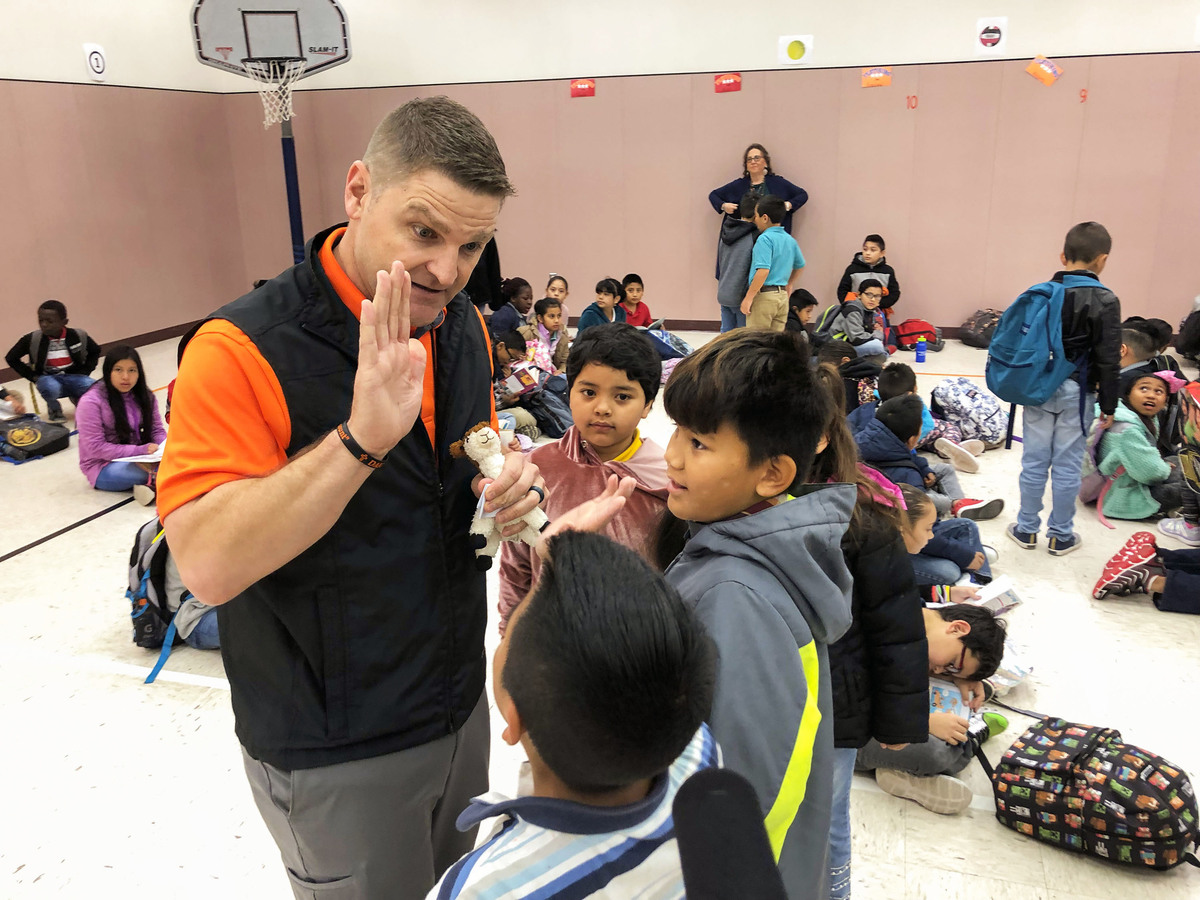 It is the 8 a.m. assembly at Cactus Elementary School, located on the bleak plains of the Texas Panhandle. Kids with colorful backpacks and sleepy eyes sit cross-legged on the gym floor while their principal kick-starts the day: "Good morning, Cactus Elementary!" The students crow in response.

Many of them come from poor villages in faraway lands — Central America, Somalia, Myanmar, Congo, Haiti — and they're clearly thrilled to be in school.

Principal T.J. Funderburg welcomes them all. "We need a world map to map where everybody comes from," he intones in the microphone. "But we're all here."

Over the past year, student enrollment at Cactus Elementary has surged from 300 to 400 children. The majority of new students are from Guatemala. They are part of a historic wave of more than half a million Central American parents and children who crossed the southern border, fleeing violence and poverty and asking for protection. After they were taken into custody and released to await their day in immigration court, many headed to the heartland where unskilled jobs are plentiful.

Cactus, Texas, is one of the places where America's newest immigrants are coming, and their presence has had a profound effect on the elementary school.

"What we found is the students that come in from Guatemala and Africa, they may have had some education," Funderburg says. "In Guatemala, they don't start first grade until 8 or 9 years old. And so we've really had to rethink the way that we do everything."

For instance, they need more English language teachers and they have fewer pop quizzes for the students who need lots of remedial help. The school also simply needs more space.

On Tuesday, voters will decide on a $107 million bond project for Dumas Independent School District, to which Cactus belongs. It includes a brand-new elementary school for Cactus, in part to accommodate all the recent immigrant children. The bond package is expected to pass.

"The elementary school is a center of pride in this community, a kind of jewel," Funderburg says proudly. 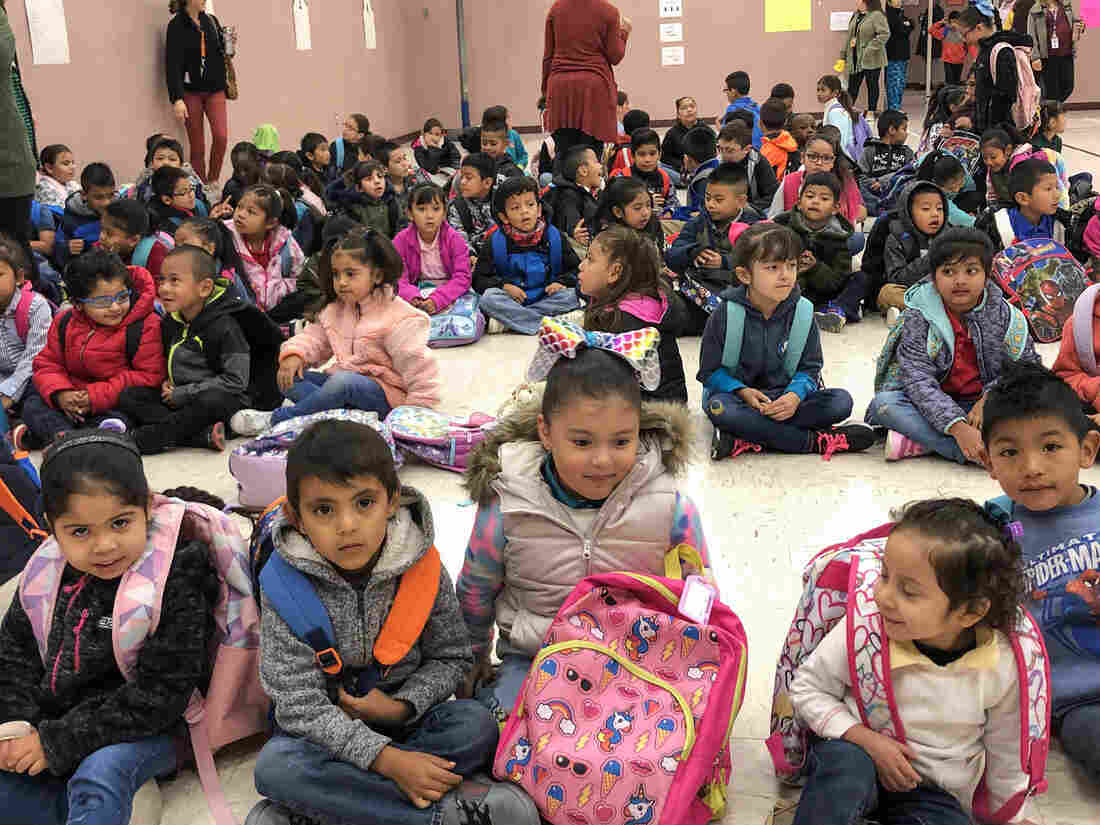 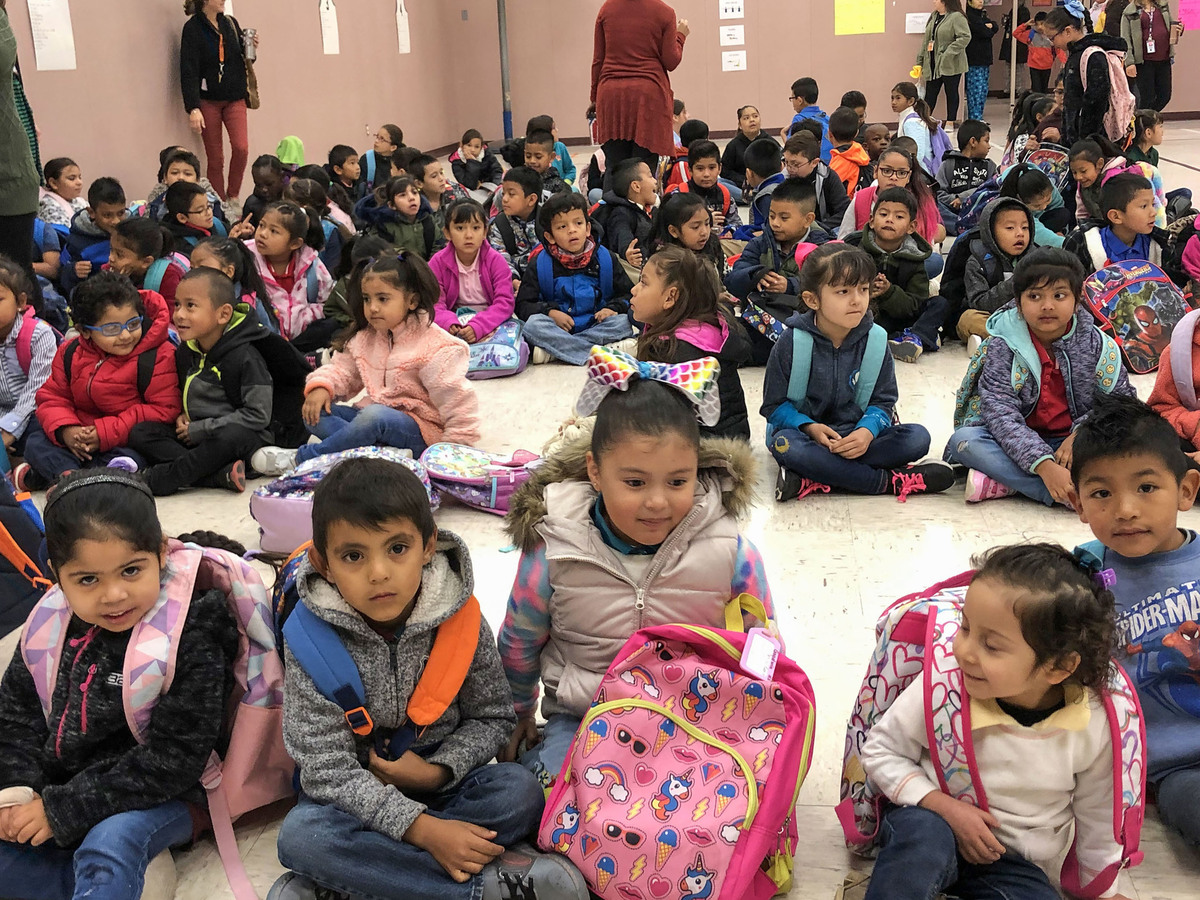 One might expect locals to oppose a tax increase to educate migrant kids born thousands of miles away. After all, this is Donald Trump country — he won Moore County by 75%. The president wants fewer low-skilled immigrants like these, who he says compete with Americans for jobs and drive down wages.

But Trump's anti-immigrant rhetoric clashes with economic reality out here in the hardworking Panhandle.

Most of the 3,200 residents of Cactus work at the massive JBS Cactus Beef Plant, located across the highway from the elementary school. It's one of the largest meat processing plants in the nation. Cattle trucks arrive all day and all night; refrigerated trailers depart carrying ribeyes, fajitas and hamburger. The 3,000-plus workforce is overwhelmingly immigrant. The town of aging mobile homes even has its own mosque and halal meat market.

The meatpacker is a magnet for immigrants because of its pay scale as well as the language classes, medical benefits and subsidized housing the company offers. And with a turnover rate of 70%, it is always hiring.

JBS also pays application fees for certain employees seeking U.S. citizenship. On this night, a handful of current and former employees have come to the nearby Cactus Nazarene Ministry Center to prep for the naturalization exam.

"Question No. 9: George Washington was a general in the Vietnam War," says a volunteer instructor. "Nope. Which war?" The students look through their papers for the correct answer.

Workers on the "kill floor" make $15-$20 an hour. The chain moves fast — a single cutter may process 100 carcasses an hour. In a single eight-hour shift, three workers will butcher 2,500 animals.

"It's hard, and it's also dangerous," says Sylvia Hernandez, a U.S. resident from Chihuahua, Mexico, who has worked at JBS for 10 years and is studying for the citizenship test. "The kill floor is covered with blood, suet, fat, water."

In 2006, Immigration and Customs Enforcement agents raided the plant, then owned by Swift & Co., and arrested 300 unauthorized workers. The plant, now owned by JBS — the Brazilian multinational meat processor — says it carefully vets applicants to ensure a legal workforce.

"Historically, first-generation Americans, asylees and refugees have viewed our jobs as unique opportunities to pursue the American dream and provide a better future for their families," JBS says in an emailed statement.

"If I'm a U.S. citizen and I speak English," Hernandez continues, "I'm not going to work there. I'll look for a better opportunity. It's the people who don't speak English who go to work at JBS."

But it's not just the beef plant that attracts immigrants to Moore County, where Cactus is located.

"There's lots of work all over, not just in the plant," says Rodrigo Gallegos, a 20-year JBS employee — "in the feedlots, the ranches, the dairies. There's all kinds of work for people who don't have papers, and for people who have papers."

The unlimited availability of work for non-English speakers who are willing to do hard jobs has changed the character of Moore County, which used to be majority white. Today, it is 80% nonwhite. Bill Knight runs the local Greyhound station and serves as the GOP chairman. While the immigrant workforce is good for selling bus tickets, he says, the fact that some foreign-born workers don't assimilate rubs some old-timers the wrong way. 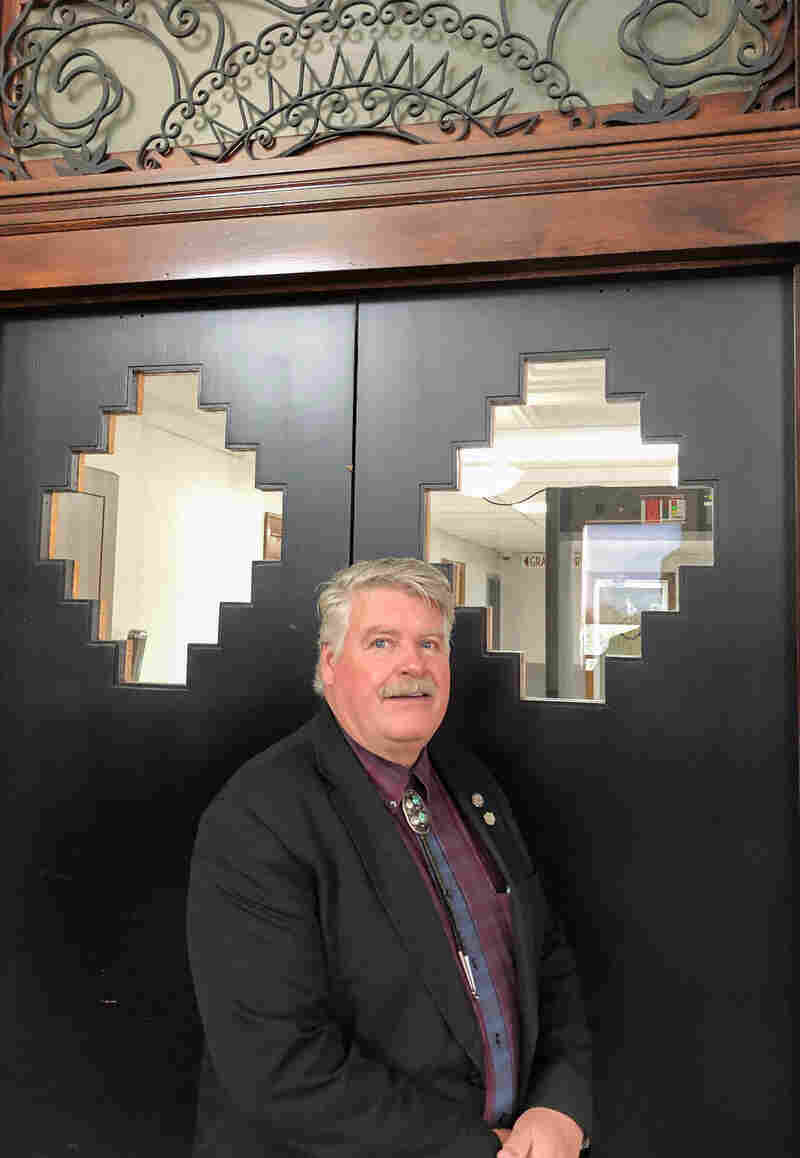 Moore County Judge Rowdy Rhoades says his county is more multicultural and tolerant than it used to be. John Burnett/NPR hide caption 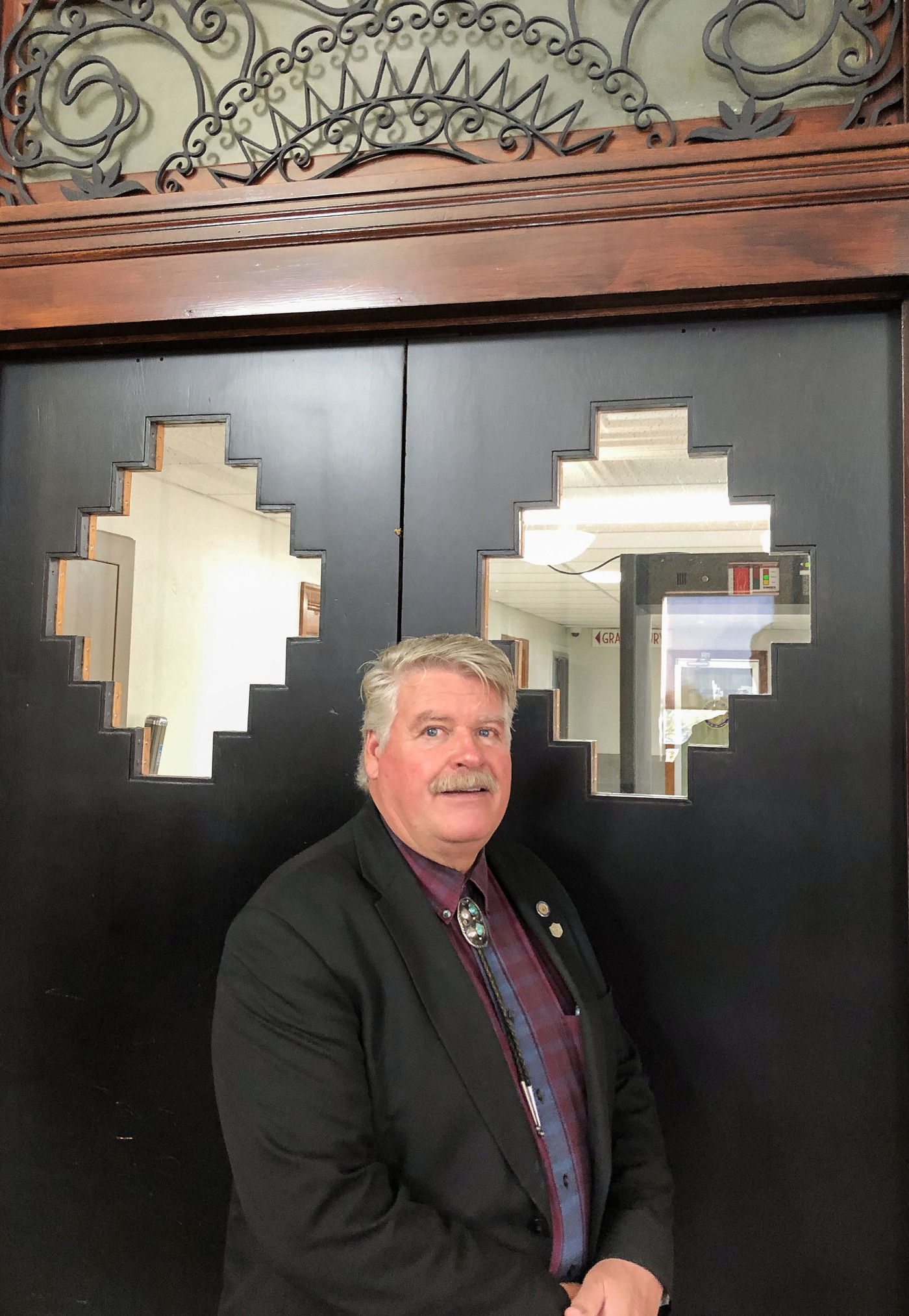 Moore County Judge Rowdy Rhoades says his county is more multicultural and tolerant than it used to be.

"The Anglo, let's say, feels like they're not welcome in those Spanish stores because [store employees] are accustomed to speaking to the Spanish in Spanish, and not speakin' to us in English," Knight says.

But Moore County Judge Rowdy Rhoades says they've come a long way from the days when the county seat of Dumas was raw and racist.

The huge beef plant has been a magnet for immigrant workers for decades, and most folks have adapted to the diverse population that is now a permanent feature of Moore County, Rhoades says.

"So our world has turned around," he says from his office inside the art deco courthouse.

"You know what, it's kinda like gettin' fat. You don't get fat all at once. You put weight on a little at a time. So you adjust, you change your clothes, you go up a size or two. You notice it, but you adapt."

After all, Rhoades says, if you like steak it's got to come from somewhere.