Accessibility links
Full Trump Impeachment Inquiry Transcripts Released For First Time Marie Yovanovitch said she found out from Ukrainian officials that President Trump's personal lawyer, Rudy Giuliani, and his associates were targeting her and wanted a different person on the job. 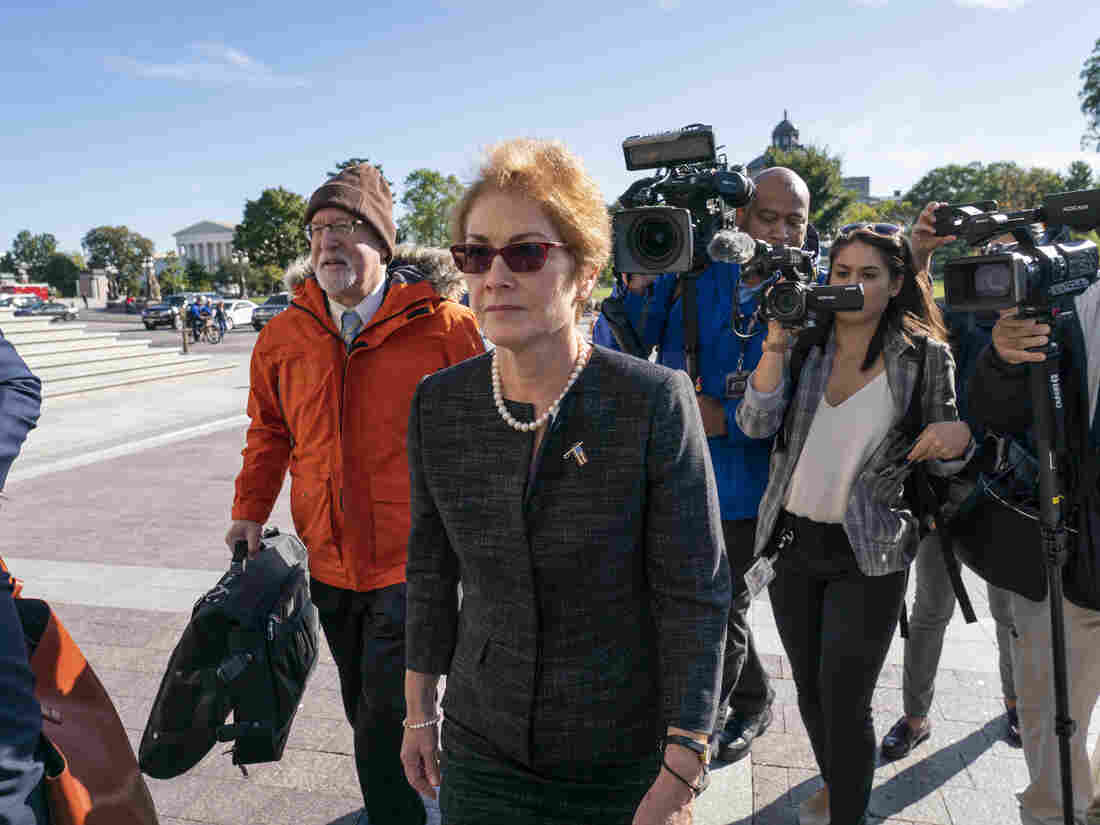 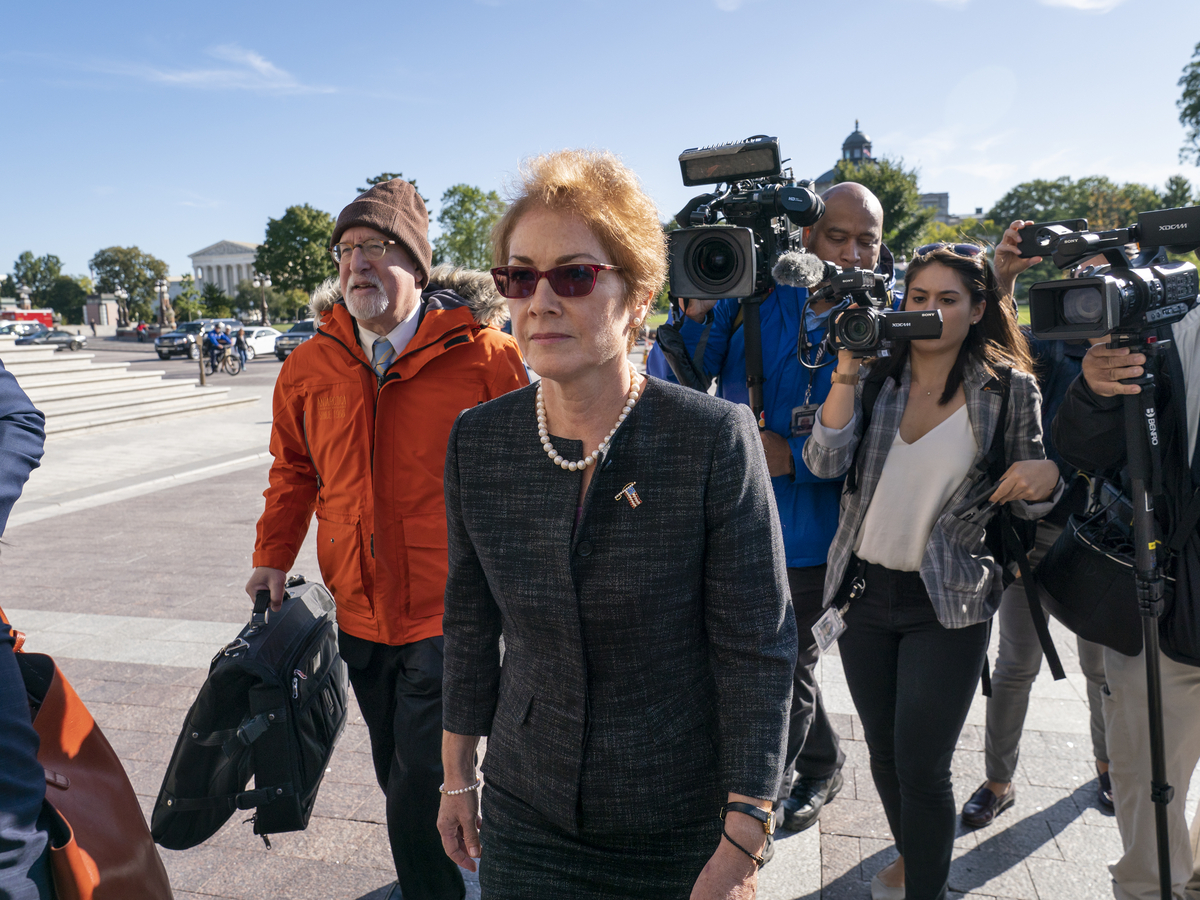 Former U.S. Ambassador to Ukraine Marie Yovanovitch testified Oct. 11 as part of the House impeachment inquiry into President Trump. The full transcript of her testimony was released Monday.

Ousted former U.S. Ambassador to Ukraine Marie Yovanovitch told congressional investigators that she was warned to "watch my back" by a senior Ukrainian official, according to the newly released transcript of Yovanovitch's closed-door deposition before Congress.

The Ukrainian official told her that Rudy Giuliani's associates, Lev Parnas and Igor Fruman, who have since been arrested on an unrelated charge, wanted a different ambassador in the post. Why?

"I guess for — because they wanted to have business dealings in Ukraine or additional business dealings," Yovanovitch told House Intelligence Committee members, which include Republicans. "I didn't understand that, because nobody at the embassy had ever met those two individuals. And, you know, one of the biggest jobs of an American ambassador of the U.S. Embassy is to promote U.S. business. So, of course, if legitimate business comes to us, you know, that's what we do — we promote U.S. business."

The Oct. 11 testimony is among the first transcripts of closed-door depositions from individuals at the center of the Ukraine affair, which has landed President Trump in an impeachment inquiry.

The transcripts, released Monday, are of the separate, hours-long depositions of Yovanovitch and Michael McKinley, a former senior adviser to Secretary of State Mike Pompeo. McKinley, a career foreign service officer, said Yovanovitch's treatment "raised alarm bells" and "had a very serious effect on morale" at the State Department, and he described "bullying tactics."

"I'm just going to state it clearly," McKinley told Congress. "As a foreign service officer, to see the impugning of somebody I know to be a serious, committed colleague in the manner that it was done raised alarm bells for me."

Yovanovitch, who has decades of diplomatic experience, was recalled as ambassador in May, and on his July phone call with Ukrainian President Volodymyr Zelenskiy, Trump referred to her as "the woman" and "bad news."

The Ukrainian official who gave Yovanovitch the heads-up of Parnas', Fruman's and Giuliani's involvement was Arsen Avakov, Ukraine's minister of internal affairs. He told Yovanovitch that he had become aware of Giuliani's pressure campaign to get Ukraine to investigate conspiracy theories about the 2016 election and former Vice President Joe Biden and his son, Hunter.

On Trump's call with Zelenskiy, the U.S. president asked for the same investigations to be undertaken as "a favor," according to a White House-released account of the call. Trump's request came right after Zelenskiy asked to buy more U.S. weapons. The U.S. also was withholding military funding that had already been allocated by Congress. Trump encouraged Zelenskiy to work on the investigations with Giuliani — the president's personal lawyer — and Attorney General William Barr. (There's no indication that Barr played any role in the affair.)

Hunter Biden served on the board of Burisma, a Ukrainian energy company, while his father was vice president and handling issues related to Ukraine. There is no evidence of wrongdoing from either Biden, but Trump and Giuliani have used the fact of Hunter Biden's serving on the board as a way to politically deflect to the Bidens.

For most of 2019, Joe Biden led national polls of the Democratic primary and led Trump in 2020 general election polling, setting him up as a principal potential contender to take on the incumbent president.

"Did the issue come up in that conversation or others about the Giuliani and his associates' interest in the Bidens and Burisma?" asked a Democratic staff counsel of Yovanovitch in the closed-door deposition.

"Yeah," Yovanovitch said. "I mean, looking backwards to what happened in the past, with a view to finding things that could be possibly damaging to a presidential run."

Yovanovitch also noted that she reported her conversation with Avakov back to the State Department, so there is a record.

"Everybody is sort of shocked," Yovanovitch said of the State Department's reaction.

The release of the transcripts is one of the first steps in the new public phase of the impeachment inquiry. Opening statements had previously been released, but these transcripts, which are hundreds of pages long, include full questions and answers with some sensitive items redacted.

Schiff promised to release more transcripts Tuesday — from former special envoy to Ukraine Kurt Volker and Ambassador to the EU Gordon Sondland. Sondland was a major Trump donor, and witnesses have contradicted parts of Sondland's testimony.

Yovanovitch detailed a campaign to oust her from her post, and when she spoke to Sondland about the campaign against her, he told her that she should tweet her praise for Trump.

"You need to, you know, tweet out there that you support the president and that all these are lies and everything else," Yovanovitch said, paraphrasing what Sondland told her. "And, you know, so, you know, I mean, obviously, that was advice. It was advice that I did not see how I could implement in my role as an ambassador and as a foreign service officer."

In the other released deposition, McKinley noted concerns about "bullying tactics" at the State Department after complaints were lodged about getting information to Congress in a timely manner. And he said he was "absolutely appalled" that the State Department was not going to provide legal financial support for people who had to go and testify before Congress.

Four administration officials defied congressional subpoenas and chose not to testify in closed-door depositions Monday despite being scheduled to do so. Schiff said those four will help build a case for an article of impeachment that includes obstruction of Congress' constitutionally mandated duties.

Schiff called all four of them "firsthand witnesses" to serious allegations of misconduct.

"We may infer that their testimony would be further incriminating for the president," Schiff argued, adding that the administration's strategy of not cooperating amounts to "delay, deny, obstruct."

Schiff also noted that transcripts from Yovanovitch and McKinley detailed the "back channel" efforts by Giuliani, which he said included "a vicious smear campaign" to remove Yovanovitch.

He declined to comment on whom the committee planned to ask to appear in public hearings.