Accessibility links
'Morning Edition' Celebrates 40th Anniversary Morning Edition debuted on Nov. 5, 1979. The newsmagazine show had a rocky beginning, including a total revamp of hosts and leadership, an internal boycott by reporters and resource challenges. 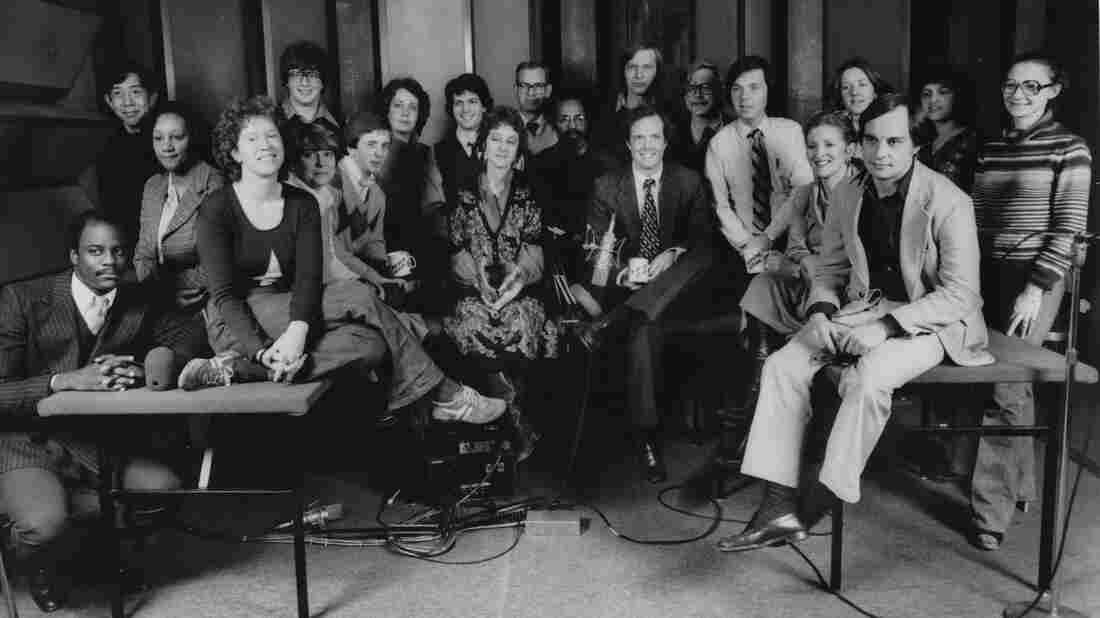 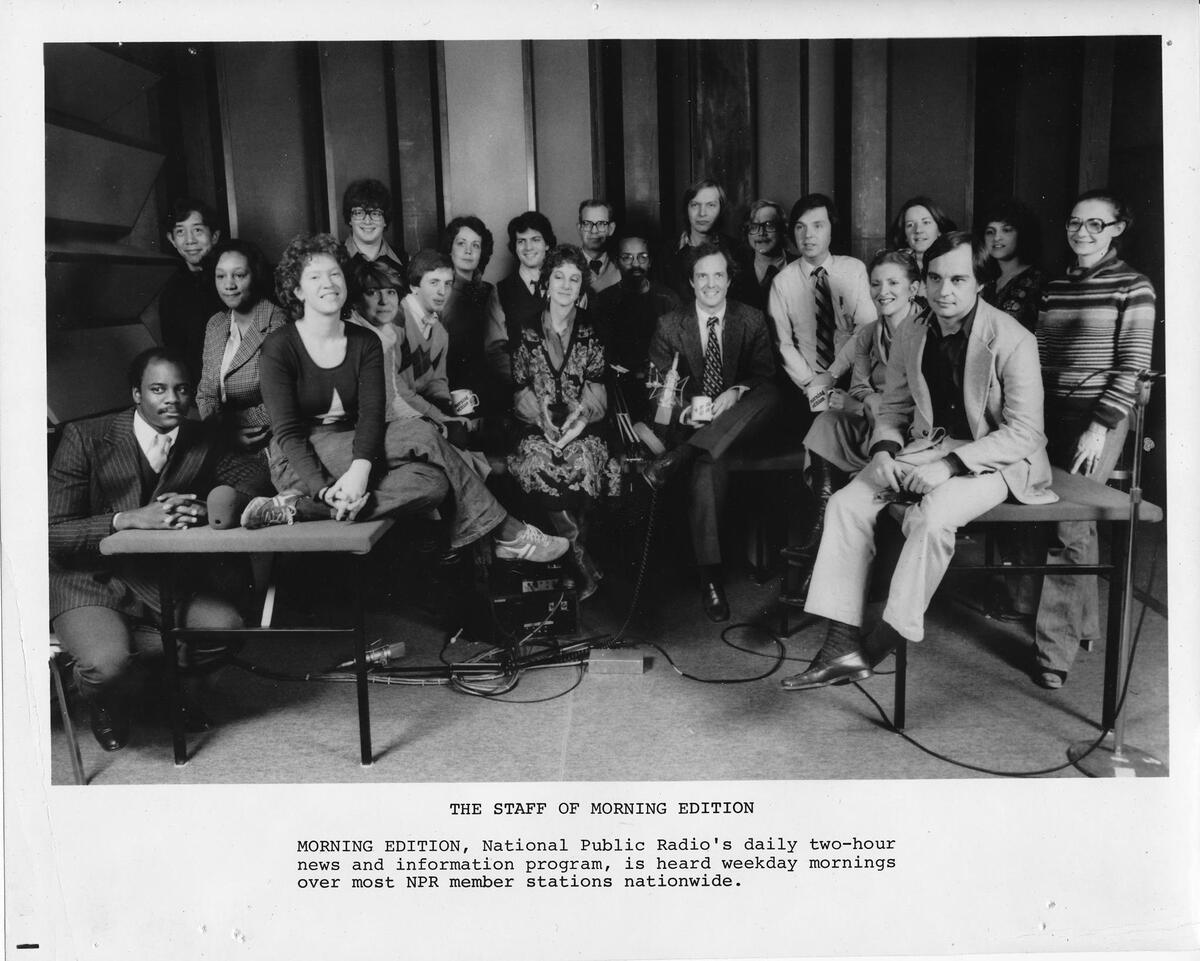 A staff photo taken during the early days of Morning Edition. Co-host Bob Edwards is in the back row, standing seventh from the left among the three men in glasses. His co-host, Barbara Hoctor, sits on the table at right, holding a mug. Hoctor left the show after a few weeks. Edwards was host until 2004, when he went to SiriusXM.

But the show was almost canceled before it even started — and there were obstacles to just keeping it on the air.

"They did this pilot with the original staff, and it was awful," said Bob Edwards, who hosted Morning Edition from 1979 to 2004.

The pilot played over closed circuit for NPR member stations' news and program directors, who complained that the show sounded too much like commercial all-news radio.

"It was absolutely a disaster. It was very chatty. It was like bad small-market television," Edwards said. "A lot of member stations had heard the pilot, and they didn't want any part of that."

Jay Kernis, a member of the original Morning Edition staff, said member station staffs were expecting to hear something that sounded more like a morning version of All Things Considered.

"NPR hired two producers from commercial radio [to develop the show]. They were quite accomplished gentlemen. They worked at a local Washington station that had 50% of the radio audience in the morning," Kernis said. "Unfortunately, they really didn't understand what NPR was about."

With criticism of the show cascading, NPR fired the producers from the commercial news station and also let go the two announcers who hosted the pilots, Mary Tillotson, who went on to work as a White House correspondent and talk show host for CNN, and Pete Williams, NBC News' justice correspondent. 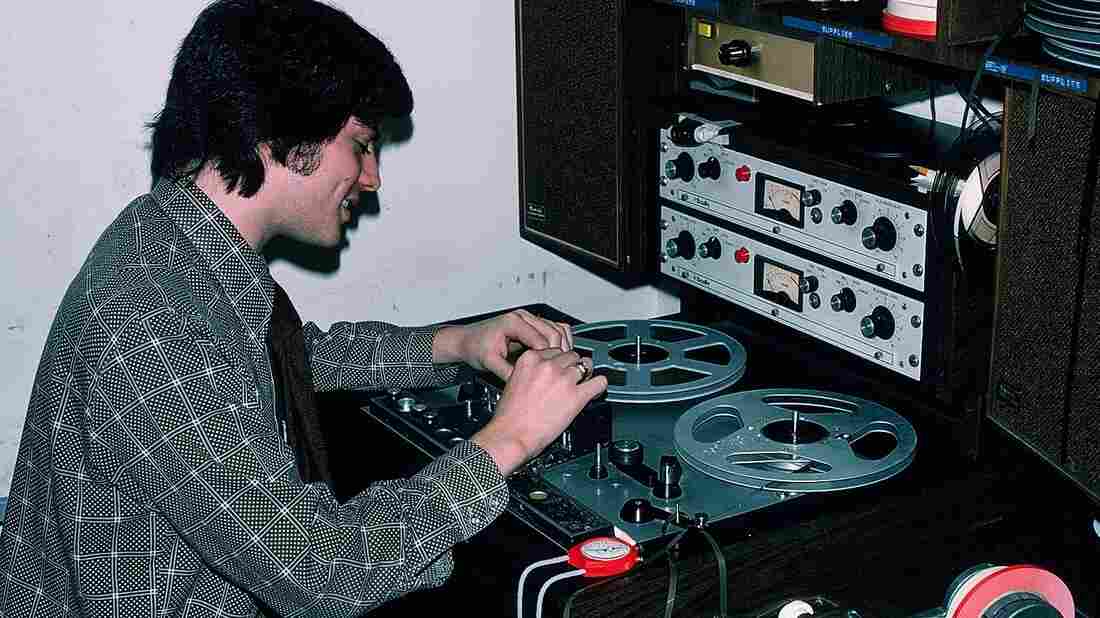 Jay Kernis edits tape for a story at NPR in the late 1970s. He left Morning Edition in 1985. Kernis is now a producer for CBS's Sunday Morning. George Geesey/NPR hide caption 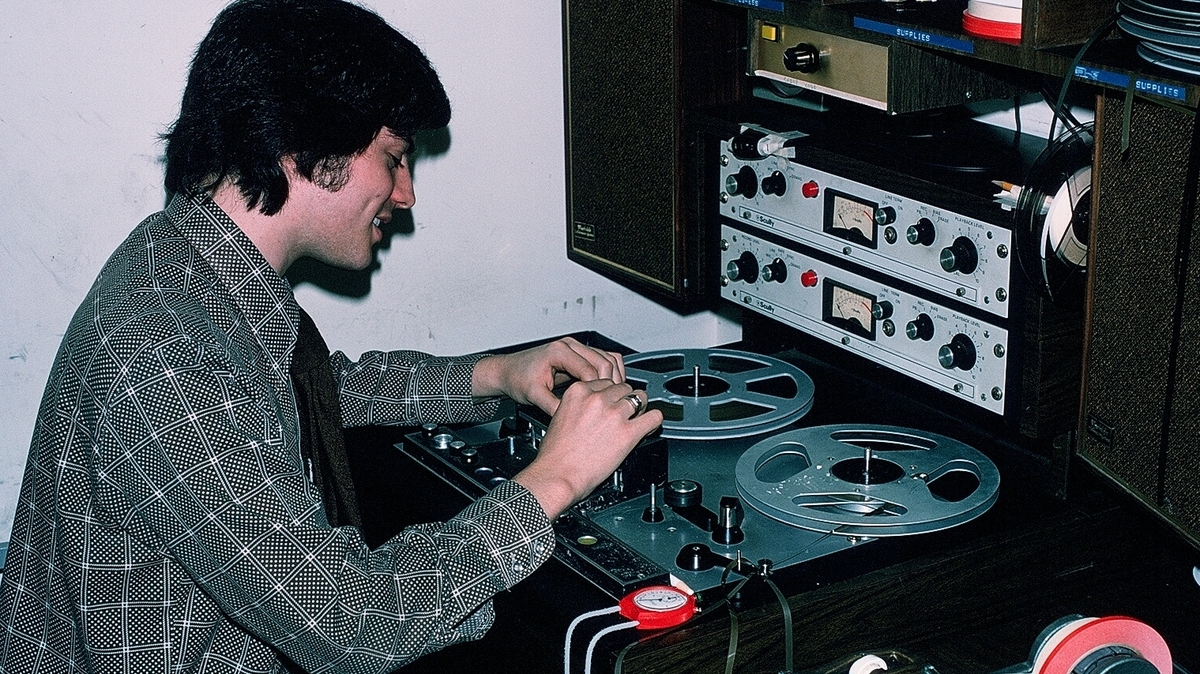 Jay Kernis edits tape for a story at NPR in the late 1970s. He left Morning Edition in 1985. Kernis is now a producer for CBS's Sunday Morning.

The show's major retooling came just two weeks before Morning Edition was set to premiere. There was talk of delaying the launch, but stations had already heavily promoted it.

"There was a meeting at the home of the news director at the time," Kernis recalled. "And the president of NPR, Frank Mankiewicz, looked at me and said, 'Well, you seem to know something about radio. We want you to get the show on the air.' "

Kernis was just 27 years old. He had produced arts and culture stories. He'd never run a daily news show. "I was pretty scared," he said.

First things first. Kernis needed a host. So he borrowed one from across the hall: Edwards, who co-hosted All Things Considered with Susan Stamberg. Edwards agreed to temporarily host Morning Edition for a few weeks until the show "got off the ground." Barbara Hoctor, a Washington, D.C.-based radio journalist, was hired as Edwards' co-host.

'Morning Edition' Celebrates 35 Years With A Trip Down Memory Lane

"I remember at one point Mankiewicz looking at me and saying, 'Just don't embarrass me,' " Kernis said.

The revamped Morning Edition was warmly received by station personnel, but Edwards said the show was not out of the woods yet.

Edwards said the reporters were already working long hours filing pieces for All Things Considered. Now they had to provide stories for Morning Edition without a raise.

Cokie Roberts, a Morning Edition contributor until her death in September, was one of those angry reporters. In a 1989 interview she said, "They [the NPR managers] told us we wouldn't be doing very much for it at all, that we'd be writing a news spot here and there. They lied!"

But Roberts and other NPR reporters eventually relented.

"They had all of these statistics that showed that morning is when a lot of people like to listen to the radio, and they knew that all of us were egomaniacal enough so that once we found out everyone was listening, we'd beg to be on that program — and right they were," she said.

And there were yet other big hurdles to clear. 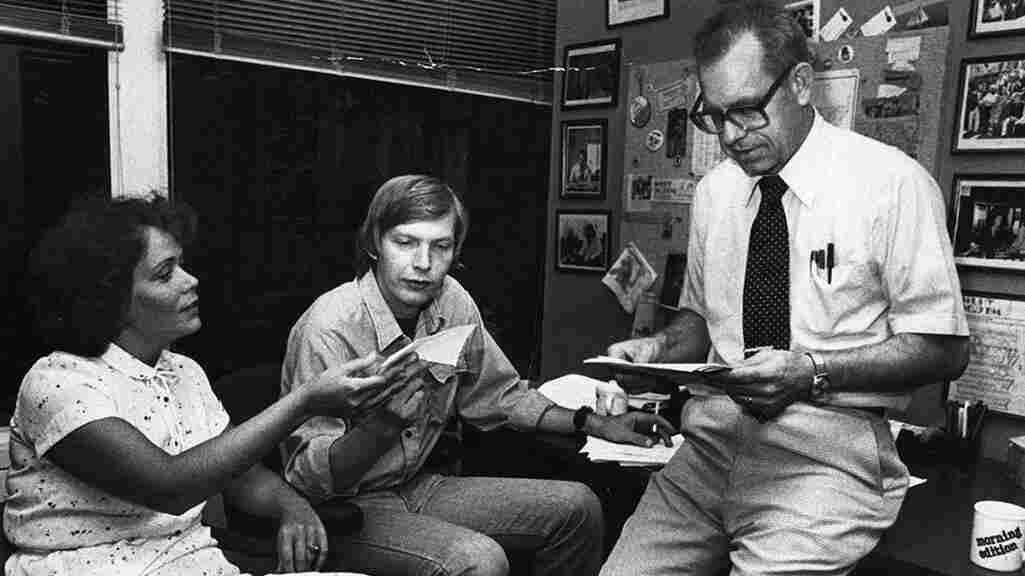 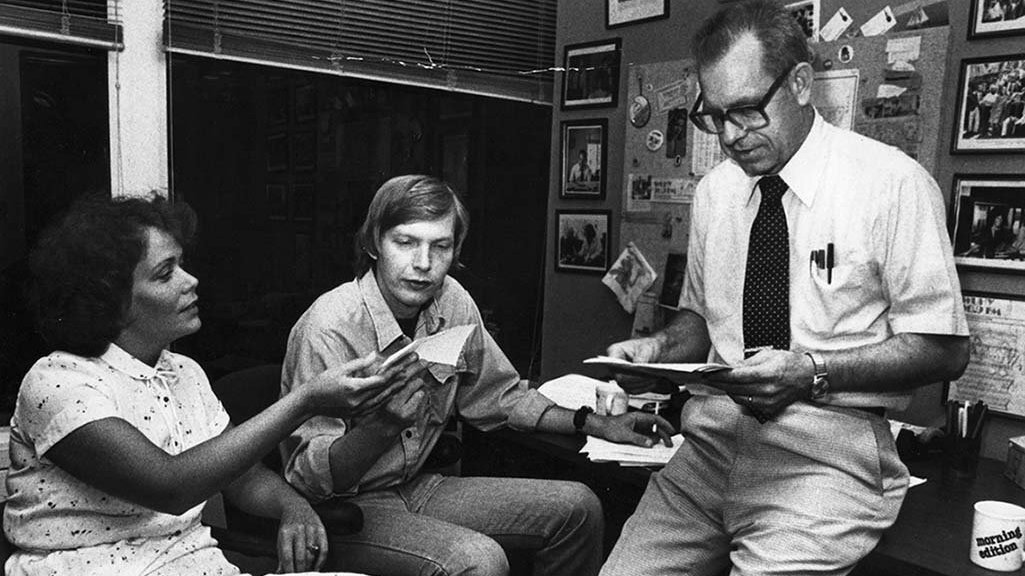 The day before the show's debut, militant students had taken over the U.S. Embassy in Tehran, Iran. Edwards remembered that it was other news outlets' lead story for months. "Did we have [a reporter] in Tehran? No. No one near Tehran," Edwards said. [Morning Edition debuted on Nov. 5, 1979. Check out the first show's rundown of segments here.]

NPR had only one foreign-based reporter at the time, Robert Siegel, future All Things Considered host.

So with few overseas resources and reporters reluctant to file pieces, how do you fill a daily two-hour show? "We did a lot of live interviews," Edwards said.

"We wanted to establish ourselves on Capitol Hill, and so we would interview a member of Congress every day. I thought it was ridiculous. I called it 'Meet the Member,' " Edwards said. "But, you know, it was a good thing. It was very smart that they had me doing that."

Edwards interviewed some of the biggest names in politics before they were big, including then-Arkansas Gov. Bill Clinton and then-Tennessee Rep. Al Gore.

Kernis also tapped a lot of commentators — ones who helped build an audience for the show through distinctive voices. There was Ellen Gilchrist, a short-story writer and novelist from Fayetteville, Ark., who with a gentle Southern accent would wax poetic about creativity and the joy of writing. John Ciardi, an etymologist, explained the origins of words and phrases with wit and charm. And Red Barber, a Hall of Fame broadcaster, was supposed to talk about sports with Edwards on Fridays but wound up veering off into advice about gardening, watermelons and sometimes news about cats. Edwards calls Barber, considered appointment listening, "the greatest audience builder for NPR."

'I've Enjoyed Every Minute Of It': Carl Kasell On His 60 Years In Radio

"It really prepares you to do live seat-of-the-pants breaking news when you're dealing with Red Barber," Edwards said. "It sounds ridiculous, but I think I did a better job on Sept. 11 talking to Red Barber for 12 years."

"You put an Ellen Gilchrist on. You put a Red Barber on, and we didn't sound like this, you know, elite Northeastern-U.S. inside-the-Beltway outfit," Edwards said. "We sounded like America — and still do."

Looking back over 40 years of Morning Edition, Kernis said there's one moment from the early days that stands out for him. It came shortly after NPR hired the producers from commercial radio to develop the show.

"[They] thought we were a messy group of producers," Kernis said.

So they put in a dress code.

"Now maybe that says what was wrong with the pilots, you know," he said. "They paid more attention to what we looked like than what we were making."