Accessibility links
'They Have Stolen Everything From Us': Iraq's Anti-Government Protests Continue Much of the protesters' anger is directed at Iran and at corrupt Iraqi politicians. "Parliament is just mafias and corrupt parties — all of them came to destroy this country," says one protester. 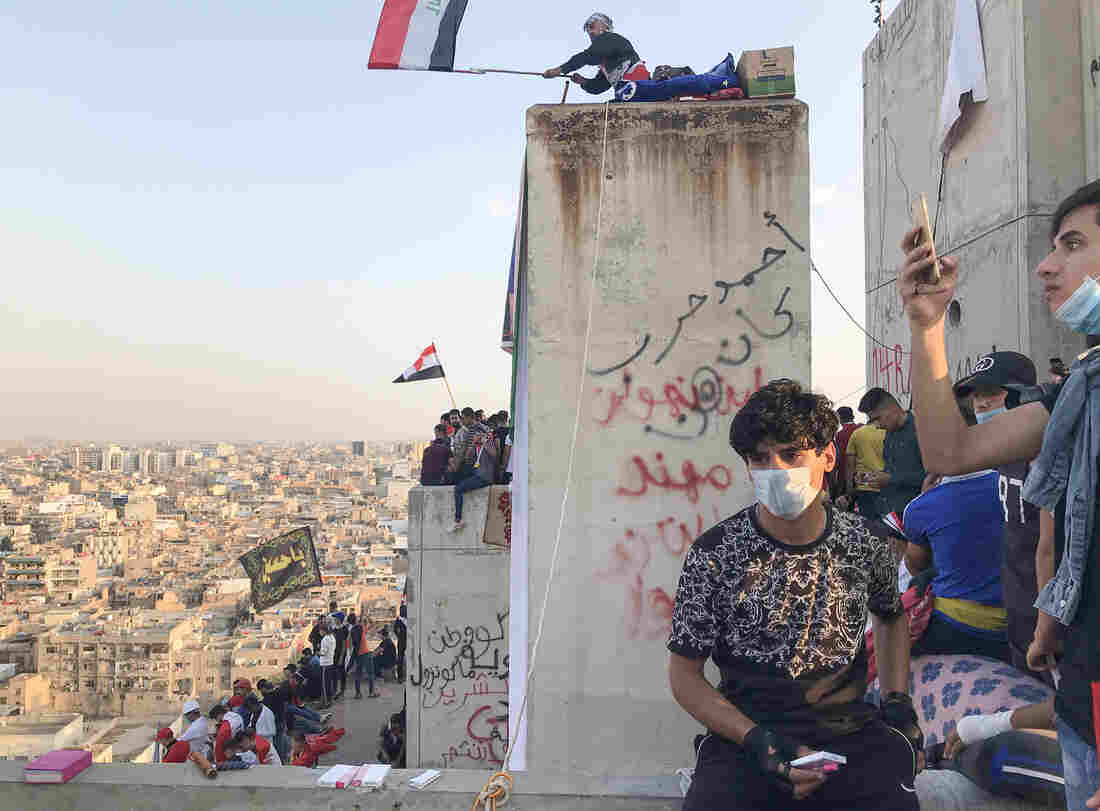 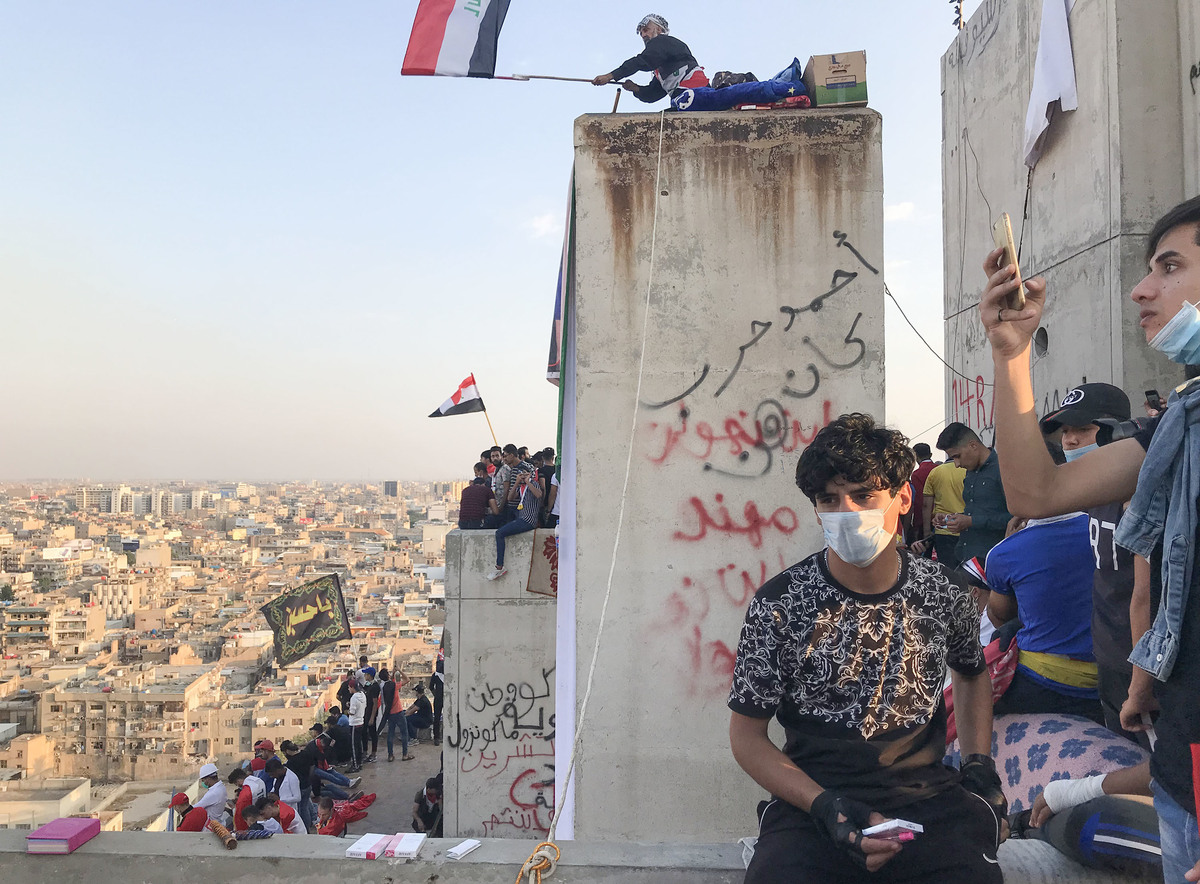 Demonstrators in Baghdad perch on top of an abandoned high-rise overlooking Tahrir Square.

Essa, 23, shakes a can of red spray paint, crouches over the sidewalk near Baghdad's Tahrir Square and scrawls something shocking about Iran's supreme leader.

"Khamenei is an ass," it reads.

The insult to Grand Ayatollah Ali Khamenei, spray painted without fear, would have been unimaginable before anti-government protests swept from Iraq's southern coast to its capital in the past month. Demonstrators accuse Iran and Iran-backed politicians of controlling Iraq and harming the country's interests. Iran has strong links to Iraqi security and intelligence forces, and even perceived insults have led to threats.

Essa says he's not afraid. He has nothing to lose. He's a laborer but he has no work. And like most of the protesters, he blames their entrenched poverty on corrupt Iraqi politicians who put other countries' interests first.

The protests, the biggest since 2003, have shaken the foundations of the Iraqi government. More than 250 protesters have been killed and thousands more wounded since the demonstrations began in early October, demanding jobs and better public services.

Roads are blocked and schools shut down. Many Iraqis fear an even bigger confrontation could occur between protesters and government security forces that include Iran-backed former militia members.

Prime Minister Adel Abdul-Mahdi, a year into his job, has promised to resign after a successor is named. Iraq's President Barham Salih has called for early elections after parliament passes a new election law. The reforms could potentially reduce the number of members of parliament, who are seen as raking in huge salaries, though many rarely show up for sessions.

But the anger runs much deeper among protesters than a disdain for the Iraqi parliament.

"We came here prepared to die because after the fall of [Saddam Hussein's] regime, we haven't seen anything good," says Mahmoud, who came to a protest last week with a group of friends from a city north of Baghdad. "Parliament is just mafias and corrupt parties — all of them came to destroy this country," he says referring to politicians who returned to govern Iraq when Saddam Hussein was toppled after the U.S.-led invasion in 2003.

NPR is using protesters' first names because hundreds have been arrested and some kidnapped for participating in the past month's peaceful demonstrations.

Yasser, an off-duty Iraqi army soldier who has joined the protests, lifts his pant leg to show a mass of scar tissue. Wounded in 2013, at the beginning of Iraq's battle against ISIS, he says he paid the cost of all his medical operations himself.

Iraq is one of the biggest oil producers in the world. But tens of millions live in poverty. Across the country, failing public services and rampant corruption leave citizens paying bribes for everything from having paperwork processed at government ministries to getting a job.

"They have stolen everything from us — they have stolen even our dreams," says Baraq, a university student who has wrapped an Iraqi flag around his shoulders and holds a white plastic rose he says symbolizes the peaceful protest.

The protests started with young men and then widened to include women and families, turning Tahrir Square into a flag-waving street party. But the demonstrators remain overwhelmingly male and overwhelmingly in their 20s or late teens — the first generation to have grown up with Internet and without Saddam Hussein.

Previous protests in central Iraq were Sunni-led, railing against sectarian policies by the Shiite-led government. But in the current protests in Baghdad and the south, demonstrators are largely Shiite — and most reject sectarian divides, saying the important thing is that Iraq is governed by and for Iraqis. The protesters even include active-duty soldiers or fighters with Iran-backed paramilitaries. Some protesters are as young as in their mid-teens.

"At that age, you don't come from a past. There is no past," says Laith Kubba, an independent adviser to the government who was part of the opposition to Saddam Hussein, starting when he was a teenager. "The only thing you have is the present and the future. ... These young people just look to the future and say, 'There is no future with you.' It's very simple. And whatever you do to them, that message will just get stronger and louder." 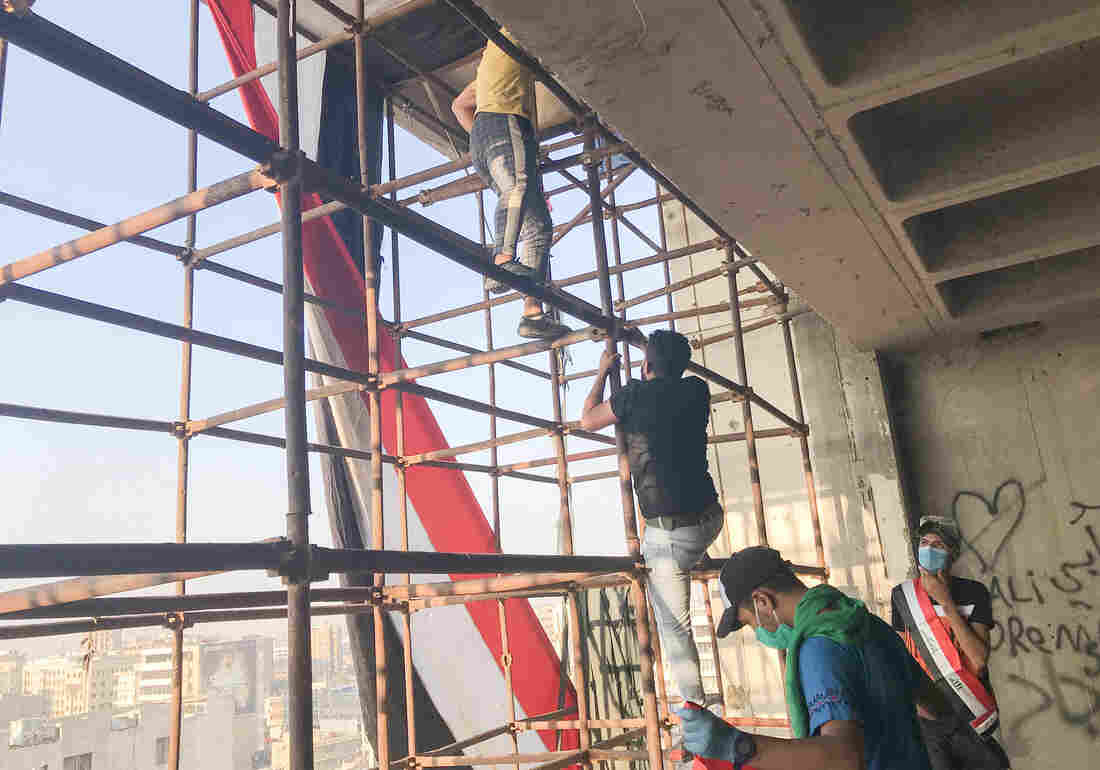 Protestors climb scaffolding to reach the top of a Baghdad landmark known as the "Turkish restaurant building." It has no electricity, elevators or even walls. The building looks over Tahrir Square and has been occupied by protesters to prevent security forces from using it to shoot at demonstrators below. Jane Arraf /NPR hide caption 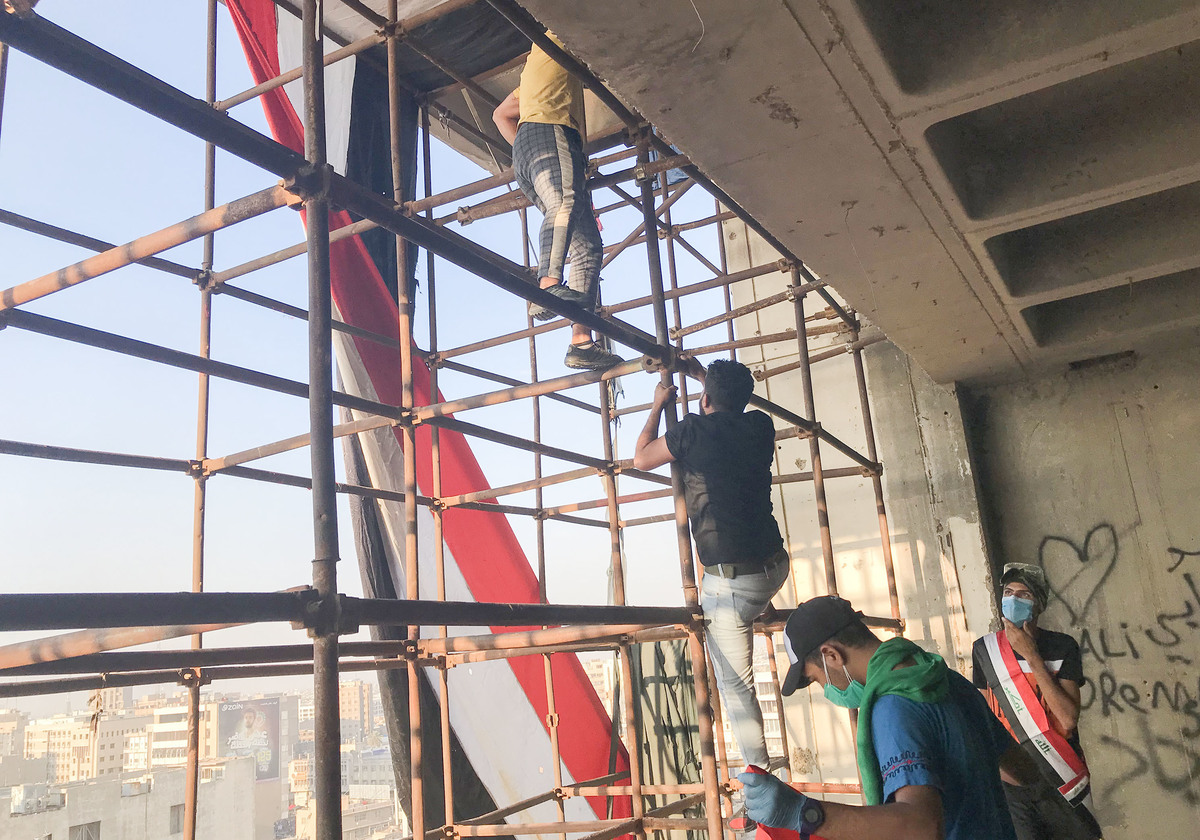 Protestors climb scaffolding to reach the top of a Baghdad landmark known as the "Turkish restaurant building." It has no electricity, elevators or even walls. The building looks over Tahrir Square and has been occupied by protesters to prevent security forces from using it to shoot at demonstrators below.

Beyond Tahrir Square, protesters have occupied the concrete shell of a 13-story high-rise building known as the "Turkish restaurant building," to try and prevent security forces from shooting at demonstrators on a bridge below.

In the 1990s — the decade when most of today's protesters were born — it housed a fashionable Turkish restaurant on the top floor. It was damaged in the 2003 invasion and has remained empty ever since.

The building, with no electricity, no elevators and no plumbing, has large, round holes drilled into the concrete walls, believed to have been used as rests for security forces' sniper guns.

The government's own report says 149 protesters were killed in early October, many shot in the head or the chest.

The bridge, protected by concrete barriers and riot police, leads to the Green Zone, home to the sprawling U.S. embassy and Iraqi parliament. A street before the Green Zone leads to the Iranian embassy, now evacuated of diplomats but still a clear line that Iraqi forces will not allow to be breached. Last weekend, protesters set fire to the Iranian consulate in Karbala. 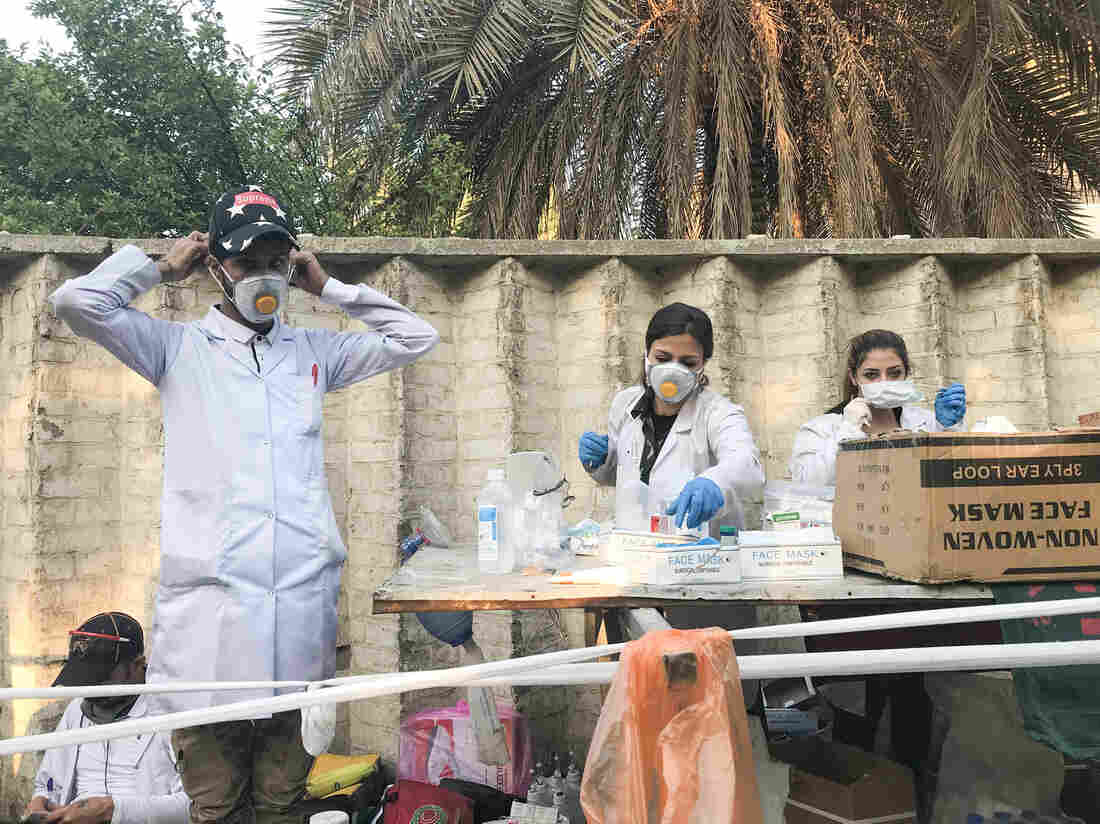 Medical volunteers wait near Baghdad's Tahrir Square. More than 250 protesters have been killed and thousands wounded since anti-government demonstrations began in early October. In Baghdad, riot police are now restricted to using rubber bullets and tear gas, and some protesters have died after being hit by tear gas canisters. Jane Arraf/NPR hide caption 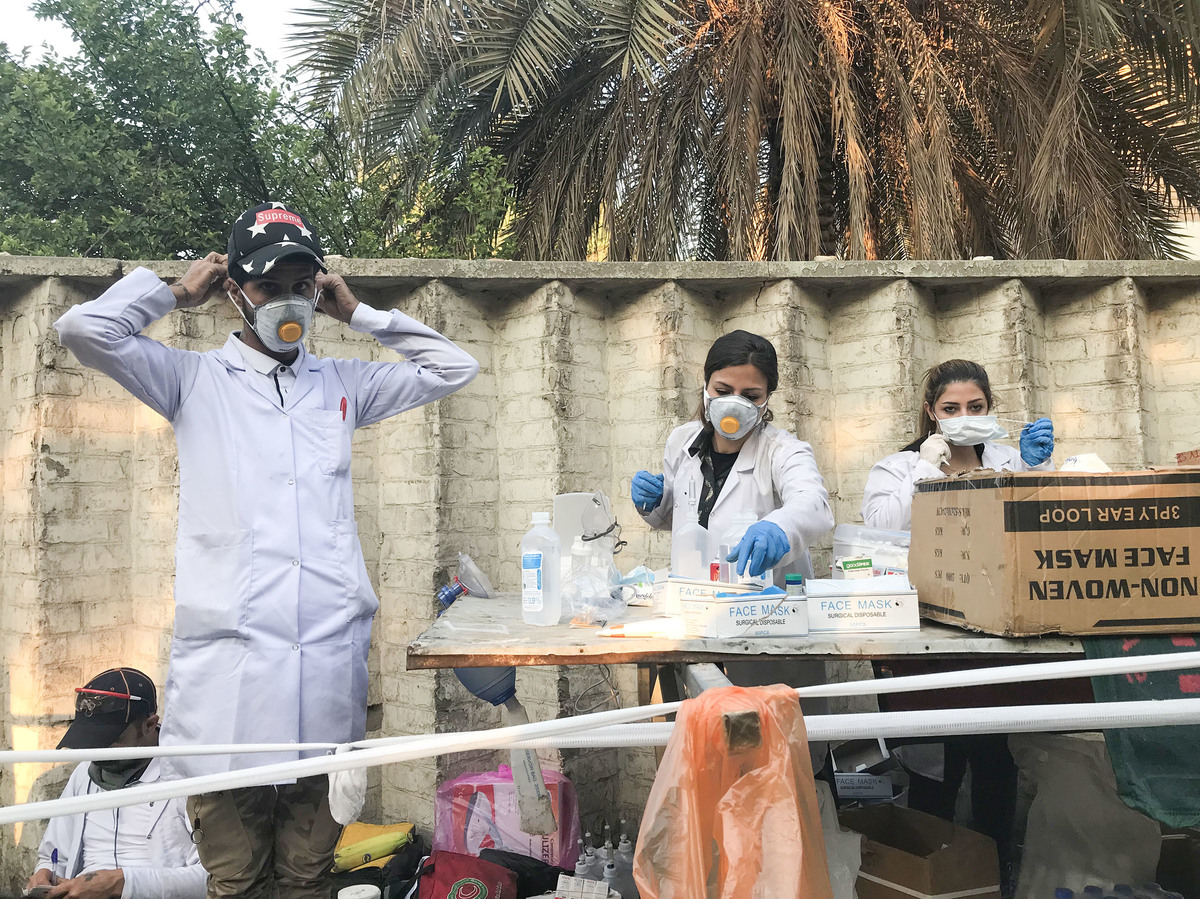 Medical volunteers wait near Baghdad's Tahrir Square. More than 250 protesters have been killed and thousands wounded since anti-government demonstrations began in early October. In Baghdad, riot police are now restricted to using rubber bullets and tear gas, and some protesters have died after being hit by tear gas canisters.

On the sunlit roof of the concrete shell of the high-rise, dozens of young people stand under the shade of a giant Iraqi flag or dangle their legs over the building's precarious edge. From a lookout above, an older man with a gray-and-white beard pumps his arms, waving another large flag at the crowd below.

"They don't shoot in the daytime. But at sunset, security forces come out and disperse everyone from both sides," says another protester, Akeel, looking down from the roof at the rows of demonstrators on the bridge and the three-wheeled tuk-tuks waiting to evacuate the wounded. Near the riverbank, a few young men collect stones to lob at riot police from slingshots made from rubber sandals.

The protesters fear government forces will storm the concrete high-rise to dislodge them and are determined to keep control of it. Lines of young men ferry boxes of food up the narrow stairs.

On the roof, medical volunteers bandage the arms and legs of protesters hit by shrapnel. The more seriously wounded are rushed from the bridge to ambulances waiting in the square.

Ghazwan, a protester who spent a year-and-a-half as an unpaid member of an Iran-backed militia fighting ISIS, says he has been sleeping on the concrete floor for a week.

"If not for me, this is for my future sons. So they can get jobs," he says. "There is no future here in Iraq."

Another protester, with rosy cheeks that make him look as if he just came off a football field, is 15. "I couldn't let the other guys come here and not do anything," he says.

In an address delivered by his representative after last week's Friday prayers, Iraq's Grand Ayatollah Ali al-Sistani — a reclusive and revered Shiite cleric — said he backed the peaceful protests. He directed the Iraqi government not to respond with weapons and troops. His directive is believed to be restraining security forces that are not totally under the control of the Iraqi prime minister.

The protests are largely leaderless. But a leadership has begun emerging, advised by an older generation of human rights activists who have seen previous protests crushed by past Iraqi governments.

"I tell them they can't just sit around," says longtime activist Kamal Jabar, at the top of the high-rise occupied by protesters. "I'm hoping we can mobilize this energy and turn this anger and this madness into a peaceful resolution to convince the international community to listen to them."

To the young men eager to take on the security forces, his message is: "I want to see you in a nice suit. Not in a coffin."