Accessibility links
Roger Stone, Trump Friend And Alleged Link To WikiLeaks, Faces Trial The president's adviser is facing charges that he allegedly lied to Congress and obstructed an official proceeding. Stone has pleaded not guilty and said he has done nothing wrong. 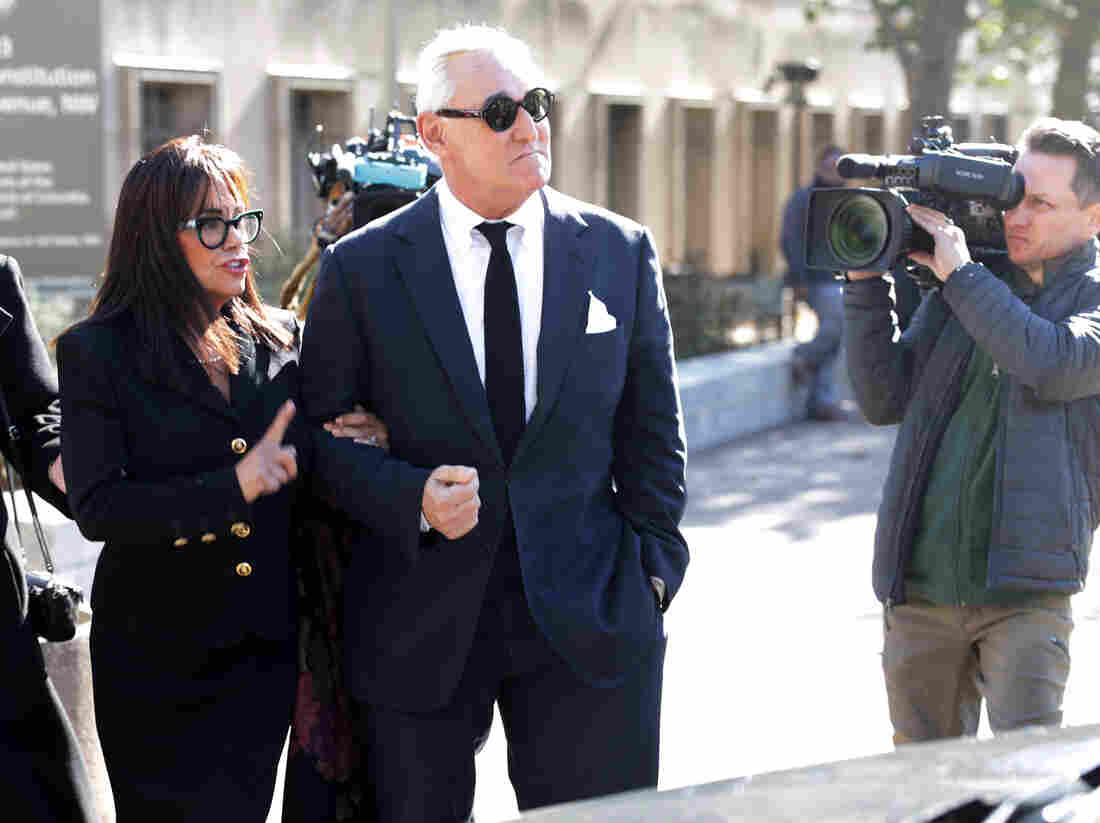 Roger Stone, a former adviser to President Trump, departs a Washington, D.C., courthouse with his wife on Monday. Stone faces charges that he allegedly lied to Congress and obstructed an official proceeding. Stone has pleaded not guilty, and his trial is set to begin Tuesday. Alex Wong/Getty Images hide caption 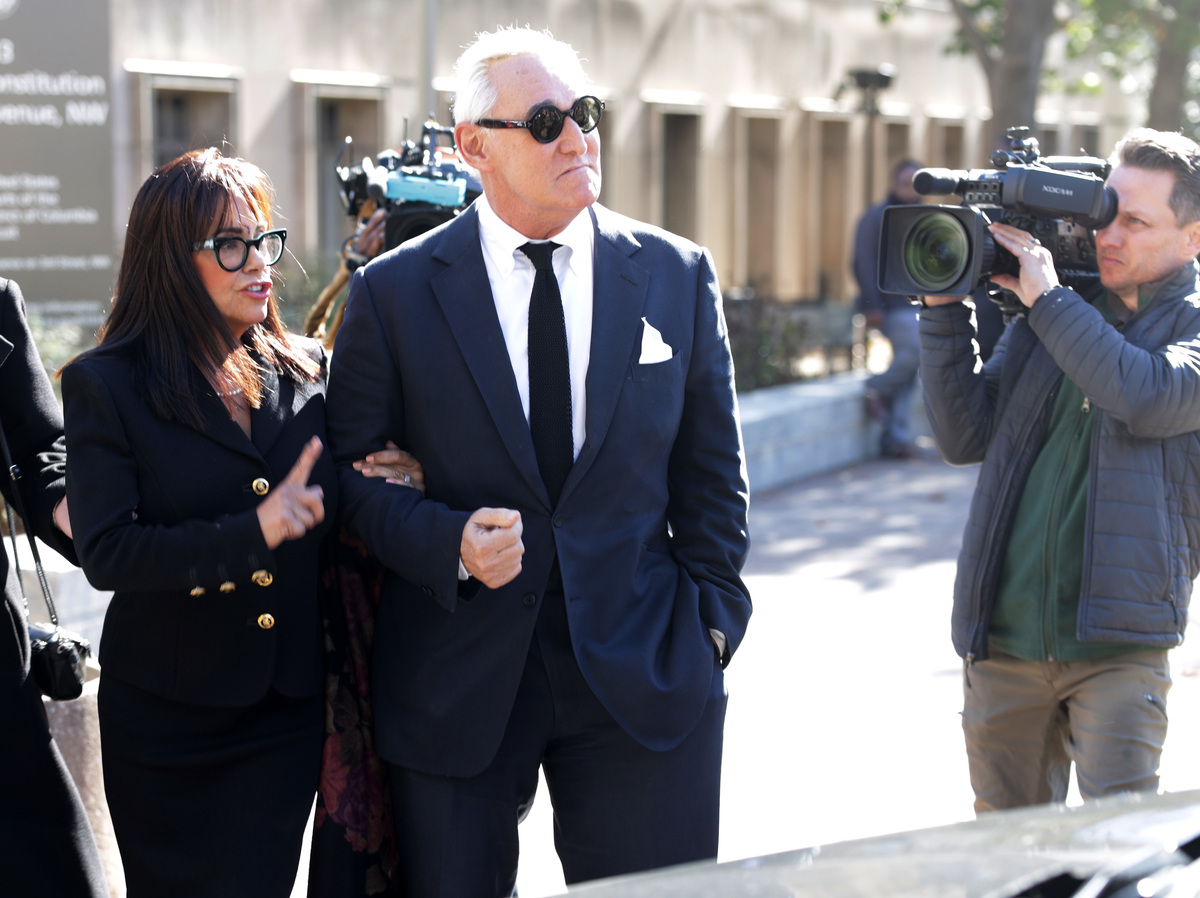 Roger Stone, a former adviser to President Trump, departs a Washington, D.C., courthouse with his wife on Monday. Stone faces charges that he allegedly lied to Congress and obstructed an official proceeding. Stone has pleaded not guilty, and his trial is set to begin Tuesday.

President Trump's friend and political adviser Roger Stone is set to go on trial Tuesday in a proceeding that could reveal just how close Trump world got to the Russian interference in the 2016 election.

Jury selection is scheduled to commence following months of unusual public silence from Stone, who has been gagged by the judge in his case following a flap this year over his posts on social media.

Stone pleaded not guilty in January after a grand jury in Washington, D.C., returned an indictment with one count of obstructing a proceeding, five counts of making false statements to Congress and one count of witness tampering — because prosecutors allege that he tried to persuade another witness to lie to Congress too.

Neither Stone nor any other Trump insider has been charged with colluding with Russia's interference in the 2016 election; former Justice Department special counsel Robert Mueller concluded that there wasn't enough evidence to bring a case of conspiracy.

Stone says he has done nothing wrong.

He joined Trump and others in blaming "biased" officials within the "deep state" for abusing their powers.

One of the targets for that blame earlier this year was the judge in his case, Amy Berman Jackson, whom Stone's Instagram account then made the subject of criticism.

Jackson summoned Stone to court for a warning, and then, after what she determined was too little care by him or those with access to his social media accounts, Jackson tightened the gag in July.

Stone and some of his associates may have been links in a chain that connected Trump in New York City with WikiLeaks founder Julian Assange in London, who at the time had confined himself in the Ecuadorian Embassy there.

Assange, in turn, was in contact with Russia's military intelligence agency, the GRU, which had stolen a trove of embarrassing material from political targets in the United States.

WikiLeaks released many of those emails and other documents with disruptive effects on political life in the U.S. — and enjoyed public encouragement by Trump and his campaign.

What Mueller's investigation revealed was how much Trump and aides worked to get more.

The campaign built into its plans the expectation that there would be more damaging revelations about Hillary Clinton, and Trump's campaign bosses also sought contact with some people connected with the interference over the course of the election season.

Charging documents in Stone's case describe a message from one of Stone's contacts depicting the person in a photo taken outside the Ecuadorian Embassy — implying that he'd visited Assange — and other messages in which Stone and associates discuss the prospect of more "dumps" from WikiLeaks.

WikiLeaks released a trove of emails by Clinton's campaign chairman in October 2016 on the same day that a video recording appeared of Trump boasting in crude terms about his power over women.

Investigators never established publicly whether there was any connection between these two events.

Although Trump campaign bosses praised Stone at the time the WikiLeaks release took place, he has since argued that he actually took no action and simply let his interlocutors believe he was stage-managing events that were playing out on their own.

Also, at least one of Stone's associates is described in court documents as saying that he too actually had no back channel to Assange.

Prosecutors allege that Stone lied about much of this to Congress.

He told lawmakers he didn't have any emails, text messages or other documents related to the matter. Prosecutors also charge that Stone lied about his communications with others, including the associates whom he allegedly told to be in contact with Assange.

In the case of one other potential witness, Stone is described in charging documents as urging him to copy a character from The Godfather Part II, Frank Pentangeli, and pretend, when he appears for a hearing before members of Congress, not to know what he really knows.

What's less clear is how much Stone talked about WikiLeaks with Trump and campaign aides.

The section of Volume I of Mueller's report that describes Trump's enthusiasm about getting Clinton's emails, pages 52 through 57, are heavily redacted, but they suggest that Trump and campaign chairman Paul Manafort were personally involved.

The explanation given for the redactions was "harm to ongoing matter," presumably the prosecution of Stone. If the U.S. Attorney's Office for the District of Columbia reveals those previously redacted details in court to establish facts that it says prove what Stone lied about, key areas of the story could be confirmed for the first time.

For example, did Stone or his associates truly communicate with Assange, and if so, how? Was the nature of that link purely about the stolen political material, or was there more?

A section in Stone's indictment describes how one putative intermediary told Stone that Trump's campaign should begin drawing attention to Clinton's supposed ill health, as it later did. What was the origin of that messaging strategy, and were there other offers like it?