Accessibility links
Book Review: 'In The Dream House' Conveys A Haunting Nightmare By Inventing A New Form Of Memoir Under Carmen Maria Machado's narrative of a psychologically abusive relationship lies an academic view of female queerness, a play, a choose your own adventure book, a look at the mechanisms of abuse. 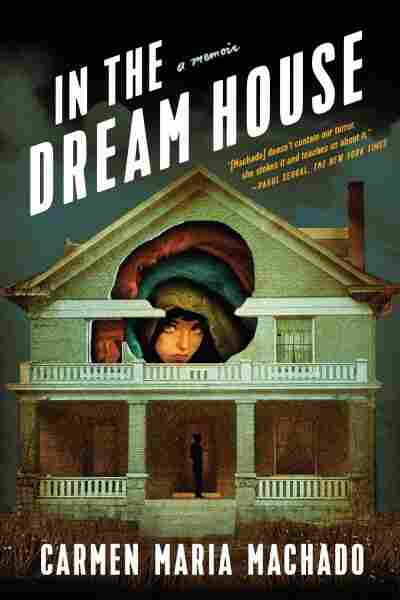 In the Dream House

Carmen Maria Machado's In the Dream House is the most innovative memoir I've ever read.

On its surface, the book recounts a psychologically abusive relationship that marked Machado's life in many ways. However, just below the surface, the narrative continually shapeshifts and at times becomes a play, an academic look at female queerness in mainstream media, a choose your own adventure book, and a sharp deconstruction of the mechanisms of psychological abuse. That said, the total is more than the sum of its parts and In the Dream House is the kind of book that burrows under the reader's skin while simultaneously forcing her to inhabit the body of the writer.

The first element that makes In the Dream House so inventive is that most of it is written in the second person. Most of the story takes place in a beautiful small house in Bloomington, Indiana, where Machado and her nameless girlfriend start living together shortly after they meet. They are young and in love. The place is pretty, cozy, and they are in it together. Sadly, the idyllic atmosphere quickly shatters because Machado's girlfriend is prone to violent outbursts and often engages in emotional, verbal, and psychological abuse. She can be dreadfully cruel and physically destructive, sometimes without provocation. Machado's writes about it all with devastating honesty and vulnerability, both of which are magnified by using second person. This is Machado's story of suffering and survival, but you are in there, and that makes the house your house, the girlfriend your girlfriend, the pain your pain, and the abuse Machado endured something you must digest and process yourself.

While most memoirs adhere to a somewhat predictable structure, In the Dream House obeys its own set of rules and breaks away from all established formats. Instead of Machado's life, it focuses on the arc of the relationship. The start, for example, immerses readers in the world of possibility that marks the start of most relationships:

"She loves you. She sees your subtle, ineffable qualities. You are the only one for her in all the world. She trusts you. She wants to keep you safe. She wants to grow old with you. She thinks you're beautiful. She thinks you're sexy. Sometimes when you look at your phone, she has sent you something stunningly filthy, and there is a kick of want between your legs. Sometimes when you catch her looking at you, you feel like the luckiest person in the whole world."

Despite the auspicious start, darkness is hiding in every well-lit corner of their house, and it comes out constantly to remind Machado of a devastating truth: "Fantasy is, I think, the defining cliché of female queerness."

The mix of good and bad, love and abuse, and tenderness and violence that Machado experiences force her to live in the shadow realm of interstitial spaces where happiness never lasts and every sensual, humorous, or tender moment is pregnant with the possibility of its exact opposite. As if that wasn't enough, she has to deal with her developing understanding of her own identity and the ways in which it can be affected by those outside looking in:

"Heterosexuals have never known what to do with queer people, if they think of their existence at all. This has especially been the case for women — on the one hand, they seem like sinners in theory, but with no penis how do they, you know, do it?"

Machado is strong and grows stronger throughout the relationship, but she understands that everything she builds is at the mercy of others: "The queer woman's gender identity is tenuous and can be stripped away from her at any moment, should it suit some straight party or another." Despite this, she carries on and develops coping mechanisms to deal with her reality. Some work and some don't, but she ultimately survives to write about it. This book is a scream that ensures visibility, a chronicle of truth that weights more than a thousand theories and all the efforts to erase the reality of abuse in lesbian couples.

In the Dream House is an uncomfortable read. It is a narrative that is never what you think it is, a story about "a house that was not a house and a dream that was no dream at all." The nameless woman and the house merge together and become a dark reality as well as a haunting nightmare. They try to destroy Machado, but she somehow becomes stronger because of it and turns into a new person despite the fear, tears, and bad memories. Throughout all of it, Machado learns to navigate her own sexuality and her writing while making sure she understands the place she occupies in a world that has always tried to erase women like her. This book makes that erasure impossible.