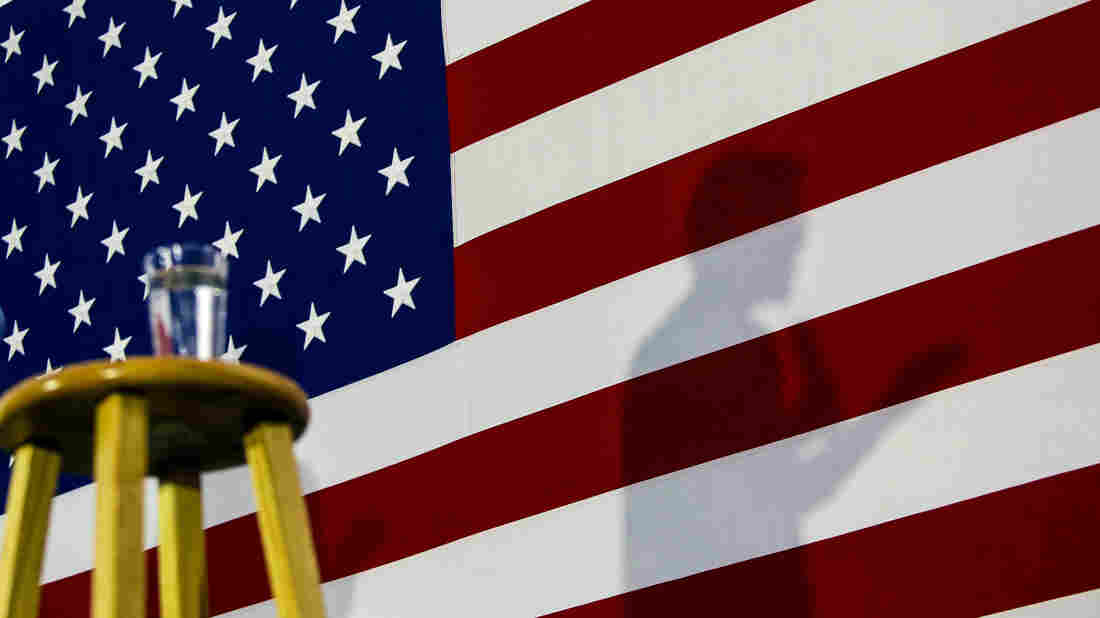 An impeachment trial early next year could keep Sen. Elizabeth Warren, silhouetted during a town hall in Iowa, and other Democratic presidential candidates off the trail at a crucial time. Joshua Lott/Getty Images hide caption 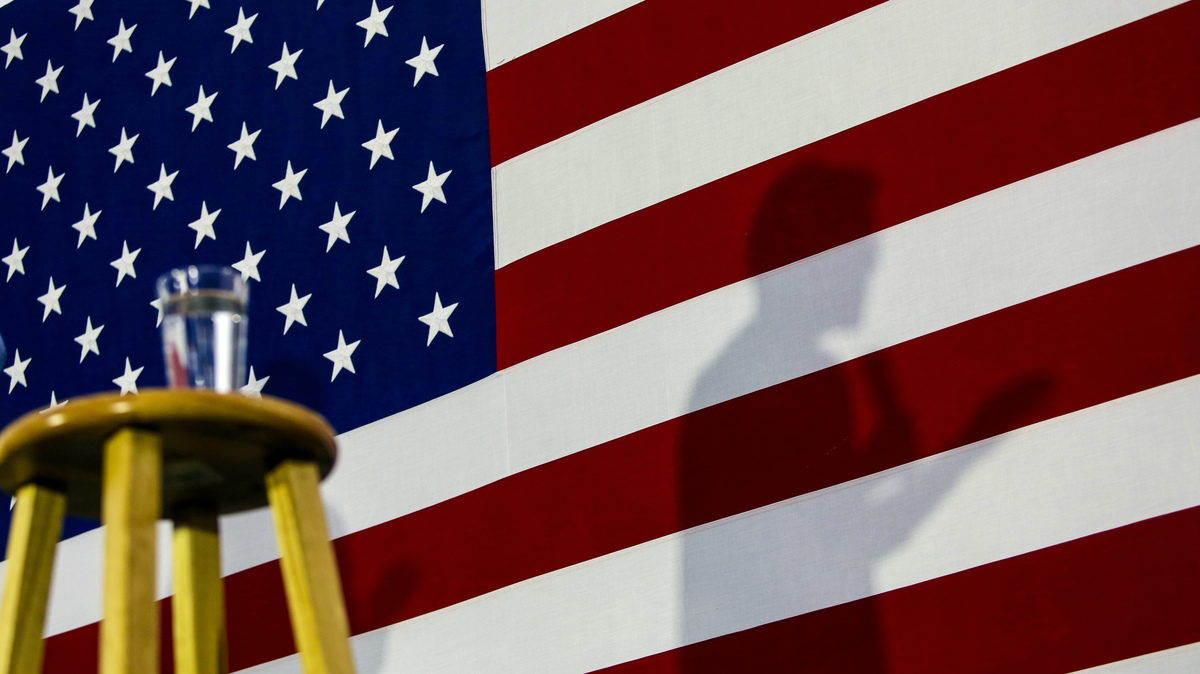 An impeachment trial early next year could keep Sen. Elizabeth Warren, silhouetted during a town hall in Iowa, and other Democratic presidential candidates off the trail at a crucial time.

Massachusetts Sen. Elizabeth Warren has been calling for President Trump's impeachment since the spring. California Sen. Kamala Harris wasn't too far behind her. New Jersey Sen. Cory Booker's been pushing for it for months.

In fact, all six U.S. senators still running for president are backing the House's impeachment inquiry.

But now that the lawmakers may be getting what they want, many political operatives see it as a train wreck for their presidential campaigns.

"It would be a disaster," said Jason Johnson, the chief political strategist for Texas Sen. Ted Cruz's 2016 presidential campaign.

Johnson wasn't talking about the politics of impeachment, but rather the timeline. Namely, the fact that a House vote on articles of impeachment at the end of the year, which many on Capitol Hill expect, would set up a Senate impeachment trial in January.

That would keep those six candidates stuck in Washington, acting as jurors – and out of Iowa and other key early states — in the critical final weeks before the caucuses.

"We will have to convene every day, six days out of seven," Senate Majority Leader Mitch McConnell recently told reporters. President Bill Clinton's 1999 impeachment trial lasted more than a month. The only other impeachment trial in U.S. history, President Andrew Johnson's, ran on and off for more than two months.

Even if a Trump trial only lasts a few weeks, it will still effectively freeze campaigning for Warren, Harris, Booker, Bernie Sanders, Amy Klobuchar and Michael Bennet.

"I can't think of more devastating news if you're running one of these campaigns for president than the news that your candidate is going to be bound to a desk in Washington, day after day, in the run-up to the Iowa caucuses," said David Axelrod, who helped mastermind Barack Obama's 2008 campaign, which began with an upset Iowa victory.

A prolonged absence from the campaign trail is especially harmful in Iowa, a state that cherishes up-close-and-personal campaigning. "You know, it's a tactile kind of event, where people expect to be seen and touched and courted," said Axelrod.

Earlier this year, Harris caught grief from Iowans for canceling a campaign event to remain in Washington, D.C., for a Senate vote. The vote was on disaster relief. For Iowa.

Advertising, organizing, field staff and volunteers play a critical role in campaign success, for sure. But in Iowa, in particular, candidates need to be on the ground, greeting voters as much as possible. Johnson credits Cruz's 2016 victory there to "the fact that Cruz was willing to travel to all 99 counties in Iowa, and stay no matter how late, answer every question that was asked of him every day, four, five and six stops a day. That's what enabled the campaign to win."

For their part, the candidates are minimizing the political hurdle of an impeachment trial and saying that their constitutional duties come first – especially on a matter as serious as the possible removal of a president from office.

"Some things are more important than politics," Warren told NPR in New Hampshire. "We have a responsibility here. And it's not something I take any pleasure in, but it's something that has to be done. So I'll be there."

Campaign staffers for Harris and Sanders say the same thing.

It's not as if they have an option: Attendance at an impeachment trial is mandatory.

FACT CHECK: Is The Trump Impeachment Process Different From Nixon And Clinton?

Several campaign advisers argued to NPR that an impeachment trial would be the center of attention and that the senators running for president will be in the news, a lot, reacting to the day's proceedings.

And when it comes to the main event, the trial itself, there aren't any moments for candidates to rise to the occasion and appear presidential. They're passive jurors, sitting there listening to testimony. It's not like voters will be watching, noting that "your hands are nicely folded," joked Axelrod. "Do you look pensive and are you absorbing the evidence? I don't think that's going to cut it here."

An unprecedented problem to solve

So what will the six candidates/jurors do if the House does impeach Trump and trigger a trial between now and the caucuses? No campaign has come up with a clear solution yet — at least not one they'll share publicly.

"Frankly there aren't many good options for these guys," Johnson said, except for maybe this: "I would be there now, tomorrow, every day possible until I had to be back in the Senate for that impeachment trial."

At a certain point, though, they'll all be pulled off the campaign trail. Many observers think the trial traffic jam would give a clear advantage to one candidate: South Bend, Ind., Mayor Pete Buttigieg. He has spent a lot of time campaigning in Iowa, and his campaign is well-organized there.

"I suppose," Buttigieg told Iowa Public Radio. "I mean, I don't have any procedural role in impeachment, right, and I think it helps me concentrate on what's on voters' minds, in terms of what's going to impact them."

On the other hand, a lengthy Senate trial could be particularly harmful to candidates like Booker, Klobuchar and Harris, who are hoping for a late surge in the final months before the caucuses. It's happened before – the most dramatic example being former Pennsylvania Sen. Rick Santorum, who surged from low single digits to an upset win over Mitt Romney in the final weeks before the 2012 GOP caucuses.

"Santorum's numbers, as far as favorable ratings, were all very high for the whole campaign. But people just thought, oh, he's not going to have the caucus votes, and why am I going to waste my caucus vote?" recalled John Brabender, Santorum's top campaign adviser. "What happens is, once a candidate does start picking up numbers, you can see a reset of the board very quickly."

Granted, of course, the candidate is campaigning.