Accessibility links
7 Lessons From Tuesday's Kentucky And Virginia Elections The president's campaign may be raising lots of money off impeachment, but it may not be firing up rural voters as Republicans anticipated. We talk about that and six other lessons from the elections. 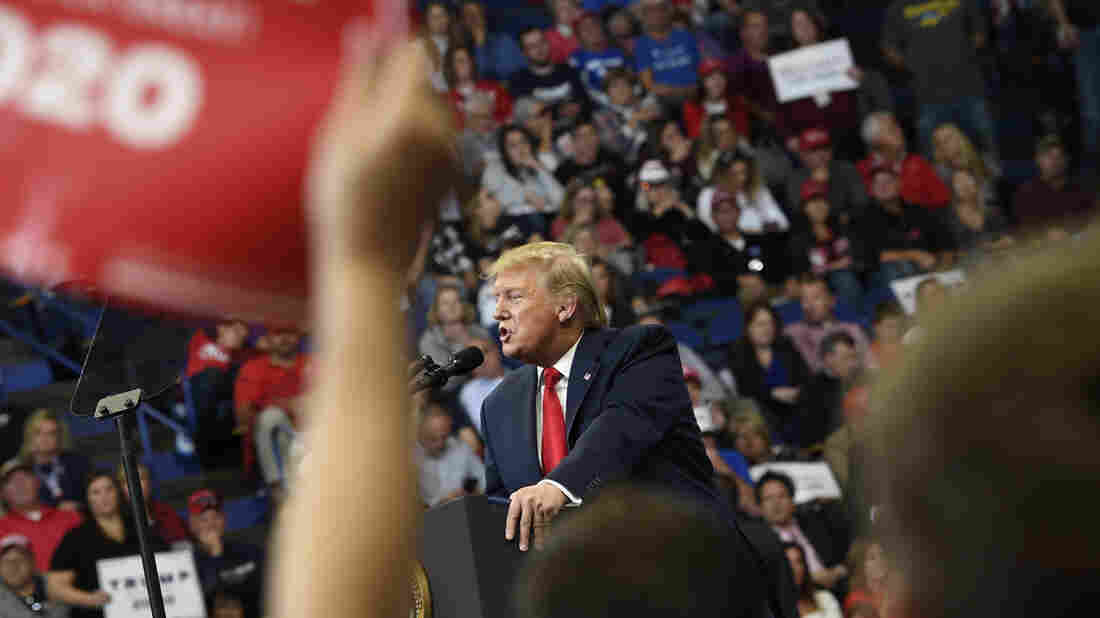 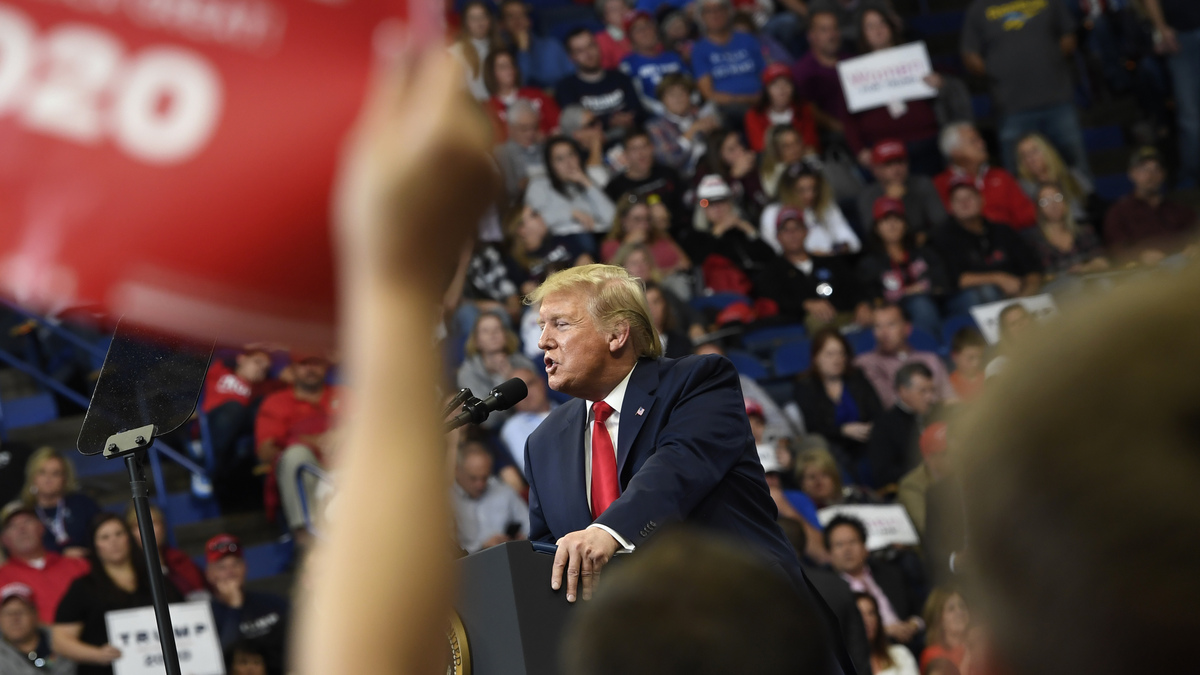 President Trump speaks during a campaign rally in Lexington, Ky., Monday. His efforts don't appear to have been enough to carry incumbent GOP Gov. Matt Bevin over the finish line.

Tuesday's statewide elections in Kentucky and Virginia were a big night for Democrats. And the results tell us a few things about national politics, consequential issues and President Trump.

In Kentucky, Democrat Andy Beshear, the son of former Gov. Steve Beshear, claimed victory Tuesday night and narrowly leads incumbent Gov. Matt Bevin by about 5,000 votes. Bevin has not yet conceded the race.

In Virginia, Democrats took over both chambers of the state legislature and now have full control of the state's political apparatus, a sweeping change from a decade ago when Virginia was considered the nation's bellwether.

Republicans kept hold of the governorship in Mississippi, but the margin — 5 percentage points — was far smaller than Trump's 18 points in 2016.

1. Impeachment did not help Republicans fire up conservatives in rural areas

Republicans have been saying that impeachment would backfire on Democrats and enthuse Trump's rural base. But that didn't pan out Tuesday in Kentucky and Virginia. Democratic voters in urban areas, on the other hand, are clearly fired up.

They showed up, especially in Kentucky, in higher-than-usual numbers, while voters in rural areas didn't. Trump, who only won 46% of the national popular vote in 2016, needs every last one of the people who voted for him then to come out again, especially as he has done almost nothing to try to win over persuadable voters this time around. Kentucky and Virginia could be warning signs that impeachment, even though the Trump campaign has raised lots of money off it, simply isn't the issue Republicans hoped it would be with voters.

"You can't let that happen to me!" Trump said at his Kentucky rally Monday night, imploring Kentucky voters to go to the polls for Bevin. He did not want the the narrative to be: "Trump suffered the greatest defeat in the history of the world."

Well, it wasn't the greatest defeat in the history of the world. But it is bad news for Trump, despite his campaign dismissing the loss as the result of problems with Bevin's campaign. So what will the results mean for his mood and state of mind, as congressional investigators keep asking questions in their impeachment inquiry?

Republicans want to dismiss the results in Kentucky as Bevin being unpopular and acerbic, and that is a point to consider, especially considering that Republican candidates swept all of the other statewide races, mostly by double-digit margins. But Bevin's unpopularity does not explain the results in Virginia.

The fact is what we've seen in election after election since Trump has been in office is Democrats outperforming prior performances — and that strength has been rooted in the suburbs. Remember, Republicans lost the House in 2018 because suburban voters turned on Trump and the GOP — and Republicans haven't fixed that problem.

Kentucky is a state Trump won by 30 points. So this should have been a layup for any generic Republican candidate. But Bevin is no generic Republican. He picked fights with all kinds of constituencies in the state.

We've seen it time and again — take Kansas, for example — that when a governor governs ideologically, they wind up in political trouble. And the opposite is true, too. The three most popular governors in the country are Republicans in liberal states: Charlie Baker in Massachusetts, Larry Hogan in Maryland and Phil Scott in Vermont. That should be a lesson that the GOP pays attention to.

5. Kentucky likely does not mean much for Mitch McConnell's and Trump's chances in the state in 2020

Sure, Bevin was unpopular, and Senate Majority Leader Mitch McConnell is unpopular in his home state, too. And, yes, Trump was not quite able to drag Bevin across the finish line Tuesday night.

But that does not mean either Trump or McConnell is in trouble in Kentucky next year. Over the past decade, McConnell has often been among the least popular senators with his constituents and yet has comfortably won reelection each time. He and Bevin have different brands in the state, and a McConnell protégé won handily for attorney general.

What's more, having Trump on the ballot will help McConnell. It's important to remember that while turnout was up substantially from the last governor's race in 2015, it was still down about 35% from the presidential election. Expect those numbers to shoot back up in 2020.

My, how times change and can change quickly. The results Tuesday night in Virginia mean Democrats in the state now control the legislature and every statewide elected office — governor, lieutenant governor and attorney general.

Virginia has outpaced the rest of the country, is no longer a swing state and is moving to being reliably Democratic. And that shift came in a year when the top trio of elected Democrats in the state faced a variety of scandals that hobbled their ability to campaign for down-ballot candidates.

7. The politics of health care and guns may be moving left

Before Bevin came into office, Kentucky had one of the best-run Affordable Care Act (aka Obamacare) exchanges in the country. It also expanded Medicaid under Gov. Steve Beshear, a Democrat.

Bevin took a very different approach. He tried to institute work requirements for Medicaid, which would have resulted in tens of thousands of Kentuckians losing health insurance. That was hotly divisive, and his loss Tuesday proves that once you give people the benefit, it is very difficult to take it away.

That has long been the argument Democrats have made in favor of the Affordable Care Act even when it was unpopular. And guess what? As predicted, it has grown more popular, and without an alternative, Republicans have struggled to figure out what to do about it.

In Virginia, guns were a top issue after a raft of mass shootings nationally and in the state. Gun-control groups outspent the National Rifle Association by about $500,000, and Tuesday's Virginia results showed that with a concerted effort, lots of money and focused activism, the tide could be turning on gun policy.