Accessibility links
Book Review: Stan Lee Held High In 'A Marvelous Life' As The Man Who Made Superheroes Matter Danny Fingeroth spends some time unpacking Lee's long-running dispute with Jack Kirby and others over ownership, but mainly offers strong insights into the forces that drove Lee and Marvel to success. 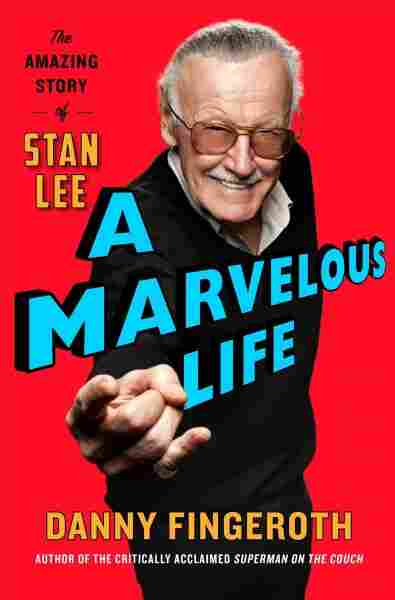 The Amazing Story of Stan Lee

In 2018, Marvel Studios released Black Panther. The film grossed 1.3 billion dollars and was nominated for 7 Oscars including Best Picture (a first time for a superhero film).

Beyond the money and awards, the release of Black Panther was a global event. The story of a super-powered African king, leader of the most technologically advanced nation on Earth, allowed the film to address racism and the history of colonial oppression in entirely new and unexpected ways. If anyone was still raising questions about comics mattering for culture, Black Panther meant the definitive end of the argument. Marvel comics and their characters were culture.

So how did we get here? How did superhero comics, the supposed realm of nerdy teenagers, end up conquering the world?

The answer, in many ways, comes down to a single name — Stan Lee. Across a lifetime of creativity, collaboration and endless hustle, Stan Lee saw possibilities no else could imagine and made them real. And if you want to understand how Lee and Marvel did it, Danny Fingeroth's new book A Marvelous Life is the place to start. As a lifelong fan of Spider-Man, The X-Men, Star-Lord and the rest, it was delightful introduction to a guy I'd never met but felt I'd known my whole life.

Fingeroth, who did his own award-winning time at Marvel, begins by laying out the contours of Stan Lee's early life as the son of a Jewish New York immigrant family (Lee was born in 1922 as Stanley Martin Lieber). Through the 1950s, Lee managed to build a solid if unimpressive career working in comics. But then in the late 1950s, the comics industry crashed as TV gave teenage boys a different venue for their interests. By 1960, Lee felt stymied and trapped. He was planning on quitting comics once and for all to do something "important." It was that frustration that led Stan Lee to what Fingeroth calls "a midlife crisis heard 'round the world."

Seeing that other publishers were having some success reviving superhero teams, Lee's boss tasked him with coming up with a new comic. Lee took the assignment, but he didn't just want to create just another group of costumed do-gooders. Instead, he set out to imagine a different vision what it meant to be a superhero.

In this and the work that followed, Lee asked himself what would happen if an ordinary person got superpowers. Would it make their lives better or would it make them harder? What Lee was picturing were superheroes who weren't gods from another world or perfect, infallible examples of human righteousness. Instead, he wanted stories of flawed men and women, full of neurosis and anguish, who suddenly found they could fly or stretch or punch their way through brick walls. What would happen then?

What happened was The Fantastic Four. And then The Hulk. And then Thor and Spiderman and Doctor Strange and Iron Man and The X-men. Over the next few years, Lee along with the equally legendary Jack Kirby and Steve Ditko, managed to create a large fraction of what we now call the Marvel Universe. Many of the characters had huge, real-life challenges like Tony Stark (aka Iron Man) and his drinking problem. That meant these characters lived in a recognizable world. "I wanted to make it as realistic as possible" says Lee in an interview quoted in the book. "Instead of [superheroes] living in Gotham City or Metropolis, I felt I will have them live in New York City." Just as important, these new Marvel characters lived in the same world where they crossed paths, formed alliances (or broke them), had romances (and broke those too), all of which formed one, giant, seamless story.

It wasn't just the stories that were new. Lee saw something few others could recognize — a nascent adult audience for superhero comics. Rather than just a backwater of teenage fantasy, Lee understood that with the right stories, superhero comics could gain relevance in the rapidly emerging world of ever-present mass media. Then Lee went further. He not only saw the change coming, he understood how to become its personification.

Most folks only know Stan Lee through his charming and quirky cameos in modern Marvel films. But if you were serious about comics back in the day (for me "the day" was the mid-1970s when I was 11 years old), Stan Lee was a constant presence. One of Lee's great innovations in Marvel comics was to develop a relationship with his readers through the "Bullpen Bulletins." These were a kind of editor's news and information page where Lee drew back the curtain to let you see what was happening at Marvel's offices. And as Lee described it, something amazing was always happening including the occasional visit from a rock star or famous movie director who'd popped by to express their Marvel admiration.

That was Lee's genius. "Little by little [he] was making himself and Marvel into celebrities" writes Fingeroth. By becoming a regular presence within Marvel's pages Lee was "mythologizing what he and his peers did for a living, making himself and them as important as the characters whose stories they told." But Lee was making us, his readers part of that story too. He was convincing us that we, too, were part of something very important just by buying those slim volumes of The Avengers, Silver Surfer or Nick Fury and His Howling Commandos.

A Marvelous Life gives us strong insights into the forces that drove Lee and Marvel to success. But Stan Lee was also a complex man who could be both beloved and reviled. In particular, Lee's conflicts with collaborators, who felt he had stolen credit for their work, is also an important part of his story. This was particularly true for Jack Kirby. Fingeroth spends some time in the book unpacking Lee's long running dispute with Kirby and others. He also mentions abuse allegations previously noted by media. These sections were not particularly compelling to me, but they are an important part of Lee's legacy and Fingeroth handles them with grace.

One small criticism of the book is that it tells us very little of Lee's response to the founding and runaway success of Marvel Studios (beginning with Iron Man in 2008). That seems a strange omission given how much of Lee's later story is him trying to get Hollywood to pick up Marvel properties.

Taken as a whole though, A Marvelous Life is a must-read for anyone who wants to understand how Stan Lee set Marvel on the path to world domination (in a good way).