Accessibility links
Mormon Family Mourns Their Dead In Mexico, Calls For U.S. To Rein In Its Guns A relative of the three women and six children who were killed tells President Trump to stop U.S. "loopholes from systematically injecting high powered assault weapons to Mexico." 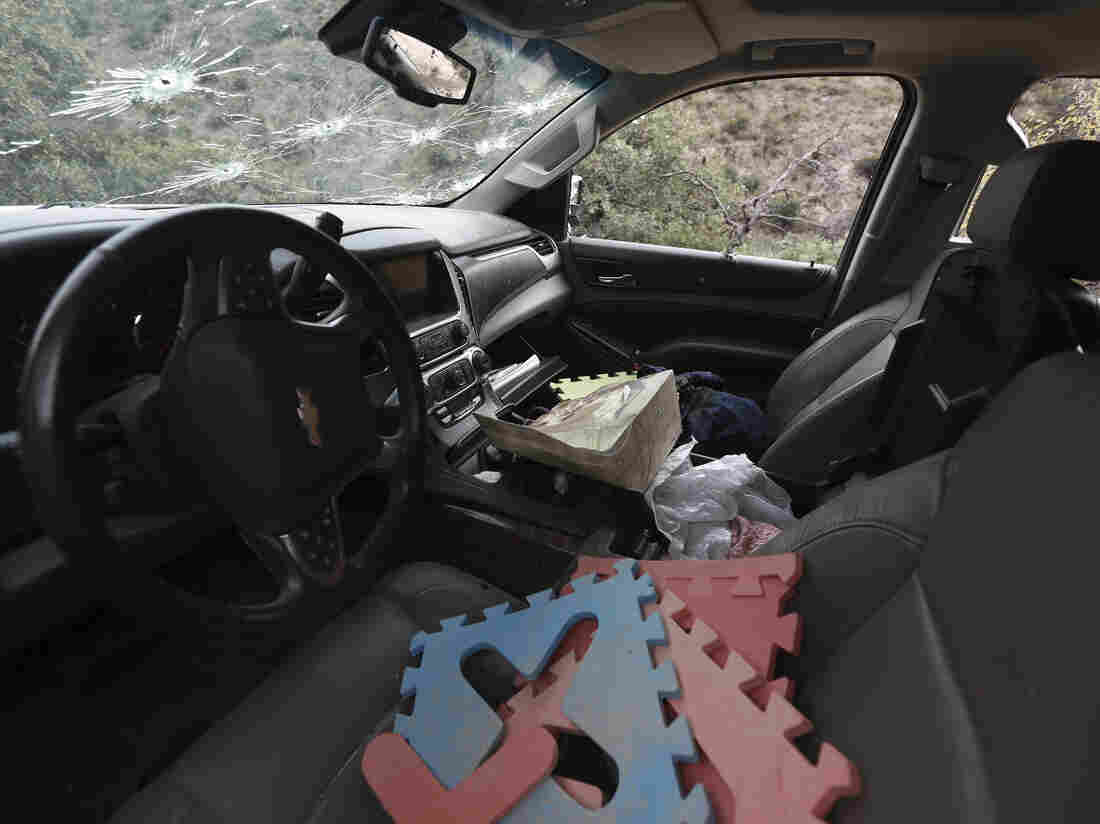 Foam puzzle pieces sit on the driver's seat of the bullet-riddled Suburban that had been driven by a member of the LeBaron family. Christian Chavez/AP hide caption 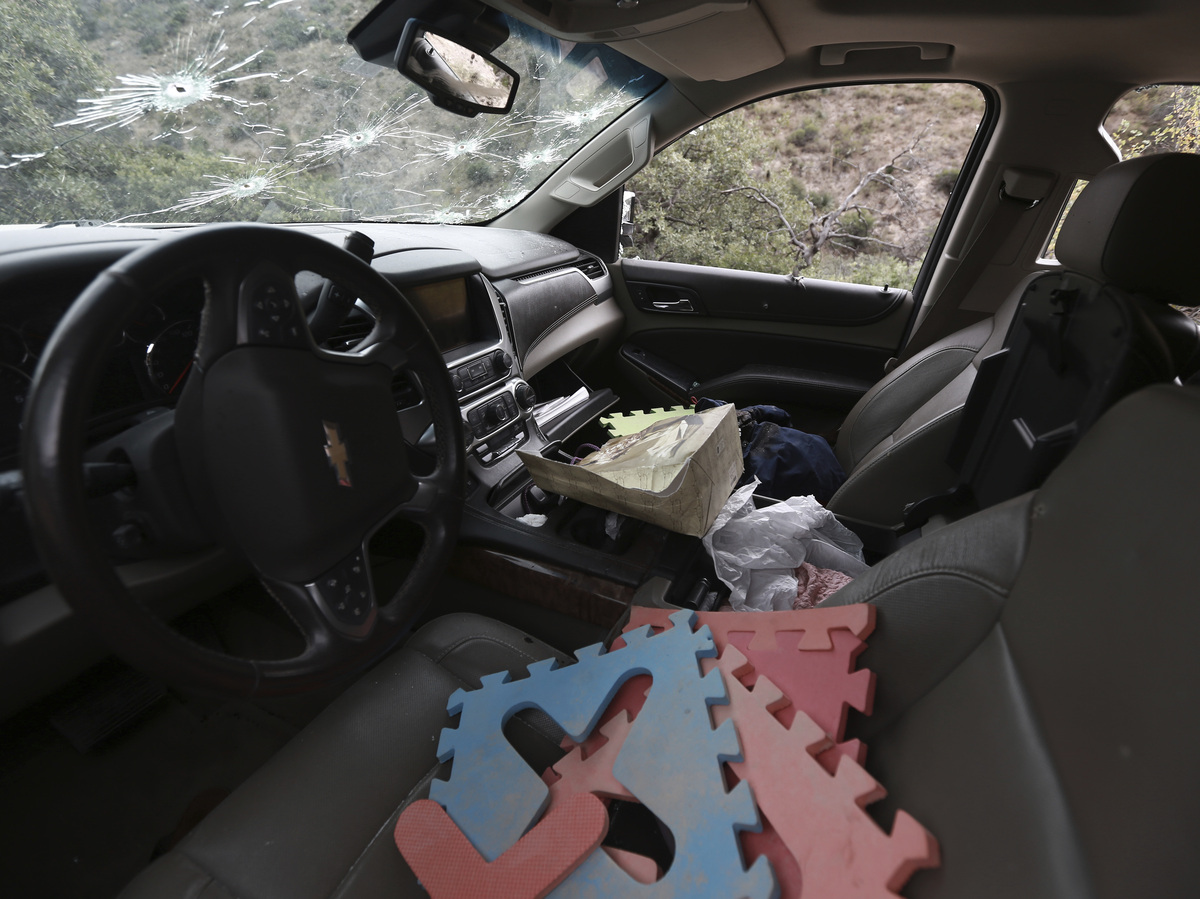 Foam puzzle pieces sit on the driver's seat of the bullet-riddled Suburban that had been driven by a member of the LeBaron family.

Several members of the extended family of Mormons whose relatives were attacked in northern Mexico on Monday are speaking out, saying it's time to reject gang violence. As family members prepare to bury the nine victims killed in that attack, they also say both the U.S. and Mexico should be part of the solution.

President Trump has extended his condolences to relatives of victims — three mothers and six children, all U.S. citizens — on Tuesday. But it was Trump's offer to help by sending the U.S. military into Mexico that drew a response from both the family and Mexico's government.

"This is a grave problem we have in the country, the smuggling of arms, particularly from the U.S.," Security Minister Alfonso Durazo said in an update on the case Wednesday morning. Of the flow of weapons from the U.S., he added, "it's what has allowed the criminal groups to increase their firepower."

Alex LeBaron, one of the slain family members' relatives, used Twitter to relay a more direct response to Trump.

"Want to help?" LeBaron asked in a tweet addressed to the president. "Focus on lowering Drug Consumption in U.S. Want to help some more? Stop the ATF and Gun Law loopholes from systematically injecting high powered assault weapons to Mexico. "

Last year, Mexico reported a record 33,341 intentional homicides — a 15% increase over the previous year. In 2019, criminal organizations have continued to operate with seeming impunity — including an incident last month when security forces retreated from a massive gunbattle that broke out when authorities tried to arrest a son of the imprisoned kingpin Joaquín "El Chapo" Guzmán.

For years, many Mexican politicians have believed, as NPR's Jason Beaubien reported in 2010, that Mexico's incredibly violent drug war is "fueled by U.S. demand for narcotics, fought with weapons from U.S. gun shops, and funded by U.S. cash that flows freely across the border."

When the U.S. performed its own tally of illegal guns that were seized in Mexico, the Government Accountability Office reported that more than 73,000 weapons seized in Mexico from 2009 to 2014 were traced back to the U.S. About half of those were long guns. But officials on both sides of the border also said they were seeing unfinished gun parts — which aren't covered by the U.S. Gun Control Act — leaving the U.S. for Mexico, where they can easily be assembled into finished weapons.

"We're joined by a hip on this. This is a problem for both countries," another family member, Daniel LeBaron, says in an interview with KJZZ's Fronteras Desk. Acknowledging the cartel violence that claims thousands of lives each year, LeBaron adds, "Maybe now with the face of Americans being murdered, it brings it closer to home that this is a serious problem." 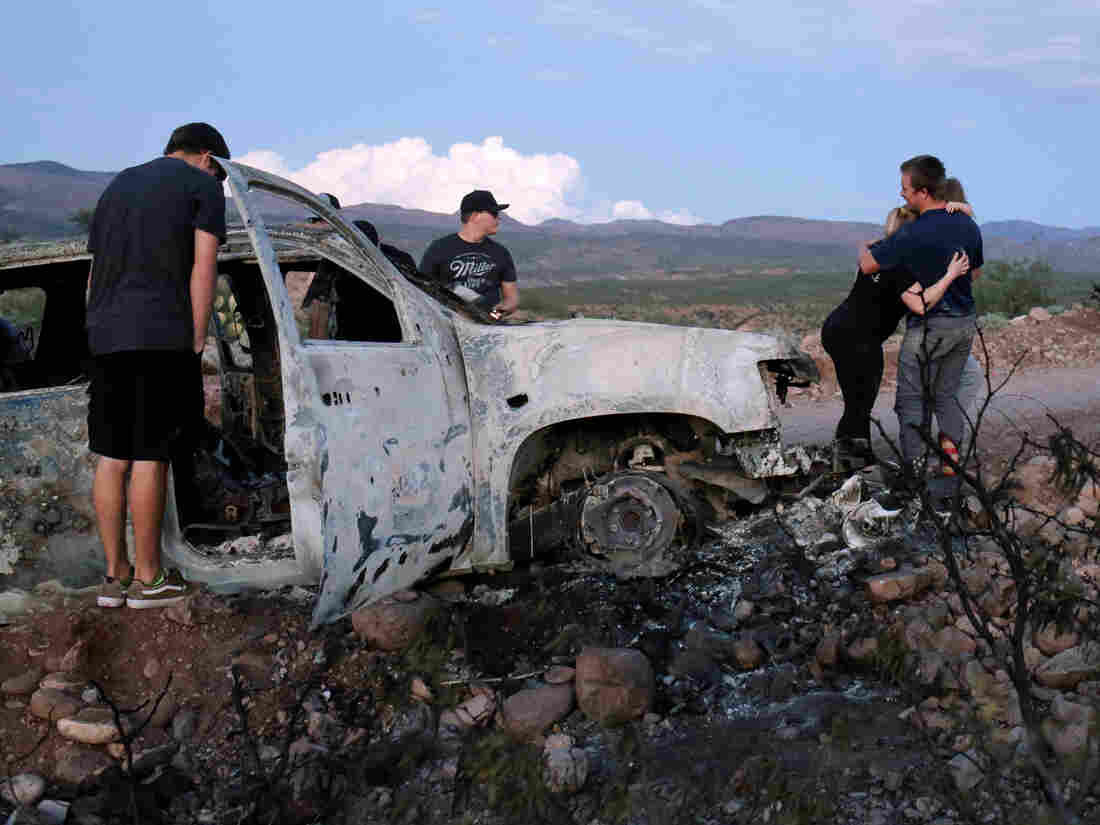 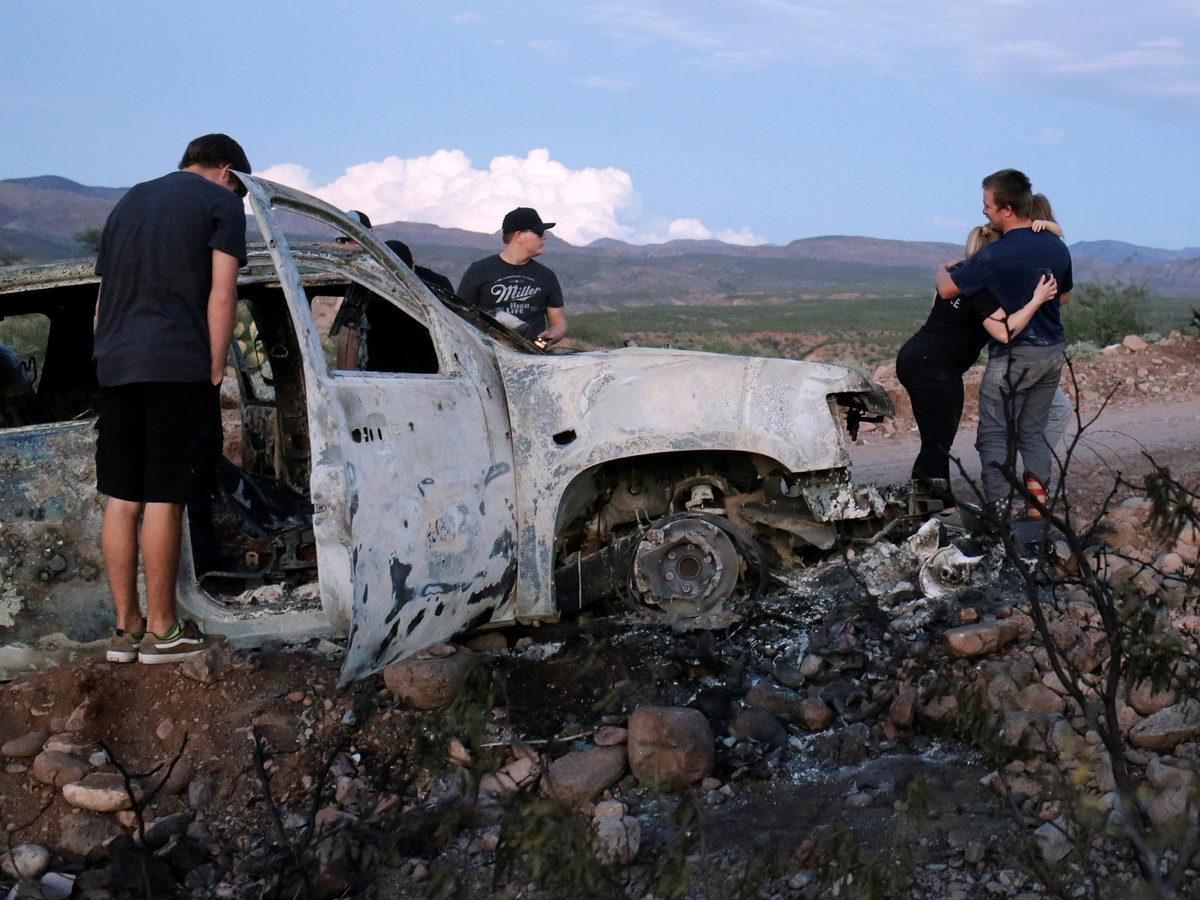 Relatives of slain members of Mexican American families belonging to Mormon communities visit the burned wreckage of a Chevrolet Tahoe where five of their relatives died in northern Mexico.

Mexican officials say they're still trying to determine whether the group was targeted or whether they were the victims of mistaken identity. The large Mormon community lives in an area just south of Arizona where rival cartels are currently at war, fighting to secure smuggling routes close to the U.S. border. But citing the intensity of the attack, relatives say the criminals intentionally killed carloads of women and children.

Lenzo Widmar, whose cousin Rhonita Maria Miller was killed along with four of her children, tells Mexican media outlet Milenio, "We are a family of more than 5,000 members in our communities and our roots are already very planted here in Mexico."

"We have no plans to leave," he adds.

Another relative, anti-violence activist Julián LeBarón, tells Milenio that he doesn't care whether the U.S. or Mexico lead the inquiry into the killings, as long as justice is served.

The shocking attack is putting new pressure on the nonconfrontational policies of López Obrador, who has often insisted that social changes, not violence, will win the drug war. He's now defending that strategy, which he has often summed up in short phrases, from "Hugs, not bullets" to "We can't fight fire with fire."

However, the official response to the killings turns out, relatives say they're not leaving the community they call home.

"We are coming together as a community to deal with it. We've been here for five generations. Most of us have blood from both places. And we're no we're going anywhere," Daniel LeBaron tells Fronteras. "We're going to fight this. We're going to stand up to whatever we have to stand up to."

Discussing the thousands of innocent people who are affected by cartel violence annually in Mexico, Daniel LeBaron says the killings are fueled by "fundamentally flawed policies" in both the U.S. and Mexico.

The women and children were attacked Monday morning as they drove three SUVs between the states of Sonora and Chihuahua. In one spot, authorities found a burned-out Chevrolet Tahoe with five bodies and multiple bullet holes. Farther down the road, they found two Chevy Suburbans with more bodies. In what the family calls a small miracle, several children survived the assault, including a 7-month-old girl.

Several details about the attack have changed as the authorities investigate. For example, after initial reports that the three women had been driving in a small convoy when they were attacked, federal officials said Wednesday that the first vehicle was fired upon more than an hour before the other two. 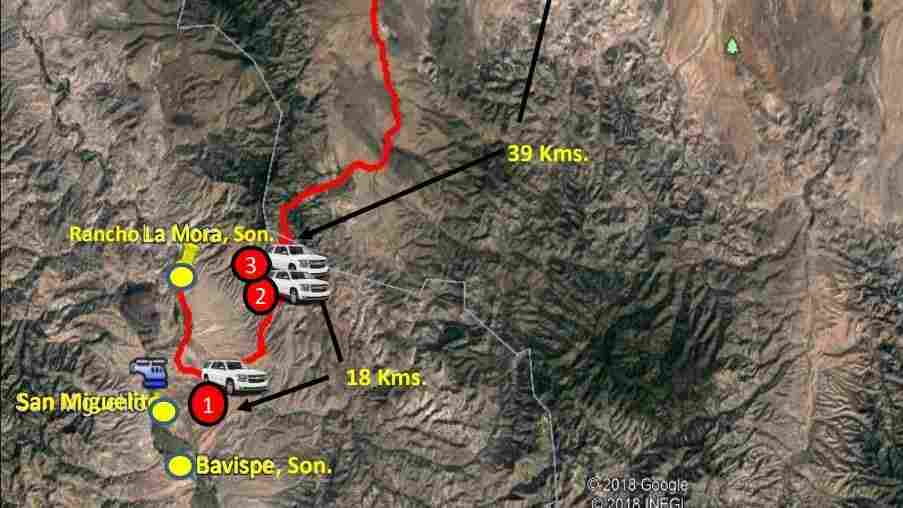 A map handed out by Mexico's federal government Wednesday shows the locations of three vehicles driven by women who died in a brutal attack this week. Six children also died, and others were wounded. Mexican government handout hide caption 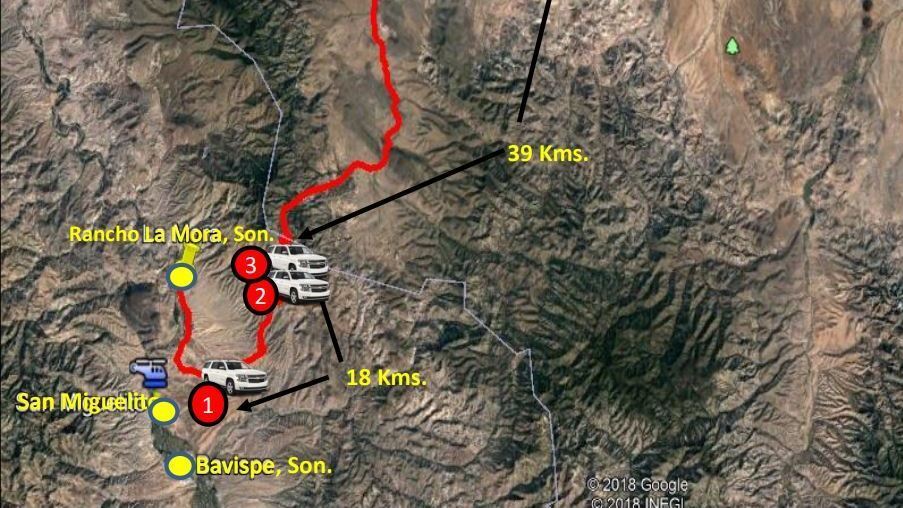 A map handed out by Mexico's federal government Wednesday shows the locations of three vehicles driven by women who died in a brutal attack this week. Six children also died, and others were wounded.

News of the attack has been steadily relayed on Facebook by Jhon LeBaron, whose aunt, Dawna Ray Langford, died along with two of her children. His postings and updates have included heartbreaking photos of the children who died and scenes from the sites on the road where the attacks took place.

"The response I got from this posting was truly quite overwhelming," Jhon LeBaron said Wednesday, thanking those who helped get the word out about his family's horrible loss.

"My brain is in a fog. And as a family we're working thru this," he said. "Justice must be served for this horrendous crime. My family is in the process of planning funerals for these beautiful souls."

The victims are part of the extended LeBaron family, members of which have lived in northern Mexico for decades since splitting off from the Church of Jesus Christ of Latter-day Saints following its move away from polygamy. That rift began in 1890; this week, the Utah-based church said that while it mourns those who were killed or hurt in Sonora, it doesn't consider the victims to be members of the church.

In religious terms, the best way to refer to the victims and their relatives is as independent Mormons, says Cristina Rosetti, a scholar of Mormon fundamentalism, in an interview with member station KUER in Utah.

The attack unfolded near the town of Bavispe, close to the family's La Mora ranch. In a visit to that area late Tuesday, Mexico Foreign Relations Secretary Marcelo Ebrard called the brutal attack "an atrocity that cannot be allowed."

Of the Mormons who live in that area, Ebrard said they are a binational community that is "very respectable and beloved in Mexico."

He added, "They are part of our people."