Accessibility links
Review: World War II Film 'Midway' Is Middling Roland Emmerich's CGI-heavy depiction of the WWII battle that turned the tide in the Pacific isn't boring, but it's familiar beats ensure it's more a movie about war movies than it is about war. 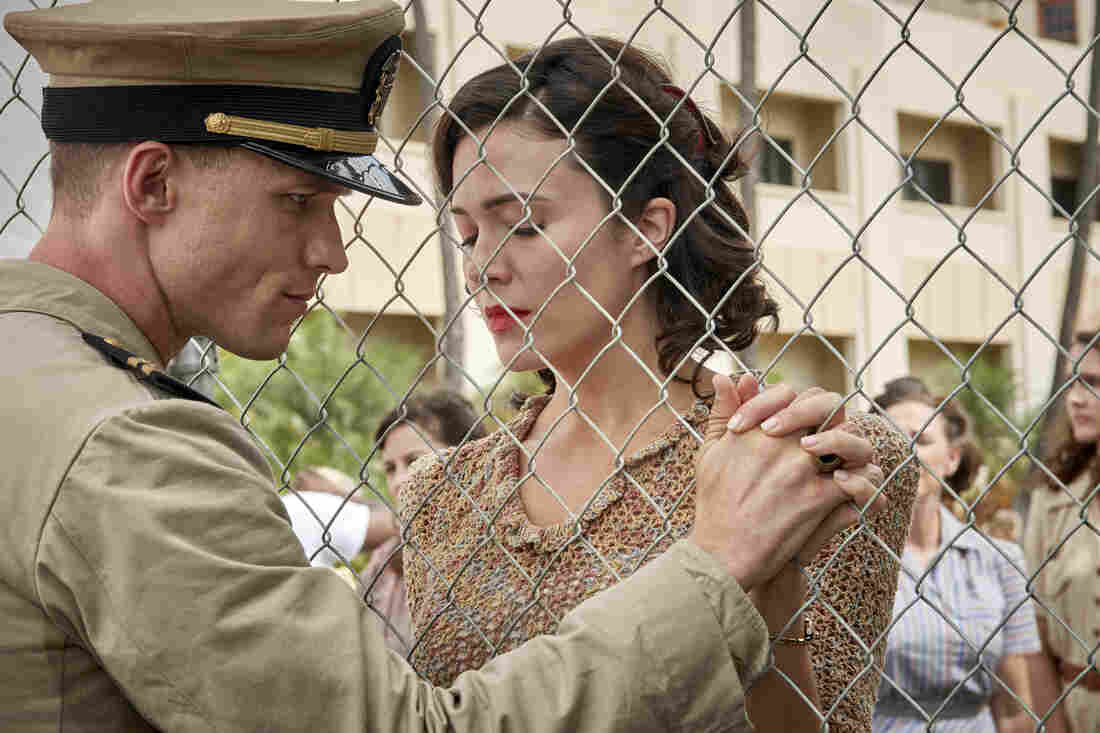 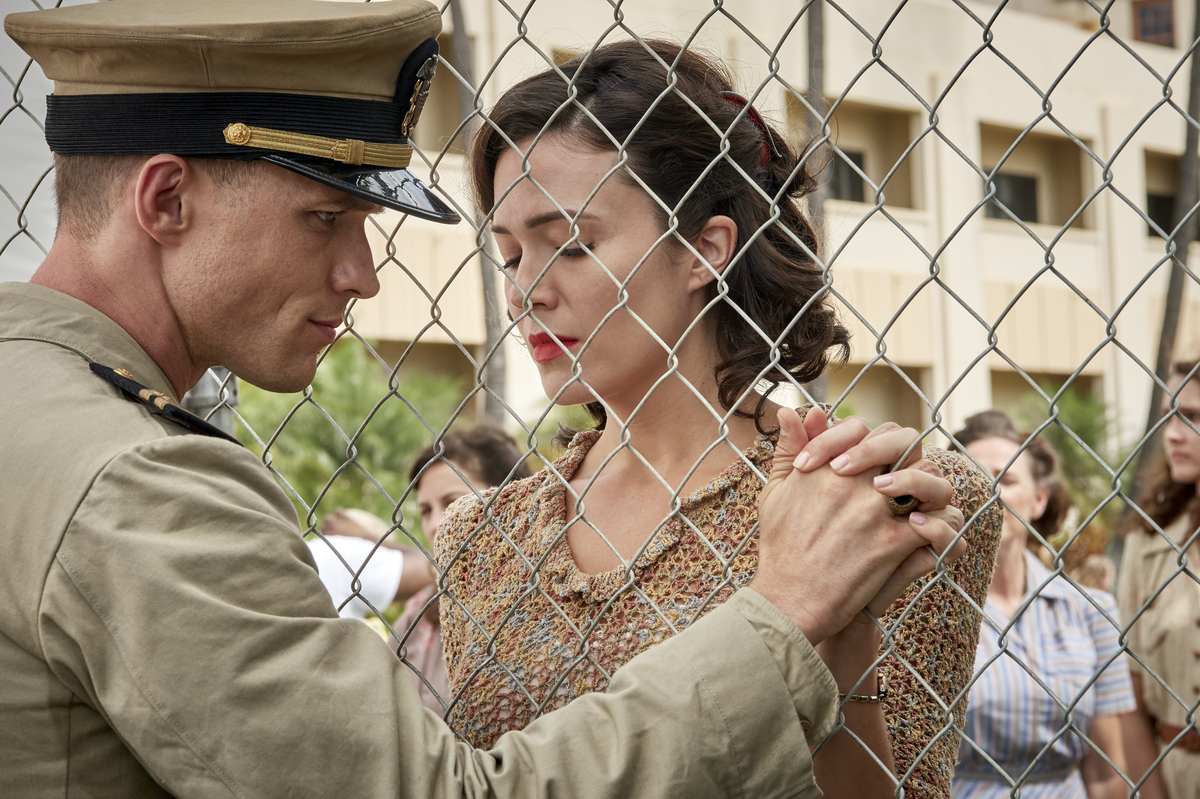 The 1942 victory the U.S. Navy won against a numerically superior Japanese force at Midway Atoll was fresher in memory to the audiences that made the Technicolor-Sensurround sensation Midway a hit in the bicentennial summer of 1976 than that hokey movie is to us now. The three-day battle by air and by sea was such a tide-turning triumph for the United States that it's surprising there have only been three movies named for it in 75 years. The first was an 18-minute documentary shot by Hollywood legend John Ford, who took some shrapnel in his arm while filming what historian Mark Harris called "the rawest battle footage American cameras had yet captured."

Roland Emmerich is no John Ford. But he's enough of a student of film history to have hired a lookalike actor to play John Ford, and to make him shout "Shoot the damn picture!" at his cameraman as explosions shake the earth beneath them, in his all-new, somewhat-different Midway.

If there's one filmmaker who has proudly carried on the tradition of cornball spectacles full of rising nobodies and fading stars — movies like the 1976 Midway, directed by World War II veteran Jack Smight and starring World War II veterans Charlton Heston, Henry Fonda, Glenn Ford, and Cliff Robertson — it's Emmerich. The German disaster artist who brought you Independence Day has destroyed the White House on film not once, not twice, but three times. (Maybe that's why he was forced to shoot a lot of this movie in Montreal.) There's a certain brute efficiency to Emmerich's filmmaking that makes his stuff seductively watchable no matter how dumb it is. And Midway is a long way from the dumbest film he's ever made, which is an equally long way from saying it's good. It's ... middling. But boring? No.

Working from a screenplay Wes Tooke, Midway gives us the naval war in the Pacific on fast-forward, covering the Japanese attack on Pearl Harbor, Jimmy Doolittle's reprisal raid on Tokyo four-and-a-half months later, and finally, the Battle of Midway, all in just a little over two dateline-title-card-punctuated hours.

Though the production had the cooperation of the Department of Defense and was allowed to shoot on location at Joint Base Pearl Harbor-Hickam near Honolulu, it's still heavily reliant on CGI to stage its giant battle on a budget —Midway '19 cost about half what Christopher Nolan's Dunkirk did, and looks it. The animation isn't quite as dodgy on the big screen as it appears in the movie's ads, though.

The 1976 Midway followed several made-up characters, while pretty much everyone we get to know in the Emmerich version is a real historical figure. The photos of the veterans we're shown just before the end credits confirm what any viewer will suspect: The steadfast and resolute men, American and Japanese alike, whose gallantry Emmerich and Tooke recount with such gleaming reverence, did not have the angular jawlines of the actors who stand in for them here.

It comes down to a battle of who has the most aggressively protruding chin. Given the pure quantity of jaw-clenching he fits into just a few minutes' screen time, I'm going to give the facial-hypertrophy trophy to Aaron Eckhart as Doolittle, a flying legend previously embodied onscreen by Spencer Tracy and Alec Baldwin. (Good actors, so-so chins.) Eckhart faces some stiff competition in the chin race from Ed Skrein, the English actor who sports a hilariously ovah-dah-towp New Jersey accent as Dick Best, the fearless bomber pilot who scored a direct hit against the Akagi, one of four aircraft carriers that the Imperial Navy lost in the fighting.

One must also consider Dennis Quaid, as the growling Admiral William "Bull" Halsey, and Luke Evans as air group commander Wade McClusky, who's possessed of not only a magnificently tectonic jaw, but also a pencil-mustache rivaled only by the stache' worn by Nick Jonas as machinist Bruno Gaido. When Gaido hops into the gunner's nest of a grounded airplane to protect his ship, the carrier Enterprise, from an attempted kamikaze attack, it looks like the kind of fantastical derring-do we expect from, well, Emmerich movies. But but the real-life Gaido really did this, and a later, more personally costly feat of heroism earned him a posthumous Distinguished Flying Cross. (To compare apples to apples, Jonas fits in just as well with all the other sailors as Harry Styles did in Dunkirk.)

None of the other actors playing Americans — Woody Harrelson as Fleet Admiral Chester W. Nimitz, Patrick Wilson as Naval Intelligence officer Edwin Layton — can compete in the jaw game, but they do their jobs. Wilson performs a scene in Japanese opposite Etsushi Toyokawa (as Admiral Isoroku Yamamoto) in the movie's prologue, set in Tokyo in 1937. That's not something a version of this movie made in the 1940s would have given us. It's worth pointing out that the principal Japanese officers here are historical, too, and played by Japanese actors speaking subtitled Japanese: Jun Kunimura as Chūichi Nagumo; Tadanobu Asano as Tamon Yamaguchi; Nobuya Shimamoto as Kaku Tomeo. Midway '76 cast Japanese-American actors — with the notable exception of Toshiro Mifune as Yamamoto — and had them speak English. (Mifune was dubbed.) But it depicted them as honorable, and the new Midway does, too.

Tooke's I-always-say-exactly-what-I'm-thinking dialogue ("You always wanted to be a hero; now's your chance!" "I nevertheless know the fighting spirit of these men.") demands a certain technical stoicism, and everybody here has got it. If anything, they seem excited to find themselves in what amounts to a supercut of every World War II flying movie ever made. Whenever Skrein fires up his SBD Dauntless, tucks a snapshot of his best girl into the instrument panel, and pops a stick of gum into his mouth, he's honoring a proud tradition. To invert what Francis Ford Coppola once said about his long-delayed Vietnam War epic Apocalypse Now, Emmerich's Midway isn't a movie about World War II. It's a movie about World War II movies.