Accessibility links
In German Coal Country, This Former Socialist Model City Has Shrunk In Half Thirty years after the Berlin Wall fell, Hoyerswerda is struggling to thrive, a far-right party has gained popularity and many residents worry about the future when Germany phases out coal. 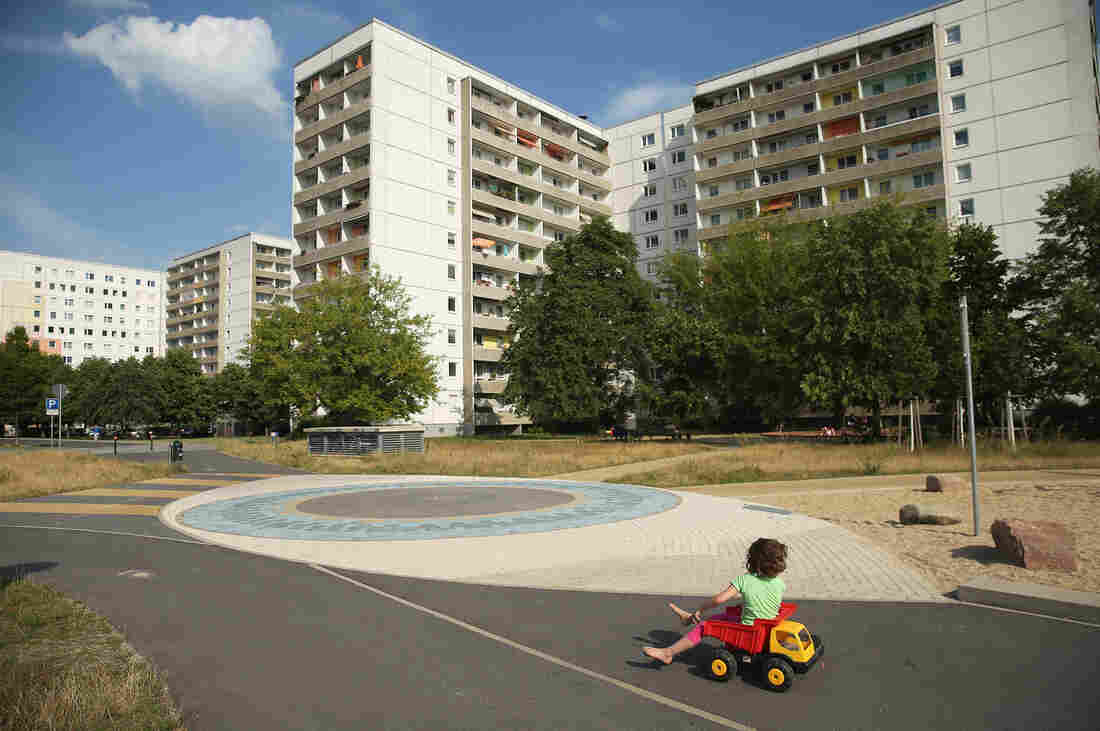 A child plays near communist-era apartment blocks in Hoyerswerda, Germany. After the collapse of the communist East German government that had redeveloped the area into an industrial hub, factories shut down and coal production declined. The population has sunk below 33,000 — about half its size before the fall of the Berlin Wall. Sean Gallup/Getty Images hide caption 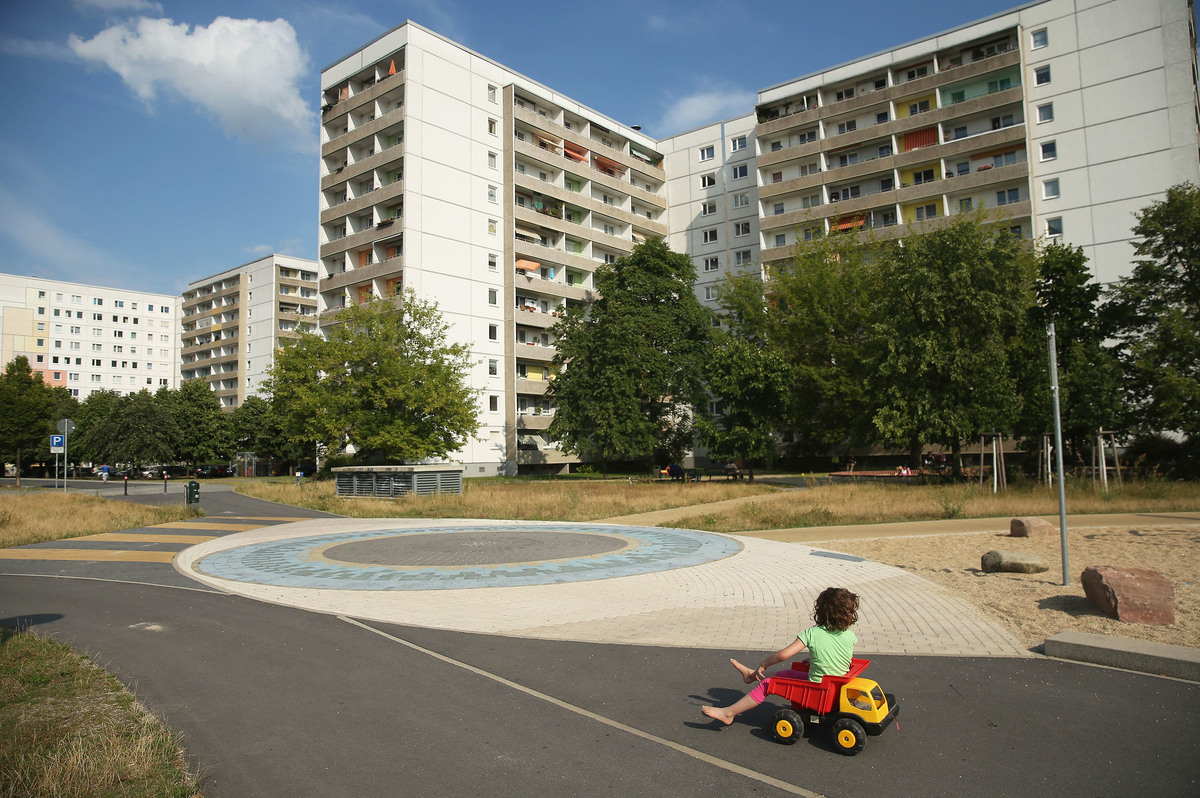 A child plays near communist-era apartment blocks in Hoyerswerda, Germany. After the collapse of the communist East German government that had redeveloped the area into an industrial hub, factories shut down and coal production declined. The population has sunk below 33,000 — about half its size before the fall of the Berlin Wall.

It was two years after the Berlin Wall had fallen when Karsten Hilse realized the people in his town had changed. It came to him in a blast of hot, white light.

"It was the first time that a firebomb was thrown at me," Hilse remembers. "Things like that didn't happen in the GDR."

Hilse was a young police officer in his hometown of Hoyerswerda, in the former East Germany, also known as the German Democratic Republic or GDR. In 1991, a year after Germany reunified, rioters in the city targeted immigrants from countries such as Vietnam and Mozambique, accusing them of taking jobs away from Germans. Hilse, dressed in riot gear to fend off the attackers, suddenly didn't recognize Hoyerswerda, a city where, just a few years prior, work was plentiful and most people made the same salary.

"If you don't have enough — if you've lost your job, and when everything that you'd hoped and wished would happen with reunification fails to materialize ... and you all of a sudden have all of this freedom, but not enough money to actually use it, that's really very frustrating," says Hilse, now 54 and a member of German parliament. "That makes it so that people are looking for someone to blame."

As Germany celebrates the 30th anniversary of the fall of the Berlin Wall this week — and the end of a divided state that followed — cities in the former east such as Hoyerswerda are still struggling to thrive, evidence that in a country united for nearly three decades, divisions between east and west still exist.

"This large power plant, this gas separation plant, the world's largest, needed an unending supply of workers," says Kirstin Zinke, director of the Saxon Museum of Industry at Knappenrode, outside Hoyerswerda.

In the late 1950s, architects were brought in to plan a socialist utopia based around the coal industry, including large state housing for workers and green spaces for their families.

"This new town was meant to be a true socialist new city that stripped away the trauma of two World Wars that affected everyone in the '50s. It was supposed to imagine this truly socialist and just future society." 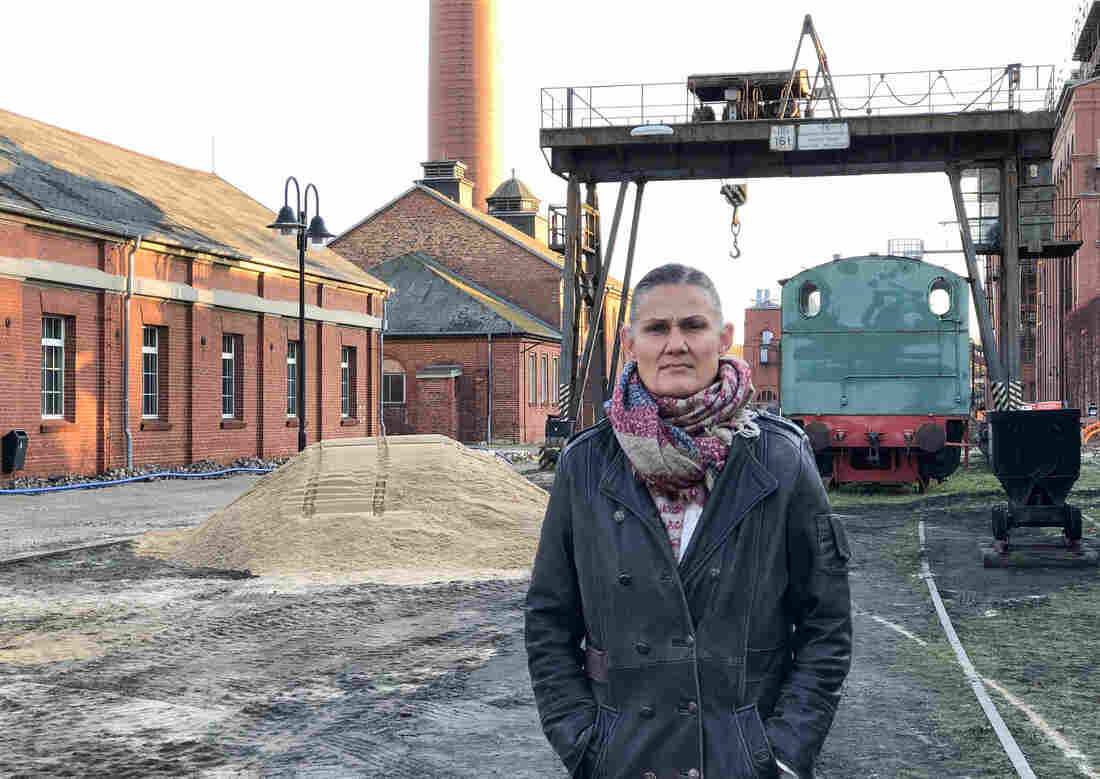 Kirstin Zinke stands in front of the Knappenrode museum, where she is the director. Rob Schmitz/NPR hide caption 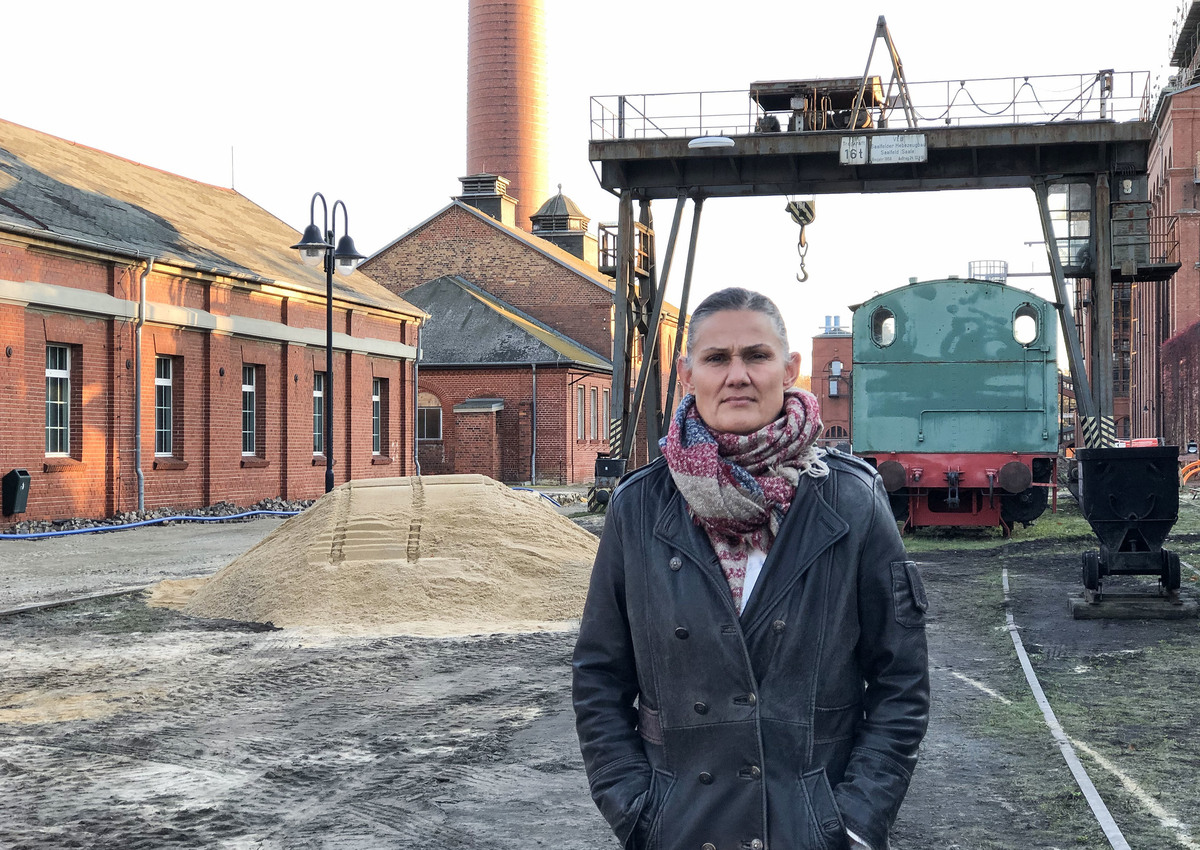 Kirstin Zinke stands in front of the Knappenrode museum, where she is the director.

In November 1989, the Berlin Wall fell, and soon after so did the communist state, a satellite of the Soviet Union. The rapid switch to capitalism changed the celebrated status of the worker, according to the museum director.

"It was exactly this person, who was so idealized until 1990, who was always placed on a pedestal, who from one day to the next became the pariah of the nation," Zinke says of the figure of the laborer.

Many here long for the times before reunification because they were doing a lot better.

Madlen Krenz, a laid-off coal mine employee who runs a food bank

Then the city's population plummeted. What was a communist industrial hub of nearly 70,000 people in 1987 has now lost over half its population, as residents have looked for jobs elsewhere. Today it has fewer than 33,000 people, according to federal statistics. The anthropologist Felix Ringel has called it "Germany's fastest-shrinking city."

Some of those who remain convey some nostalgia about the notorious former system. Madlen Krenz, 52, lost her job in one of the many rounds of layoffs at the former state coal mining company, Schwarze Pumpe. "Many here long for the times before reunification because they were doing a lot better," she says. "You didn't have to consider anything — you really just lived your life on a sedated path. Nowadays you have to worry about your job. You're scared that you could become sick for a long period of time. It wasn't like that in the GDR."

After years of trying to find work, Krenz became the director of a local food bank. For a small entrance fee, people who make less than 1,000 euros ($1,105) a month stock up on produce, meat and baked goods.

"No matter how you look at it, the money isn't enough, so I have to come here," says 38-year-old Roland Scholz, one of an estimated 600 people who depend on the food bank.

Scholz is raising four children here, and he worries about their future. He says crystal meth is a big problem in the city, and his kids don't have much to do. "When I was a kid, I played outside all day with my friends until the church bell rang and I had to come home," he remembers. "In Hoyerswerda [nowadays], you hope and pray your kids come back unharmed."

That's why social worker Irena Kerber organizes soccer matches for at-risk teens. "Some of these kids have some idea for what they'd like to do with their lives, but most just sit in front of the computer or the TV," says Kerber, as she plays goalkeeper in a pickup game. "For most, this is the one thing that they have in terms of some sort of playground activity."

But the future isn't totally bleak for these children, according to Mirko Kolodziej, a local journalist for the Hoyerswerdaer Tageblatt newspaper. The city's jobless rate is at a 30-year low of 6.6%, although that is about twice the national rate. Local employment options include a hospital and a range of medium-size companies. Kolodziej says many fellow citizens are now focused on urban gardening and activities for young people. 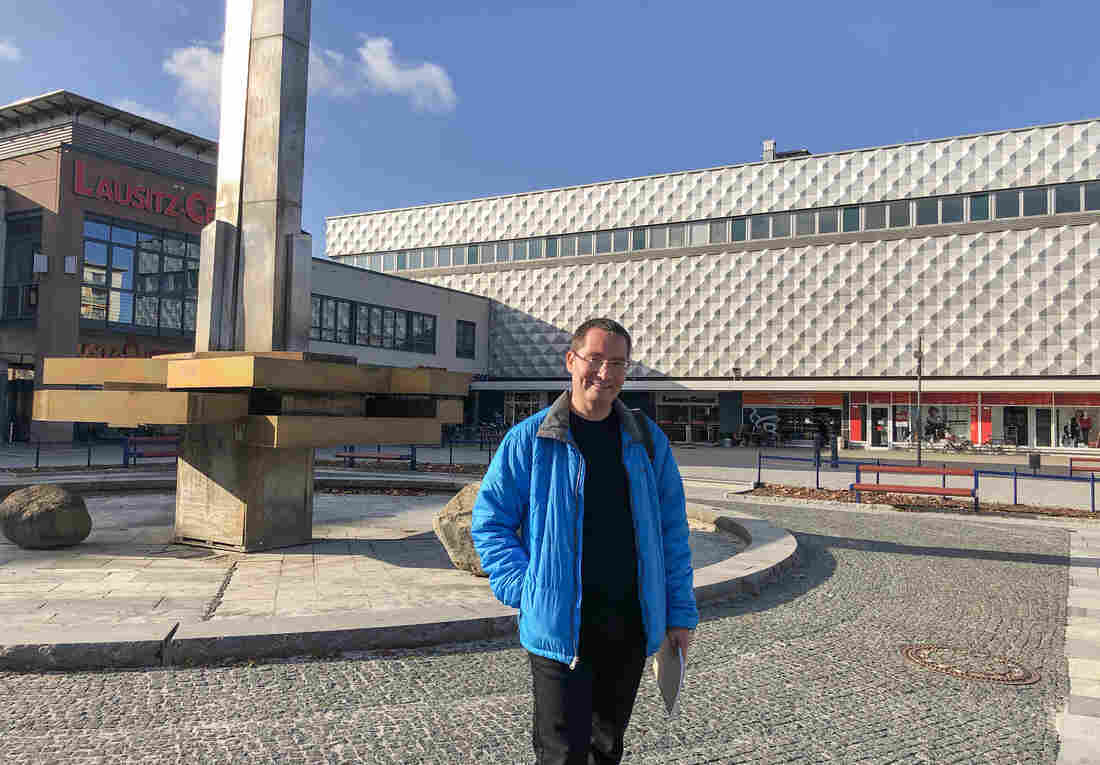 Mirko Koloziedj, reporter for the Hoyerswerdaer Tageblatt newspaper, stands among buildings constructed during the city's boom in the 1960s. Rob Schmitz/NPR hide caption 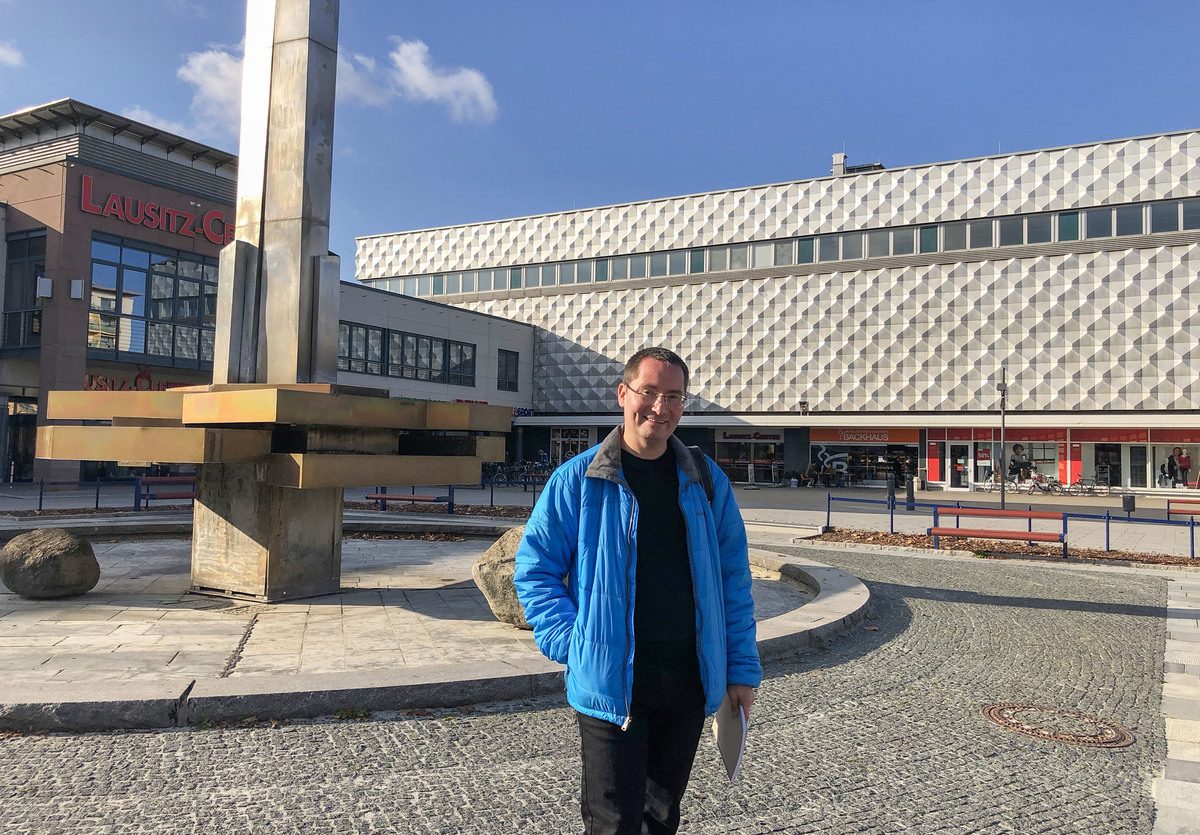 Mirko Koloziedj, reporter for the Hoyerswerdaer Tageblatt newspaper, stands among buildings constructed during the city's boom in the 1960s.

You can be happy in a shrinking city.

"We are kind of an example that you can be happy in a shrinking city. We started a lot of cultural projects here and community work and a lot of different projects to try and bring people together," he says.

But for Jens Dubrau, head of the local coal miners' union, more needs to be done for Hoyerswerda. "Our concerns are essentially the same ones we had after unification in the '90s: that jobs will disappear," says Dubrau. "The federal government has already decided that Germany is finished burning coal. But they haven't offered any alternatives."

Dubrau stands underneath the large cooling towers of Schwarze Pumpe, the facility around which communist-era Hoyerswerda was built. Germany's government decided earlier this year that the country will stop burning coal by 2038. It has plans for alternative energy sources such as gas, wind, solar and hydropower but critics in coal country say this won't be enough.

The cut-off date also worries Hilse, who represents Hoyerswerda in German parliament in Berlin. "It's a catastrophe," he says.

Hilse questions the science behind cutting out coal use, a high carbon emitter that contributes to climate change. He is a member of the Alternative for Germany, or AfD, a political party criticized for hosting climate change deniers and anti-immigrant sentiments. The far-right party's popularity has surged in states such as Saxony, where Hoyerswerda is located.

Hilse shrugs off the criticism to focus on what he says is a crucial energy policy mistake. The plan to shut Germany's nuclear and coal power plants, he argues, will leave the country without enough electricity and will shed many jobs. He estimates it will lead to 25,000 lost jobs in Germany's coal industry, many of them in Hoyerswerda.

That, he says, will hurt a city that was supposed to be built for the well-being of its workers.

Austin Davis contributed to this story.