Accessibility links
Ban On High-Cost Loans May Be Coming Some payday loans carry interest rates of 100% or more. The Military Lending Act limits rates on loans to service members. Now, a bipartisan bill aims to extend that protection to all Americans. 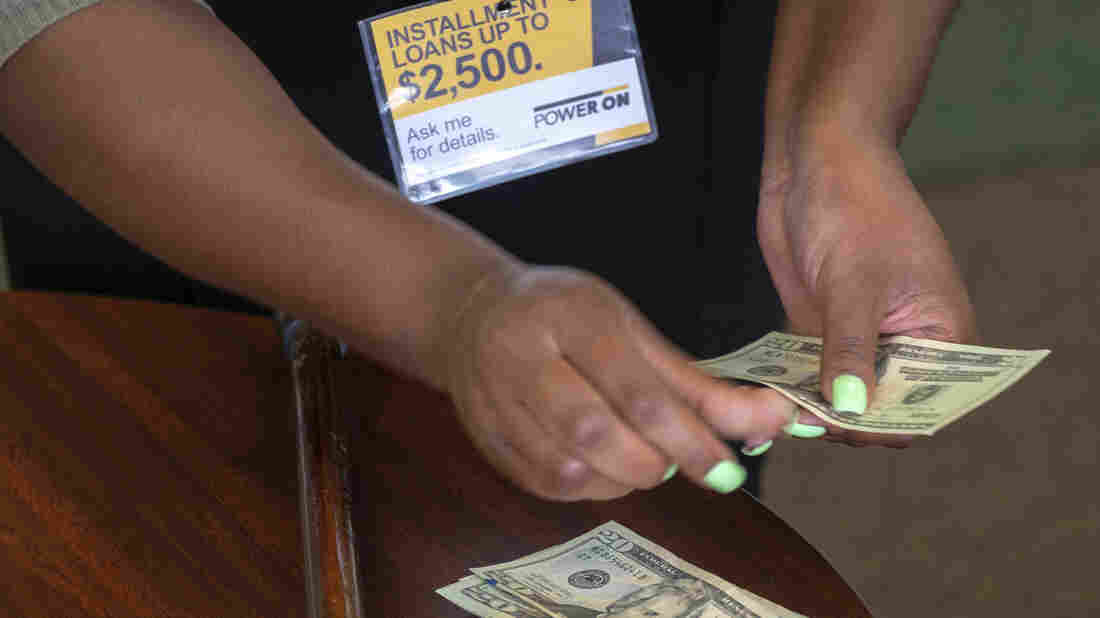 The Military Lending Act caps annual interest on loans to military members at 36% and offers other safeguards. Now, lawmakers are proposing to extend that protection to veterans and others. Sid Hastings/AP hide caption 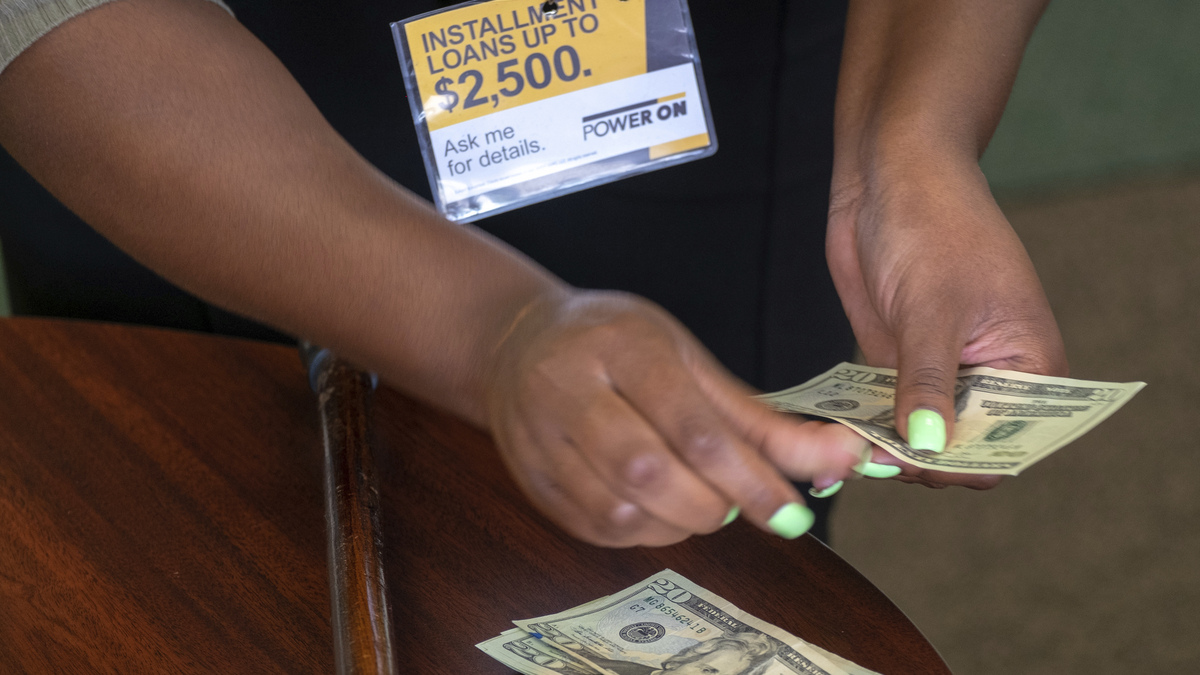 The Military Lending Act caps annual interest on loans to military members at 36% and offers other safeguards. Now, lawmakers are proposing to extend that protection to veterans and others.

A few years ago, money was very tight for Chasity Wohlford. The Houston resident, who was working a low-wage job, needed to fly to Colorado for a family emergency. She says a friend told her, "Oh, just go to this payday lender. It's super easy." But Wohlford ended up over her head in debt after taking out that loan.

The U.S. military realized some years ago that a lot of service members were getting into serious trouble with payday and other loans with annual interest rates of 300% or higher. In 2006, President George W. Bush signed into law a measure that caps interest rates to protect active duty troops. Now, some members of Congress want to expand those safeguards to cover all Americans.

Wohlford says she thought she understood her loan. She borrowed $460 and she'd have to pay back $560. But Wohlford says that as she was going over the paperwork with an employee at the payday lender, "the lady was speaking so fast and was like, 'OK this, and this and this.' "

Wohlford says she was told she could make the payments over the next month instead of a week. But she didn't realize that piled on more interest and fees. She fell further behind. Eventually, she says she had to pay back about $1,200. That's nearly three times what she borrowed.

Digging out of the hole took eight months. "My rent got behind, my lights got cut off once, my cable got turned off and it went to a collection agency," she says. "It was just a mess."

Wohlford finally went to her employer to ask for money to get her electricity turned back on. "Imagine how embarrassing that was," she says, "to have to go to them and tell them that I can't take care of my home." 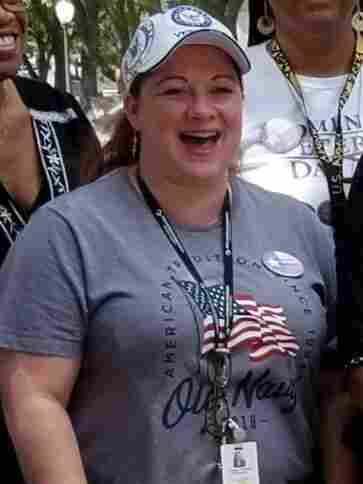 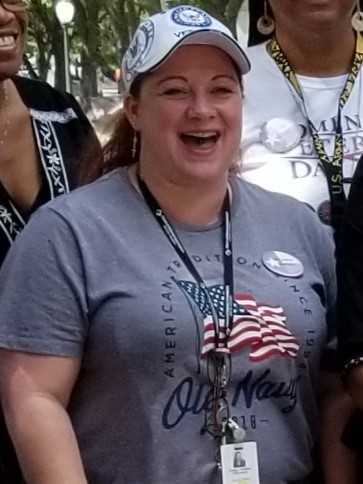 If Wohlford was active duty military, it would be illegal to give her a high-interest loan like this. And in fact, she is a Navy veteran. But vets aren't covered by those protections.

The Military Lending Act caps annual interest at 36% and offers other safeguards. The Defense Department said "predatory lending undermines military readiness" and "harms the morale of troops and their families."

Now, lawmakers are planning to introduce a bill in the coming days that would extend that protection to veterans such as Wohlford, and everybody else too.

"We're going to expand it to the rest of the country," says Rep. Glenn Grothman, R-Wis. He's joining four Democrats who will be introducing House and Senate versions of the Veterans and Consumers Fair Credit Act.

"It's hard to imagine who would want to take out a loan with an interest rate of of 150 or 200% a year," Grothman says. "There is no way that is in anybody's best interest at all, and taking advantage of people who are either in desperate straits or more likely just plain financially illiterate is immoral."

Sources tell NPR the Democrats who will join Grothman next week in introducing the bills are Sens. Jeff Merkley of Oregon, Sherrod Brown of Ohio and Jack Reed of Rhode Island, as well as Rep. Jesús "Chuy" García of Illinois.

But there is likely to be strong lobbying against a nationwide interest rate cap. The American Bankers Association has opposed the idea in the past, and lenders who make loans with high interest rates are already speaking out in dramatic terms.

"Our estimate is that this will redline 150 million Americans from access to credit," says Mary Jackson, the CEO of the Online Lenders Alliance. She says people need these loans. And yes, she says the interest rates are high — averaging more than 100% a year for the lenders she represents. But Jackson says that is justified by the risk that lenders take making these loans. She cites a World Bank policy paper that found while rate caps can prevent predatory lending, they can also have unintended consequences.

"Our customers are accessing our loans to solve an immediate problem that they have," Jackson says. "If their car breaks down it means they can't get to work, so these loans are very, very helpful." And she argues that a rate cap would take away access to these loans.

Another industry group, the Community Financial Services Association of America, which represents payday lenders, also opposes the idea of a national rate cap.

"Restricting access to legal and licensed credit does nothing to address the underlying need for small-dollar loan products and could force millions of people to seek out dangerous alternatives such as unscrupulous, unlicensed, offshore or otherwise illegal lenders," the group told NPR in a statement.

"There are so many other alternatives," says Graciela Aponte-Diaz with the nonprofit Center for Responsible Lending. "There are credit union loans," she says. "Families turn to nonprofits, to their churches." She says some nonprofits make small-dollar loans that most people can qualify for with much better terms.

Aponte-Diaz says there are subprime lenders who are providing loans under the 36% interest rate cap already, so they can make loans to service members or in states that already have rate caps. States that have passed rate cap legislation include New York, Massachusetts, Connecticut, Colorado, Arizona and South Dakota.

Aponte-Diaz disputes the claim that an interest rate cap would amount to "redlining" — denying access to credit in minority communities.

"For these guys to say that this is redlining, that is outrageous," says Aponte-Diaz. She says payday and online lenders with very high interest rates "are targeting African American and Latino families with these predatory loans."

She cites a study by her group that found after adjusting for income, "payday and car title stores were concentrated in communities of color."

Christopher Peterson is a law professor at the University of Utah who worked for the Defense Department to update the Military Lending Act rules five years ago. He has advocated expanding the protections and advised lawmakers on the new bill too.

Peterson says a nationwide rate cap would provide "a speed limit on these loans. It's not that credit would be banned, it just would say, 'Look, you can't drive this loan at 300% interest rates per year. Why? Because it's too fast, it's too reckless, it's too dangerous.' "

That sounds like a good idea to Wohlford, who wishes she never took out that loan. "When I heard about the payday loan, that was just something that I thought was going to be quick and easy," she says.

If she'd known what a mess she was getting into, Wohlford says, she would have borrowed the money from friends or family or gotten a better loan some other way.