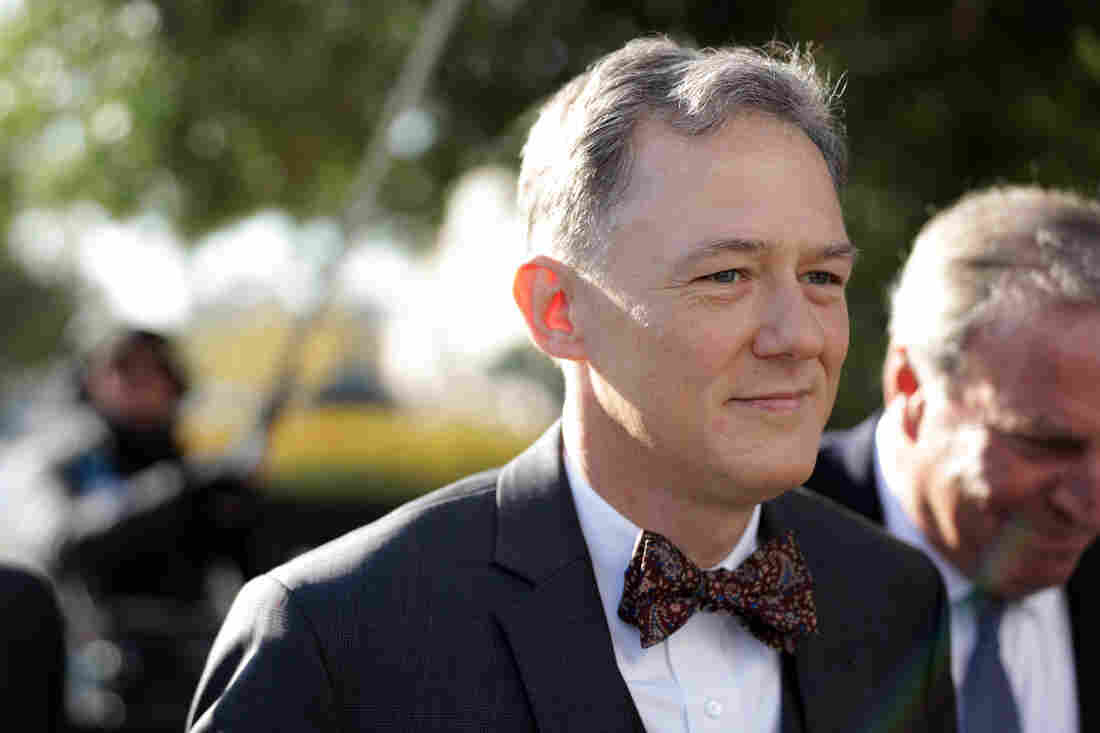 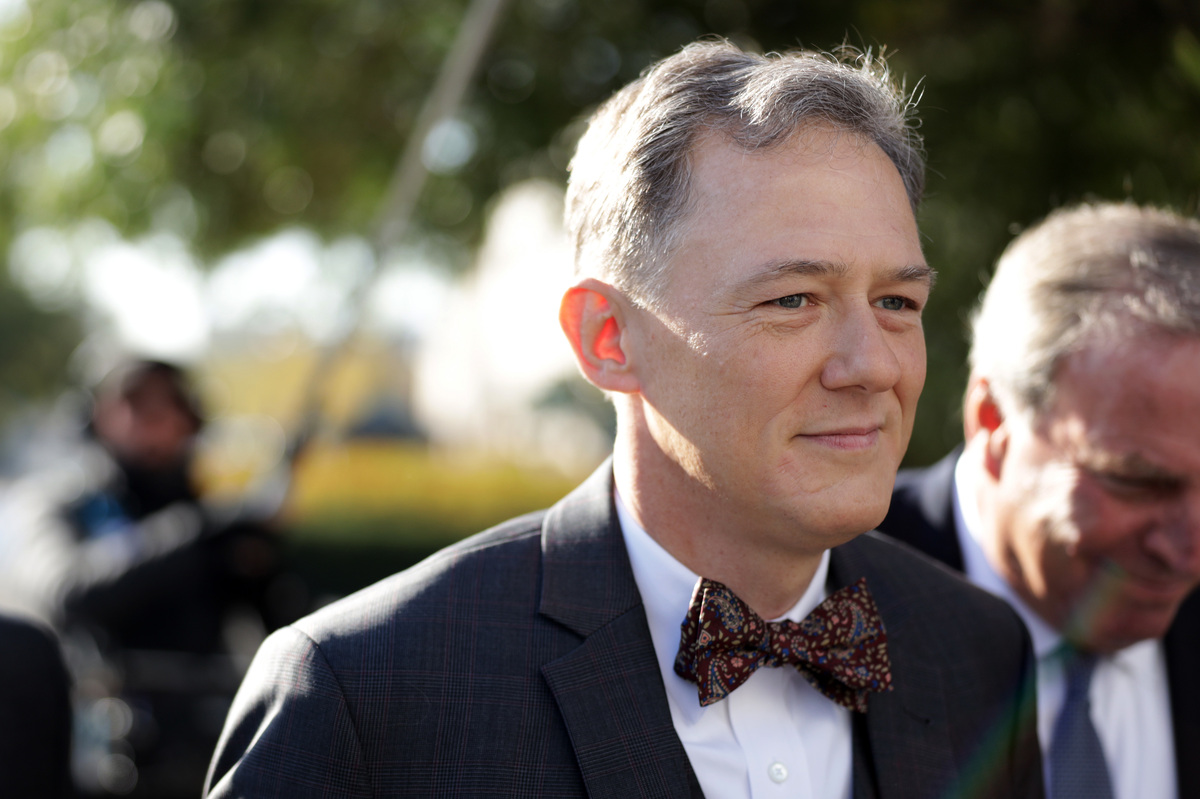 George Kent, deputy assistant secretary of state for European and Eurasian affairs, arrives at a closed session with House impeachment investigators on Oct. 15. Lawmakers released the transcript of that deposition on Thursday.

A top State Department aide questioned the legality of a U.S. president asking for an investigation into a political rival in his hours-long, closed-door deposition before congressional impeachment investigators.

"Politically related prosecutions are not the way of promoting the rule of law. They undermine the rule of law," said George Kent, deputy assistant secretary in the State Department's Bureau of European and Eurasian Affairs.

The House released a transcript of his deposition on Thursday. Read his full testimony here.

Kent's remarks bolster the accounts of other officials whose depositions have been made public and underscore the intense back-and-forth within the Trump administration over its Ukraine policy. The policy, as Kent described it, pitted the traditional bipartisan foreign policy consensus over U.S. relations with Ukraine, a fledgling post-Soviet state that needs Western support, against a parallel policy being advocated by Rudy Giuliani, the president's personal lawyer.

As Kent described it, Mick Mulvaney, the acting White House chief of staff, put a hold on aid to Ukraine at the president's direction.

"There was a lack of clarity" over the reason for the hold, Kent said.

In subsequent conversations with William Taylor, the charge d'affaires to Ukraine, he said he was told that President Trump "wanted nothing less than President Zelenskyy to go to microphone and say investigations, Biden, and Clinton."

In a news conference last month, Mulvaney dismissed the concerns of many of those testifying in the impeachment inquiry as "career bureaucrats" who "don't like President Trump's politics."

There's no evidence for that, however. Taylor, who has delivered some of the most scathing testimony of how the Ukraine affair was conducted, for example, was hand-picked by Secretary of State Mike Pompeo after Marie Yovanovitch was recalled from the post. Taylor served as Ukraine ambassador previously under Republican President George W. Bush.

Giuliani, Kent said, "had been carrying on a campaign for several months full of lies and incorrect information about Ambassador Yovanovitch, so this was a continuation of his campaign of lies."

Mulvaney said those upset with political influence in foreign policy should "get over it."

"Well, I have news for everybody — get over it," he said. "There is going to be political influence in foreign policy. ... Elections do have consequences, and they should, and your foreign policy is going to change. Obama did it in one way; we are doing it a different way. And there's no problem with that."

Previously, Taylor testified that he saw conflicting U.S. policies toward Ukraine being enacted at the same time. The "regular channel," as he called it, was trying to support Ukraine in its fight with Russia by promising military funding.

But the "irregular channel," led by Giuliani, was threatening to withhold funding and a meeting with Trump unless investigations into conspiracy theories that could help the president's reelection in 2020 were carried out.

Taylor testified that Trump and Giuliani wanted Ukraine to publicly state that it was looking into a conspiracy about the 2016 election and former Vice President Joe Biden's son, Hunter, who served on the board of a Ukrainian energy company.

Kent, however, described pressure exerted on Ukraine for its corruption during the Obama era as "a fiduciary responsibility for U.S. taxpayer dollars." He said linking aid to an investigation into the Bidens and the 2016 election was a different matter entirely.

"One might say national interest versus partisan interest," Kent said.

There has been zero evidence of wrongdoing by either Joe or Hunter Biden. But Hunter's serving on a board of a Ukrainian energy company at the same time that the then-vice president was a point person on Ukrainian affairs raised a flag for Kent at the time, he said.

"I raised my concerns that I had heard that Hunter Biden was on the board of a company owned by somebody that the U.S. Government had spent money trying to get tens of millions of dollars back and that could create the perception of a conflict of interest," Kent said.

Kent, though, said the issue didn't go any further, and he was told that Biden's son Beau "was dying of cancer, and that there was no further bandwidth to deal with family related issues at that time."

U.S. Ambassador to the EU Gordon Sondland, U.S. special envoy to Ukraine Kurt Volker and Energy Secretary Rick Perry were seen as more reliable actors in pressuring Ukraine to undertake the investigations that Giuliani was pushing.

Closed-door depositions continued on Capitol Hill this week amid the public transcript releases. An aide to Vice President Pence, Jennifer Williams, testified Thursday. Williams, a career foreign service officer assigned to Pence, was on the July 25 call between Trump and Ukrainian President Volodymyr Zelenskiy that helped spark the impeachment inquiry.

Trump, on that call, asked Zelenskiy to "do us a favor" and investigate the two conspiracy theories. Trump has repeatedly described the call as "perfect" and calls the House inquiry a "sham."