Accessibility links
Chicago Police Superintendent Eddie Johnson Announces Retirement Johnson spent more than three years as superintendent, during a turbulent time when the department was trying to restore the public's faith in police after the shooting death of Laquan McDonald. 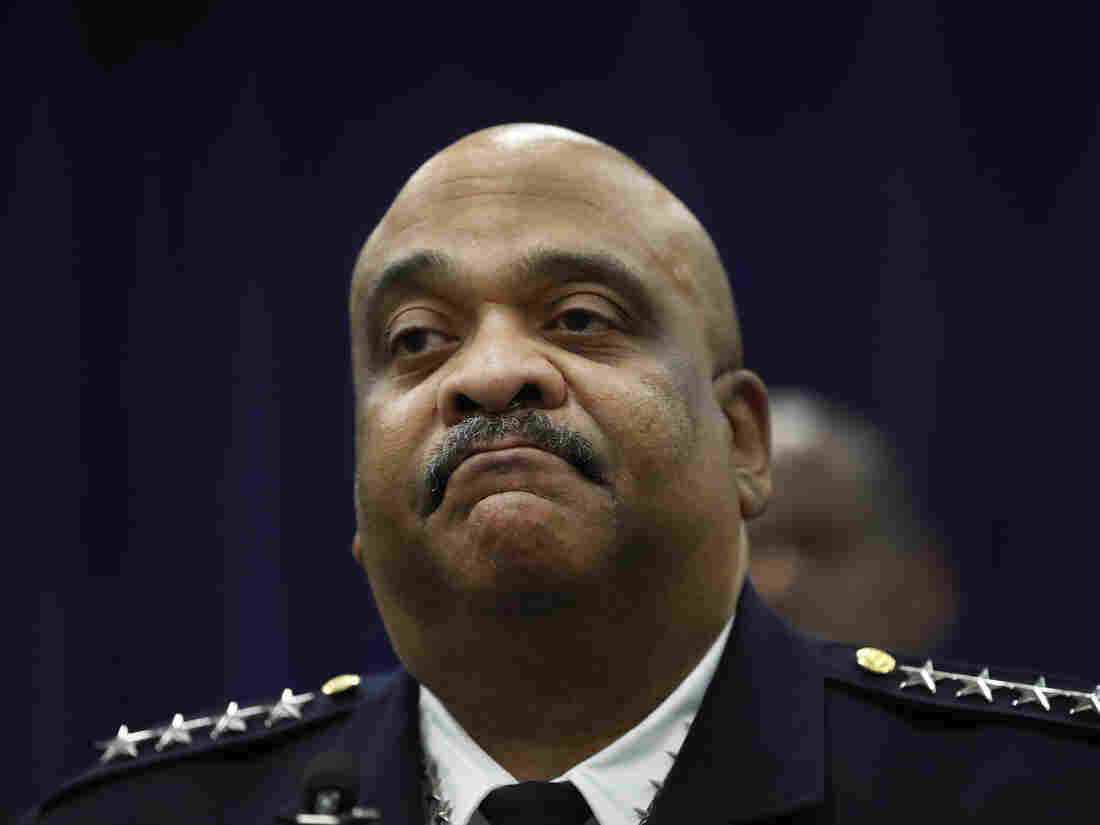 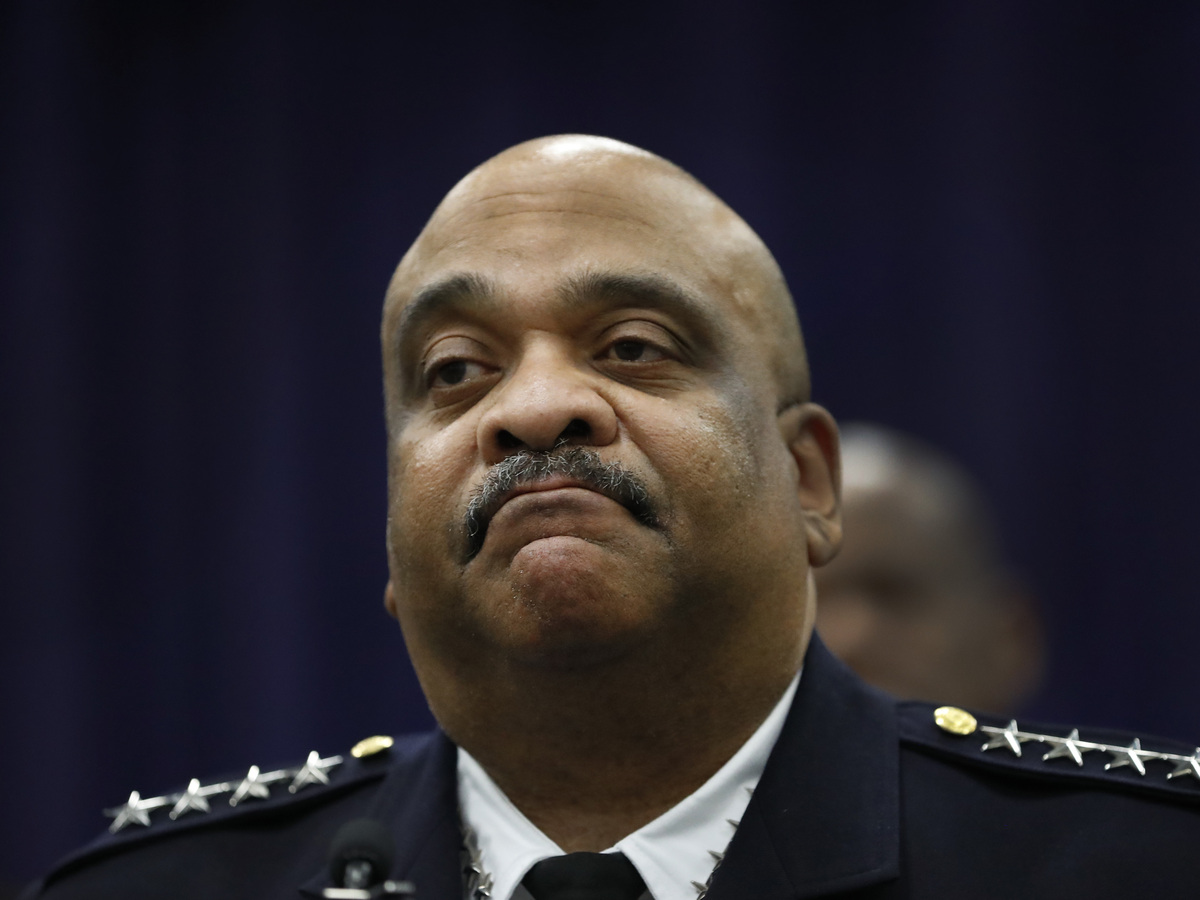 Chicago Police Superintendent Eddie Johnson is stepping down as the city's top law enforcement officer after more than three years, a tenure that began when his predecessor was removed in the wake of video footage showing a white police officer fatally shooting black teenager Laquan McDonald.

"It's time for someone else to pin these four stars to their shoulders," Johnson, 59, said as he announced his retirement at a news conference Thursday. "These stars sometimes feel like carrying the weight of the world."

Johnson led a department of some 13,400 officers, the second-largest force in the country, pushing for use-of-force training, more community policing and a court monitor to oversee department-wide reforms.

But Johnson's retirement, effective at the end of the year, also comes after he became embroiled in controversy.

Last month, police officers found Johnson asleep in his city-owned SUV at a stop sign. He initially said he had failed to take his blood pressure medication and felt lightheaded, but he reportedly later told the city's mayor he had consumed alcohol earlier that evening.

The city's inspector general's office is investigating why the officers allowed Johnson to drive home without having taking a sobriety test, according to NPR member station WBEZ.

Johnson did not comment on the investigation during the news conference.

A Chicago native who grew up in public housing and spent more than 30 years with the police force, Johnson was appointed to the top job by former Chicago Mayor Rahm Emanuel in 2016, as the city was in the grip of a surging murder rate from a wave of gun violence.

President Trump recently hurled insults at Johnson during a visit to Chicago, his first as commander in chief. Trump appeared at a conference of police chiefs to deliver a speech, which Johnson had skipped, saying, "I can't in good conscience stand by while racial insults and hatred are cast from the Oval Office, or Chicago is held hostage because of our views on New Americans."

After Johnson's first year in office, the city recorded thousands of shootings and 765 homicides — its highest toll in two decades.

The city's homicide rate remains one of the bloodiest in the nation, but the number of fatal shootings has waned after Johnson expanded the size of the police force and ramped up the use of a high-tech crime-fighting tool known as ShotSpotter, an acoustic detection system that helps locate the sounds of gunfire and sends live information to law enforcement.

"Superintendent Johnson will end his service standing on a record of reform and progress that will be felt long after his retirement," Lightfoot said at Thursday's news conference. "Accountability and community policing are more than just buzzwords to Eddie Johnson. They are the beliefs that guided his moral compass and helped unite the city after tragedies."

Johnson was also an advocate of police body cameras, which every patrol officer in Chicago has been outfitted with, an effort to help regain public trust after the 2014 killing of Laquan McDonald shook the city's confidence in police.

Shocking footage of McDonald's death sparked protests and led to a nearly 7-year prison sentence for Jason Van Dyke, the officer who fired 16 times at McDonald. It also spurred an investigation from the Department of Justice, which in a report accused Chicago's police department of a pattern of excessive force and civil rights violations.

"This tragedy forever changed Chicago," Johnson said Thursday. "Trust in the police department fell to the lowest that I've seen in my 31 years. Officer morale bottomed out," he said, noting that he invited critics ranging from Black Lives Matter activists to the Fraternal Order of Police to voice their concerns.

"Simply listening to them made all the difference in the world," Johnson said.

Scrutiny from Justice Department officials led to a settlement involving the appointment of a federal monitor to oversee wide-reaching reforms to Chicago's police department, an agreement known as a consent decree. Such court-ordered efforts have been reexamined during the Trump administration, which says it is prioritizing individual cases of police misconduct over investigating patterns of excessive force and other civil rights violations.

On Thursday, Johnson said the changes that have been underway the past nine months as part of the consent decree have made a difference.

"We've been able to make progress against every area of the consent area," Johnson said. "I expect this progress will continue for years to come and will help us become the model police department this city deserves."