Accessibility links
David Hasselhoff Is Still Big In Germany 30 Years After His Berlin Wall Show The Hoff recently sat down with NPR in Berlin and told the story of how he became a rock star there. 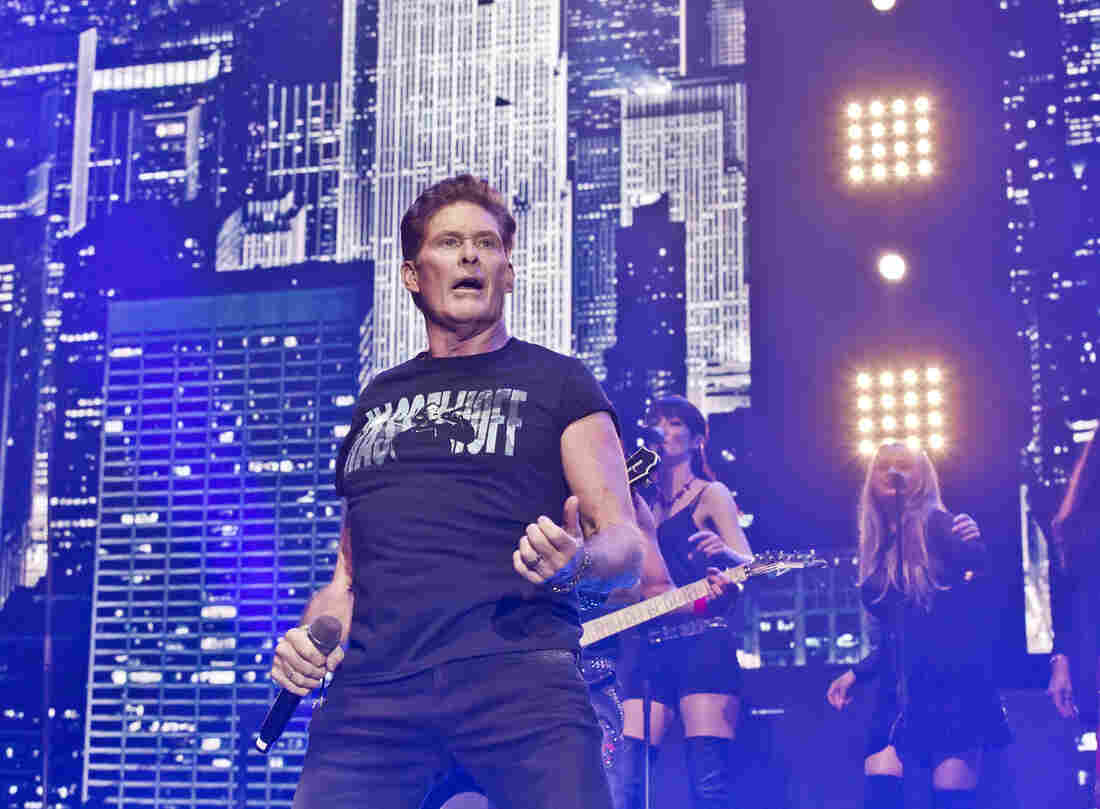 David Hasselhoff performs during a concert in Berlin on Oct. 3 — Germany Unity Day. In 1989, his song "Looking for Freedom" was the anthem to many Germans' newfound freedom. Frank Hoensch/Getty Images hide caption 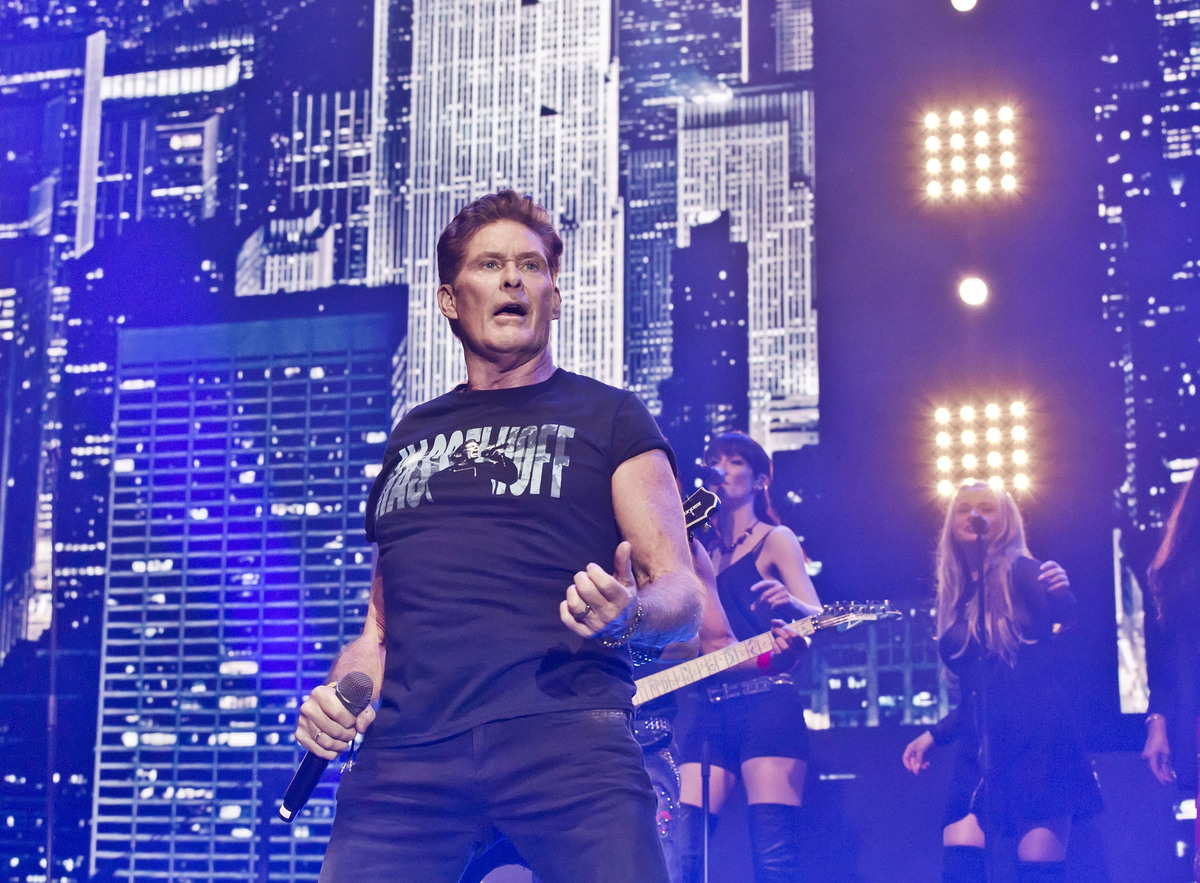 David Hasselhoff performs during a concert in Berlin on Oct. 3 — Germany Unity Day. In 1989, his song "Looking for Freedom" was the anthem to many Germans' newfound freedom.

The 67-year-old star of decades-old television series Knight Rider and Baywatch doesn't skip a beat when asked the question.

"It all started with a girl named Nikki," Hasselhoff said during a recent interview with NPR in Berlin, where he was on a concert tour of Germany.

It was 1985. Hasselhoff's agent told him that Nikki had won a contest in a magazine and her prize was lunch with Hasselhoff at his home in Southern California. He remembers groaning, not wanting to go through with it. "I said [to the agent], 'I'm going through my Ernest Hemingway period.' Knight Rider was canceled; I lost my marriage. I'm sitting here staring out the window going, 'What am I going to do next?' " he said. 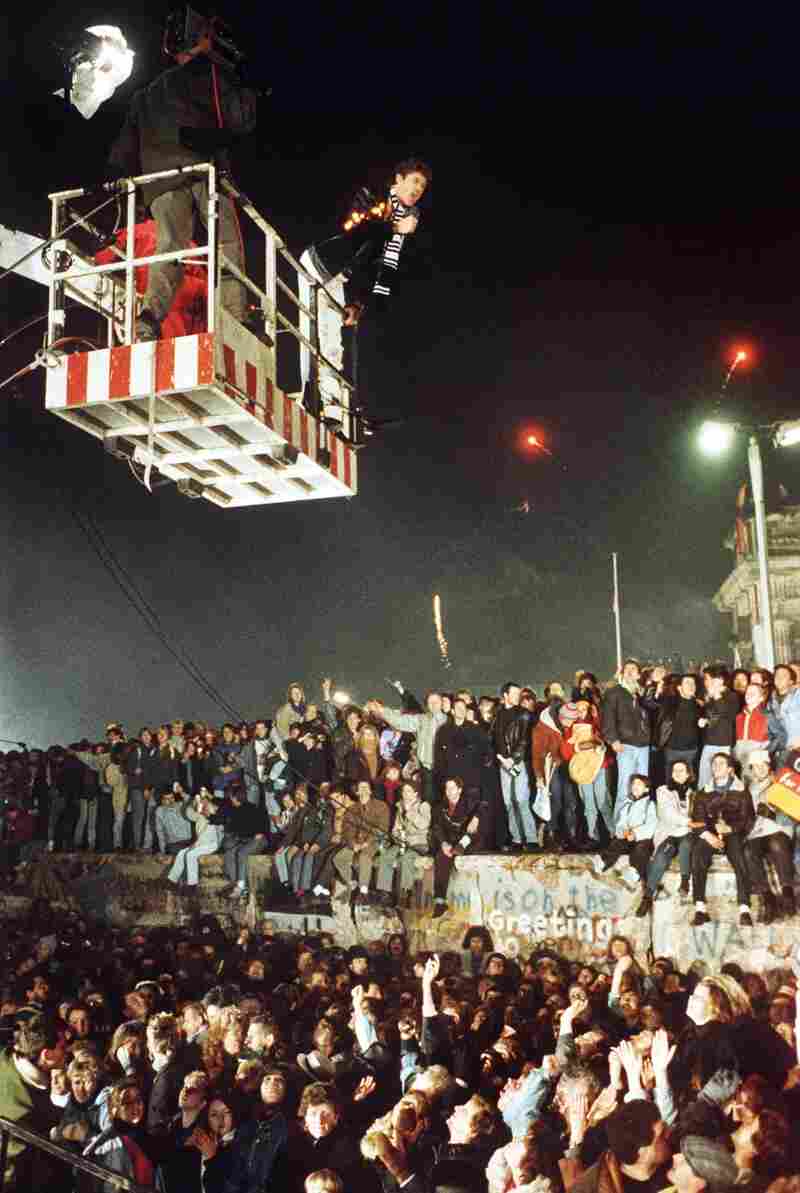 David Hasselhoff hovers in the cage of a hoisting crane above the Berlin Wall and sings "Looking for Freedom" on Dec. 31, 1989. Wöstmann/picture alliance via Getty Images hide caption 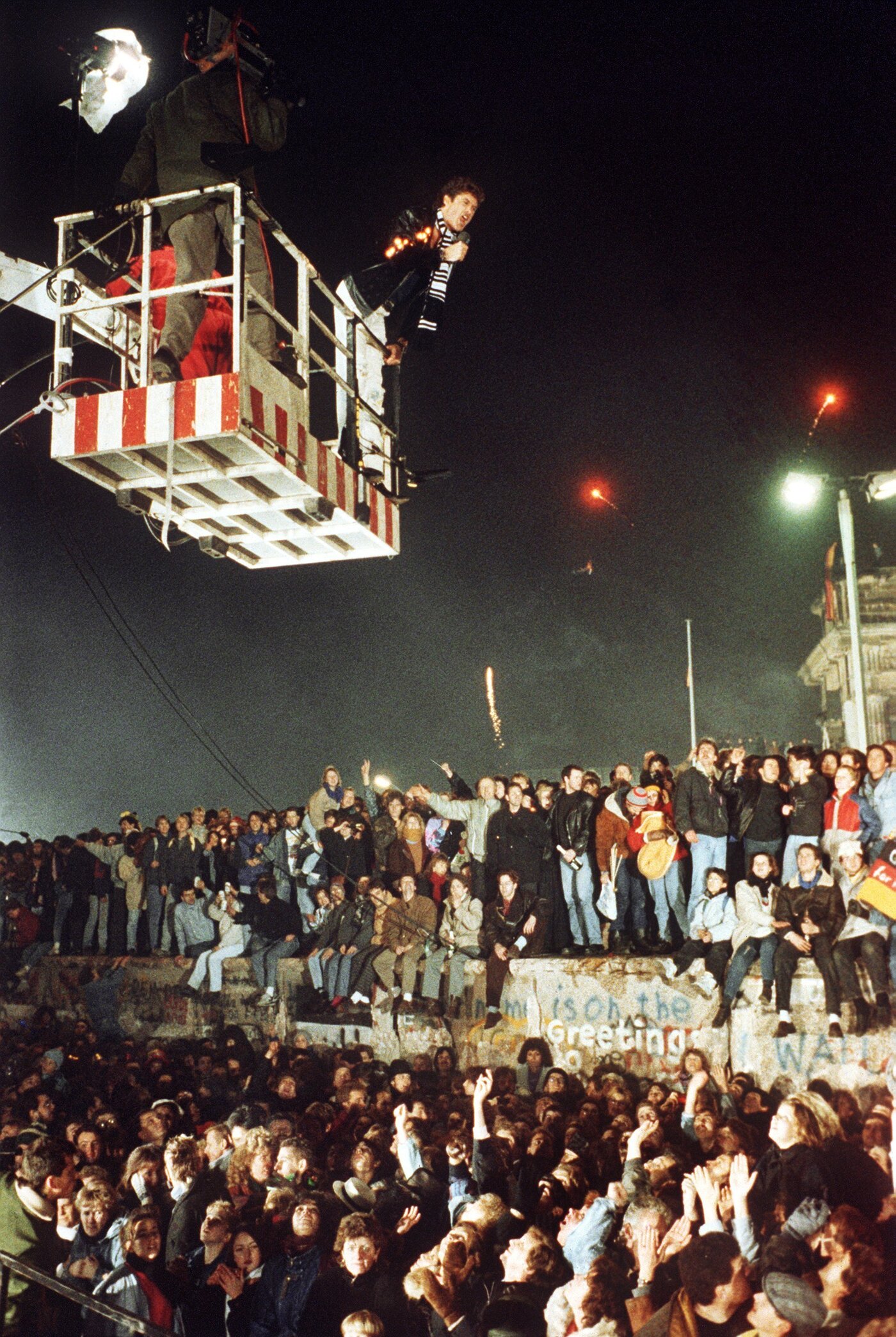 David Hasselhoff hovers in the cage of a hoisting crane above the Berlin Wall and sings "Looking for Freedom" on Dec. 31, 1989.

Darkening his Hemingway period were tepid U.S. sales of his debut rock album earlier that year. Hasselhoff needed a pick-me-up. So when Nikki ultimately came knocking, he reluctantly let her in. "And she went, 'Oh, it's very nice to meet you. Your album, Night Rocker, is No. 1 in my country,' " Hasselhoff recalled her saying. "I went, 'Where's your country?' And she said, 'Austria.' I said, 'Oh wow! Where is Austria?' "

Nikki showed him on a world map, and Hasselhoff went straight to work. He called the magazine that had given her the prize and asked it to suggest a concert promoter.

Within weeks, Hasselhoff was selling out concerts in Austria, and soon his album was topping the pop music charts in Germany and Switzerland too. But it was the title track of another Hasselhoff album, Looking for Freedom, a few years later that cemented his magnetic appeal to young Germans.

The song, which was based on an older German favorite, "Auf Der Strasse Nach Süden," begins with Hasselhoff crooning:

The drums kick in and, with it, the chorus:

The album was released in 1989, a pivotal year for the spread of democracy through Europe: In June of that year, Poland held its first free elections; in November, the Berlin Wall fell. Communist East Germany was about to crumble. Among Germans, Looking for Freedom was the anthem to their newfound freedom.

Hasselhoff's album went triple platinum in Europe. At the time, it seemed like everyone in Germany knew the title track.

Soon after the Berlin Wall fell, Germany's Silvester Show — similar to The Dick Clark Show in the U.S. — invited Hasselhoff to sing "Looking for Freedom" on its 1989 New Year's Eve special, planned to be filmed inside a hotel. "I said, 'No. Only if I can sing on the Berlin Wall,' " Hasselhoff said.

He now admits this was a ridiculous request, but the German show agreed to it. On New Year's Eve of 1989, Hasselhoff sang his anthem for freedom while hoisted by a crane above the Berlin Wall to an estimated half a million Berliners.

"I grew up with the idea that he was responsible for breaking down the wall," remembers 36-year-old fan Thomas Erdmann. 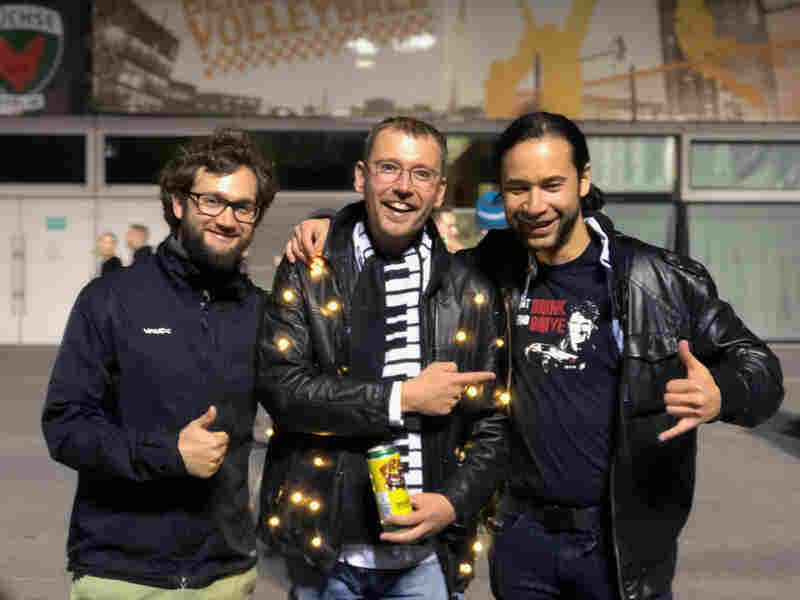 Thomas Erdmann (center) poses with friends before attending David Hasselhoff's concert in Berlin on Oct. 3. Erdmann spent hours constructing a replica of the jacket his boyhood hero wore while singing at the Berlin Wall in 1989. Erdmann, who was raised in East Berlin, believed that Hasselhoff was responsible for the fall of the wall. Rob Schmitz/NPR hide caption 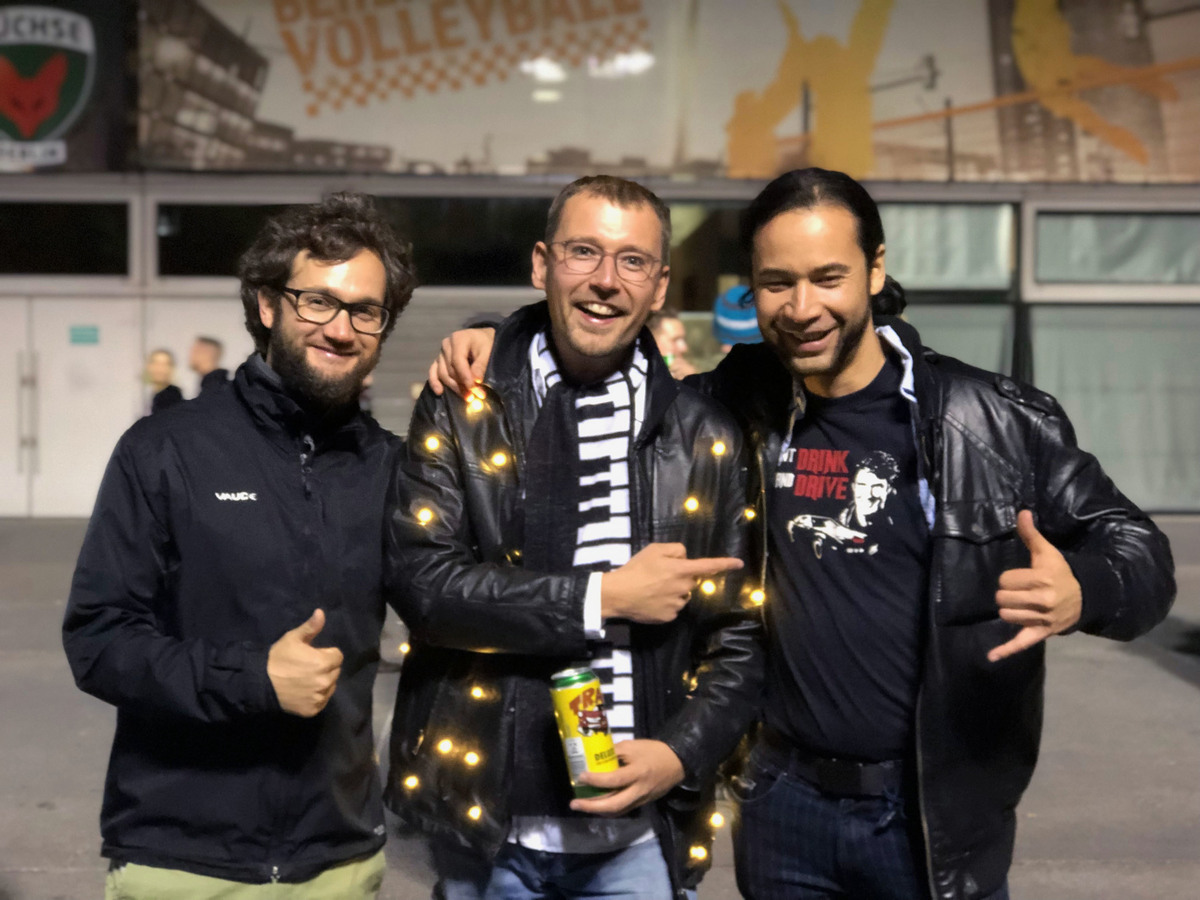 Thomas Erdmann (center) poses with friends before attending David Hasselhoff's concert in Berlin on Oct. 3. Erdmann spent hours constructing a replica of the jacket his boyhood hero wore while singing at the Berlin Wall in 1989. Erdmann, who was raised in East Berlin, believed that Hasselhoff was responsible for the fall of the wall.

Erdmann was 6 when the wall fell, too young to understand that his favorite TV star who drove a talking car was not responsible for the fall of communism in his country.

Thirty years later, on Oct. 3, German Unity Day, Erdmann was waiting to see his boyhood hero in concert at an arena in Berlin. He was dressed in a piano scarf and a black leather jacket that had blinking lights sewn onto it — a replica of what Hasselhoff wore for his memorable 1989 New Year Eve's appearance in Berlin. Erdmann said he spent 10 hours sewing on the lights the night before. For him, Hasselhoff conjures up memories of growing up in East Berlin, a block away from a wall that separated him and his friends from the freedoms of the West. "I remember this one drain hole in the wall, and we used to look through that drain hole to see the West," Erdmann remembered.

At this show, freedom was no longer a fleeting vision through a drain hole. Instead, freedom was right in front of thousands of screaming fans, singing along to an assortment of covers of songs by bands like Whitesnake, The Jesus and Mary Chain and Neil Diamond while shouting "Freedom!" repeatedly during guitar solos.

Hasselhoff could not seem to get enough during his three-hour concert. "Thirty years of freedom!" he yelled to his fans after emerging from a hydraulic stage in the middle of the arena. "Hello, Berlin! Ich bin ein Berliner!" he said — meaning "I'm a Berliner," an echo of President John F. Kennedy's famous 1963 speech.

At times during the marathon performance, Hasselhoff appeared more excited about the 30th anniversary of the fall of the wall than the assembled Berliners themselves, who have moved on since then.

But in the end, The Hoff knows his audience. His last song of the encore was, predictably, "Looking for Freedom," and it brought all audience members to their feet, clapping and singing, happy that Hasselhoff was still there to remind them that, in the words of his song, "the search goes on."